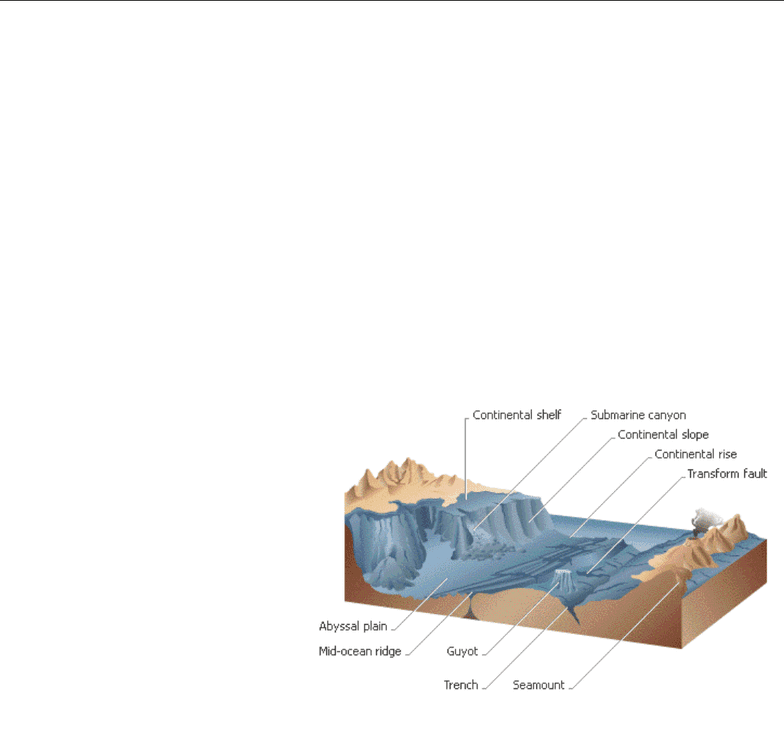 1
OCEAN 100 LAB 2 INVESTIGATION: PLATE TECTONICS
LEARNING OUTCOMES:
A. Identify major geographic examples and features resulting from differing plate tectonic boundaries.
Interpret patterns in topography, earthquakes and volcanoes as the result of plate tectonic processes
B. Assess seafloor spreading based on oceanic crust age pattern. Calculate average production of oceanic
crust given radiometric age and distance from divergent plate boundary.
C. Assess oceanic hot spots track, age correlation and what that tells us about plate motion.
D. Interpret mid-oceanic ridges to further understand the difference between Fracture Zones vs Transform
Faults.
INTRODUCTION
The ocean floor contains a diverse array of features including relatively shallow and flat continental
shelves, gently sloping continental slopes, deep and vast abyssal plains, deeper trenches, elevated seamounts,
and meandering elevated ridges (Figure 1). How do these features relate to one another as well as to land-based
features such as rift valleys and mountain chains? What common processes, if any, are responsible for them?
These and many other questions are well explained through the theory of plate tectonics. The initial seed for
this theory came from the German meteorologist Alfred Wegener, who considered the jigsaw-puzzle fit
between South America and Africa as well
as similar types of rocks and fossils shared
by the margins of these continents with
India, Australia, and Antarctica. Inspired
by these and other observations, in 1915
Wegener published his hypothesis of
continental drift, which predicted that the
continents were once assembled as a single
“super-continent” and had since slowly
drifted through oceanic crust to their
current positions. Wegener’s radical
hypothesis caused a considerable stir
within the scientific community, but was
largely refuted because no feasible
mechanism existed to move massive solid
continents through solid oceanic crust.
The idea of continental movement
over the Earth’s surface remained largely
dormant until the 1950s, when technological advances fueled by World War II and the subsequent cold war
produced detailed bathymetric maps of ocean basins, located extremely deep earthquakes near trenches, and
measured anomalously high heat flow along oceanic ridges. In the early 1960s, these and other observations
inspired a new hypothesis of sea-floor spreading: As oceanic crust spread apart molten material rose from the
Earth’s interior to form new oceanic crust along oceanic ridges. Presence of earthquakes along the trenches
represents friction between two crusts as the older denser oceanic crust sinking back into the Earth’s interior
and slides past the overlying plate. This hypothesis passed a wide variety of tests, and has been and continues to
be refined and synthesized as new technology allows for new discoveries and additional hypotheses into the
theory of plate tectonics.
It is important to understand the difference between a hypothesis and theory: A hypothesis is any
testable idea that could potentially be false, whereas a theory is a structure of ideas that explains a wide range
of observations that have been tested numerous times. Thus, theories develop from our broader scientific
Figure 1. Exaggerated figure depicting bathymetric features that
result from plate tectonic processes.
Unlock document 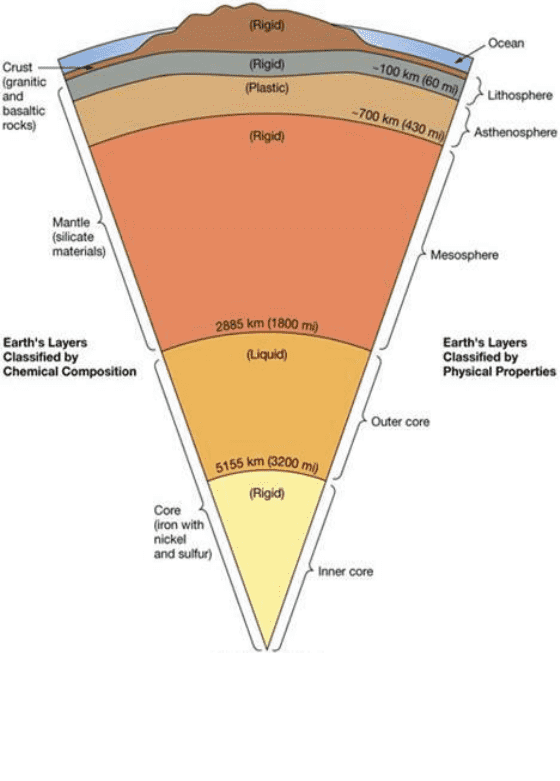 2
understanding, which in turn evolves from the testing of many diverse hypotheses, each fairly specific in nature.
So, when someone discounts something as “just a theory,” a more accurate phrasing would be “just a
hypothesis,” but only if the idea can be both rigorously tested and potentially false! Theories continue to be
modified and refined over time as the scientific process improves our understanding of the natural world. A
given theory need not explain all associated observations.
PLATE TECTONIC THEORY – AN OVERVIEW
The Earth’s interior can be subdivided into concentric layers based on either composition (i.e.,
elements, minerals, rocks) or behavior (i.e., rigid, plastic, or liquid response to an applied force) (Figure 2).
Note that these compositional and behavioral subdivisions do not necessarily coincide with one another. For
example, the rigid lithosphere consists of the
outermost ~100 km of the Earth, but changes in its
composition from continental or oceanic crust
into mantle at relatively shallow depths.
Conversely, the mantle changes in its behavior with
increasing depth, temperature, and pressure from
rigid lithosphere to plastic asthenosphere. If this
were a geology course, we would spend much more
time on a more complete exploration of the Earth’s
interior, including “how we know what we know.”
However, we want to get to the oceans as soon as
feasible, so will focus here on the uppermost layers,
specifically the lithosphere and asthenosphere.
The lithosphere consists of rigid plates that
fit together like pieces of a spherical jigsaw puzzle,
and these plates move relative to one another at
typical velocities of centimeters per year (e.g.,
about the rate at which your fingernails grown;
Figure 3). While such velocities may not seem
impressive, appreciate that well over a
100,000,000,000,000 (1015) kilograms of solid rock
are in global motion, and that a given plate can
move tens of kilometers over a million years! Such
major motion among massive rigid plates raises
three fundamental questions that are effectively
answered through plate tectonic theory:
(1) How can rigid plates move relative to
one another? The key concept for answering this
question is to appreciate that the shapes of
lithospheric plates are not constant, but change through time as new lithosphere is accreted or added along some
plate margins and old lithosphere is removed from the surface along other plate margins. As a result, adjacent
plates will share one of three basic types of plate boundaries, which are often classified on the basis of their
relative motion or dominant processes affecting their margins (Table 1; Figure 4). In light of these three plate
boundaries, examine the current direction of the Pacific plate in Figure 3: What types of plate boundaries would
you predict along the edge of the Pacific plate? What under water features would you expect to observe at these
plate boundaries? Revisiting our initial analogy of lithospheric plates as pieces of a spherical jigsaw puzzle,
imagine observing the Earth through geologic time: Individual plate “pieces” would continually change shape
and position, but always fit together, and produce an ever-changing “puzzle picture” of oceans being born by
Figure 2: Cross-section illustrating two ways to subdivide
the Earth’s interior based on depth-related changes in
composition (left side; e.g., elements, minerals, rocks) or in
behavior (right side; i.e., how the layer responds to a given
force; e.g., brittle, plastic, or liquid).
Unlock document

Already have an account? Log in
3
continental rifting (e.g., the Red Sea today), growing larger through seafloor spreading (e.g., the Atlantic Ocean
today), and shrinking through subduction (e.g., the Pacific Ocean today).
(2) What drives plate motion? These global plate motions and plate boundary phenomena appear to be
driven by a complex combination of global convection of the asthenosphere (as driven by heat released from
radioactive decay in the deep Earth) and regional forces acting on different portions of different lithospheric
plates (Figure 4). These regional forces include (1) buoyancy-driven “asthenospheric push” outwards as
magma rises along divergent plate boundaries (pushing plates apart), (2) gravity-driven “lithospheric slide”
down the elevated flanks of divergent plate boundaries, (3) gravity-driven “lithospheric pull” as plates become
more vertical with depth at convergent plate boundaries (one plate pulled under another plate), and (4) traction-
driven “lithospheric suction” from potential breaking off subducted sections of lithosphere that then entrains
both lithospheric plate margins towards the convergent plate boundary. The relative importance of these
different driving processes is an area of active scientific investigation and debate. For example, while most
scientists consider asthenosphere convection to be the primary driving process, some hypothesize asthenosphere
convection is actually the net result of these regional forces on a global scale.
(3) How is plate motion related to earthquakes? Earthquakes are the release of accumulating elastic
strain within the lithosphere through essentially instantaneous motion along some fault surface. The exact three-
dimensional location where an earthquake starts is termed its focus, while the directly overlying surface
location is termed its epicenter (i.e., what is typically shown on surface maps of earthquake locations). The size
of an earthquake is reported using the Richter magnitude, which scales the intensity of ground shaking from
M2 to M10, with each higher number representing ten-times more intense ground shaking (e.g., a M3 is ten-
times more intense than a M2, whereas a M4 is a hundred-times more intense than a M2). Smaller earthquakes
are much more frequent than larger earthquakes: An average of ~1,000,000 earthquakes occur each year, while
M8 earthquakes only occur every three to ten years. The vast majority of earthquakes are closely associated
with plate boundaries, and this distribution is entirely consistent with plate tectonic theory: At divergent plate
boundaries, the cooling, contracting, and fracturing of new lithosphere produces relatively “shallow-focus” (~0-
30 km deep) earthquakes along ridges/rises as well as the associated transform faults that connect ridge/rise
segments. At convergent plate boundaries, fracturing of the subducting lithosphere produces earthquakes with
foci as deep as 700+ kilometers (Figure 4). At conservative (transform) plate boundaries, the edges of adjacent
plates catch and accumulate stress that is episodically released as relatively shallow-focus (~0-30 km deep).
HOT SPOTS – MAGMA PLUMES FROM THE DEEP MANTLE
While the above aspects of plate tectonic theory effectively explain many features and phenomena
associated with plate boundaries, they do not explain the numerous underwater seamounts and volcanic islands
frequently found within the interiors of lithospheric plates. These bathymetric (underwater) features can be
relatively isolated (e.g., Kerguelen Plateau in the Indian Ocean) or form distinct chains or arcs across the
planet’s surface (e.g., Hawaiian Islands and Emperor Seamount Chain in the North Pacific Ocean). Such
features are the result of hot spots, where rising plumes of asthenosphere melt through the overlying lithosphere
and erupt as magma on the ocean floor, in some cases building up high enough to breach the ocean surface and
form volcanic islands.
Over a hundred such hot spots have left their mark upon the global ocean floor, often as a chain or arc of
inactive seamounts and volcanoes that generally share two common patterns: (1) increasingly older radiometric
ages with increasing distance from the active hotspot and (2) a parallel orientation between the current direction
of plate motion and the path of hot spot activity over the past couple million years. As a result, scientists
hypothesized that hot spots are relatively “fixed” in their position, and therefore attributed these patterns to
movement of the overlying lithospheric plate over time. Recent testing of this hypothesis indicates that hot spots
may also slowly migrate in their position, but this is still on time scales that are much slower than the motion in
the overlying lithospheric plates. So, for all purposes, plates move much faster than hot spots and mantle plumes
will ever do.
Unlock document