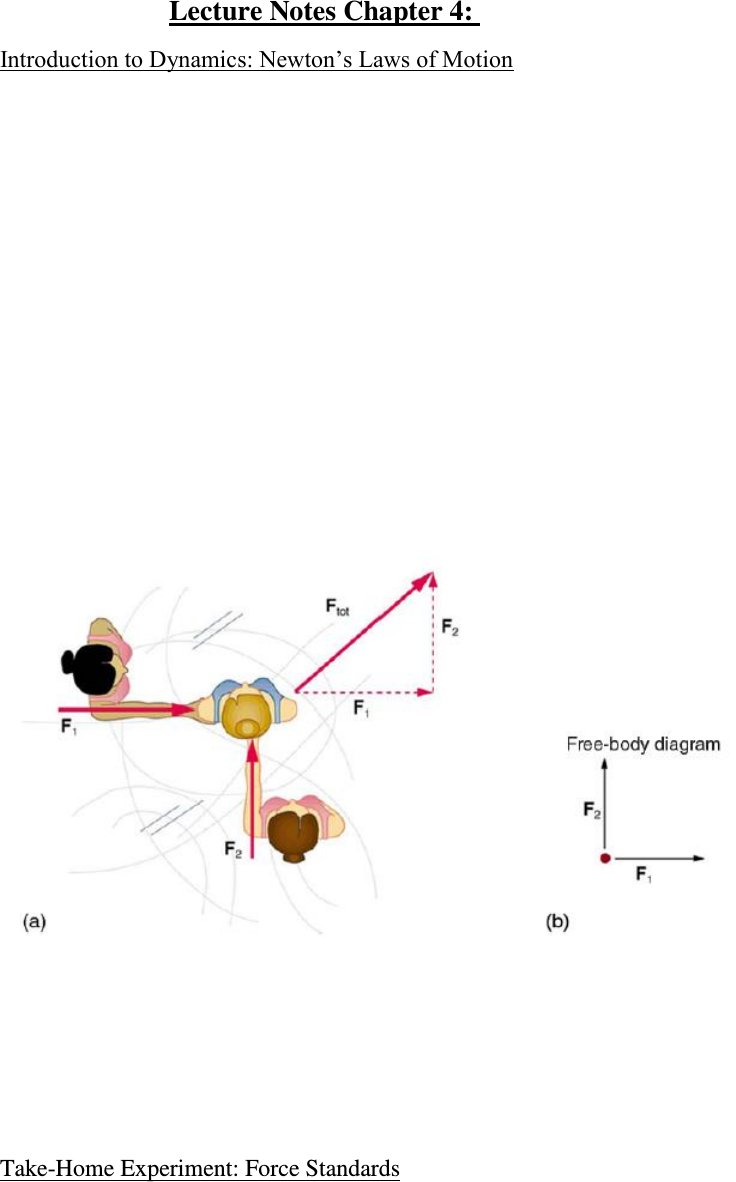 Lecture Notes Chapter 4: Forces & Newton’s Laws
Introduction to Dynamics: Newton’s Laws of Motion
 The study of motion is kinematics, but kinematics only describes the way objects move –
their velocity and their acceleration.
 Dynamics considers the forces that affect the motion of moving objects and systems.
 Galileo was instrumental in establishing observation as the absolute determinant of truth,
rather than “logical” argument.
4.1 Development of Force Concept
 Dynamics is the study of the forces that cause objects and systems to move.
 Force is defined as a push or pull, which has both magnitude and direction, therefor it is a
vector.
 Since force is a vector, it adds just like other vectors.
(b) Free-body diagram is a technique used to illustrate all the external forces acting on a body.
 The body is represented by a single isolated point (or free body), and only those forces
acting on the body from the outside (external forces) are shown – these forces are the
only ones shown, because only external forces acting on the body affect its motion.
Take-Home Experiment: Force Standards, p. 131
To investigate force standards and cause and effect, get two identical rubber bands.
Unlock document 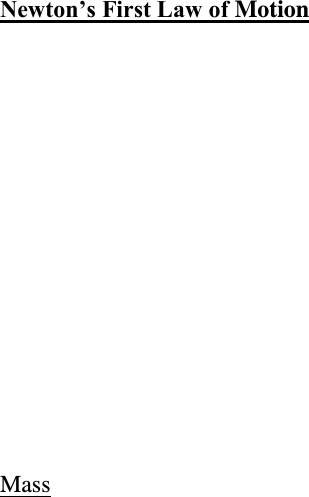 Hang one rubber band vertically on a hook. Find a small household item that could be attached
to the rubber band using a paper clip, and use this item as a weight to investigate the stretch of
the rubber band.
Measure the amount of stretch produced in the rubber band with one, two, and four of these
(identical) items suspended from the rubber band.
What is the relationship between the number of items and the amount of stretch?
How large a stretch would you expect for the same number of items suspended from two rubber
bands?
What happens to the amount of stretch of the rubber band (with the weights attached) if the
weights are also pushed to the side with a pencil?
4.2 Newton’s First Law of Motion: Inertia
 Define mass and inertia
 Understand Newton’s first law of motion.
Newton’s First Law of Motion
A body at rest remains at rest, or, if in motion, remains in motion at a constant velocity unless
acted on by a net external force.
 We can think of this law as preserving the status quo of motion.
 This law states that these must be a cause (which is a net external force) for there to be
any change in velocity (either a change in magnitude or direction).
An object sliding across a table or floor slows down due to the net force of friction acting on the
object. If friction disappeared, would the object still slow down?
 The idea of cause and effect is crucial in accurately describing what happens in various
situations.
 The object would not slow down at all if friction were completely eliminated.
 If we know enough about the friction, we can accurately predict how quickly the object
will slow down. Friction is an external force.
Mass
The property of a body to remain at rest or to remain in motion with constant velocity is called
inertia.
 Newton’s first law is often called the law of inertia.
 The inertial of an object is measured by its mass.
 Mass is a measure of the amount of matter in something.
 Unlike weight, mass does NOT vary with location.
Unlock document 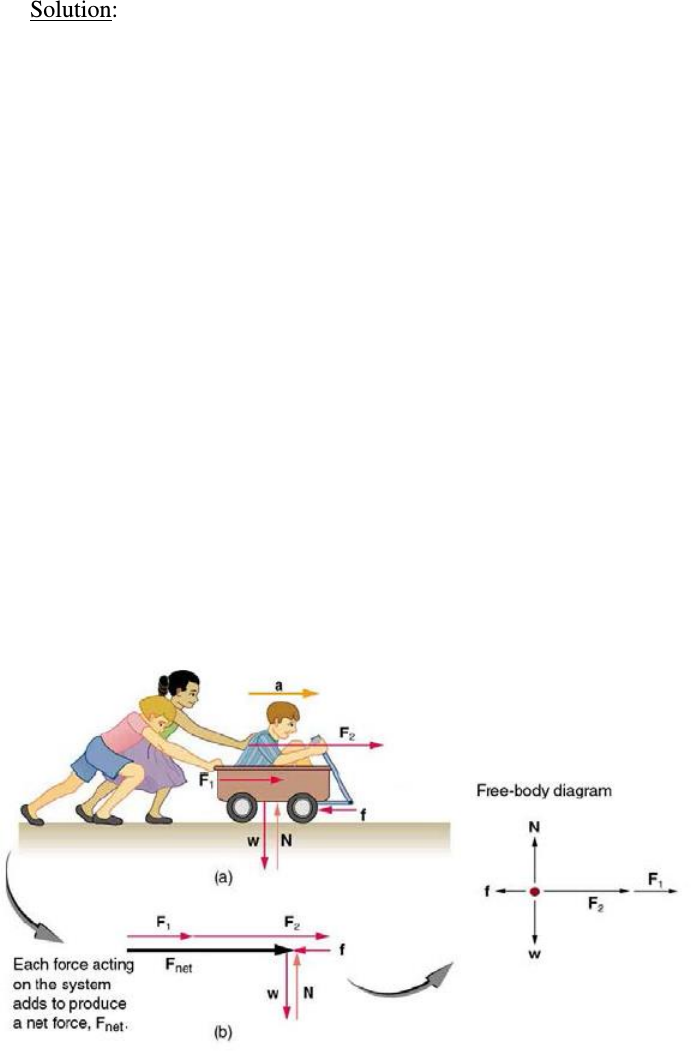 CHECK YOUR UNDERSTANDING
Which has more mass: a kilogram of cotton balls or a kilogram of gold?
Solution: They are equal. A kilogram of one substance is equal in mass to a kilogram of another
substance. The quantities that might differ between them are volume and density.
4.3 Newton’s Second Law of Motion: Concept of a System
 Define net force, external force, and system.
 Understand Newton’s second law of motion.
 Apply Newton’s second law to determine the weight of an object.
A change in motion is equivalent to a change in velocity.
 A change in velocity means, by definition, that there is an acceleration.
 Newton’s first law says that a net external force causes a change in motion; thus, a net
external force causes acceleration.
What do we mean by an external force? An external force acts from outside the system of
interest.
 Only external forces affect the motion of a system, according to Newton’s first laws
 Different forces exerted on the same mass produce different accelerations. (The internal
forces actually cancel.)
 You must define the boundaries of the system before you can determine which forces
are external.
(a) The system of interest
is the wagon plus the
child in it.
 The two forces
exerted by the other
children are external
forces.
 The force the child in
the wagon exerts to hang
onto the wagon is an
internal force between
elements of the system of
interest.
 The weight W of the
system and the support of the ground N are assumed to cancel.
 The vector f represents the friction action on the wagon, and it acts to the left,
opposing the motion of the wagon.
(b) All of external forces acting on the system add together to produce a net force, Fnet.
Unlock document