What is the main objective of organizational change framework?

D)strategy relates broadly to a company's competitive moves and business approaches (regardless of the financial outcomes it produces) while the term business model relates to whether the revenues and costs flowing from the strategy demonstrate that the business is viable from a profit perspective.

Using conditioning theory as your guide, why was the training program not more effective?

1) The conditioning process emphasizes the importance of consequences of behaviour—in this case, there did not seem to be any consequence (positive or negative) to the supervisors learning or applying what they were supposed to learn in their training.

2) The conditioning process emphasizes the importance of consequences of learning. In this case, there did not seem to be any consequence (positive or negative) to the supervisors performance.

3) The conditioning process emphasizes the importance of consequences of performance—in this case, there did not seem to be any consequence (positive or negative) to the supervisors performance.

4) The conditioning process emphasizes the importance of consequences of cost—in this case, there did not seem to be any consequence (positive or negative) to the reward model.

How could the program be improved by using some of the concepts, principles, and components of conditioning theory?

1) Consequences for applying the skills acquired (positive or negative reinforcement) might have improved the training outcomes significantly.

2) Positive role modelling might have improved the training outcomes significantly.

4) A thorough organizational analysis might have improved the training outcomes significantly.

Nurse supervisors at a large hospital seldom conducted performance appraisal interviews and some refused to do them. They complained that there was no time to meet with every nurse, and that it was a difficult, time-consuming, and unpleasant process that was a big waste of time. Some were uncomfortable with the process and found it to be stressful for everybody involved. They said it caused a lot of anxiety for them and the nurses.

However, the administration was in the process of introducing a new model of nursing that required all nurses to perform certain critical behaviours when interacting with and counselling patients and their families. It was therefore imperative that performance appraisals be conducted to ensure that nurses were implementing the new model of nursing and performing these critical behaviours.

The nurse supervisors would be required to evaluate their nurses’ performance every six months and then conduct a performance appraisal interview with each nurse in which the previous six months’ performance would be discussed. An action plan would then be developed with specific goals for improvement.

The administration decided to hire a performance management consultant to provide a one-day workshop on how to conduct performance appraisals for all nurse supervisors. The training program was mandatory and all nurse supervisors had to attend. Many of them did so reluctantly, complaining that it would be a waste of time and that it would not make any difference in how things were done in the hospital.

After the lecture, the trainees were asked to participate in a role play in which they would take turns playing the part of a supervisor and an employee. They were provided with information about a nurse’s job performance to discuss in the role play and then develop an action plan. However, some of the trainees left the session, refusing to participate. Others did not take it seriously and made a joke out of it. There was a lot of laughing and joking throughout this part of the program. After the role play there was a group discussion about the role play followed by a review of the key points to remember when conducting performance appraisal interviews.

Although the supervisors were supposed to begin conducting performance reviews and interviews shortly after the training program, very few actually did. Some said they tried to do them but could not find time to interview all of their nurses. Others said that they followed the consultant’s guidelines but they did not see any improvement in how they conducted interviews or in how nurses reacted to them. Some said it continued to be a stressful experience that was uncomfortable for them and the nurses, so they decided to stop doing them.

One year later, performance appraisals were still a rare occurrence at the hospital. Furthermore, many of the nurses were not practising the new nursing model and, as a result, nursing care and performance were inconsistent throughout the hospital and often unsatisfactory. 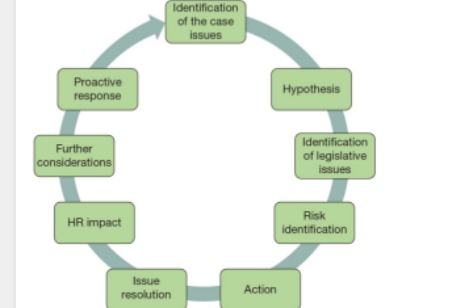 Using the above thought cycle as a guide, we are able to consistently analyze the case study: