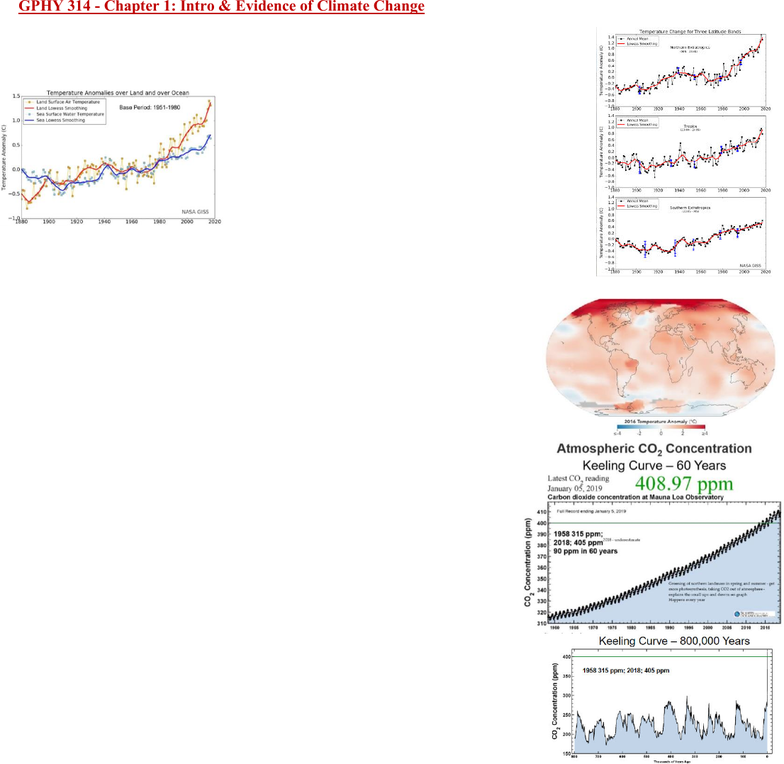 GPHY 314 - Chapter 1: Intro & Evidence of Climate Change
Global Temp Anomalies/ Trends
- Graph: Temp Anomalies Land vs. Ocean
Due to thermal capacity, ocean doesn’t warm or cool as
much as land. It is slower to respond to changes than
land.
Response time: The amount of time it takes for the
climate system to FULLY react to a change in the
forcings. atmosphere > ocean surface > ice sheets
Slower: Ocean surface
Slowest: Ice sheets
- Graph: Temp Change for Three Latitude Bands
o Dramatic rise in temp for northern extratropics bc it’s primarily land
o Bw tropic of Cap. and tropic of Cancer (22.5N – 22.5S); tropics
aren’t dramatically fluctuating as other latitudes
o Southern extratropics have the most gradual- less dramatic
fluctuations bc there is more water than land
- Graph: Global Temp Anomalies (based on temp comparisons to the
baseline avg of 1951-1980)
o Most dramatic temp change at Artic
o 0.8C change globally – different for every place on the planet
o Change isn’t uniform – it varies with latitude!
o We are likely underestimating change up at the artic bc there
are not many measuring stations up there
- Graph: Keel Curve (60 yrs & 800,000 yrs)
o Measurement of conc. of CO2 in the atmp made on the slope
of Hawaii Mauna Loa volcano since 1958 – longest running
monitoring of natural system.
▪ Seasonal CO2 conc rises in the winter and falls in the
summer bc of photosynthesis (plants take up CO2) in
spring and summer and release of carbon in fall and
winter
▪ In 2019 we’re at 408.97ppm, which is an underestimate.
If it hits 500ppm there will be no more ice left which
means 70m more water in oceans!
o CO2 conc are cyclic and predictable – naturally fluctuating over
history. But now the CO2 is increasing in an unnatural way
different from previous variation.
Unlock document

Already have an account? Log in
Environmental Change – Global Indicators/Datasets
- Distribution of animals;
o bigger, stronger red fox moving into territory of artic fox. Mosquitoes in the artic now
when they’re weren’t any 20 yrs ago
- Artic Sea Ice Extent – New Minimums
o Min and max extents change, but multi-year ice is changing and diminishing
o As ice cover decreases, northwest passage will become travel route. A lot of economists
are in denial bc loss of sea ice will open artic for more travel
- Glacier Mass Balance
o In 40 yrs, Grinnell Glacier lost approx.. 40% of its area
o Worst case scenario: all glaciers in the glacier national part will disappear by 2030
o 80% total glacier coverage (an important water resource) could disappear in the next few
decades
- Ocean Temp & Sea Level
o James Hansen on Ice Sheets - 2016
▪ The disintegration of ice sheets is likely to be very non-linear. We know that in
the history of earth, when ice sheets have collapsed and sea lvl has gone up to
several meters in a century. Now humans are changing the composition of the
atmp much faster than ever before, this could happen again. Especially around
Antarctica we see that the ice shelves are melting and as they melt it allows the
ice sheets to be discharged into the oceans more rapidly. In their model they
found that freshwater on the surface (bc it's less dense and doesn’t sink as easily)
causes the heat in the ocean to further melt the ice shelves instead of coming out
into the atmp (positive feedback loop).
▪ Rising sea lvls have huge implications; more than half of the largest cities in the
world are located on coastlines. loosing functionalities of these cities would have
huge economic and social consequences. We can't let the ice sheet disappear and
sea lvl rise.
▪ A more immediate threat: shutting down the ocean’s overturning circulation
(deep water formation) in North Atlantic and Southern oceans. IPCC doesn’t
report this.
o Sea lvl rise is caused by
▪ 1) melting of land ice
▪ 2) increased heating of upper ocean causing it to expand
o Sea lvl has risen ~1.7 mm yr-1 over the last 100 yrs.
- Vegetation
o Measurable increase in certain vegetation types
o Watershed productivity has also changed (increased -sequester more carbon, increases
respiration)
Unlock document 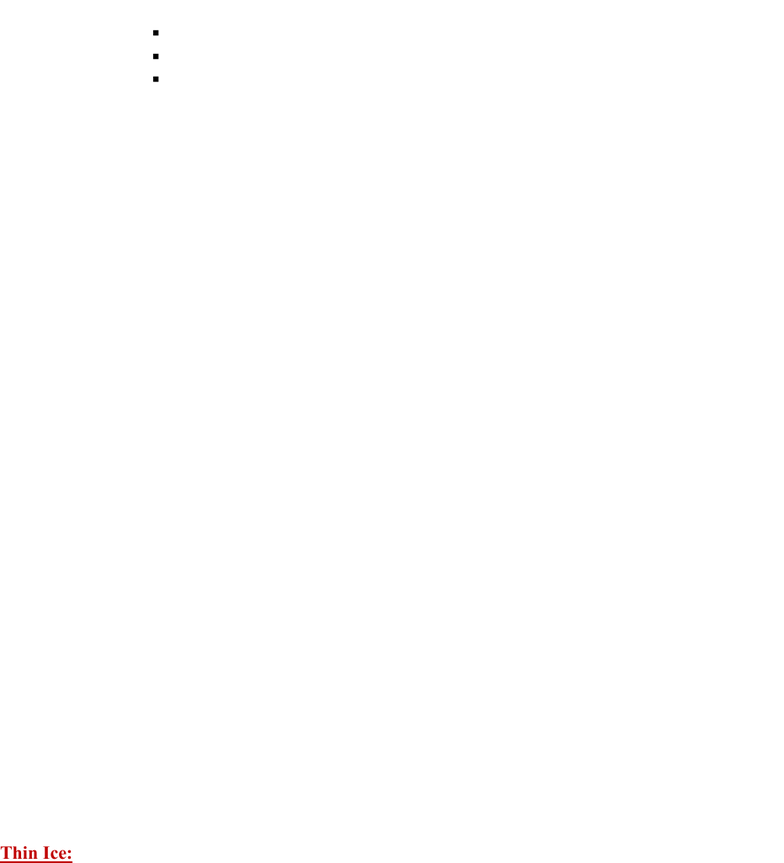 Climate Change
- How does the climate system work?
o Time scales of CC, why look back in time?
o Components of Earth’s Climate System (5): hydrosphere, lithosphere, biosphere,
cryosphere and atmosphere. → they all interaction, interconnected, C is moved
throughout all of the spheres and systems.
- Difference between climate and weather:
o Climate is the weather of a place averaged over a period of time, often 30 years.
▪ Ex. You can expect snow in the northeast in Jan
▪ Includes extreme valyes such as record high temp or record amount rainfall
▪ Climate = longer time scales!
o Weather: can change from minute-to-minute, hour-to-hour, day- to-day, and season-to-
season. Weather varies daily! These daily anomalies don’t tell you anything about trends.
- Time: in a climate change context
o Earth is 4.5 byrs, we look at CC in the context of the past 500 Mya
o ???: (time scales)
▪ Tectonics (300 mya), Orbital variations (3 mya), Glacial (50 Kyrs), Historical
(2kyrs), Instrumental (AD 1825)
▪ Cyclic variations in climate in each time frame, which depend on all these diff
time frames (change in tectonic plates, orbit…)
▪ What makes this CC different than previous ones is the RATE it’s occurring
- Why look so far back in time?
o Earth is constantly changing on long and short timescales. Natural processes have
controlled those changes, and many of them have been enormous (e.g., the collision of
continents driven by plate tectonics; the increasing diversity of living forms; the massive
extinctions that characterize the fossil record). The natural processes that cause global
climate change include plate tectonics, volcanic eruptions, extraterrestrial impacts, and
variations in Earth's orbit
▪ Earth’s cc were governed by natural variability, now humans are driving CC
▪ We’ve never seem rates like this (ex. CO2 change…), don’t know what to expect
▪ We use the past history to project future changes, baseline for quantitative
assessment for human influence
- 3 Types of Natural Climate Forcing (w/ different time-scale processes):
o 1. Tectonic Process
▪ Internal heat alters the surface’s basic gphy-plate tectonics.
▪ V.slow process (Mya)
o 2. Earth-orbital changes
▪ Variations in the path around the sun change the amount of solar radiation
received on the ground
▪ Slow process (10-100 kys)
o 3. Changes in the Sun’s Radiation
▪ The strength/amount of solar radiation
▪ Ranges from decades – millennia
Thin Ice:
Unlock document