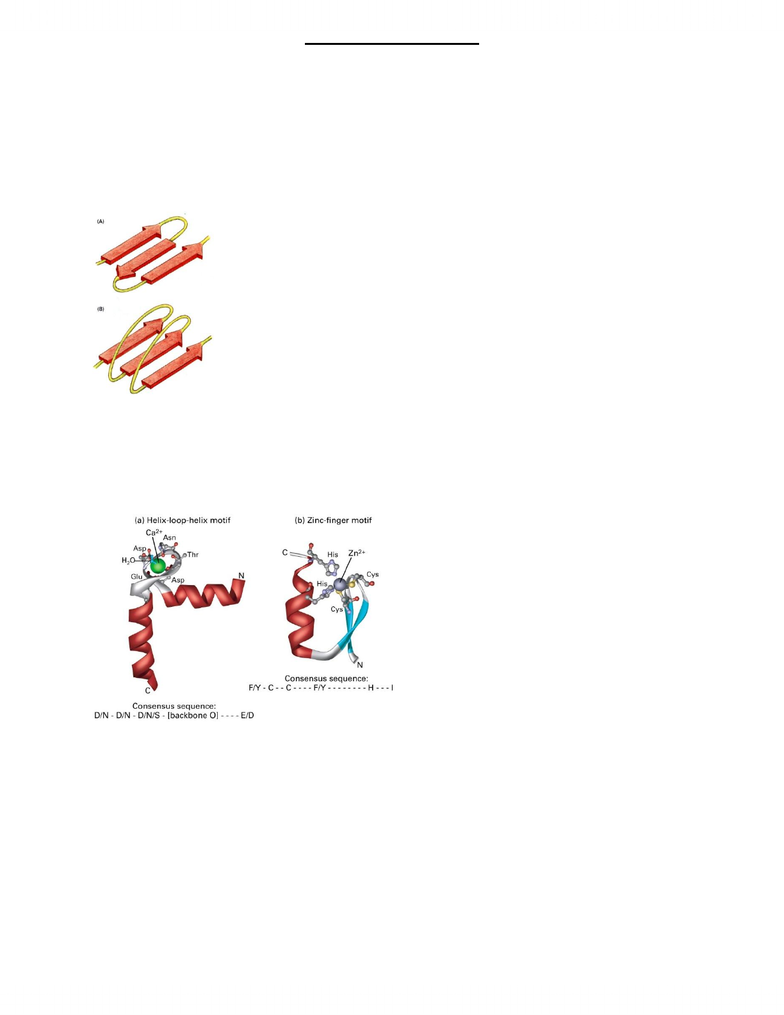 Notes for Second Midterm
 Folding is important since it reduces the loss of function, prevents diseases which are
associated with miss-folded proteins.
-helix – it is right handed helix stabilized by H bonds between C=O of peptide group n and N-
H of peptide group n+4.
 3.6 AA are required for one complete turn. The R group points outwards.
 Ala, Leu, Met, Glu (Normally found in  helix).
 Pro, Gly, Ser, Thr (Normally not found in  helix and are referred to as helix breaker)
 Hydrogen bond is between the O at carbonyl group to the H atom on the amid group on
the n+4 amino acid.
-sheet – adjacent chains held together by hydrogen bonds between
backbone. Stability depends on the number of hydrogen bonds. Can be
divided into three classes:
 Parallel – chains run in the same direction (One
side will have either all N or C terminus, R group all point in same
directions)  Bottom
 Antiparallel – chains that run in opposite
direction (one side will have alternating patter of C and N and R
groups will either be facing up or down)  Top
 Mixed – will contain combination of parallel and
antiparallel.
 5-10 AA per strand, and can have 2-15 strands. Results in formation of
either cylinder or barrel shape or flat planar sheets.
 Note that the arrow head points towards the C-terminus
 Motifs and domain are part of tertiary of structure.
Motif: recurring combination of secondary
structure in different region of the protein, ex
(helix-turn-helix). It is described in secondary
structural terms.
 The helix – loop – helix is a Calcium ion
binding motif. It is able to hold calcium ion
because it has negatively charged Asp, Asn,
Thr.
 Zinc-finger motif is designed to hold Zn
ion. It holds the Zn with help of 2 His pointing
towards the Cys which holds the Zn atom.
Domain: subunit of 3D structure which
describes how a protein will fold into an
independent shape. One polypeptide can have
more than one domains, it just depends on how many 3D structure it forms. Domains
contain secondary structure, thus it could also have motifs as part of it.
 Genotype: the genetic information that is encoded into the linear system of the nucleotides
within the DNA.
 The primary structure of the DNA codes for the primary structure of the protein.
 In Eukaryotes genetic info is segregated into different locations like the nucleus,
mitochondria and chloroplast. While in prokaryotes it’s present in nucleoid and plasmids
which are integrated with cytoplasm.
 Gene is a region of DNA which controls a discrete hereditary trait of characteristic (genesis).
It is physical and functional unit of hereditary which carries information from one generation
to next. It is an entire DNA sequence necessary for the production of a functional protein or
RNA Molecule (Molecular view)
 DNA codes for a message which is translated into an amino acid sequence of protein.
Unlock document 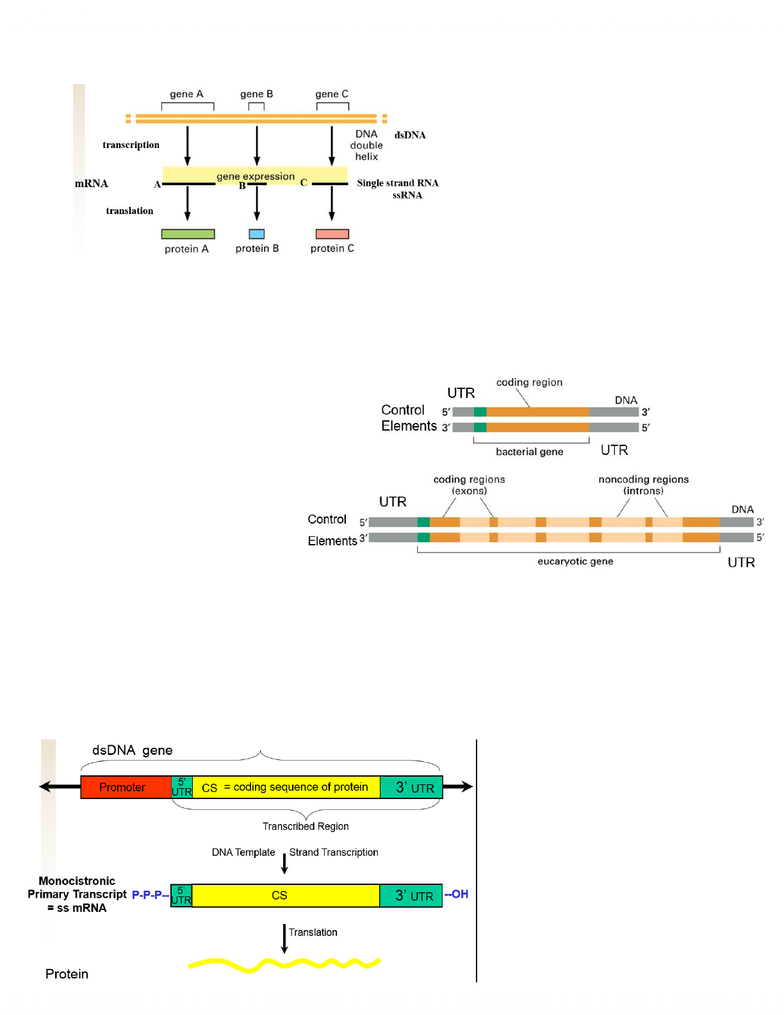  There is a switch which determines when and when not to transcribe the DNA.
 Gene sintony is the order of which genes occur on chromosomes and they are used to control
cluster of genes along with individual genes.
 Genes are discrete unit, one gene
will not overlap with the other gene.
The exception to this is the viruses
because they have small genome.
 The first amino acid in most of the
protein was methionine.
 Gene NEEDS a start (promoter),
stop (terminator) and open reading
frame (the part which contains the
information for creation of the gene).
 Not all the DNA in the organism codes for a gene. There are many other DNA sequences
between genes which doesn’t contain information for synthesis of proteins and RNA.
 As the species get complicated the gene density decreases. Ex. Humans have gene density of
10% and 90% of the genes is non-coding gene, it was junk.
 Aprox 500 gene is the bare minimum for any living organism.
Prokaryotic Gene:
 It has a promoter – a region
to which RNA Pol binds.
(non-coding region)
 Exon – the region between
the start and stop which is
transcribed into the RNA
and encodes most or all part
of the protein. UTRs: 5’ and
3’ UnTranslated Regions,
which are transcribed into
RNA however, they aren’t
translated into the protein.
Eukaryotic Gene:
 It has exon, promoter, and UTRs. However, it contains Introns which are region of
eukaryotic gene that doesn’t code for proteins but is transcribed to RNA and later removed.
 Gene expression is the process which involves transcription and translation of a discrete
DNA sequence.
 There are two types of mRNA formed:
 Monocistornic – contains single gene.
 Polycistornic – contains more than one gene. (generally in bacteria)
 DNA-dependent RNA
synthesis is the process by which
the RNA is coded from the
DNA.
 RNA is synthesized from
DNA template is complementary
to the DNA template
 The nucleotides are added
from 5’  3’.
 RNA synthesis is catalyzed
by RNA polymerase. It creates
single stranded DNA template
and doesn’t require primer.
Unlock document 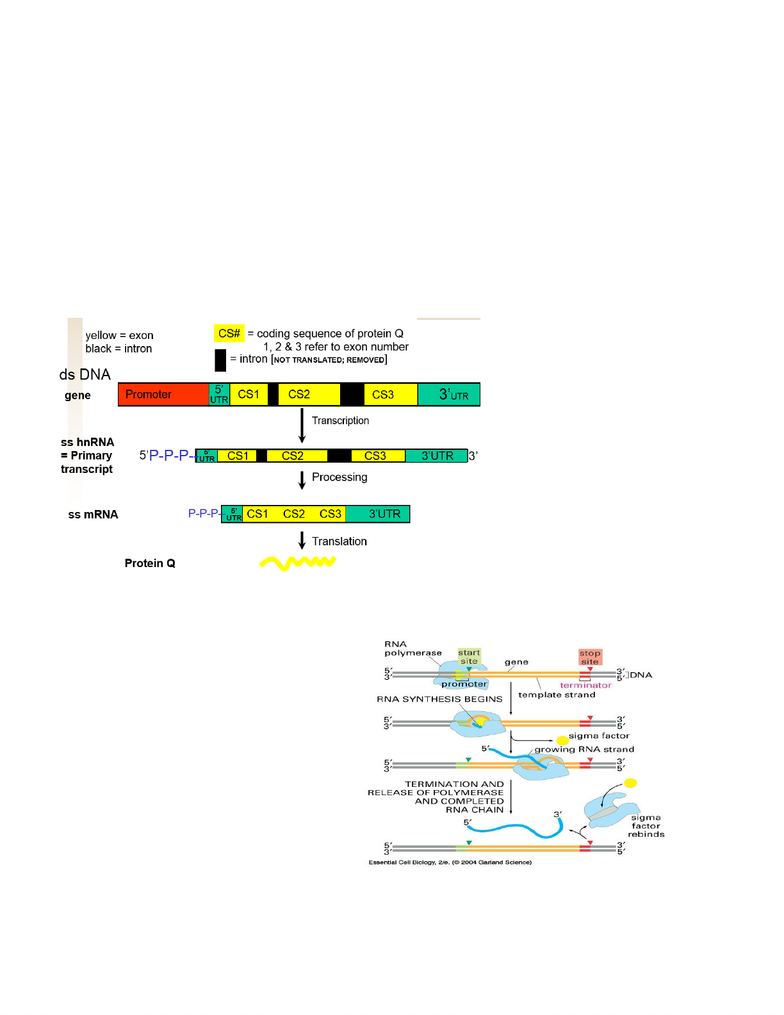  The products are called primary transcript.
 Prokaryotic cells = mRNA (can be translated immediately)
 Eukaryotic cells = heterogeneous nuclear RNA (hnRNA) or pre-mRNA. The hnRNA
undergoes post-transcriptional process to become mRNA and then it translated into
protein.
 In transcription the (-) strand (non-coding = template) is used by the RNA Pol to synthesise
sense mRNA. However, the (+) strand (coding = non-template) isn’t transcribed since its
carries information which the mRNA contains (same polarity, similar base pairs). If (+)
strand is transcribed, it results in antisense RNA.
 Transcription start site is always labeled +1, and upstream (away from gene) from start site is
labeled -1, -2 and so on. While downstream (towards the gene) is +2, +3 and so on.
 A DNA-RNA hybrid happens during transcription, however it is short lived. In this the RNA
forms complementary base pairs with DNA.
 The process of RNA synthesis is self-energizing reaction since the energy required for this
process is provided by hydrolysis of the phosphate groups on each nucleotide base.
Eukaryotic hnRNA:
 In the processing step, the
introns are removed through the
process of splicing. In this the
sugar phosphate backbone is
broken into sections where the
introns are removed and the
exons are ligated together to
form ssRNA molecule, which
contains the full gene. The
processing is done in the
nucleus of the cell.
 Polycistronic message
contains a promoter which
controls the transcription of
more than one gene. In this
ssRNA, there are more than on gene present. The space between each gene is called the
ribosome binding site. This site is used to regulate one or all of the protein regulation present
on the ss mRNA.
The General Transcription in
Prokaryotes:
 The RNA Pol has the sigma factor
attached to it which allows the RNA
Pol to attach to the start sequence.
Once the RNA Pol has been attached
and the transcription has been started,
the sigma factor releases itself (after
10-15 nucleotide have been copied)
and binds to another RNA Pol. *Note
that there are multiple types of sigma
factors, each associated with specific
promoter region.
 In prokaryotes the RNA Pol is a globular protein which consist of 5 subunits with a catalytic
site.
 Variable regulatory factor: sigma
 RNA Pol holoenzyme = core + sigma factor.
 The core enzyme consist of:
 α-subunit x2 (36,000 Da x 2) – recognize the upstream element (-40 to -70) in DNA.
Unlock document