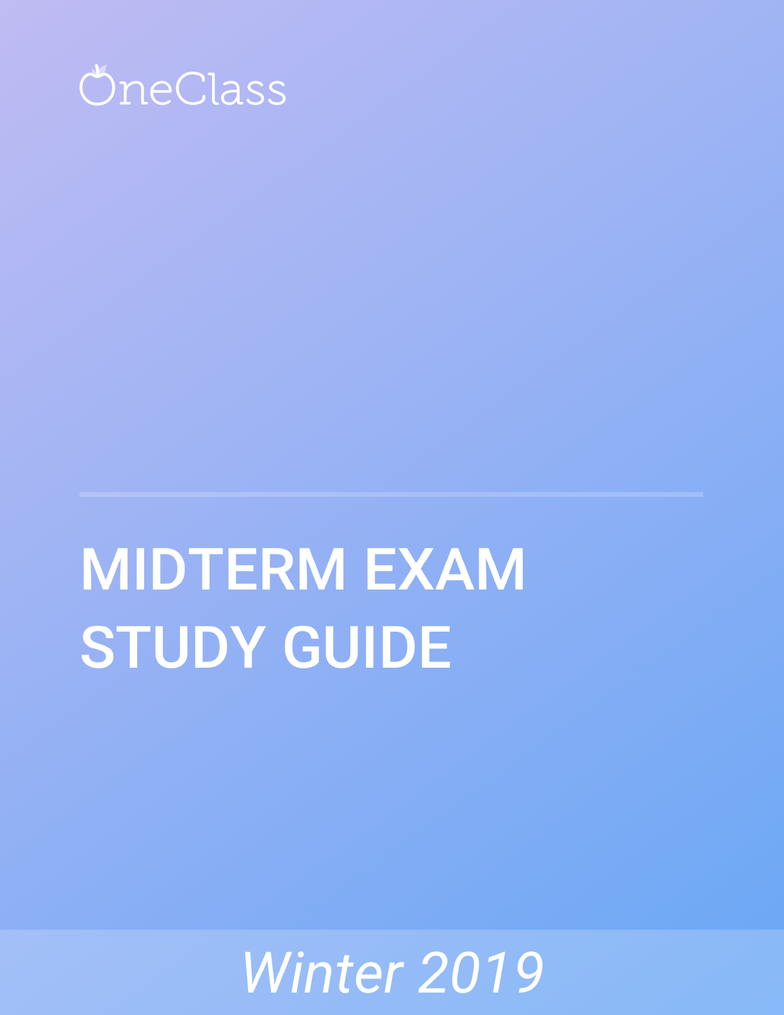 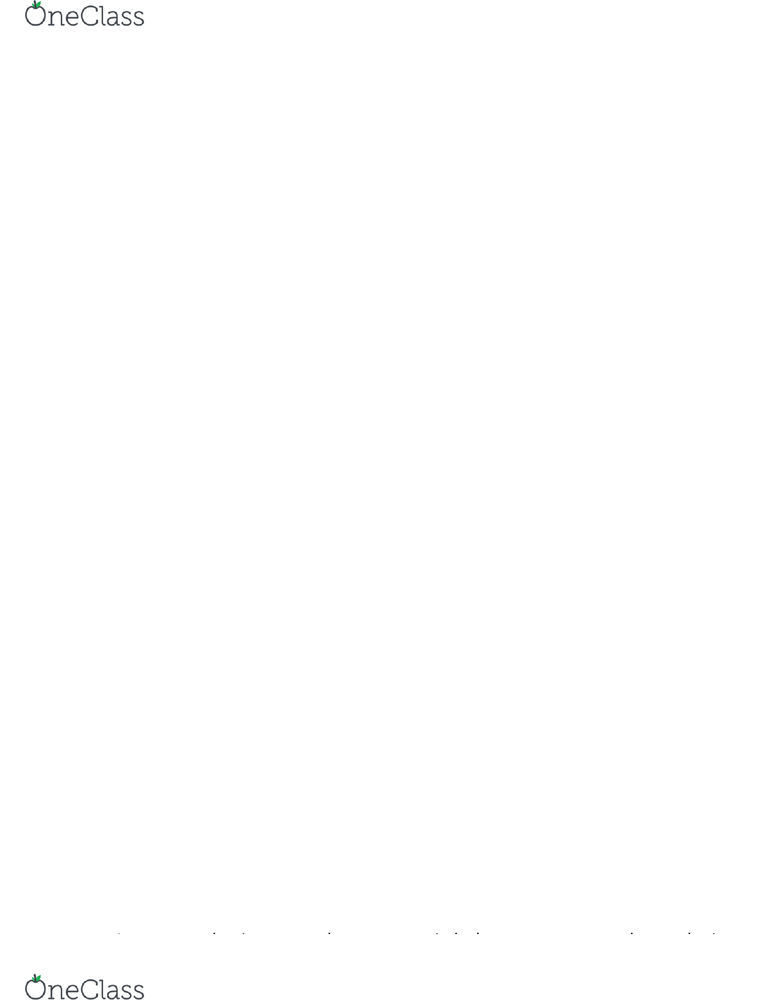 •
How interaction with the legal system has long lasting affects/consequences
What is prisoner re-entry?
•
The process of leaving prison and returning to society
•
Petersilia - All activities and programming conducted to prepare ex convicts to
return safely to the community
•
Turner - 3 phase process. Begins when someone is admitted to prison,
continues as they prepare for release, and includes the actual release
•
Gottschalk - the term suggests that ex-offenders are being returned to a level of
habilitation, integration, and participation that they formerly enjoyed, yet many
former offenders were never involved in the integration of society to begin with
•
Acknowledge that it is a process
Why study prisoner re-entry
•
93% of all prisoners are eventually released, it is something that is happening all
of the time
•
Approx. 68% of those released recidivate within 3 years
•
US stats: 600,000 individuals re-entering society, more than 8 million under
state control/government supervision
•
Canadian stats: 85,170 released from jail/prison, 137,471 released from remand
custody, 20,506 other releases
•
A lot of people getting out of jail, but we don’t do a good job of making sure
that they don’t go back
•
Much more cost effective to make sure they stay out and develop good
programming
Terminology and the importance of language: Inmate, prisoner, other
•
Nomenclatures are important and exist to clarify the world around us
•
The marshall project - how to refer to people behind bars
○
200 responses
○
38% preferred incarcerated person, 23% preferred prisoner, 10%
preferred inmate
○
30% selected other (people in prison, man or women, persons name)
•
Inmate: used to just mean that you occupied a house, now means that you're in
Intro -January 10 -Week 1
Tuesday, January 8, 2019
11:09 AM
find more resources at oneclass.com
find more resources at oneclass.com
Unlock document 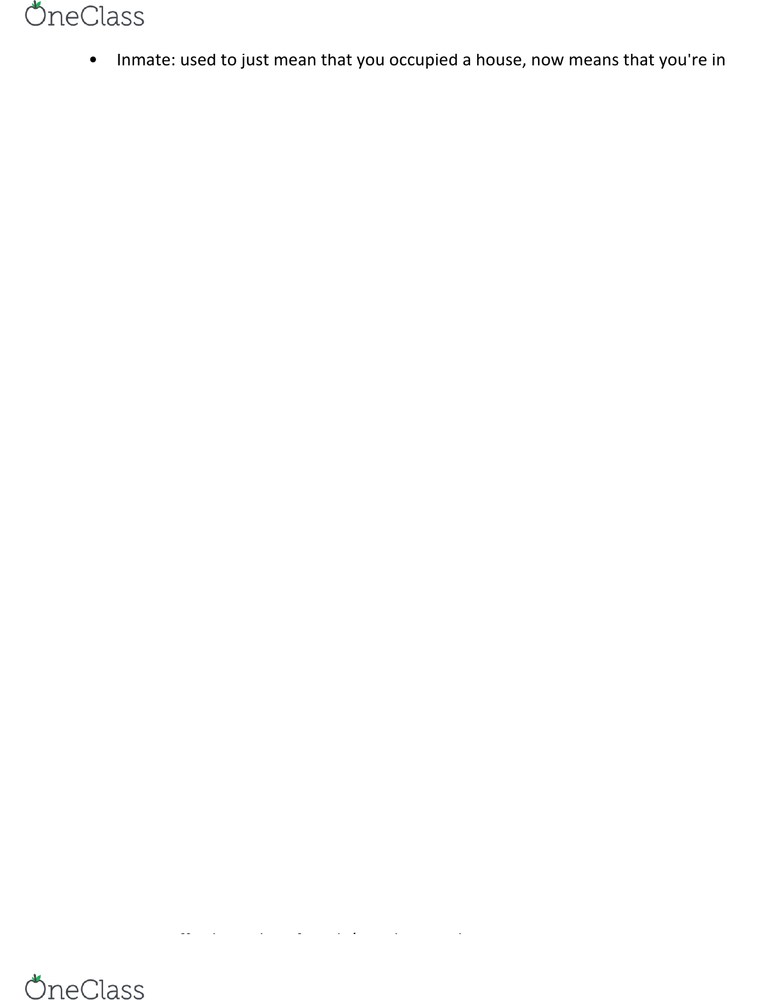 •
Inmate: used to just mean that you occupied a house, now means that you're in
prison or mental institution.
•
Incarcerated person: doesn't attack someone's character as much as others.
•
Prisoner: accurate and acknowledges that they are victims
•
Other: referring to them as their name, man or women, people. Allows them to
defines themselves as who they are outside of prison. Just because you did
something in the past, doesn’t mean that should always be your label
Why do labels matter?
•
Why might labels be significant for those exiting the prison system?
○
Begin to believe you are that label
○
Self-fulfilling prophecy
○
Stigmatization
○
Dehumanizing
○
Obscures other parts of an individuals identity
○
Frames certain groups as invisible or dispensable
○
Conceals broader issues like racism and classism
○
Reinforces division between law abiding and law breaking
○
Disguises the reality of imprisonment
○
Language as a tool of oppression
○
*****use formerly incarcerated people or ex prisoner for
assignments****
Dinner with bruce - reading
•
Thing-pair-share
•
Story about formerly incarcerated person named Bruce returning to society
•
General thoughts?
•
What are some of the barriers to re-entry that were identified
○
Hard to find social networks
○
Hard to make connections with people without mentioning he was in
prison
○
Had a hard time finding a job, but eventually found a difficult job
○
Lack of public social skills example: restaurant
○
Lacking transportation
○
Substance abuse issues
○
Health, mental health needs
•
What were some of the signs of the institutionalization that Bruce exhibited
○
Hard to do things in normal environments example: cooking
○
Difficulty making friends/social networks
find more resources at oneclass.com
find more resources at oneclass.com
Unlock document 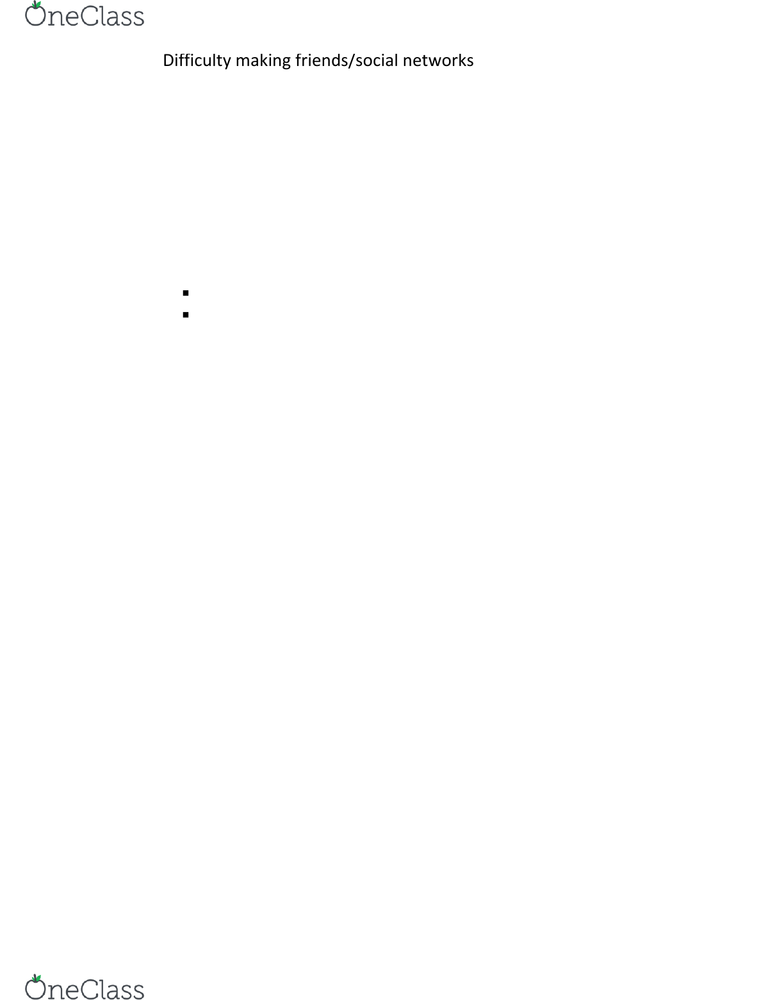 ○
Difficulty making friends/social networks
•
How did the article demonstrate the impact of being labelled a murderer/felon
○
Committed to changing his behaviour but still has a lot of concerns about
himself
○
Obscured the context of his actual crime
•
Main take away?
○
Attend to contextual piece that is often missing
○
Highlights the way we can see these experiences differently when we can
read these individuals stories
○
Starts to do a good job of showing how individuals are set up to fail
§
Jobs
§
Social networks
Next week
•
Governance of former prisoners
•
Guiding questions
○
What are the various forms of control exercised over criminalized
individuals
○
How does the governance of former prisoners impact their life on the
outside
○
What does the governance of former prisoners suggest about their
character
find more resources at oneclass.com
find more resources at oneclass.com
Unlock document