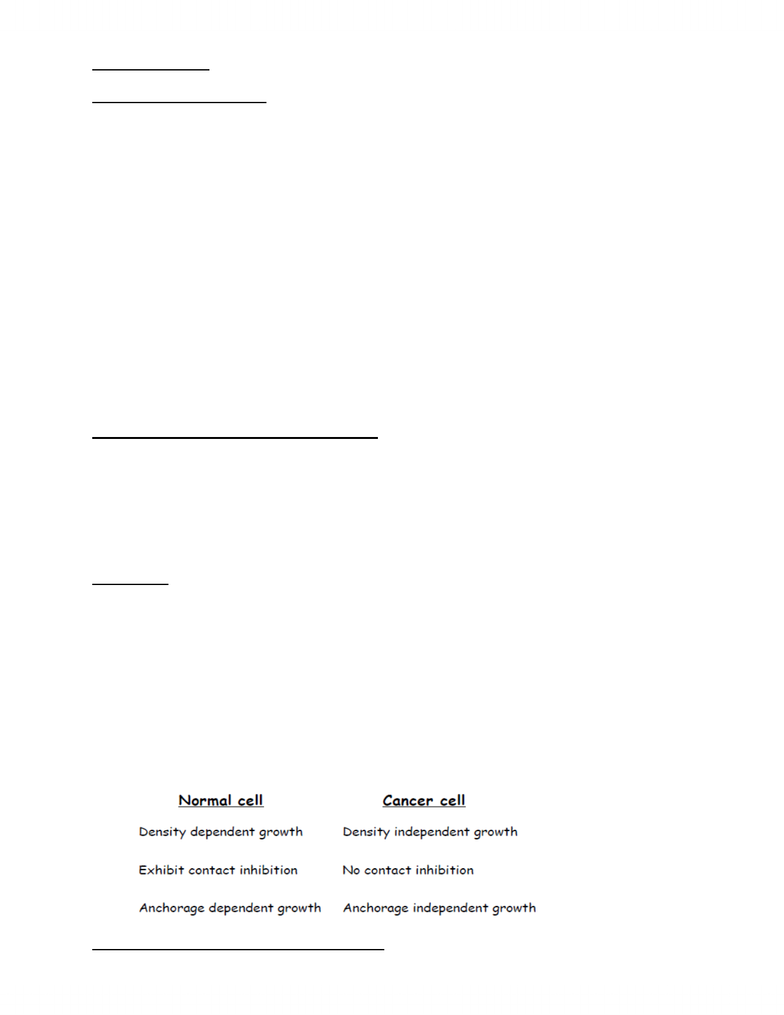 Chapter 16 – Cancer
Lecture 19 - Biology of Cancer
→cancer is not a genetic disease – it is not transmitted to the zygote. Instead it is from DNA in
somatic cellb during lifetime of affected individual
→it is a genetic disease because it can be traced to alterations within specific genes
→cencer cells, because of changes can proliferate uncontrollably, producing malignant
tumors→ invade surrounding tissue
→if they stay in one area then they can be treated, but malignant tumors→ tend to
metastasize: spawn cells that break aaway from the parent mass and enter lyphatic or vascular
circulation, and spread to other parts of body making secondary tumors called metastases
→Lung and colon cancer are the real killers, even though Prostate and Breast cancer have the
highest cases per 100,000 people, lung and colon cancer have the highest deaths /100,000
people
Characteristics of Normal Vs. Cancerous cells
→cancer cells can be studied by rremoving a tumor, separating it into its cells, and culturing the
cells in vitro
→normal cells can also be made cancerous by treatment with carcinogenic chemicals,
radiation, or tumor viruses
Cancer Cells
→denisty independent growth. They grow regardless of is they covered the bottom of a
culture dish or not
→no contact inhibition: growth inhibition arises from contact with surrounding cells in culture
for normal cells, but for malignant cells, they grow in another layer on top forming a clump.
They also tend to keep growing in the absence of growth medium.
→anchorage independent growth: they do not need to be anchored to the bottom layer of the
culture dish.
Characteristics of Normal and Cancerous Cells
→normal cells: require growth factor
Unlock document 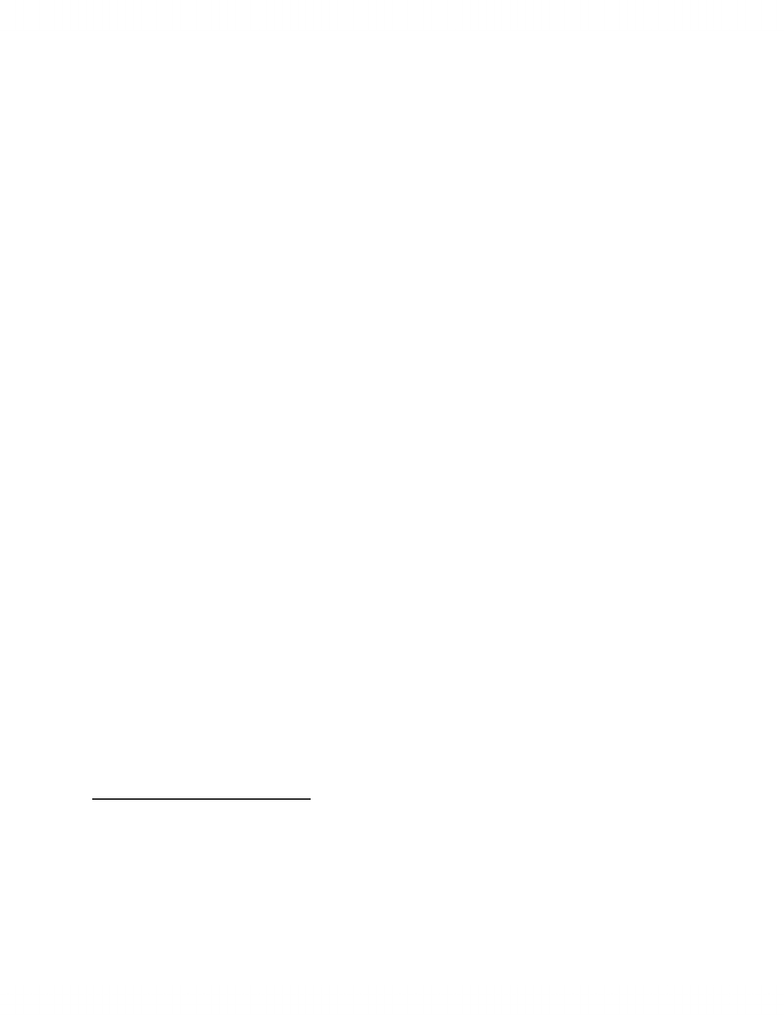 →cancer cells: can continue to grow without growth factor in the medium because they
produce their own
→normal cells: normal ploidy levels: maintain diploid chromosomal complement as they grow
and divide. They also have a lower level of telomerase→ which keeps telomeres at the ends of
chromosomes allowing continued division
→cancer cells: aneuploidy: genetically unstable and often have highly aberrant chromosome
complements → occurs due to defects in mititotic checkpoints. They also have higher levels of
telomerase→ which keeps telomeres at the ends of chromosomes allowing continued division
→normal cells: → apoptosis induced in aneupolids: when chromosomes content
becomes deranged they undergo cell death.
→cancer cells: apoptotic failure: can’t initiate apoptosis even when chromosome count
is deranged.
→normal cells: form gap junctions for intercellular communication
→cancer cells: few gap junctions: don’t need to communicate with adjacent cells.
→normal cells: normal proteinase secretion: proteinase breaks down extracellular
matrix
→cancer cells: elevated levels of proteinase secretion: the excess proteinases allows
loosening of tissue so cancer cells can detach and invade adjacent tissue (matastasize)
→after a finite number of mitotic disiviosn, they undergo aging and render them unfit leading
to their apoptosis. Also undergo apoptosis if they are aneuploidy
→when cancer cells are mutated and they are immortal and continue to divide and grow
indefinitely. This can be attributed to inc telomerase which allows the telomerease to remain at
the ends.
Benign tumor: unresponsive to growth control but lack ability to invade other tissue
Malignant tumor: unresponsive to growth control and capable of invading other tissues and
form secondary tumors
12.2 Three major causes of Cancer
→all of these agents must be able to alter the genome in order to cause cancer
1. Chemicals: caarcingogenic chemicals and other compounds shown to cause cancer.
Found in soot, cigarette smoke, can be mutagenic or are converted to mutagenic
compounds by cellular enzymes
2. Radiation: ionizing radiation, ultraviolet radiation, leading cause of skin cancer,
strongly mutogenic.
3. Viruses: many viruses can infect mammalian cells and make them cancer cells.
Unlock document 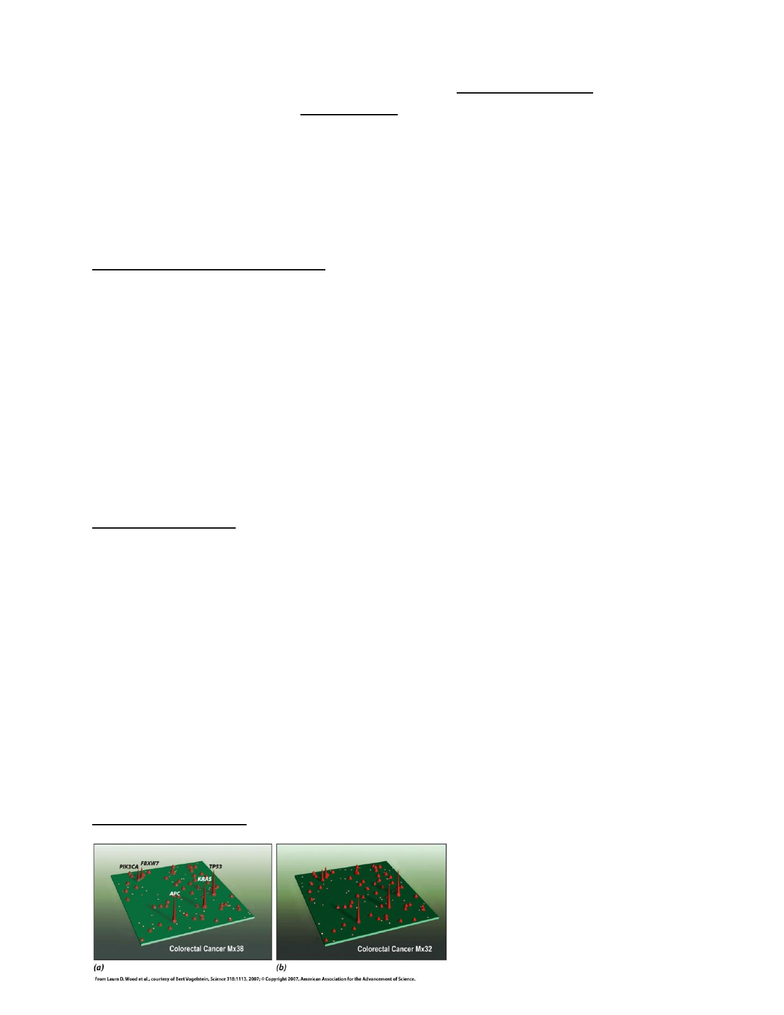 Oncogenes: encode proteins that promote the loss of growth control and
conversion of tell to a malignant state. Act as accelerators of cell proliferation, may
lead to genetic instability, prevent a cell from going through apoptosis, or promote
metastasis. it was part of the genome.
→now we know cells have a variety of genes called proto-oncogenes: that have
potential to subvert the cell’s own activities and push cell toward malignant state
Importance of environmental Factors
→in Japanese immigrant coming to Hawaii
→the incidence of stomach cancer declines, whereas that of breast and colon cancer rises.
Howeber, of the three types of cancer, only colon has reached rates equivalent to caucaisian
Hawaiians by second generation
→people who move from Asia to US or Europe show the importance of environmental factos
such as diet
→Asia usually has high level of gastric cancer, but once moving to these counties they are
subject ot an elevated risk of colon and breast cancer, characteristic of Western countries
Mutations accumulate
→10,000 DNA bases are damaged or lost per cell per day
→there are many chemical reactions that occur, which can alter the DNA which are often
corrected, but the few can accumulate, and indicden of cancer increases with age due to this
The Genomic Landscape
Unlock document