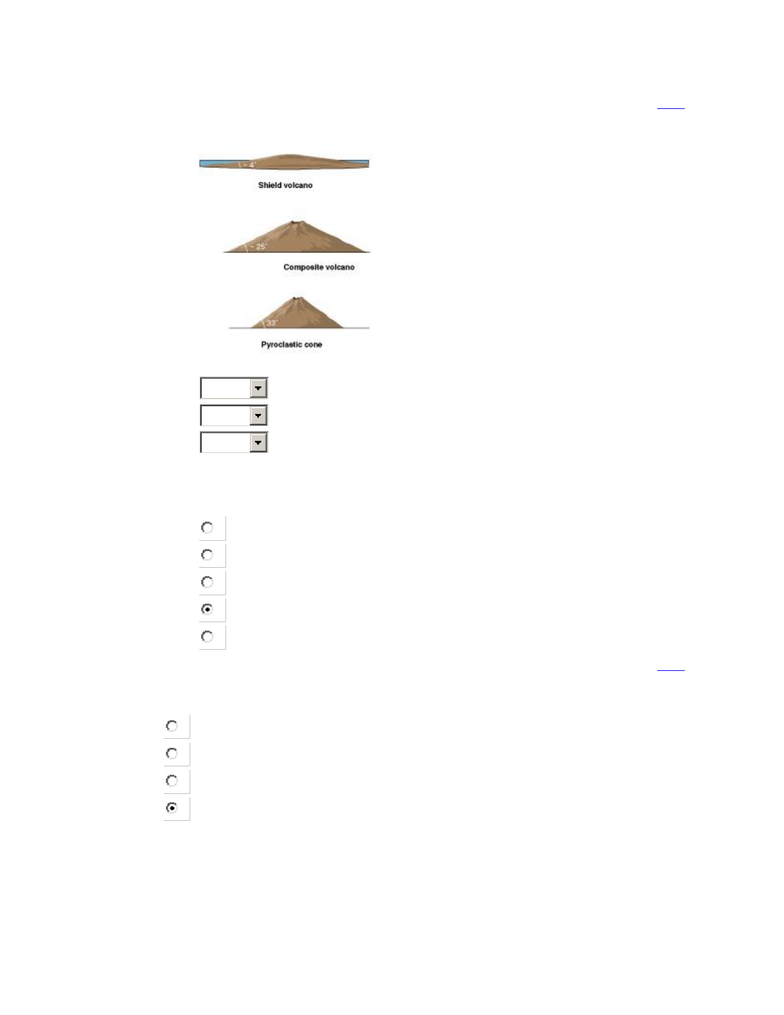 Question 1
1 points
Save
Arrange these types of volcanoes from smallest to largest.
b.
composite volcano
a.
pyroclastic cone
c.
shield volcano
Whether volcanic eruptions are very explosive or relatively quiet is largely determined
by
a.
the amount of gas in the lava or magma
b.
the ease or difficulty with which the gas escapes to the atmosphere
c.
the viscosity of the lava
d.
all of the preceding are true
e.
none of the preceding are true
0.5 points
Save
The major difference between breccia and conglomerate is _____.
a.
all of the other answers are correct
b.
size of grains
c.
composition of grains
d.
rounding of the grains
Note: Jumbled sentence questions require you to use the drop down menu to answer, don't type in
your own response just use the drop down menu button for each blank please.
Unlock document 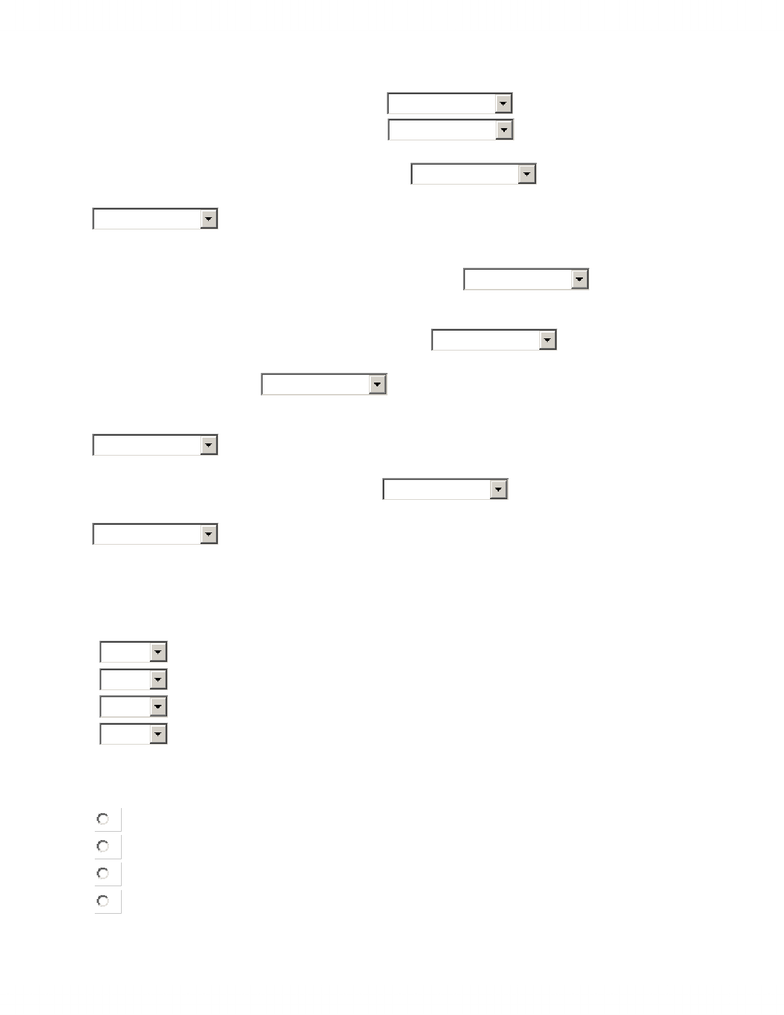 Limestone recrystallizes during metamorphism into
marble
. Metamorphism of limestone
may contribulte to global warming by the release of
carbon dioxide
.
Quartz sandstone is changed during metamorphism into
greenstone
.
phyllite
is a foliated metamorphic in which newly formed micas are larger than the platy
minerals in slate, but which still cannot be seen with the naked eye, giving the rock a satin sheen.
Because of the ease with which it can be split into thin flat sheets
slate
is used for
making chalkboard, pool tables, and roofs.
The two most common non-foliated metamorphic rocks are
marble
and quartzite.
Low-grade metamorphism of
basalt
forms Greenschist, with chlorite as the dominant
mineral.
basalt
could be the parent rock to an amphibolite.
A mixed metamorphic and igneous rock is called a
migmatite
.
gneiss
is a metamorphic rock with distinct light and dark layers that formed at high
temperatures and pressures
Please put the following rocks in the correct sequence for the pathway followed by shale as it undergoes
progressive metamorphism.
d.
gneiss
b.
phyllite
c.
schist
a.
slate
The huge volume of mafic magma that erupted to form the Columbia plateau basalts of Washington and
Oregon are attributed to ______.
a.
subduction
b.
meteorite impact
c.
seafloor spreading
d.
mantle mixing
Unlock document 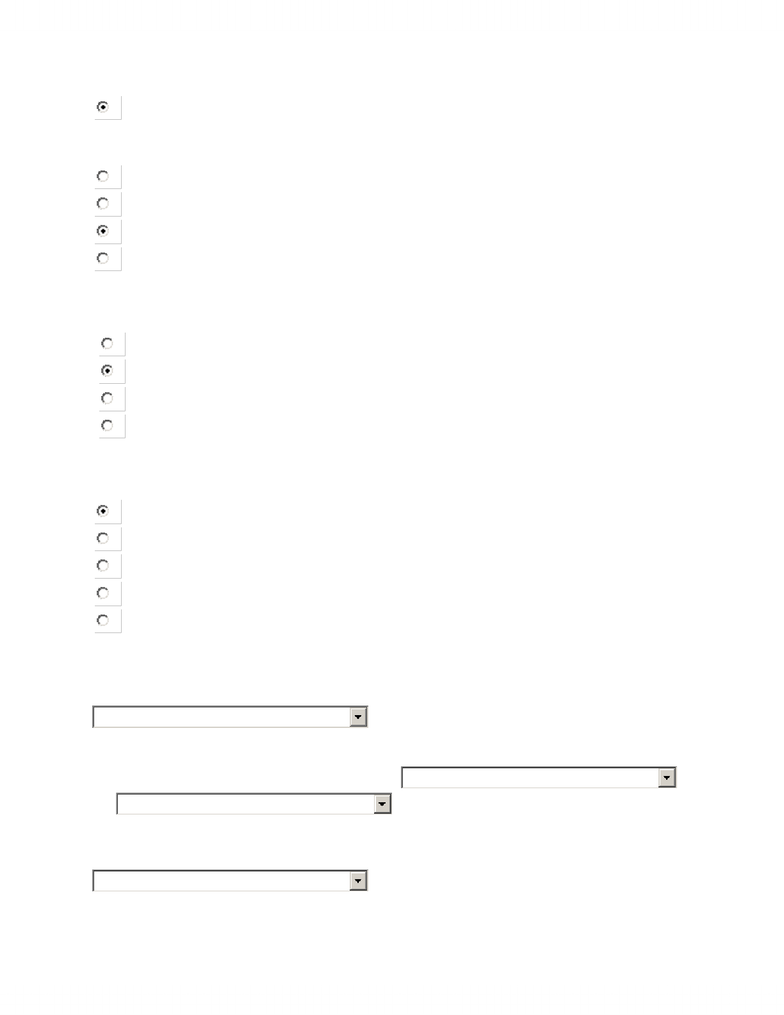 e.
a hot mantle plume
The major difference between metamorphism and metasomatism is
a.
the minerals involved
b.
the temperature at which each takes place
c.
metasomatism is metamorphism coupled with the introduction of ions from an external source
d.
the area or region involved
A typical example of a shield volcano is ________. A typical example of a composite volcano is
_______.
a.
Kilauea in Hawaii, Mount Edziza in B.C.
b.
Kilauea in Hawaii, Mount St. Helens
c.
Mount St. Helens, El Chichon
d.
None of the above combinations is correct.
Magma for most of the andesite in composite volcanoes observed along the west coast of the Americas is
due to _______.
a.
an oceanic plate subducted under the asthenosphere
b.
subduction along a divergent plate boundary
c.
rifting along a divergent plate boundary
d.
mantle plumes
e.
rifting along a convergent plate boundary
Jumbled sentence questions require you to use the drop down menu provided with each blank,
please do not type in your own response.
contact
metamorphism occurs adjacent to a pluton when a body
of magma intrudes relatively cool country rock.
Metamorphic rock forms from pre-existing rock when
heat
and
pressure
(alphabetical order please) cause solid-state
transformations.
Meteor craters show an unusual type of metamorphism called
shock
metamorphism.
Unlock document