Chapter 6
Punishment
Chapter Outline
Defining Punishment
A Common Misconception About Punishment
Positive and Negative Punishment
Unconditioned and Conditioned Punishers
Contrasting Reinforcement and Punishment
Factors Influencing the Effectiveness of Punishment
Immediacy
Contingency
Motivating Operations
Individual Differences and Magnitude of the Punisher
Problems with Punishment
Emotional Reactions to Punishment
Escape and Avoidance
Negative Reinforcement for the Use of Punishment
Punishment and Modeling
Ethical Issues
Chapter Summary
Key Terms
Practice Test
Appendix A
Chapter 6, Quiz 1
Chapter 6, Quiz 2
Chapter 6, Quiz 3
Ideas for Class Activities
1. Provide students with interesting, everyday examples of behavior and consequences. In the examples, vary
whether the consequence involves the addition or removal of a stimulus and vary whether the future outcome of the
behavior is a decrease of increase in the behavior. Ask students to identify each example as positive or negative
punishment or positive or negative reinforcement and explain why.
2. Discuss the distinction between punishment as a behavior modification principle and punishment as the word is
commonly used in society. Start by asking students to describe what the term punishment has always meant to
them. Discuss how punishment is viewed as “hurting” someone (as in a “punishing” tackle in a football game) or
as getting back at someone for a wrong. Discuss the notion that punishment in behavior modification does not have
to involve pain or retribution. Discuss how governments and other authorities often mistakenly think they are using
punishment, when in fact the consequences may not decrease the behavior of interest and thus may not function as
punishment at all, or only partially function as punishment (e.g., speeding tickets).
Answers to Practice Test Questions
1. Punishment is defined as follows: When a particular behavior occurs, a consequence immediately follows the
behavior, and as a result, the behavior is less likely to occur again in the future (the behavior is weakened).
2. Many people consider punishment to be quite negative, for example something you do to a person who has
committed a crime or other inappropriate behavior. It is thought to involve retribution or painful consequences
delivered to the person. In behavior modification, punishment is a technical term with a specific meaning. You
55
Unlock document 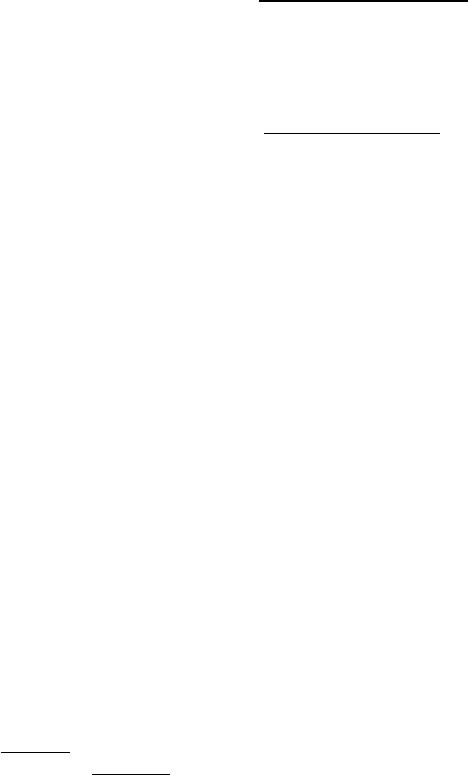 Already have an account? Log in
decreased.
12. Punishment will be maximally effective when it is applied consistently. If a schedule of reinforcement
continues to be in effect for a behavior and punishment is applied inconsistently, the behavior is being influenced
by an intermittent schedule of reinforcement at the same time it is resulting in an intermittent punishment
schedule. When a concurrent schedule of reinforcement is competing with punishment, the effects of punishment
are likely to be diminished.
13. An establishing operation is an event or a condition that will make a consequence more effective as a punisher
(or reinforcer). Missing lunch (food deprivation) is an establishing operation which makes being sent to bed
without dinner more punishing for a child. An abolishing operation is an event or condition that makes a
reinforcer less potent. Having eaten a large amount of food before supper, makes being sent to be without supper
less punishing for the child.
14. In general, a more intense aversive stimulus will be more likely to function as a punisher.
15. The following five problems may result from the use of punishment:
(1) Punishment may produce elicited aggression or other emotional side effects.
(2) The use of punishment may result in escape or avoidance behaviors by the individual whose behavior
is being punished.
(3) The use of punishment may be negatively reinforcing for the person using punishment and thus may
result in the misuse or overuse of punishment.
(4) When punishment is used, its use is modeled and observers or individuals whose behavior is punished
may be more likely to use punishment themselves in the future.
(5) Punishment is associated with a number of ethical issues and issues of acceptability.
16. a. extinction; b. positive punishment; c. negative punishment; d. positive punishment; e. extinction; f. negative
punishment; g. positive punishment.
Answers to Quizzes
Quiz 1
1. less 2. punisher or aversive stimulus 3. delivered or added 4. positive 5. removing, withholding 6. the
word “no” 7. establishing operation 8. the word “no,” a warning, a facial expression or statement of
disapproval 9. painful stimulation or an extreme level of stimulation 10. negative
Quiz 2
1. punishment 2. removed 3. negative punishment 4. extinction, negative punishment 5. conditioned 6.
unconditioned 7. more 8. less 9. negatively 10. emotional reactions to punishment, escape and avoidance,
negative reinforcement for the use of punishment, modeling the use of punishment, and ethical issues
57
Unlock document