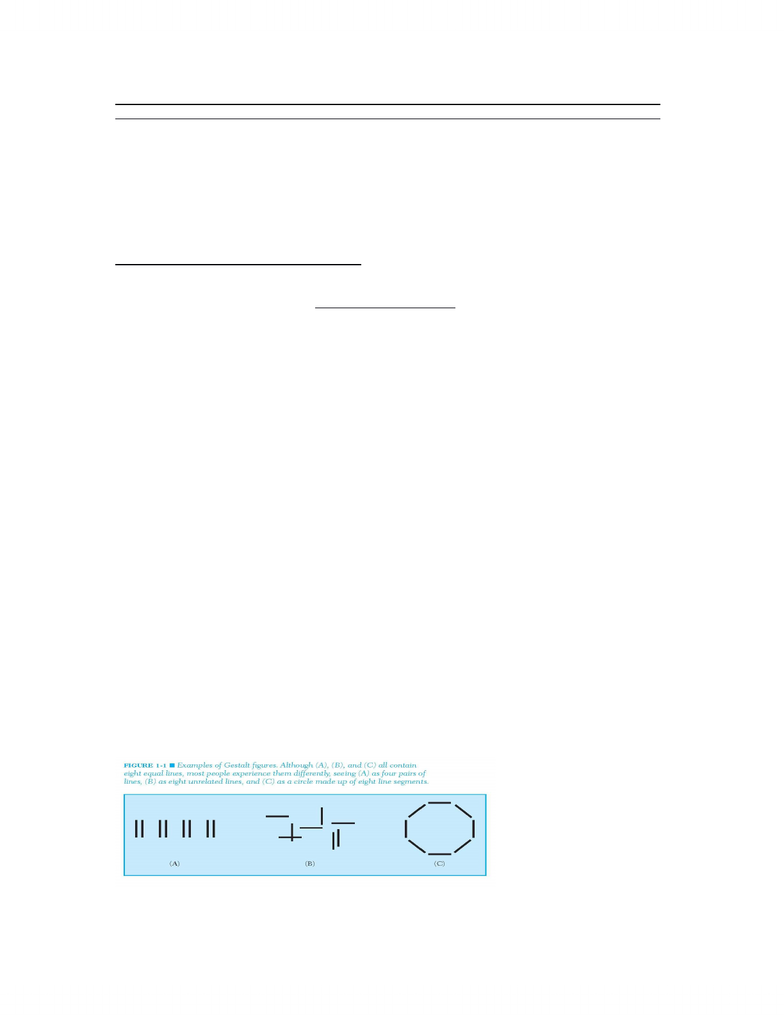 1
COGNITION REVIEW
LECTURE 1
History, Methods, and Paradigms
Antecedent Philosophies & Traditions
Empiricism:
- Locke, Hume, Stuart Mill
- Emphasis on experience / learning
- The key is the association between experiences
Nativism:
- Plato, Descartes, Kant
- Emphasis on that which is innate
Plato’s Cave Metaphor - The Matrix and the Cave
Structuralism:
- Wundt, Titchener, Baldwin
- Focus on elemental components of mind; describe conscious experience in terms of: mode, quality, intensity and
duration
Method: Introspection
- Report on the basic elements of consciousness
- Not Internal perception but experimental self observation
- Must be done in laboratory under controlled conditions
Functionalism:
- William James
- Regarded psychologies mission to be the explanation of our experience.
Why does the mind work as it does?
- Function more important than content
- Extended biological adaptations to mental phenomena
Method: Introspection in natural settings
- Must study the whole organism in real-life situations
- Must get out of the laboratory
Individual Differences (Sir Francis Galton)
•Intelligence, morals and personality were innate
•Studied mental imagery in both laboratory and naturalistic settings.
•Wanted individual differences in these cognitive faculties
•His invention of tests and questionnaires to assess mental abilities inspired later cognitive psychologists to
develop similar measures.
Gestalt Psychology:
- Wertheimer, Koffka, Kohler
- Focus on the holistic aspects of conscious experience (i.e. what order is imposed in perception)
- The key question is: what are the rules by which we parse the world into wholes?
- Rejected structuralism, functionalisms, and behaviourism as offering incomplete accounts of psychological and, in
particular, cognitive experiences.
Method: Introspection
-Experience simply described as given, never analyzed (e.g., I see a book)
Behaviourism:
- Watson, Skinner
- Took root in the 1930’s and dominated academic psychology until well into the 1960’s
- Can be thought of as a branch of functionalism
- Evolved as a reaction to the lack of progress using introspection; it rejected introspection
www.notesolution.com 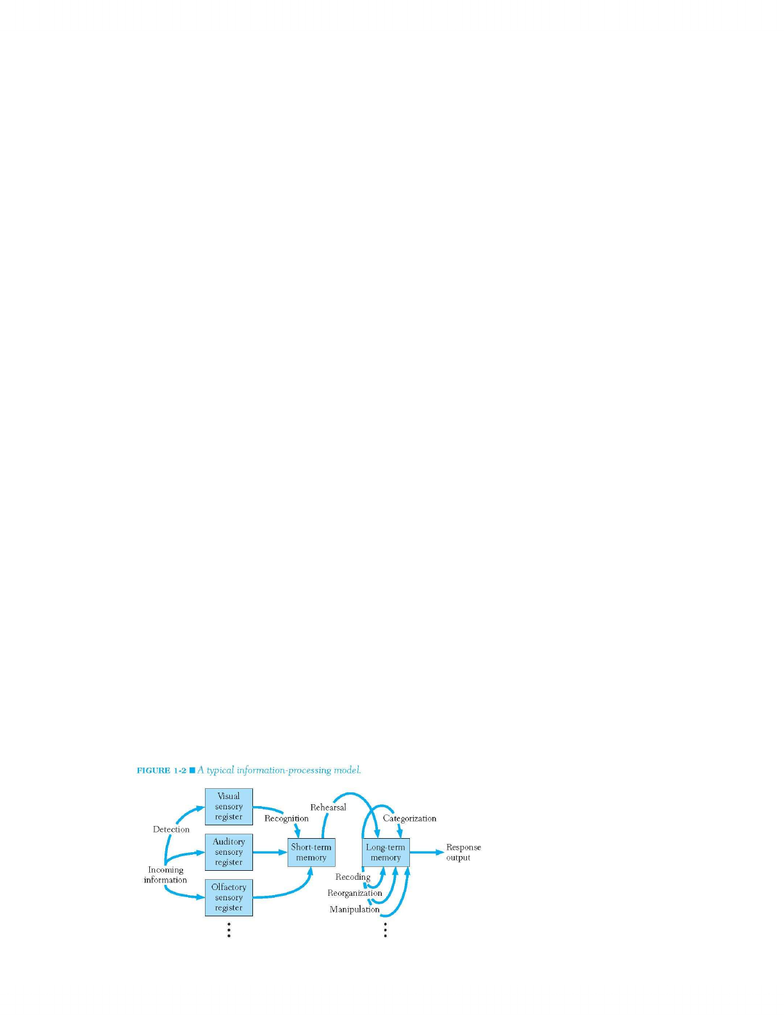 2
- Became unfashionable to talk about mental representations, consciousness, mental states
- Learning was emphasized, as was the relationship between inputs (stimuli) and outputs (responses)
Psychology as the Behaviorist sees it is a purely objective, experimental branch of natural science. Its theoretical
goal is the prediction and control of behavior. Introspection forms no essential part of its methods, nor is the
scientific value of its data dependent upon the readiness with which they lend themselves to interpretation in terms
of consciousness . . . What we need to do is start work upon psychology making behavior, not consciousness, the
objective point of our attack. (Watson, 1913, pp.158, 176)
The Cognitive Revolution -
(1) Human factors engineering presented new problems: During wartime: equipment design required knowledge of
human cognition Focus: what is the most optimal way to design a machine for human use. Psychologists and engineers
thus developed the concept of person-machine system
Humans seen as to share properties with better known, inanimate communications channels and came to be described
as limited-capacity processors of information.
(2) Behaviourism failed to adequately explain language.
- Skinner (1957): children learn language by imitation and reinforcement (behaviourism)
- Chomsky (1959): questioned operant conditioning explanation of language
(3) Localization of function in the brain forced discussion of mind.
- Donald Hebb: some functions (e.g., perception) are based on cell assemblies
- Hubel & Weisel: demonstrated importance of early experience on development of nervous system (e.g., cats with
early experience of horizontal lines failed to later perceive vertical lines)
Behaviourism as a METHODOLOGY survived and thrives today with its emphasis on rigorously controlled
experiments and sophisticated analysis, replication, etc.…
Information Processing – The emphasis is on:
-Information FLOWs through the organism.
-Draws an analogy between human cognition and computerized processing of information (i.e.
people are general purpose symbol manipulators)
-Information is stored Symbolically
-Assumes that information is processed (received, stored, recoded, transformed, retrieved, and
transmitted) in stages and that it is stored in specific places while being processed.
-Thought of it “systems” of interrelated capacities
-Nature of the representations
-Nature of the processes that operate on these representations (serial processing.)
www.notesolution.com 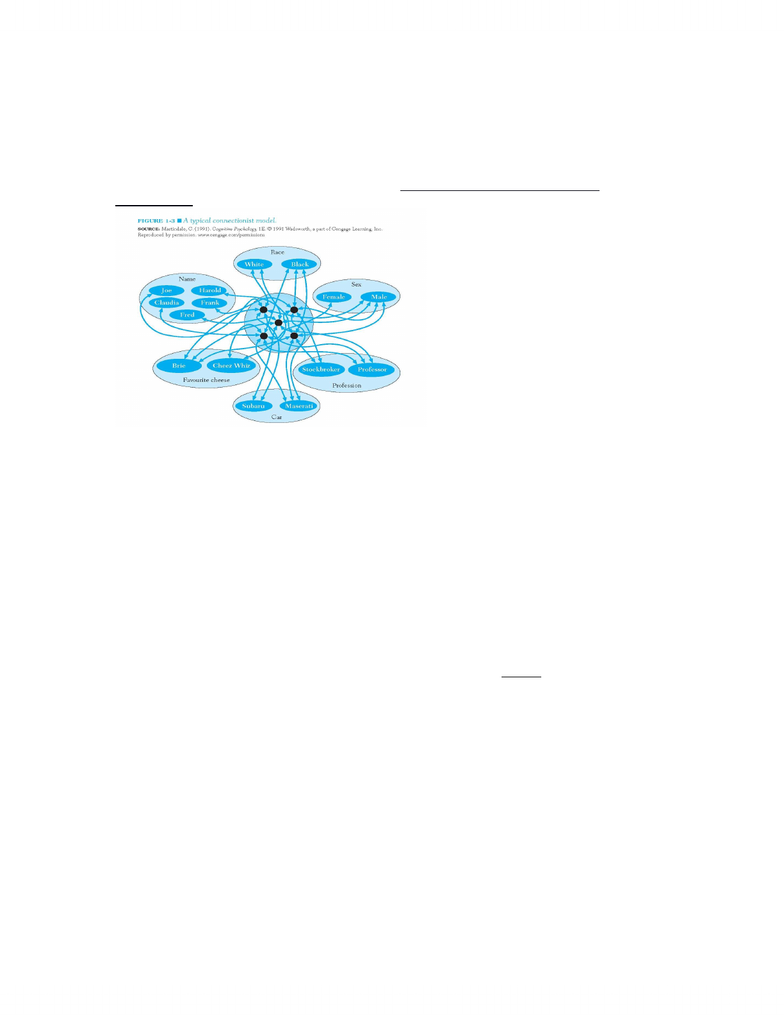 3
Connectionist Models:
Neural networks
- Simple neuron-like elements code patterns of activation across a large population of such elements
- Units are connected by weights that are modifiable by learning
- Positively weighted leads to activation
- Negatively weighted leads to inhibition
- Items (e.g., a letter, a word, a meaning) are represented by a pattern of activation called PARALLEL
PROCESSING.
Major Assumptions of Approaches:
-Cognition will be understood best by uncovering the basic mechanisms or processes underlying
cognition
-Mechanisms are stable across situations and can only be revealed under rigorously controlled
conditions
-Therefore… research must be done in the lab.
The Evolutionary Approach - We understand a system best if we understand the evolutionary pressures on our
ancestors.
-Cognition is based on a biological system that has evolved over many generations
-Over time we have evolved special purpose cognitive mechanisms
The Ecological Approach - Cognitive activities are shaped by culture, context and situation
-Focused on studying cognition in everyday contexts
-Relies more on natural observation as method
SUMMARY
1. One popular dichotomy that continues to be hotly debated is that between:
(i)Empiricism - emphasis on experience and learning
(ii)Nativism - emphasis on what is innate.
2. We covered four major schools of thought that have framed cognitive questions:
(i)Structuralism - seeks to discover the principles that explain our conscious experience and identify the
simplest essential units of the mind
(ii)Functionalism - aim is to understand the function of the mind - the ways in which mental functions let
individuals adapt to their environment
(iii)Behaviorism - aim is the scientific study of behavior, an observable consequence of psychological
experience.
(iv)Gestalt - holds that psychological phenomena cannot be reduced to simple elements but must be
analyzed and studied in their entirety.
www.notesolution.com

The key is the association between experiences. Plato"s cave metaphor - the matrix and the cave. Focus on elemental components of mind; describe conscious experience in terms of: mode, quality, intensity and duration. Report on the basic elements of consciousness. Not internal perception but experimental self observation. Must be done in laboratory under controlled conditions. Regarded psychologies mission to be the explanation of our experience. Must study the whole organism in real-life situations. Studied mental imagery in both laboratory and naturalistic settings. Intelligence, morals and personality were innate: wanted individual differences in these cognitive faculties. His invention of tests and questionnaires to assess mental abilities inspired later cognitive psychologists to develop similar measures. Focus on the holistic aspects of conscious experience (i. e. what order is imposed in perception) Rejected structuralism, functionalisms, and behaviourism as offering incomplete accounts of psychological and, in particular, cognitive experiences. Experience simply described as given, never analyzed (e. g. , i see a book)