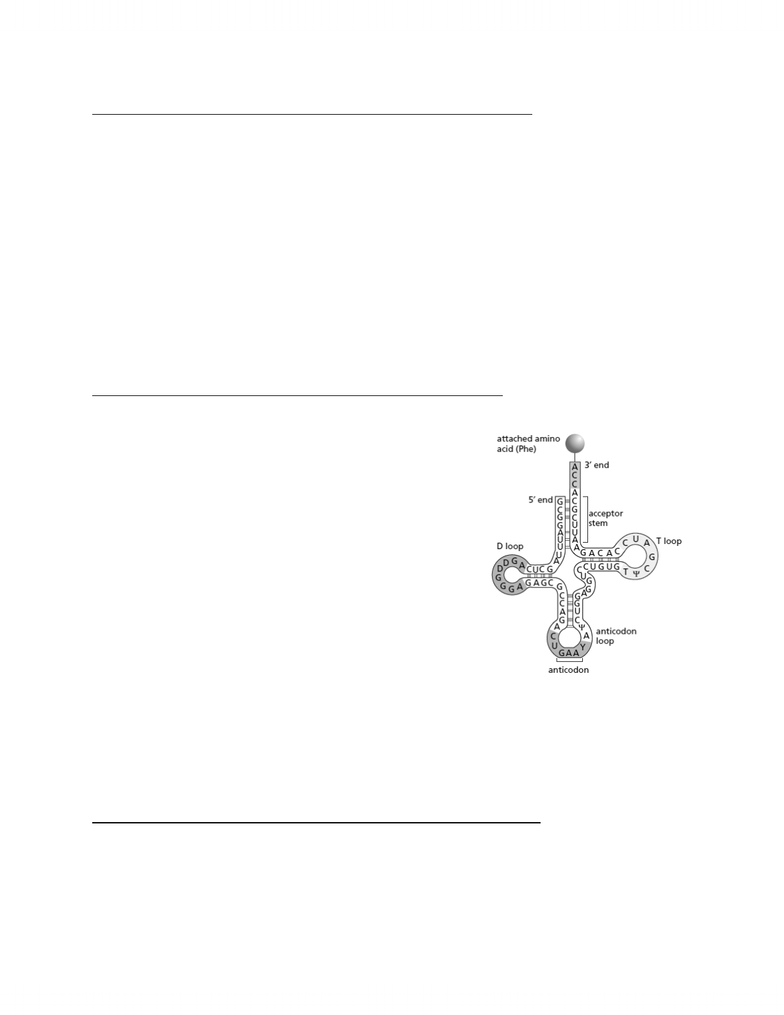 From RNA to Protein
An mRNA Sequence Is Decoded in Sets of Three Nucleotides
-the conversion of RNA into protein represents a translation
-translation into the amino acid sequence of a protein is done through the genetic
code
-RNA is a linear polymer of 4 different nucleotides, and since each codon (3
nucleotides) produces one amino acid; there are 4×4×4=64 possible combinations of
three nucleotides
oThe difference between 20 amino acids, and a potential for 64 is due to the
fact that the code is redundant and some amino acids are specified by more
than one codon
-In principle, an RNA sequence can be translated in any one of three reading
frames, depending on where the decoding process begins
tRNA Molecules Match Amino Acids to Codons in mRNA
-The translation of mRNA into protein depends on adaptor molecules that recognize
and bind to both the codon and the amino acid
oThese adaptors are called tRNA (transfer
RNAs); roughly 80 nucleotides in length
-tRNA folds into a cloverleaf-like shape
-Two regions of unpaired nucleotides situated at
either end of the L-shaped molecule are crucial to
the function of tRNA in protein synthesis
-One of these regions forms the anticodon, a set
of 3 consecutive nucleotides that pair with the
complementary mRNA codon
-The other region is the single-stranded 3’ end
where amino acids that match the codon attaches
to the tRNA
-Due to the redundancy of the genetic code, some amino acids have more
than one tRNA and some tRNAs can base-pair with multiple codons
-Certain tRNAs can tolerate a mismatch (wobble) at the 3rd codon position; explains
why so many alternative codons for an amino acid differ only at the 3rd nucleotide
tRNAs Are Covalently Modified Before They Exit the Nucleus
-Eukaryotic tRNAs are synthesized by RNA polymerase III
oOriginally synthesized as larger precursor tRNAs, trimmed to produce
mature tRNAs
oSome tRNA precursors contain introns that must be spliced out
www.notesolution.com
Unlock document 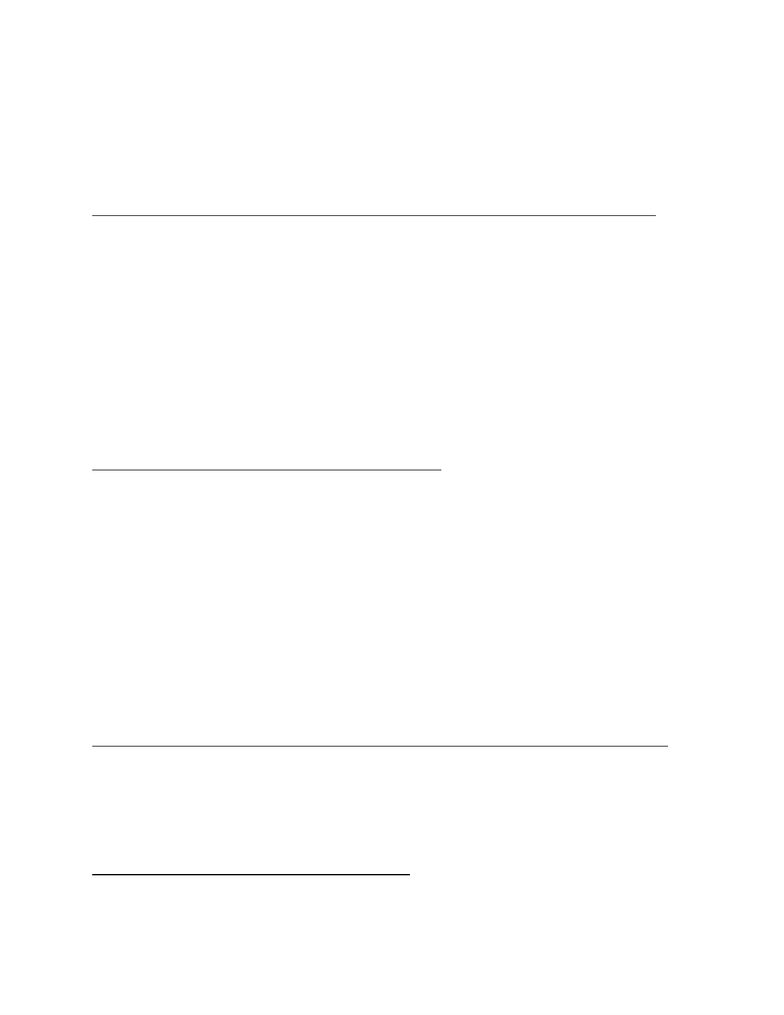 Cut-and-paste mechanism catalyzed by proteins (not like pre-mRNA
splicing)
oTrimming and splicing reactions are considered to be quality-control steps
-All tRNAs are modified chemically – nearly 1 in 10 nucleotides is an altered version
of the standard ribonucleotides (Eg. deamination of adenosine = inosine)
Specific Enzymes Couple Each Amino Acid to Its Appropriate tRNA Molecule
-aminoacyl-tRNA synthetases – recognize and covalently attach correct amino
acid to its tRNA
omost cells have different synthetase enzymes for each amino acid
obacteria have fewer synthetases; each synthetase responsible for many amino
acids
-the synthetase-catalyzed reaction attaching the amino acid to the 3’ end of the tRNA
is one of many reactions coupled to the energy-releasing hydrolysis of ATP resulting
in a high-energy bond between the tRNA and the amino acid
othis energy is later used to covalently link the amino acid to a growing
polypeptide chain
Editing by tRNA Synthetases Ensures Accuracy
-the selection of the correct amino acid by the tRNA synthetase is done by a two-step
mechanism
o1. The correct amino acid has the highest affinity for the active-site pocket of
its synthetase, and so is favoured over the other 19.
o2. When tRNA binds the synthetase, it tries to force the amino acid into a 2nd
pocket in the synthetase; the correct amino acid won’t fit while similar
AAs will fit
-The tRNA synthetase must also recognize the correct set of tRNAs
otRNA synthetases recognize the matching tRNA anticodon; these synthetases
contain three adjacent nucleotide-binding pockets, each of which is
complementary in shape and charge to a nucleotide in the anticodon
Amino Acids Are Added to the C-terminal End of a Growing Polypeptide Chain
-the fundamental reaction of protein synthesis is the formation of a peptide bond
between the carboxyl group at the end of a growing polypeptide chain and a free
amino group on an incoming amino acid  a protein is synthesized step-wise from
its N-terminal to C-terminal end
The RNA Message Is Decoded in Ribosomes
-protein synthesis occurs in the ribosome and in rRNAs
-eukaryotic ribosome subunits are assembled at the nucleolus
www.notesolution.com
Unlock document 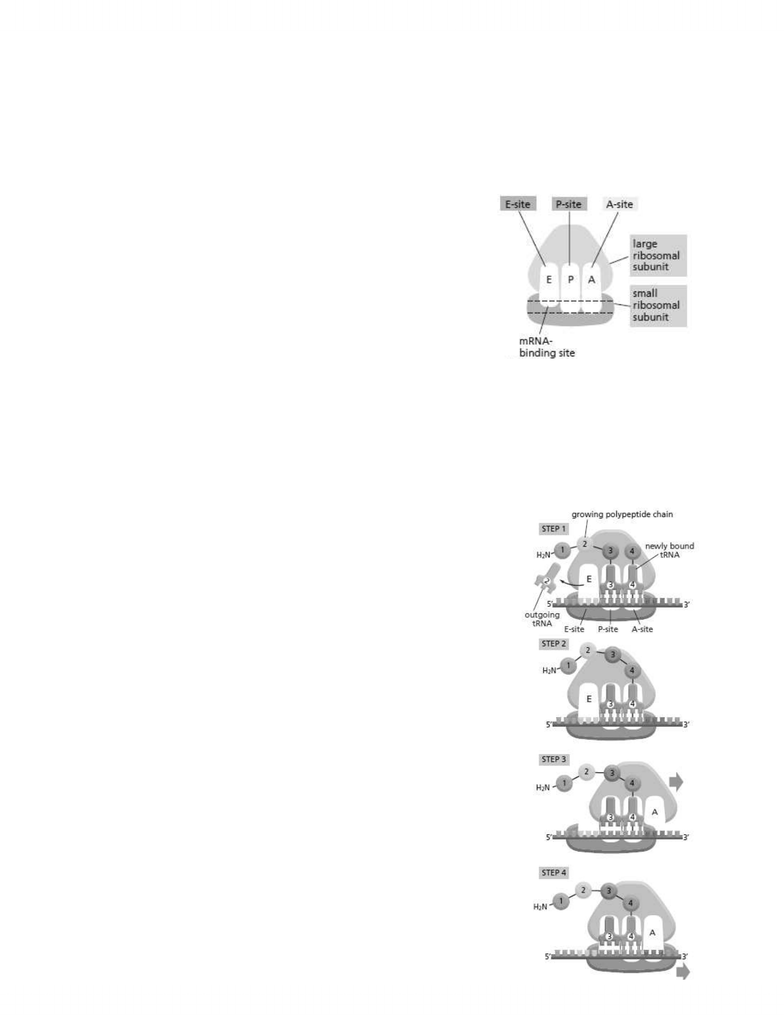 -eukaryotic and prokaryotic ribosomes are similar in structure
oboth have one large and one small subunit
osmall subunit provides framework on which tRNAs are matched to codons
on the mRNA
olarge subunit catalyzes the formation of peptide bonds linking amino acids
together into a polypeptide chain
-a ribosome contains 1 binding site for mRNA, and
another 3 (A-site, P-site, E-site) for tRNAs
otRNA molecules are held tightly at the A and
P sites only if their anticodons form base
pairs with a complementary codon on the
mRNA molecule
othe A and P sites are close enough for their
tRNA molecules to be forced to form base
pairs with adjacent codons on the mRNA molecule
Formation of the RNA chain:
1. tRNA carrying the next amino acid binds to the
A-site by forming base pairs with the mRNA codon
positioned there (so that the A and P site contain
adjacent bound tRNAs)
2.carboxyl end of the polypeptide chain is released
from the tRNA (by breaking a high-energy bond between
tRNA and its amino acid at the P-site and joined to the
free amino group of the amino acid linked to the tRNA
at the A-site forming a new peptide bond; this reaction is
catalyzed by a peptidyl transferase contained in the
large subunit
3. the large subunit shifts forward, moving the
acceptor stems of the two tRNAs to the E and P sites of
the large subunit
4. the small subunit and its bound mRNA move
exactly three nucleotides, resetting the ribosome so it is
ready to receive the next aminoacyl-tRNA
www.notesolution.com
Unlock document