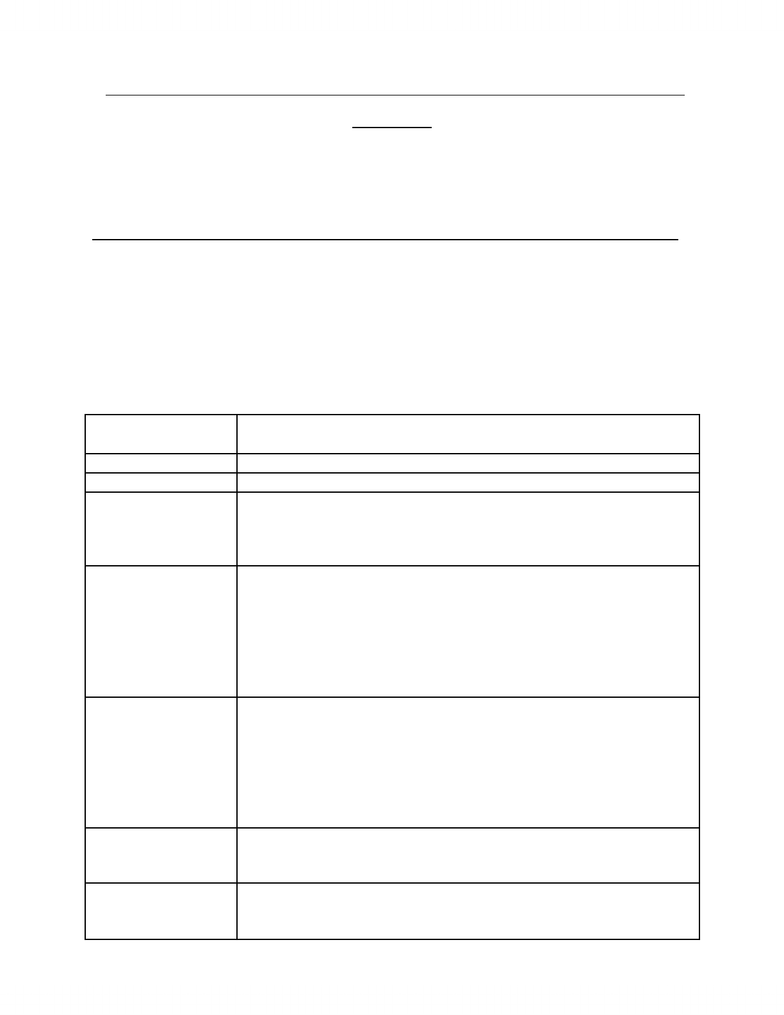 Chapter 12 – Intracellular Compartments and Protein
Sorting
Lecture 5+6: (pg. 695-704, 721-727)
-Each organelle contains its own enzymes and other specialized molecules
The Compartmentalization of Cells
All Eukaryotic Cells Have the Same Basic Set of Membrane-Enclosed Organelles
- Membrane bound enzymes catalyze lipid metabolism, and oxidative phosphorylation
and photosynthesis both require a membrane to couple the transport of H+ to the
synthesis of ATP
-Intracellular membrane systems form enclosed compartments separated from the
cytosol
oCreates functionally specialized aqueous spaces within the cell
-Because lipid bilayers are impermeable to most hydrophilic molecules, membrane
must contain transport proteins to import/export specific metabolites
Intracellular
CompartmentFunction
NucleusPrincipal site for DNA and RNA synthesis.
CytoplasmContains cytosol and cytoplasmic organelles.
Cytosol-Site of protein synthesis and degradation.
-Performs most of the cell’s intermediary metabolism
(degrading small molecules and synthesize other to provide
building blocks for macromolecules).
Endoplasmic
reticulum-RER has many ribosomes on its cytosolic surface  they
synthesize both soluble and vital membrane proteins destined for
secretion to cell exterior or for other organelles.
-Proteins are transported into the ER as they are synthesized
(NOT AFTER, but DURING).
-functions as a store for Ca2+ ions
-tubes extend from nucleus throughout entire cytosol
Golgi apparatus- receives proteins and lipids from ER
-consists of stacks of disc-like compartments called Golgi
cisternae
-Dispatches lipids and proteins from the ER to various
destinations
-Is able to covalently modify them en route
-located close to the nucleus
Mitochondria/
chloroplasts-generate most ATP used to drive reactions
-chloroplasts are specialized versions of plastids (can also
serve as storage for food and pigment molecules)
Lysosomes-contain digestive enzymes that degrade dead organelles and
macromolecules taken in from outside the cell by endocytosis
-endycytosed material pass through endosomes on the way
www.notesolution.com
Unlock document 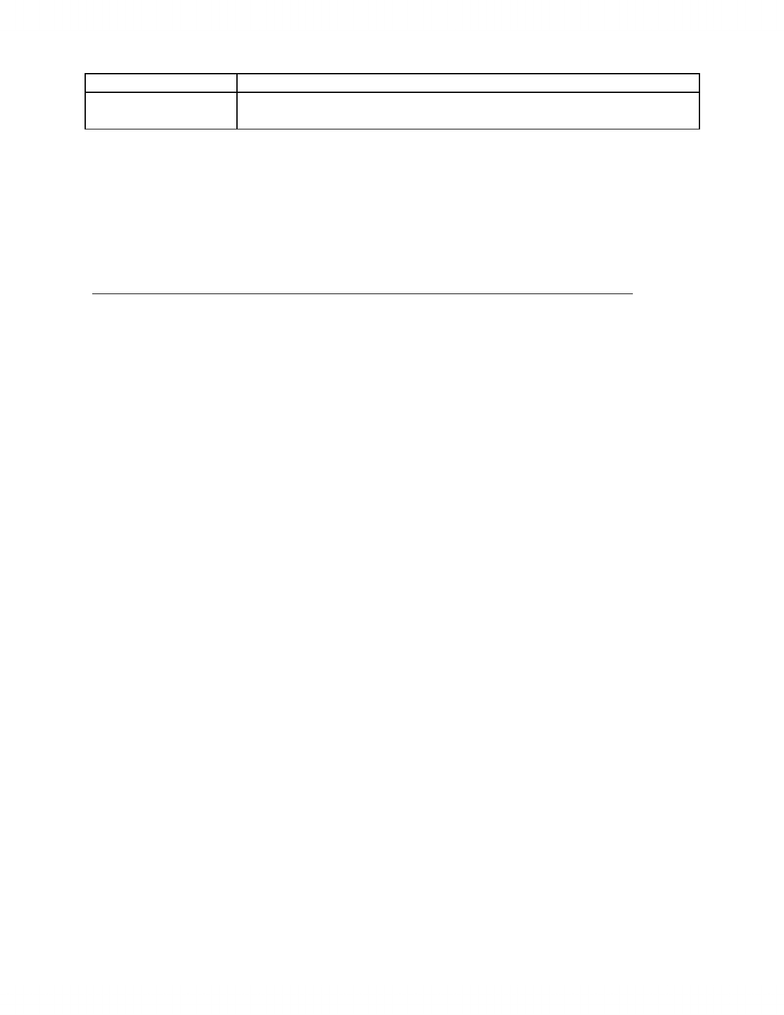 to lysosomes
peroxisomes-small vesicular compartments that contain enzymes used in
various oxidation reactions
-These organelles can have additional properties that differ from cell type
to cell type!
- Membrane-enclosed compartments occupy about ½ the cell volume
-IF the microtubules in a cell are depolymerised, Golgi apparatus fragments and
disperses throughout the cell, ER network collapses toward the cell center
Evolutionary Origins Explain the Topological Relationships of Organelles
-Precursors of the first eukaryotic cell likely resembled bacteria
oPlasma membrane, but no internal membranes
oPlasma membrane provides all membrane-dependent functions (pumping
ions, ATP synthesis, protein secretion, lipid synthesis)
-Today, the abundance of internal membranes can be seen as an adaptation to an
increase in size
oeukaryotic cells have a smaller ratio of surface area to volume, and its
plasma membrane has too small an area to sustain the many vital functions
that membranes perform  internal membrane systems of a eukaryotic cell
alleviate this problem
-The evolution of internal membranes correlated with the specialization of membrane
function
oEg. thylakoid vesicles in chloroplasts form when chloroplasts in green leaf
cells develop from proplastids, small precursor organelles present in all
immature plant cells
oThese organelles are surrounded by a double membrane and develop
according to the needs of the differentiated cells:
turn into chloroplasts in leaf cells, but into organelles that store
starch, fat, or pigments in other cell types
oWhen converted into chloroplasts, specialized membrane patches form, fold
inward, and pinch off from the inner membrane of the proplastid. Resulting
vesicles form the thylakoid, which harbours all of the chloroplast’s
photosynthetic machinery
-The inward folding and pinching off of specialized intracellular membrane
structures from the plasma membrane creates organelles with an interior that is
topologically equivalent to the exterior of the cell
otheir interiors communicate extensively with one another and with the
outside of the cell via transport vesicles, which bud off from one organelle and
fuse with another
-the inner membrane of mitochondria and plastids corresponds to the original plasma
membrane of the bacterium, while the lumen of these organelles evolved from the
www.notesolution.com
Unlock document 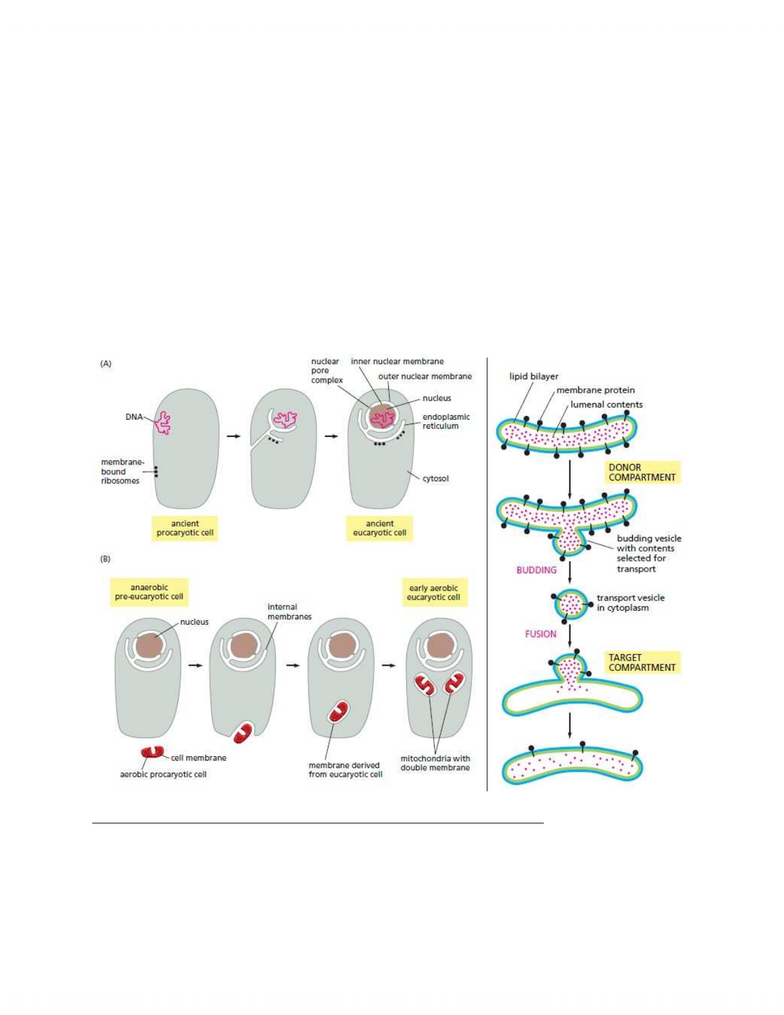 bacterial cytosol  expected from endocytic origin, these two organelles are
surrounded by a double membrane, and they remain isolated from the extensive
vesicular traffic that connects the interiors of most of the other membrane-enclosed
organelles to each other and to the outside of the cell.
-The evolutionary scheme described above groups the intracellular compartments in
eukaryotic cells into four distinct families:
o (1) the nucleus and the cytosol, which communicate with each other through
nuclear pore complexes and are thus topologically continuous (although
functionally distinct)
o(2) all organelles that function in the secretory and endocytic pathways—
including the ER, Golgi apparatus, endosomes, and lysosomes, the numerous
classes of transport intermediates such as transport vesicles that move
between them, and possibly peroxisomes
o(3) the mitochondria
o(4) the plastids (in plants only).
Proteins Can Move Between Compartments in Different Ways
-All protein synthesis except for mitochondria and plastids occur on ribosomes in the
cytosol
-Sorting signals in amino acids direct their delivery to locations outside the cytosol
- Mechanism for protein movement:
oGated transport – proteins move between cytosol and nucleus through
nuclear pore complexes in the nuclear envelope
www.notesolution.com
Unlock document