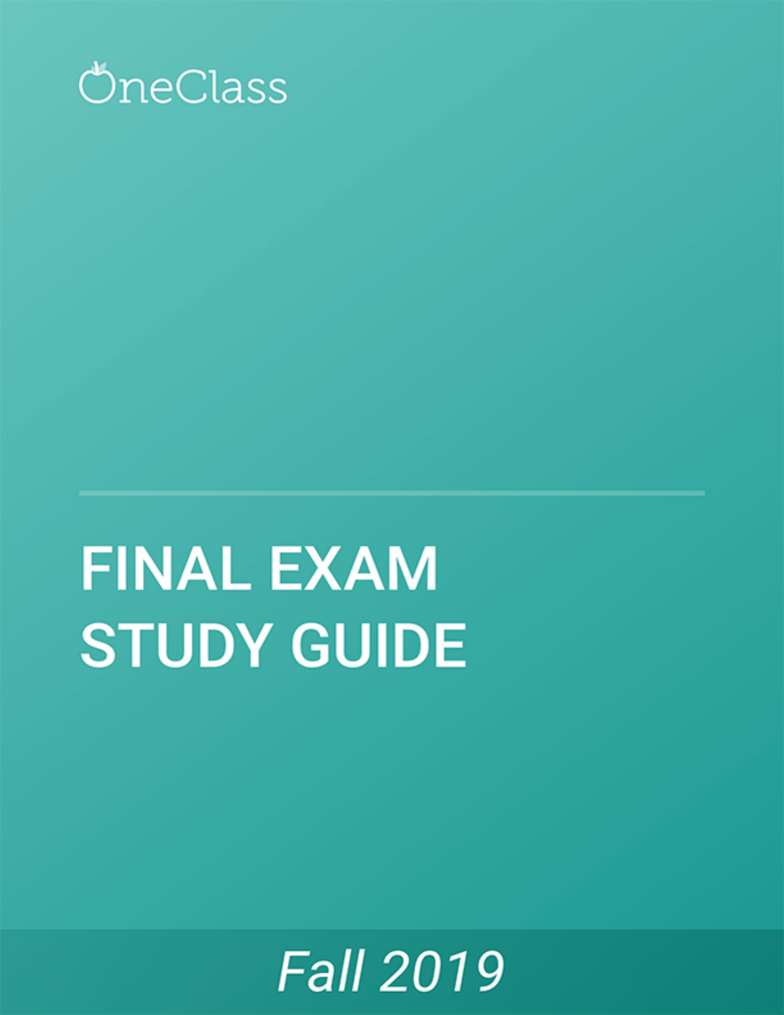 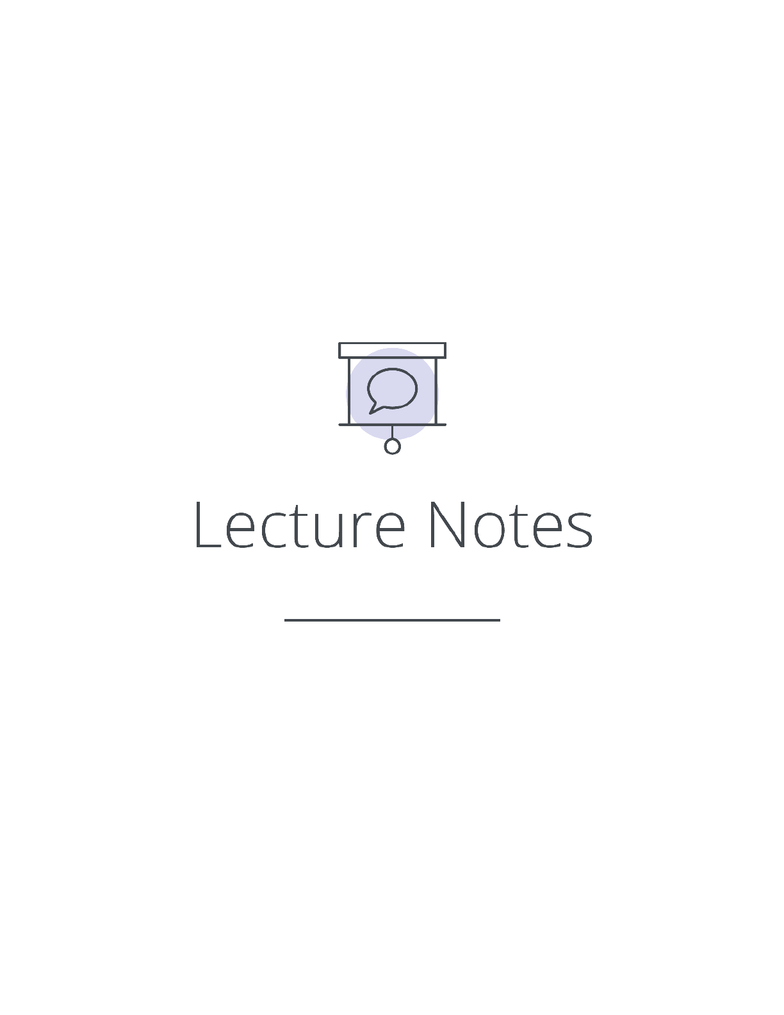 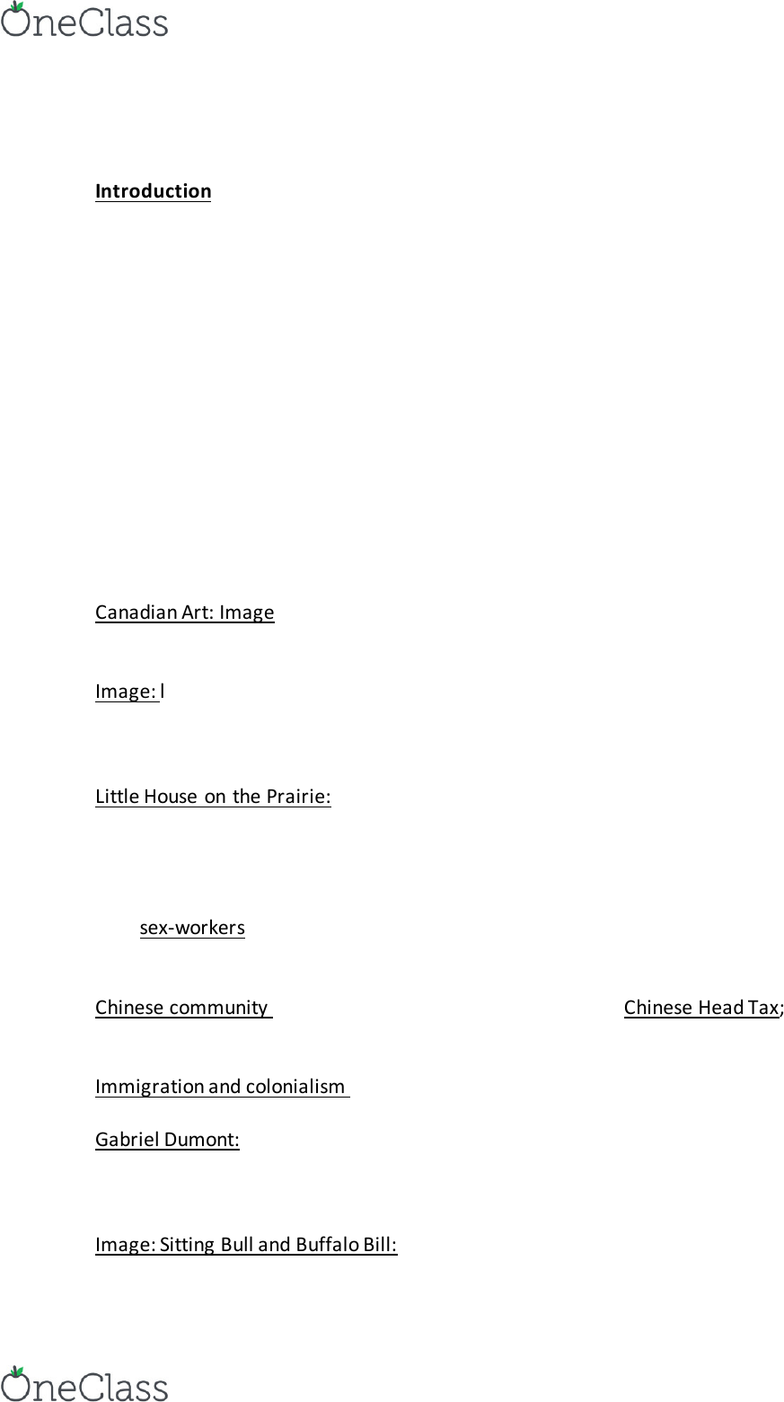 The “Wild” West in Canada - HIS318
Introduction
Course Scope:
- Manitoba, Saskatchewan, Alberta, BC, and areas of Yukon, Nunavut, and NWT
- Highlights of pre-history to pre-contact – 24k BP – 1610 CE [new finds, may be off 100k
years!]
- Post-contact economies, cultures and politics – 1611-1869
- “The Last Best West”: Rise and fall of the wild west: 1860-1914 [US ends in 1890 when
the frontier closes]
- Regional cultures and communities in the migration era, 1873 onwards
Themes:
- Economic, political, cultural, gender and sexual history
- Indigenous historical perspectives
- Crime, health, and incarceration
- Symbolism, memory, myth and the roots of the modern West
Canadian Art: Image: Red Cedar mask from the west coast;
Brian Jungen image, indigenous style masks made with Air Jordans – modern transnational
items used for indigenous historical expression – living culture, not of the past only.
Image: last spike driven in the Canadian Pacific Railway by Donald Smith: est firm border with
the US, could mobilize troops etc – declaration of Canada as a nation from coast to coast. Not
pictured: the Chinese migrants who built the last stretch – their work makes them present in
the photo.
Little House on the Prairie: idyllic family, not necessarily representative of the people of the
west.
A lot of the first women in these settlements were entrepreneurs, settlement builders, sex
workers, and of course – not white. Women were patrons of culture, fueled political
movements, sway elections – history of power, of conflict, etc.
How sex-workers are treated today in Canada: obviously at risk of higher rates of violence, but
our culture ignores the roles they played in est the country. If we acknowledge their past, their
present could change.
Chinese community in the colonial west: 1885 – intro of the Chinese Head Tax; now they can’t
bring their families to Canada, difficult to import workers to business, etc; but those
communities endured and thrives due to resilience, resistance of racist taxes.
Immigration and colonialism in all forms – not just whites. Settles and immigrant areas were
sign posts – a way of the gov’t cementing hold on Indigenous territories.
Gabriel Dumont: Led the rebellion in the NW that caused Sir JAMc to send the army to the West
– Indigenous uprising against the gov’t trying to take control of the territory but not living up to
their obligations and promises to the territory.
Image: Sitting Bull and Buffalo Bill: iconic, staged image of Indian and cowboy, for a show. Hired
real ppl from the WW.
find more resources at oneclass.com
find more resources at oneclass.com
Unlock document 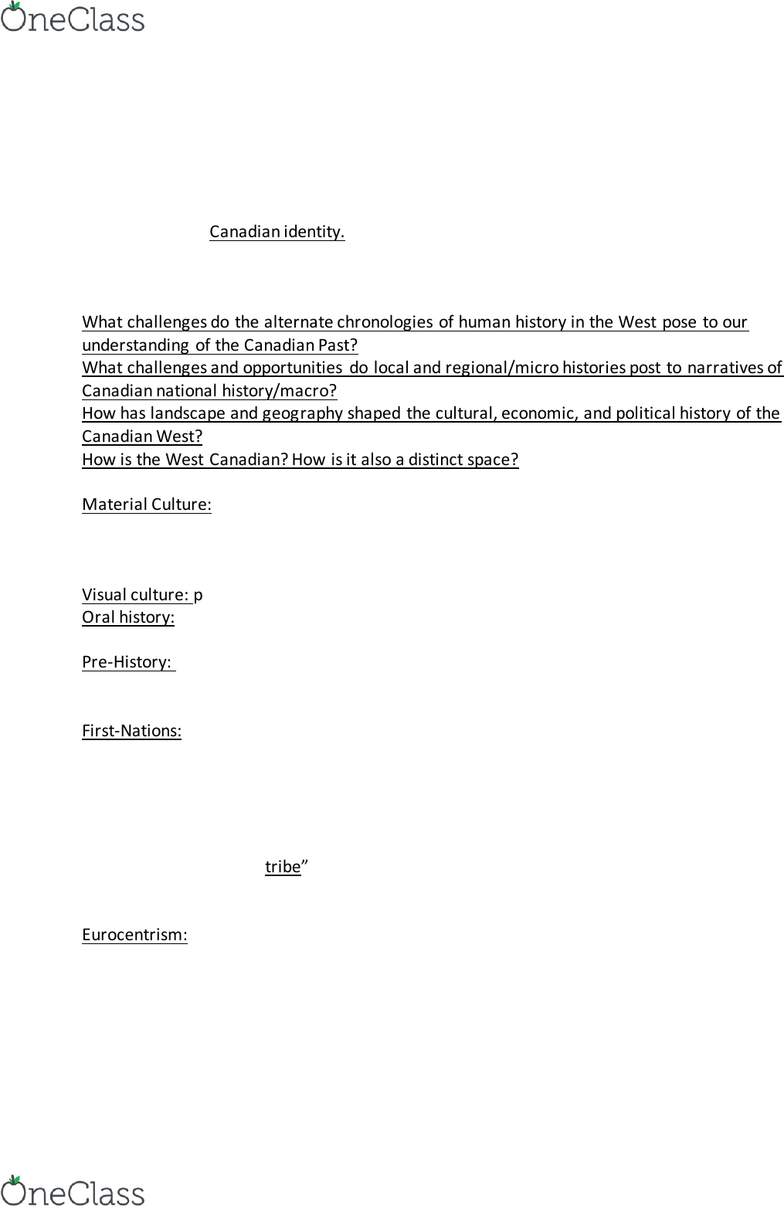 Sitting Bull of the Sioux: the US signed a treaty with the Sioux until gold was found, and the US
wanted to break the treated. The Sioux rebelled, led by Bull, and killed Custer. Came to Canada
to flee the US, and signed agreements with Canada. James Walsh: a head Mountie negotiator
with Sitting Bull, who sacrificed his career to honor the deal the gov’t made with the Sioux.
This is a picture of the man who killed the Jesus-like figure of the US military. Sitting Bull
becomes part of Canadian identity.
There is the real WW, and the image of the WW – both powerful; both shape law, identity,
culture, etc.
What challenges do the alternate chronologies of human history in the West pose to our
understanding of the Canadian Past?
What challenges and opportunities do local and regional/micro histories post to narratives of
Canadian national history/macro?
How has landscape and geography shaped the cultural, economic, and political history of the
Canadian West?
How is the West Canadian? How is it also a distinct space?
Material Culture: objects: can be a voice when there is no text, esp with new tech.
Buildings – Image: Birtle Residential School, 1910s, 40%+ mortality rate. Abandoned building
that no one knows what to do with because of its horrific history. Vandalized and destroyed out
of hate or shame.
Visual culture: photographs
Oral history: interviews
Pre-History: Treaties often involves references to early habitation, so pre-history is important.
Pre-contact for Canada is different than the states – much earlier than Columbus, at least year
1000
First-Nations: one of 3 general categories of Indigenous Canadian peoples, in addition to Metis
and Inuit. These are national bodies with their own cultures, languages, laws, etc.
Metis are Indigenous and non-Indigenous.
F-N also a term to refer to specific bands/communities [Peguis First Nation] – a community can
be called a first nation. There are 630 First nation communities in Canada, and others not
necessarily recognized.
This replaces the word “tribe” that failed to recognize them on equal terms with European
peoples. English as a language can restrict our historical understanding. F-N recognizes the ppl
on equal footing with Europeans.
Eurocentrism: excludes other views on the world, distorts historical vision, restricts how we can
talk and see. Limits chronologies to linear views.
Dipesh Chakrabarty: “First in Europe, then elsewhere” – me must reorient the way with think
about history.
“Common Sense” a euro idea of est stories, common because they are naturalized from
childhood, and therefore invisible. Not actual natural, though.
Euro cult and history is the real cult and history from this view. Has a set of views that est things
as real or not real, legit or not;
find more resources at oneclass.com
find more resources at oneclass.com
Unlock document