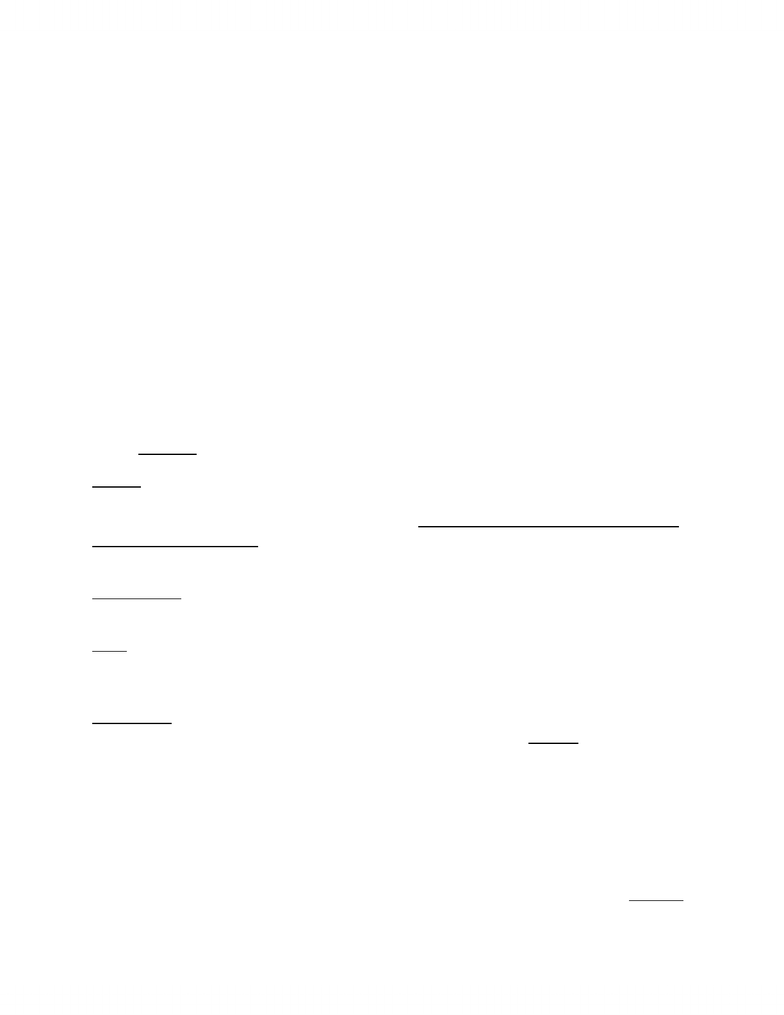 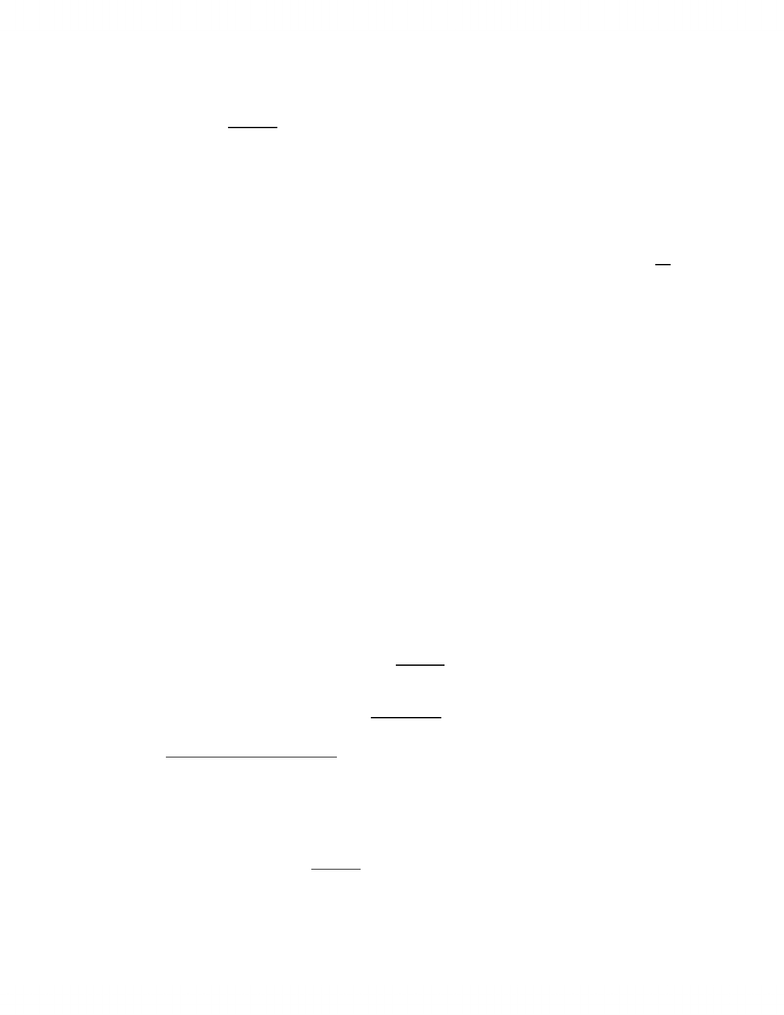 Archimedes’ Principle: the buoyancy force on a submerged object is equal to weight of fluid that is
displaced by the object SLIDE 23
Imparting Energy: He football has more ‘spring’ to it so kicker ‘imparts more energy’ to it
Coefficients of Restitution: =1 for elastic collisions, =0 for completely inelastic collisions (objects stick
together), 0<CR<1 for inelastic collisions
The Kicking Experiment: both air and He football struck with blow from same hammer moving at 5.64
m/s; for each trial the ball left the collision with a speed of 9.52 m/s due to this force; as expected no
changes to the coefficient of restitution were observed since pressure in balls was the same
Theory of Kicking Experiment: assume all the hammer hits is the ball and stops, so all its momentum is
transferred to the ball, then pair=phammer mairvair=mhammervhammer and similarly for He football
mHevHe=mhammervhammer
Since air has greater mass than He, vhe/vair=mhe/mair= 415.5g/411.6g ≈1.0095; horizontal distance ball
travels, the range, is proportional to the square of velocity; thus, when kicked with the same force the
He ball should travel 2% further than the air ball since it is going 1% faster (0.8yd for a 44yd punt,
negligible increase)
Air Drag and Helium Football: without air drag...the kicked football’s trajectory is fully determined by the
(constant) force of gravity, which pulls all objects to the surface at the same rate; if given the same
initial speed, the air and He footballs will travel the same distance, with the same hang time; if the
applied force is the same (as with a real kicker), the He football moves 1% faster and thus, travels 2%
further due to conservation of momentum
Two important things happen when the air drag force is included:
1. the acceleration is no longer constant but changes as the drag changes, since drag is proportional to
the square of velocity; the drag in the vertical direction is in the same direction as the force of gravity as
the football moves up, but, the vertical drag is in the opposite direction as the force of gravity when the
football descends
2. the drag force is independent of mass but the acceleration due to the drag force depends on mass,
since a=F/m, unlike gravity whose acceleration is independent of mass; thus, the acceleration due to the
drag force is less for a more massive object; the acceleration of the football is a= (Fgrav-Fdrag)/m=g-
(Fdrag/m); as m increases the drag term gets smaller; drag decreased distance of kick by about 15yd,
with peak height decreases by about 7yd
Drag force vs Gravity: vertical drag force is downward as the ball goes up and is initially about half as
large as gravity; the drag force is upward as the ball goes down; by the time the ball is near the ground
its magnitude is about 35% of gravity; negative means drag points downward
Unlock document 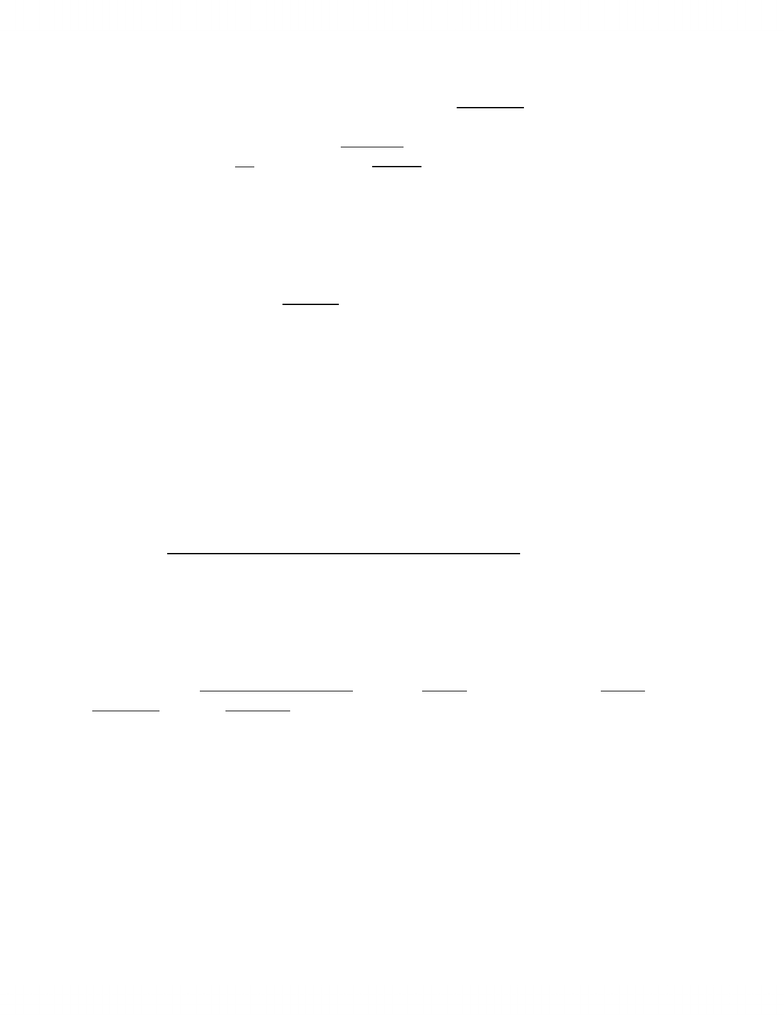 Model Same Initial Force: if assuming ball leaves kickers foot at same speed the air football travels
slightly further than the He football (greater inertia, acceleration due to drag decreases with increasing
mass); if assume kicker kicks each ball with same force He football goes slightly further )He ball has
higher initial speed), but not significantly farther SLIDE 42
Fluid Dynamics Notes
A fluid is... liquid, gas and plasma; continually flows under an applied force; in common usage liquids are
fluid substances that have no shape when not in a container; the distinction btwn solids and fluids is
often blurred – viscoelastic fluid, Silly Putty (flows, but over extended time period)
Gas as a Fluid:
- Difference btwn gas and liquid: though molecules in liquids are not organized in lattice
formation like solids, the forces btwn them are strong; molecules in gases have small forces
btwn them
- The major difference in their compressibility: the change in volume of a liquid or solid with
changing pressure is small compared to gas
Fluid Dynamics: study of fluids in motion; assumptions for an ideal fluid include...fluids are
incompressible, temperature is constant (no convection), steady flow (velocity and pressure do not
change with time, velocity and pressure can change from point to point, but smoothly)
Streamlines: an imaginary path a particle would follow if released in a fluid...can streamlines cross?
Flow Types
- Laminar: a fluid element travels on a smooth path predictable by Newton’s laws
- Turbulent: the velocity and pressure fluctuate rapidly about the mean flow (no complete theory
of turbulence exists)
When streamlines pinch off and form vortices, the flow is rational; when streamlines are straight or
gently bend the flow is irrotational
Rotantional Flow: tangential and normal to streamlines uniform circular flow is rotantional; when a
vortex is present the components rotate opposite to one another, so perpendicular sticks fasten
together exhibiting irroational flow by vortex; uniform flow btwn parallel walls is often rotational; flow
can be rotational but not turbulent
Simplifications for Ideal Fluid: 1. the fluid is incompressible (changes in pressure don’t affect volume)
2. Temperature is steady 3. Flow is steady, so velocity and pressure do not change with time
4. Flow is laminar, not turbulent 5. The flow is irrotational 6. No friction in the fluid (viscosity)
Unlock document