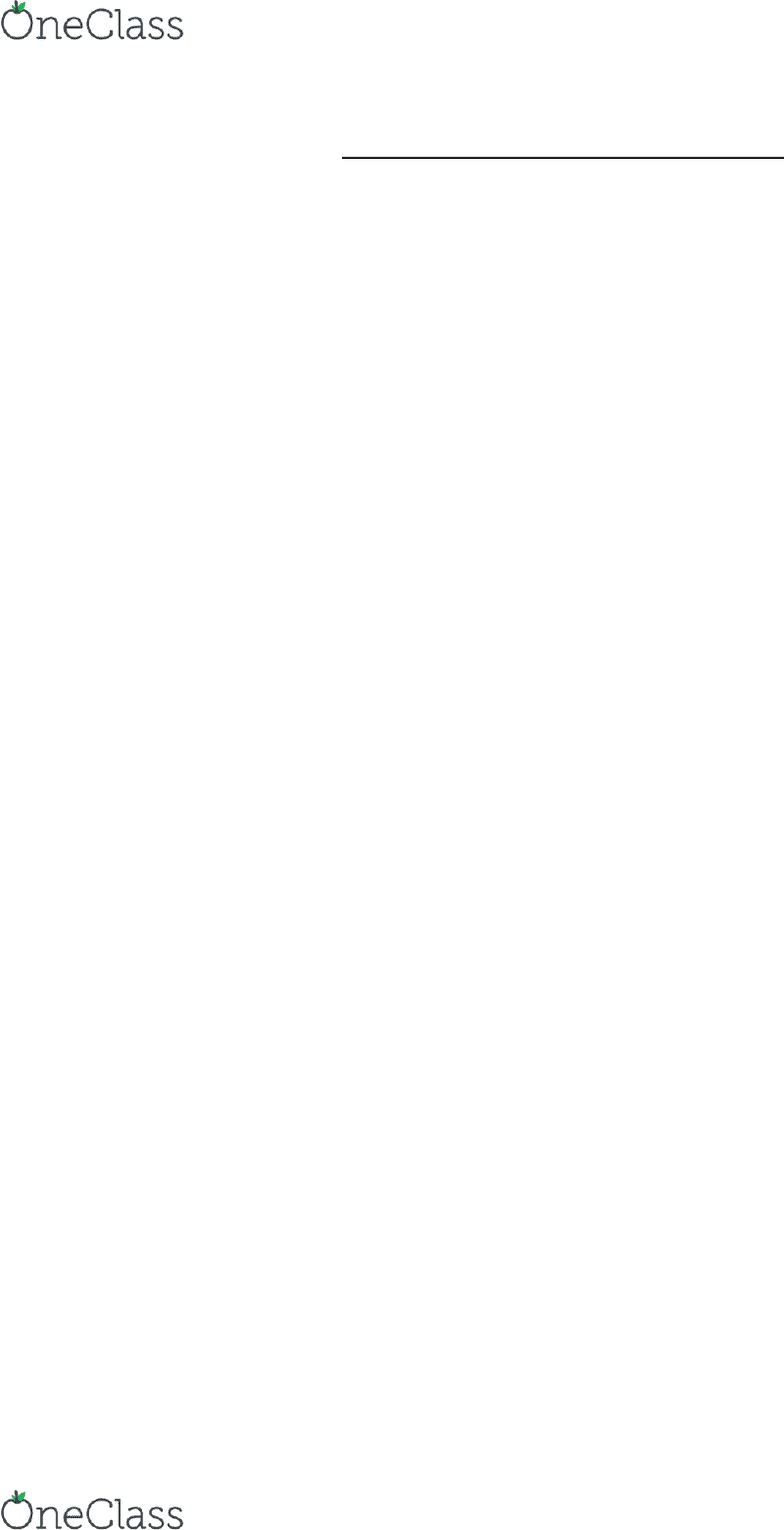 Psychology Chapter 7: Learning and Adaption
Adapting to the Environment
Learning
• When experience produces a relatively enduring change in behavior and capabilities of an
organism
• In science, we measure learning by actual change in performance, not whether you know
how to perform a task (knowing how versus doing)
Learning and the Environment
We can view learning as a process of personal adaption to the ever-changing conditions of our
environment
Behaviorist Approach
• Believe that the laws of learning apply to all organisms (learn the same way)
• Focused on observable actions whether than the unobservable mental state of an organisms
• Treated test subjects as a blank tablet, to which they inscribed learning experiences
Habituation and Sensitization
• Habituation is a decrease in the strength of response to a repeated stimulus
o Universal learning technique (all organisms)
o All organisms to block out uneventful stimuli and save up their energy
o Researchers habituate test subject to their presence to prevent from hindering results
o Note: Habituation and sensory adaption are not the same thing; you still receive the
senses, but you learned to block them out
• Sensitization is an increase in the strength of response to a repeated stimulus
o Often present in response to strong or noxious stimuli
o Purpose is to protect from harmful stimuli
o Present in a wide range of organisms
o The more you encounter a harmful stimulus, the better you become at reacting to it
Classical Conditioning: Associating one Stimulus with Another
Classical (Pavlonian) Conditioning
• Association of two stimuli such that one stimulus produces a response that originally was
produced by the other stimulus
o After we come back from a concert, each time we hear one of the songs on the radio,
it makes us happy as it did at the concert
• Involves learning an association between stimuli
• Occurs in many organisms
• Alerts organisms to stimuli that signal the impending arrival of important events
Pavlov’s Dogs
• Presented different types of foods to dogs and measured their natural salivary response
• Noticed that with repeated testing, dogs began to salivate before the food was even
presented (stimulated by his footsteps)
• They began to test this observation by ringing a bell before presenting dogs with food powder
o After a while, the dogs would salivate when the bell rang even if no food was present
find more resources at oneclass.com
find more resources at oneclass.com 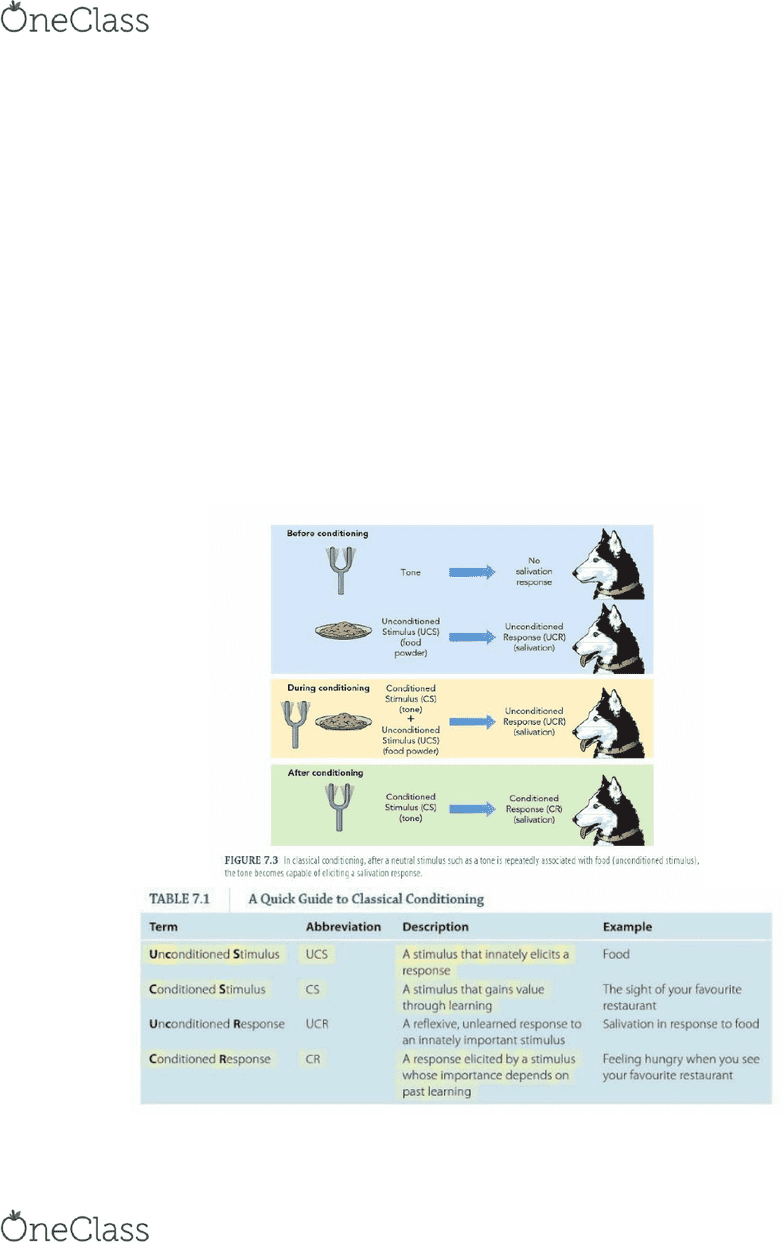 Basic Principles of Classical Conditioning
Acquisition
• The period during which a response is being learned
• E.g. Dogs
o When we first ring the bell, the dogs hear it but don’t respond to it in any way (neutral
stimulus; no salivation response)
o We then place food in the dog’s mouth, and it begins to salivate naturally
▪ The food in this case is an Unconditioned stimulus (UCS); a stimulus for
which no learning is required (natural response)
▪ The salivation is an Unconditioned Response (UCR); no learning required
for the response to be displayed
o Next, the tone and food are paired in what is called a learning trial
o After several learning trials, the tone is presented by itself, and the dog salivates even
though there is no food
▪ The tone has become a Conditioned stimulus (CS) through association
▪ Salivation in turn became a Conditioned response (CR)
• Note: Salivation in this case is considered a UCR and CR
o When the response is a natural (unlearned) reflex, it is a UCR
o When it is a learned response, it is a CR
find more resources at oneclass.com
find more resources at oneclass.com 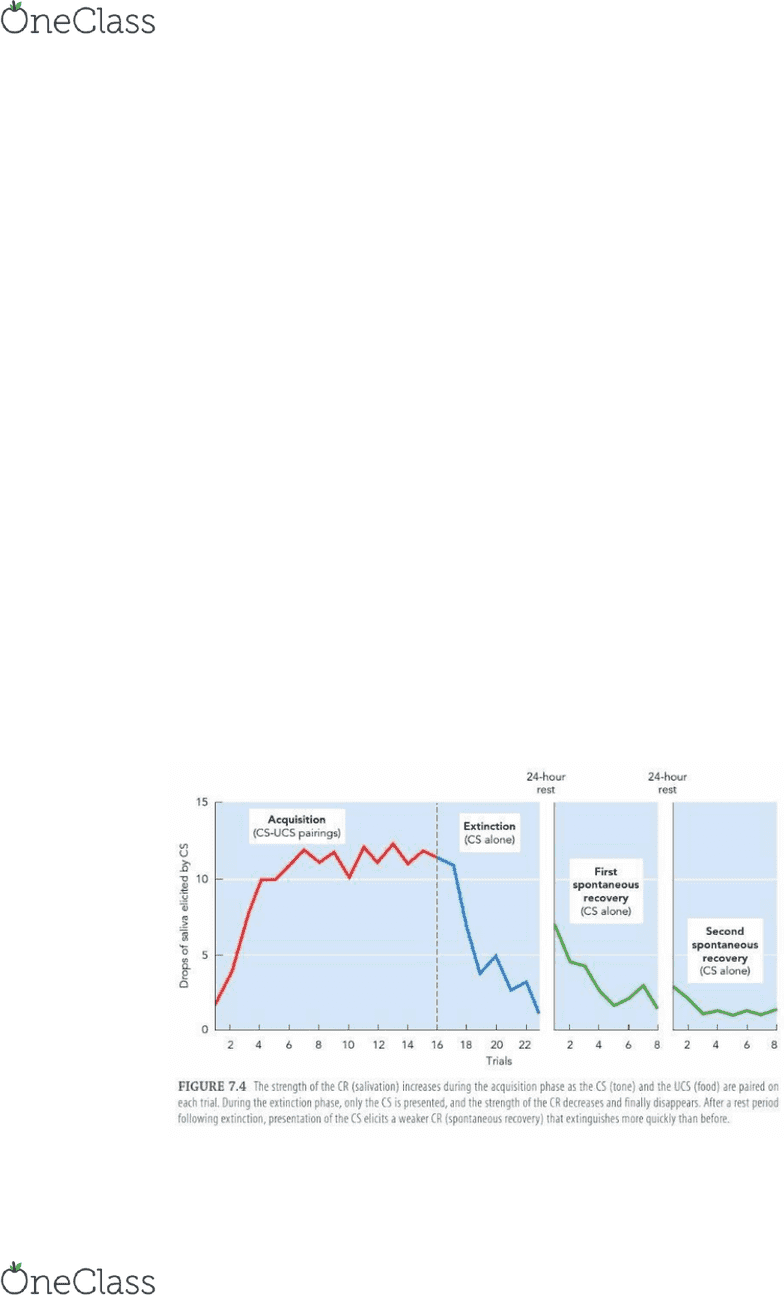 • CS typically must be paired multiple times to establish a strong CR, however sometimes only
one pairing is needed (a bad car crash results in a fear of driving)
• Furthermore, the stronger the UCS, the better
• The sequence and time interval during which the CS-UCS are paired is also important
o Forward short-delay pairing; tone appears first, and is still present when the food
appears
▪ Most effective
o Forward trace pairing; tone comes on and off, then food is presented
▪ Forward pairing is important overall because the CS acts as a single for the
UCS
o Simultaneous pairing; CS and UCS presented at the same time
▪ Not as effective
o Backward pairing; UCS first, the CS
▪ Slowest, learning sometimes doesn’t occur at all
Extinction and Spontaneous Recovery
• Extinction is the process by which the CR weakens, and eventually disappears
o For this to occur, the CS must be repeated over and over WITHOUT the UCS, causing
the CR to weaken (extinction trials)
o For Pavlov, the dogs eventually stopped salivating when the tone was presented
without the food multiple times
o Occasional repairing is required to maintain the CR
o NOTE: The CR is NOT erased, rather it is masked
• Spontaneous Recovery is the spontaneous recovery of an extinguished CR after a rest period
and with no new learning trials
o Usually weaker than original CR
o Easier to extinguish in the absence of UCS
o Multiple extinction trials are required in order to decrease the chances of
spontaneous recovery (patients hoping to get rid of phobias will not be successful
after one trial)
find more resources at oneclass.com
find more resources at oneclass.com

Learning: when experience produces a relatively enduring change in behavior and capabilities of an organism. In science, we measure learning by actual change in performance, not whether you know how to perform a task (knowing how versus doing) We can view learning as a process of personal adaption to the ever-changing conditions of our environment. Involves learning an association between stimuli: occurs in many organisms, alerts organisms to stimuli that signal the impending arrival of important events. Acquisition: the period during which a response is being learned, e. g. Ucs: simultaneous pairing; cs and ucs presented at the same time, backward pairing; ucs first, the cs. Instrumental learning (trial and error: law of effect: a response followed by a (cid:498)satisfying(cid:499) consequence will be more likely to occur (foundation for the school of behaviorism) Reinforcement: when a response is strengthened by the outcome that follows it (increase in frequency of response, a reinforcer (the outcome of the response) is needed.