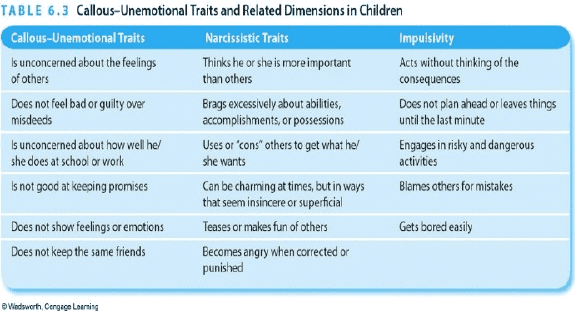 Callous-unemotional specifier new to DSM-5
•Important in differentiating children who have CD, who are at
risk for poor outcomes – because of their callous-
unemotional personality
Categories vs. Dimensions
•No qualitative differences (i.e., not categorical in nature)
•The more symptoms, the poorer your outcome
oHow much of it you have predicts your outcomes
Frick et al. (1993) meta-analysis of factor analyses of antisocial/disruptive child
behavior
•Dimensions suggesting why behaviors go together or are correlated (factor
analyses)
•Dimension of destructive vs
non-destructive and covert vs
overt
oFour quadrants
Property
violations
Aggression
Status violations
(kids do things
that are kind of alright for adults to do)
Oppositional
Related Constructs
•Antisocial personality disorder (ASPD)
oDiagnosed in adults only
oChildren’s personalities are too plastic, they’re still changing and
developing
•Psychopathy
oTrait capturing individual differences in boldness, disinhibition, and
meanness
oStudied in adults, mostly

Odd and cd: classification: dsm-5: oppositional defiant disorder, angry/defiant/vindictive behavior lasting at least 6 months developmentally excessive pattern. Losing temper, argumentative, defiant, blames others, touchy, angry. Behaviors must be more frequent than normative for age they are supposed to decline after a certain age. Rated for severity mild, moderate, or severe: based on pervasiveness of symptoms degree to which they exhibit symptoms in multiple domains. Extremely noncompliant kids with poor emotional control negativistic, disobedient, hostile toward authority. Poorly equipped to manage a child behavioral problems patience, managing their own affect: dsm-5: conduct disorder, antisocial behavior as well, persistent & repetitive pattern of violating norms and rules lasting at least twelve months, including: Serious violation of rules (e. g. , truancy, staying out all night) Important in differentiating children who have cd, who are at risk for poor outcomes because of their callous- unemotional personality.