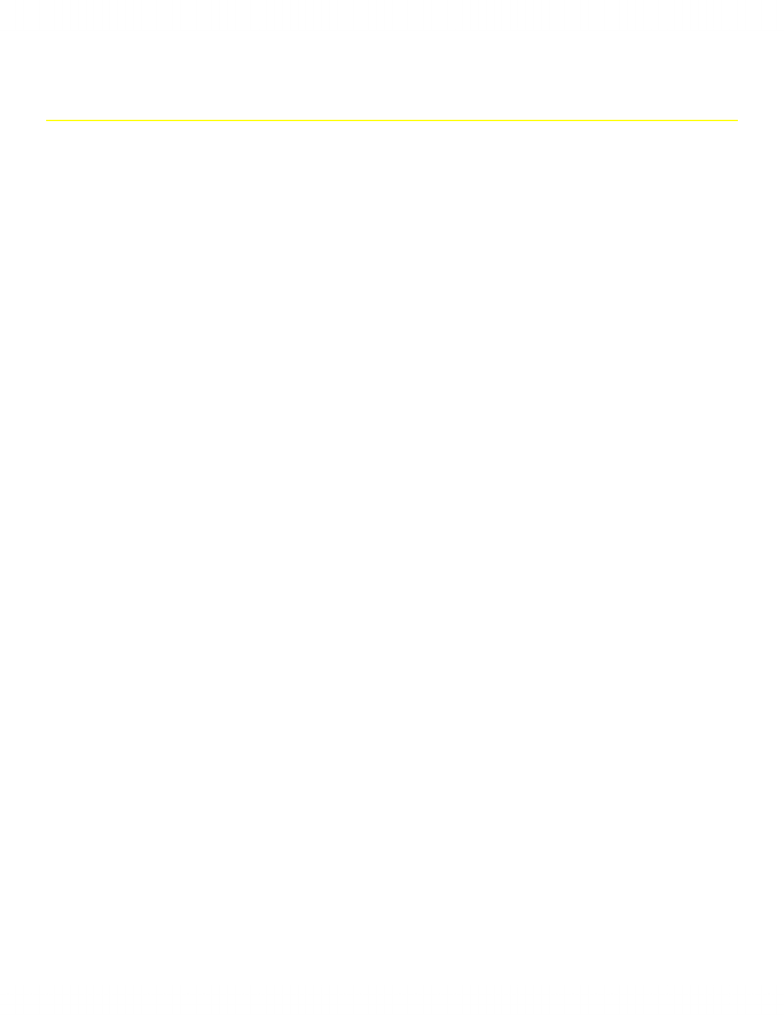 Hormones & Behaviour – Final Exam
Notes
Post Midterm 2
Homeostasis (Eating and Drinking Behaviour)
•Homeostasis, which is a term first coined by Walter B. Cannon in 1929, is the process by
which organisms maintain a relatively constant internal environment/optimal level.
Across time, the physiological parameter (i.e. water, temperature, Na chloride, etc.) will
vary, but will always be brought back to a set point by the body’s internal regulators
and/or behaviours that are often hormonally regulated. In order for these homeostatic
regulators to work, they must be able to detect upper and lower variation from a set
point, not just one or the other (real-life example is a HVAC temperature system). It is
often the case that behavioural homeostatic mechanisms are only engaged if the
physiological mechanisms fail; for example, if a rat’s adrenal is removed, it cannot
naturally retain enough Na through the action of aldosterone, but if given the choice of
drinking salt water, it can maintain its internal Na levels behaviourally. As was the case
with reproductive hormones being co-opted to facilitate/regulate mating behaviour, so
hormones involved in physiological homeostasis are co-opted to facilitate
homeostatic behaviours.
•For any system to maintain homeostasis, it must have the following: (1) a reference
value/set point for the controlled variable; (2) some sort of detection mechanism; (3)
the ability to mobilize the organism to make changes that will return the variable to the
normal range; (4) the ability to recognize when the change has occurred and then
shut off the mobilization through negative feedback.
•Homeostasis in terms of thermoregulation is especially important in
endothermic/homeothermic/warm-blooded animals, which cannot rely on the
environment to maintain a constant internal temperature. On the contrary, cold-
blooded/ectothermic animals must manipulate their environment to control body
temperature. An example with iguanas showcases this example. If iguanas are placed in
a terrarium with a heating source at one end and a cooling source at another such that
there is a relatively smooth temperature gradient along the terrarium, they will tend
to settle down in an area where they can maintain a constant internal
temperature of 370C, which seems to be the set point for most normal animals. However,
the set point can be changed according to environmental conditions. For example, if an
animal is infected with bacteria, an adaptive response would be to increase its body
temperature in order to kill as many of the pathogens as possible and increase
chances of survival; indeed, in the terrarium example outlined above, iguanas injected
with bacteria that maintain an internal temperature of about 420C are much
more likely to survive than iguanas who maintain temperature of only 34-360C.
•Fluid balance:
Water is extremely important to all animals because it is important for many
metabolic processes, and acts as a solvent for many physiologically relevant ions,
vitamins, macromolecules, etc. However, water is not often stored, and is readily
lost through the above processes, as well as perspiration and respiration, which
means that water must be retained by the kidney and/or periodically replenished.
Water and salt balance are tightly linked because within the kidney, if salt
moves one way, water usually follows by osmosis (“salt sucks”) in order to
maintain a relatively constant body composition.
Thirst is unitary perceptual experience that is NOT caused by a dry mouth, but
by internal cues; proof of this statement comes from the fact that if fluids are
infused directly into the body (i.e. bypass the mouth, so the mouth stays
dry), drinking behaviour decreases. There are two distinct types of thirst
caused by two different mechanisms: (1) osmotic thirst is caused by a decrease 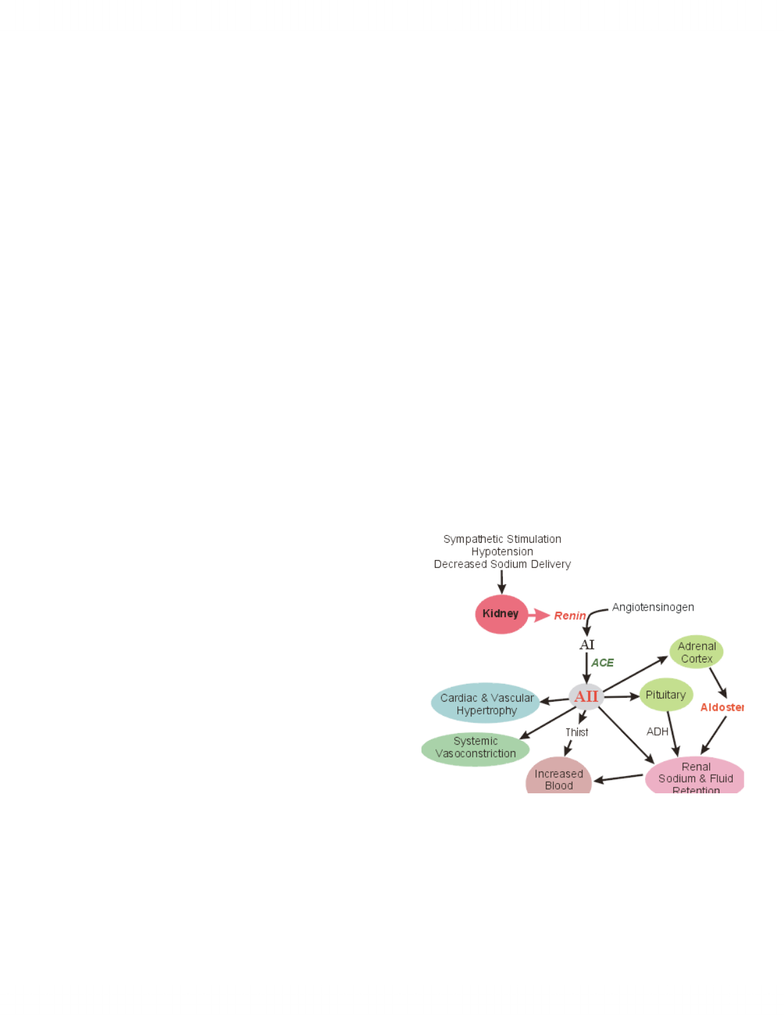 in the intracellular fluid volume brought about by consumption of salty foods,
which creates a hypertonic extracellular fluid that draws water out of the cell; (2)
hypovolemic thirst is caused by a decrease in blood volume or blood
pressure, and because it doesn’t simply involve a shift in interstitial osmolarity,
water, Na, and other ions must also be replaced to alleviate hypovolemic thirst.
However, kidney function is compromised by hypovolemia, and causes a
decrease in plasma osmolarity (a potent stop-drinking stimulus), so
hypovolemic rats don’t drink enough to attain normal plasma osmolarity levels.
Hypovolemia can be induced experimentally either by inducing haemorrhage, or via
subcutaneous injection a large molecule called polyethylene glycol (PEG) that
reduces blood pressure and induces drinking behaviour.
Endocrine regulation of fluid balance:
Vasopressin (AVP or ADH) acts on the kidney tubules (specifically the distal
convoluted tubule) to increase water retention, so a lack of ADH leads to
diuresis, a major symptom of diabetes insipidus (DI). An animal model of DI
are Brattleboro rats; these rats urinate copiously and must drink lots of
water to maintain fluid balance, but exogenous ADH treatment in these
rats restores level of drinking back to normal levels. There are two
types of stimuli associated with a need to balance body fluids that
stimulate ADH release from the posterior pituitary: (1) dehydration of
cerebral osmoreceptors (often located near 3rd ventricle) causes them to
send signals to the paraventricular nucleus (PVN) and supraoptic
nucleus (SON) of the hypothalamus, which is where ADH is made. In
response to mild dehydration, the signal to release ADH is sent; however,
if dehydration persists, then the signal to dis-inhibit drinking behaviour
is sent; (2) reduction in blood volume/pressure is detected by
baroreceptors in cardiac blood vessels, which send signals to the PVN
and SON to secrete ADH, which causes vasoconstriction, thus increasing
blood pressure closer to normal values. These receptors also send a direct
signal to the brain via the vagus nerve to stimulate drinking.
Angiotensin II is another
potent vasoconstrictor that
comes from the blood (i.e. not
an endocrine gland) and is
released in response to
hypovolemia. In response to
low blood volume, the brain
signals the kidney to release an
enzyme called renin, which
acts on a circulating precursor
called angiotensinogen to form,
among other things,
angiotensin II. The role of
angiotensin in drinking
behaviour is controversial,
but it certainly does stimulate
the release of aldosterone, a hormone with an unequivocal connection to
drinking (see below).
Aldosterone (produced in zona glomerulosa of adrenal cortex) acts on the
ascending Loop of Henle to increase Na retention, which causes more
water to be reabsorbed as well. It is chronically stimulated in response to
angiontensin II and is tonically maintained by ACTH from the anterior
pituitary.
Na balance:
There are large species variations in Na levels (i.e. freshwater vs.
saltwater fish, humans from industrialized vs. developing countries), and 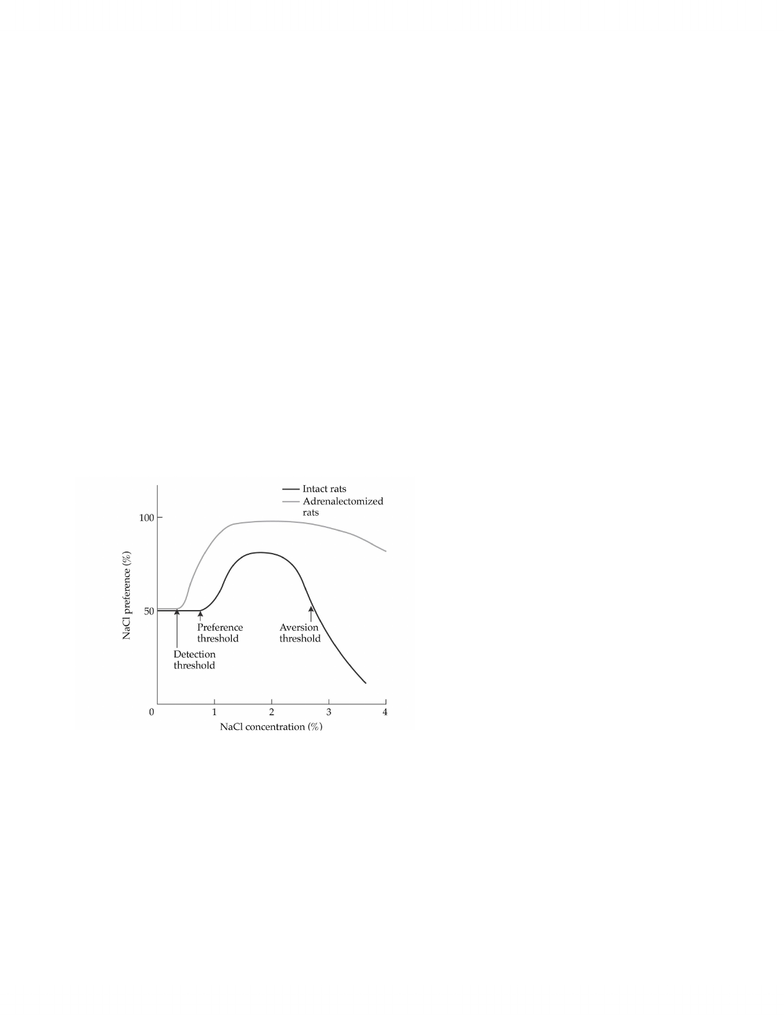 terrestrial animals, who, unlike marine animals, aren’t constantly
surrounded by Na, have developed adaptations to deal with fleeting Na
supplies, such as excretion of uric acid instead of urea. There may also be
radical environmental variation in Na levels (recall the European rabbits
brought over to Australia). Rabbits living in the snowy mountains
(extremely low Na) crave salt (i.e. salt licks), have low Na content in their
urine, high aldosterone and a corresponding increase in the size of the
zona glomerulosa; on the other hand, rabbits living in the desert
(extremely high Na) do not show Na hunger, have high Na content in
their urine, low aldosterone, and no increase in the size of the zona
glomerulosa. Overall, these rabbits show physiological (urine Na
content), morphological (size of zona glomerulosa), and behavioural
(salt licking) adaptations to varying salt conditions.
Some animals have odd adaptations to deal with low Na. (1) Syrian
hamsters will refuse salt water after adrenalectomy (and therefore die)
unless it is infused with saccharine; apparently saccharine masks the salty
taste of the salt water. These results are reflective of that fact that Syrian
hamsters evolved in the desert, where salt is high and water is
scarce, so they have evolved behavioural mechanisms to avoid
sodium. (2) Kangaroo rats live in the desert and rarely drink water. Rather,
they liberate water from the seeds that they eat, and in order to conserve
this water, they rarely urinate (and when they do, it is highly concentrated)
because of their extremely long kidney tubules. (3) Elephant seals get
all their water from the fish that they consume.
Termination of drinking behaviour typically occurs before the water has been
absorbed, which suggests that feedback from the esophagus and stomach
may be important. Evidence
supporting this claim includes
the fact that direct fluid
infusion into stomach halts
drinking, and fistular
diversion causes an
eventual cessation of
drinking.
Hormones regulate drinking
behaviour by altering the
detection and preference
thresholds for saline vs.
fresh water. The detection
threshold is the
concentration at which
animals can tell the
difference between a saline
solution of concentration X and a pure water solution; it is determined by seeing
when adrenalectomized rats start to prefer saline over pure water. This
parameter is identical for intact and adrenalectomized rats, as determined by
a forced choice task to avoid punishment. The preference threshold is the
concentration of saline at which rats prefer that solution over pure water
solution, as determined by passively observing their drinking behaviour. This
parameter is lowered for adrenalectomized rats, which have no aldosterone
and must therefore prefer salt solutions in order to survive. Finally, the aversion
threshold is the point at which rats begin to prefer pure water to saline (i.e.
preference drops below 50%). This parameter is visible in intact rats, showing
that there is an intermediate salt concentration that they prefer; however,
adrenalectomized rats will continue to consume saline solutions that
would normally be aversive.
•Energy balance:

Homeostasis (eating and drinking behaviour: homeostasis, which is a term first coined by walter b. cannon in 1929, is the process by which organisms maintain a relatively constant internal environment/optimal level. Across time, the physiological parameter (i. e. water, temperature, na chloride, etc. ) will vary, but will always be brought back to a set point by the body"s internal regulators and/or behaviours that are often hormonally regulated. In order for these homeostatic regulators to work, they must be able to detect upper and lower variation from a set point, not just one or the other (real-life example is a hvac temperature system). As was the case with reproductive hormones being co-opted to facilitate/regulate mating behaviour, so hormones involved in physiological homeostasis are co-opted to facilitate homeostatic behaviours. On the contrary, cold- blooded/ectothermic animals must manipulate their environment to control body temperature. However, the set point can be changed according to environmental conditions.