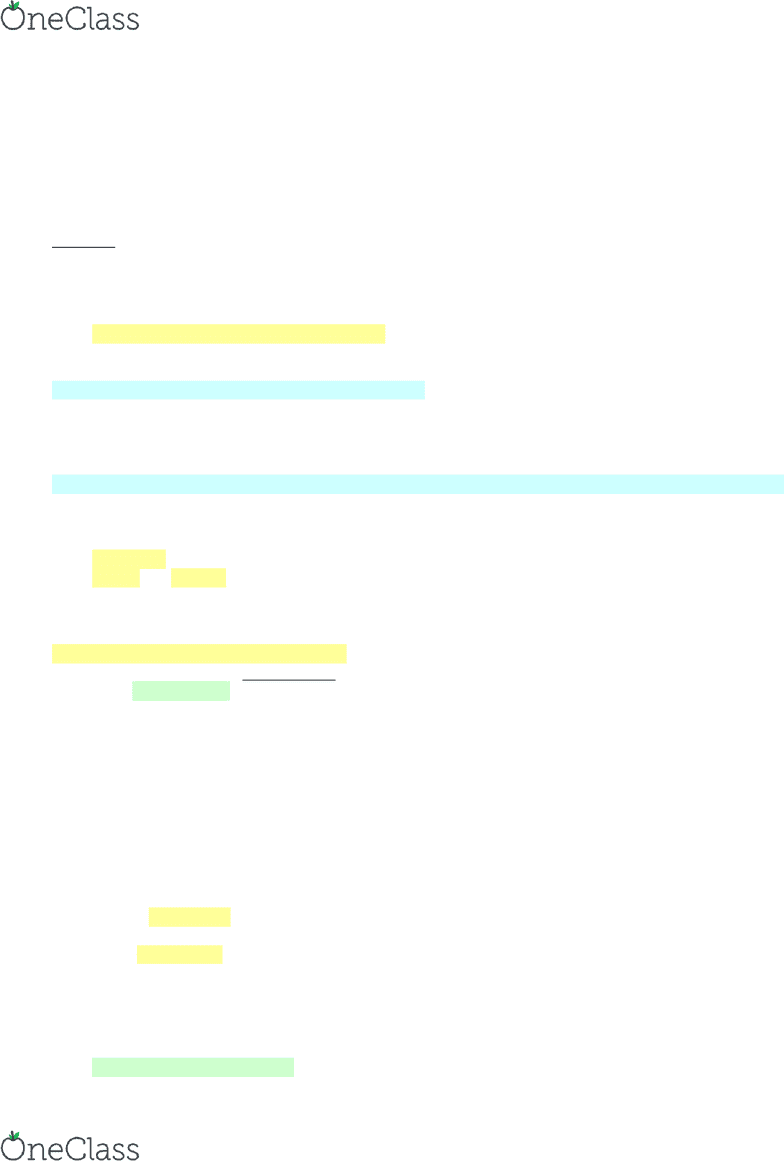 Biology Study of Life
Sunday, October 2, 2016
11:11 AM
What is life? Want to know all the aspects of life?
 Understanding how things work
 Interested on the molecular level
Module 1
Will always come back to evolution (core theme and unifying concept) therefore can be explained by evolution
 Processes are shared throughout organisms (life processes)
 Also explains diversity (evolve= can be substituted as change however in a biological context evolution
means genetic diversity among individuals in a certain population)
 Individuals do not evolve but populations do (Populations evolve through reproduction because genetic
traits are passed which would mean that the ones that are favourable will most likely be passed due to
increase in fitness)
Heritability- able to be inherited from parent to offspring (therefore favoured genes are passed)
Biodiversity
The cuttlefish changes skin tone colour to protect itself and is able to sense environment through eyes (eyespot).
Sunlight is a signal which initiates a response, this can be called a transduction pathway at the molecular level.
Transduction- Physical quantity such as light can be converted into an electrical signal such as skin tone change
Three Domain Tree of Life
All forms of life are categorized into one of three domains:
 Eukaryotes-have a nucleus that encloses their Dna (determined at the molecular level)
 Archea and Bacteria- do not have a true nucleus and are prokaryotes (at the molecular level these two
domains are slightly different)
Taxonomy
Dude, King Philip Came Over For Great Sex (Domain, Kingdom, Phylum, Class, Order, Family, Genus, Species)
 Full organism name is Genus species
 Homo sapiens (Both words italicized, but only genus has a capital letter, underline when written by
hand)
 Sometimes when the genus is too long, the short form would be by only placing the first letter of the
genus and the full species name (E. coli)
All Living Organisms
The unifying life processes (One or more cells, Require energy, Metabolism). However, despite biodiversity all
cells share similarities at the fundamental level.
 Cells are defined by a membrane, genetic info stored in DNA, containing genes to make proteins
(ribosomes- but composition of membrane might be different)
 Eukaryotes- DNA in nucleus, structure in genes is different (but codes are similar), ribosomes are
different but do the same function
 Energy- All use ATP (energy in phosphate bonds, which break and release energy), ATP--> ADP cycle
(operates the same in both cells)
 DNA- Double helix (AT, CG and sugar phosphate bonds) however, eukaryote's have multiple chromosomes
which are bigger and have a different structure than prokaryotes (nucleoid is found in prokaryotes)
Natural Selection
Evolution by Darwin stating that populations evolve by favourable traits being passed down to offspring's due to
increase in fitness.
 Light and dark coloured moths (fitness was due to favoured genes, reproduction from survivors)
find more resources at oneclass.com
find more resources at oneclass.com
Unlock document 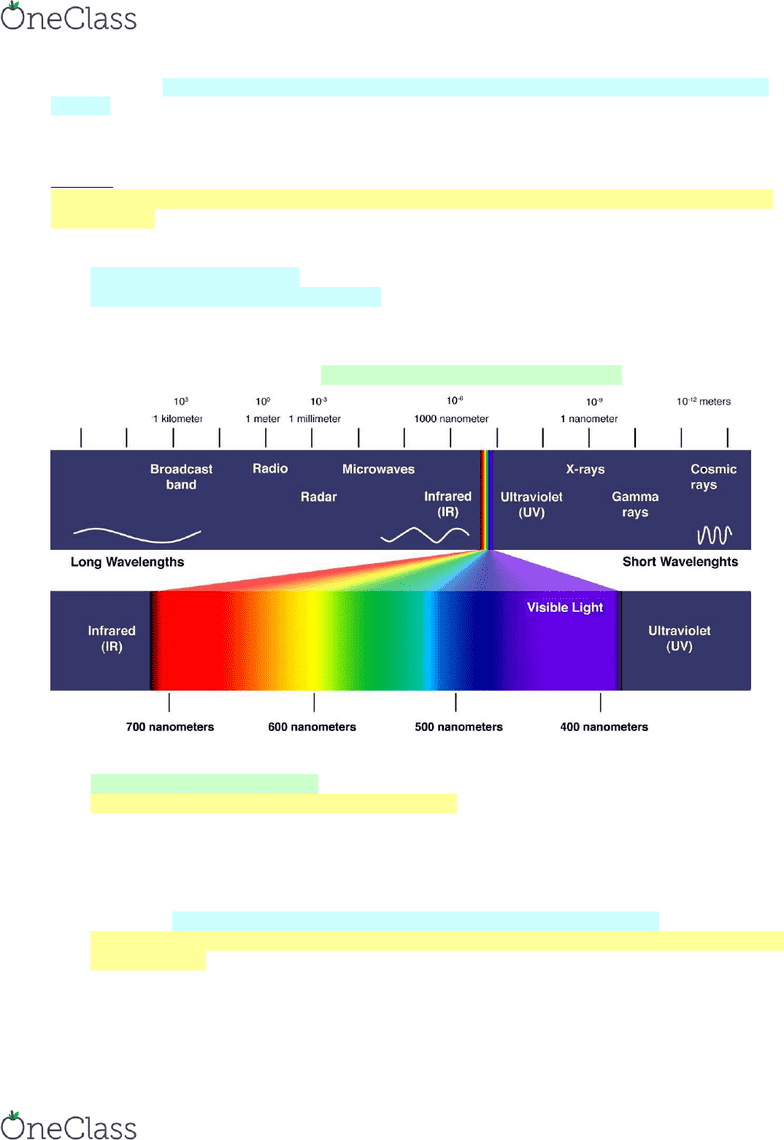 Macroevolution- Over long time periods two different species evolve from common ancestor due to geographic
isolation. The result is the two species are no longer able to reproduce with one another.
 They do have similar genetic diversity, but due to the interaction with different environment it resulted in
different genes activating
Module 2
All energy comes from the sun, it is the converting matter into energy also known as electromagnetic radiation
(Nuclear fusion)
 Life on earth because we are a good distance from the sun to support life
Matter vs. Energy
 Energy: The capacity to do work (multiple types of energy, they are interconnecting)
 Matter: Tangible substances made of matter (Sun converts matter to energy)
Electromagnetic Spectrum
Visible light is a very small band
 Wavelengths differentiate colours (Shortest wavelengths have the highest energy)
What is Light?
 Can be detected by the human eye
 Discrete particles called photons instead of wavelengths
 To be used, photons must be absorbed by pigments
 Light interacts with matter through photosynthesis (Transmitted, Absorbed, Reflected)
Pigment Structure
 All organic molecule made of carbons and hydrogens
 They have a conjugated bond structure (alternating single and double bonds of carbon)
 Delocalization of electrons which allows more availability to absorb photons of light, and they are not held
closely to nucleus
 Absorb different photons due to arrangement of bond structure
find more resources at oneclass.com
find more resources at oneclass.com
Unlock document 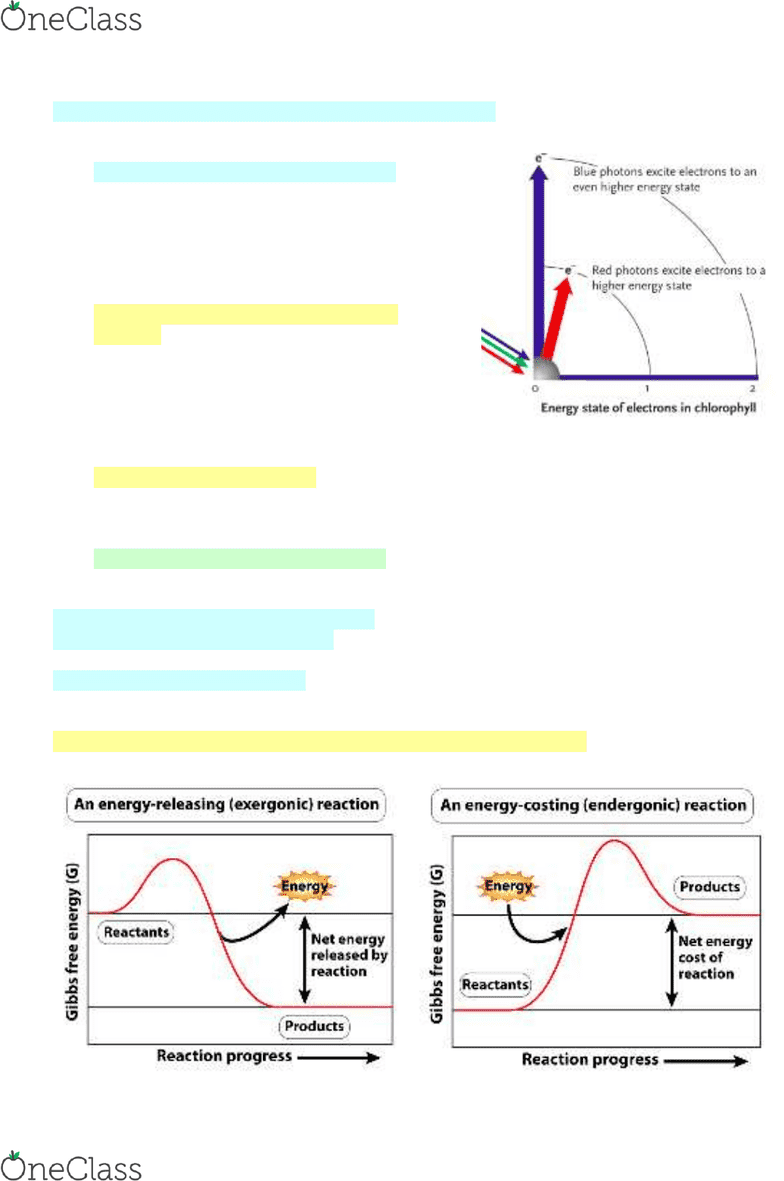 Absorption of Light by Chlorophyll
Delocalization- Shared between two or more atoms in a molecule
 Electrons get excited and jump from their ground state to their excited state which is at a higher energy
level
 Ground state is the resting state of electrons
 Electrons must have certain amount of energy
 When electrons release energy, they release
colour
 Absorb photons of light= amount of energy that
matches energy that is needed between ground
state and the energy level
 Chlorophyll degrades much faster than other
pigments, which explains the changes of colours
in plants during fall and winter
Producers
They use photosynthesis to create any organic molecule that
is made of carbon and hydrogens from CO2. This would include sugars, fatty acids, cellulose.
 Primary way of capturing energy however, plants are able to synthesize energy through cellular respiration
 CO2+ H2O+energy---> C6H12O6+O2
Organisms
Typically you can only be one of each, but there are some exceptions.
 Sea slug- its primary source of food is algae. These organisms are then incorporated into the sea slugs
system to function as a chloroplast and aid in the production of energy through photosynthesis for its
metabolic processes.
Producers- Energy is stored between C-H bonds
Consumers- Cellular respiration (Animals), they eat to get energy and they extract energy to power metabolic
processes
Decomposers- Eat stuff that are dead
Metabolism
It is the sum of all chemical reactions (breaking and forming of covalent bonds)
 Reactions are coupled in metabolic processes
find more resources at oneclass.com
find more resources at oneclass.com
Unlock document