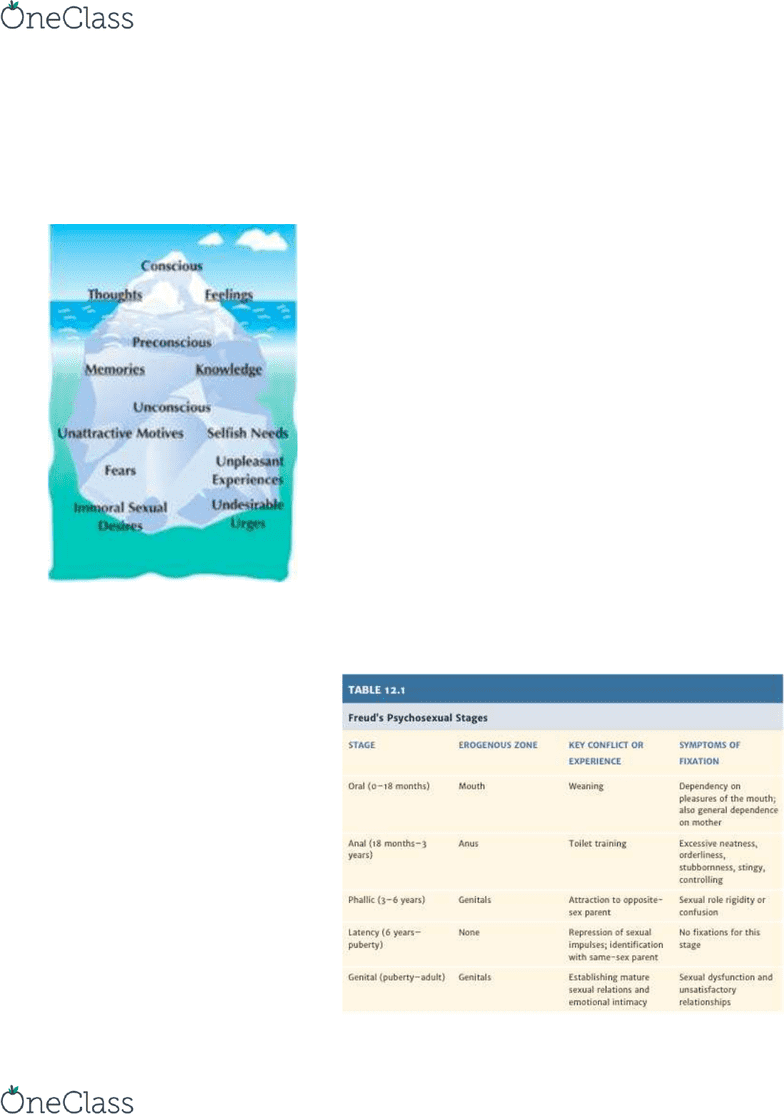 Chapter 12- Personality
Personality refers to the unique characteristics that account for our enduring patterns of inner experience and outwards
behaviour.
12.1- The Psychodynamic Perspective
The psychodynamic model emphasized the unconscious, often dark desires that have to be held in check.
 In Freud's view, the personality forms because of struggles between primal needs and social or moral restraints
The Structure of Personality
1. The topmost level is conscious mind, composed of the thoughts and
feelings that we are aware of at any given moment
2. The second level, just below the surface, is the preconscious, which
contains thoughts, memories, and ideas that can be easily brought into the
conscious mind if attended to.
3. The deepest level, the unconscious, contains most of the content of our
minds. We are unaware of this content and cannot become aware of except
under special circumstances. The unconscious is particularly important to the
development of personality.
 Id- Present at birth and represents basic instinctual needs and desires, such
as those related to eating, sleeping, sex and comfort
o Impulses governed by the pleasure principle (constantly strive for
gratification)
o Libido (sexual overtones and sexual energy), fuels the id (usually
considered immature and childlike)
 Ego- Develops as a result of this learning and works under the reality
principle (not always possible or acceptable to have all wants and desires
met)
o Assesses what is realistically possible and what the social consequences of
gratification might be, and is the rational problem solving force that prevents
id impulses from bursting
 Superego- In charge of determining which impulses are acceptable to express openly and which are unacceptable
o Internalize the values and norms embodied in those behaviours and begin to evaluate ourselves with to
them
o Resides in both the conscious and unconscious mind
Freud's Psychosexual Stages
 Believed that the id, ego, superego
work with and against one another
(Sexuality and aggression are the two
most influential)
o They are the most likely to
cause internal conflict because
they are the ones that most often
fall under social and moral
constraints and are most likely
to be left unsatisfied
 Penis Envy (Girl focuses on her lack of
a penis) vs a boy in the phallic stage
focuses on his penis
 Oedipus complex- Castration anxiety (
Son fears that his father will punish
him for his feelings, by cutting off his
source of sexual function it will stop it)
 Neuroses- Freud's term for abnormal
behaviour patterns characterized by
anxiety, depression and other such
symptoms
find more resources at oneclass.com
find more resources at oneclass.com
Unlock document

Anxiety and Defence Mechanisms
 Internal psychological conflict, results in anxiety- Defence mechanisms which are unconscious tactics employed
by the ego to protect the individual from anxiety
 Repression- Is the most basic defence mechanism which keeps unpleasant memories or thoughts buried deep
within our unconscious minds, protecting is from the difficult and painful process of facing them (denial)
Alfred Adler
 Believed that social needs and conscious thoughts are more important to human behaviour than sexual needs and
other unconscious motivations
o How do feelings of inferiority motivate behaviour- childhood experiences of helplessness
Carl Jung (agreed with Freud's idea of unconscious)
Driven toward joy, creativity, and internal harmony
 Collective unconscious- Is not a private entity rather is a cumulative storehouse of inherited memories shared by
all humankind (archetypes- reflected in symbols and images that appear in art, literature, religions)
 Personal Unconscious- formed by individual experiences
Karen Horney
 Agreed with Freud about the anxiety-provoking experiences in childhood can lead to lasting psychological
problems, but more interested in the basic anxiety which develops in children who experience extreme feelings
of isolation and helplessness (sets the stage for later neuroses)
12.2- The Humanistic Perspective
Emphasized people's potential and highlight each person's consciousness, free will, and other special human qualities
Abraham Maslow
 Believed that humans are basically good and that we have the urge to grow and fulfill our potential
 Arranged in hierarchically, beginning with the need for basic physiological necessities, such as food and shelter,
and becoming increasingly complex
o Self-actualization- the need to fulfill our full and special potential as human beings
 More could be learned from individuals who were healthy and well-adjusted than from those who were
experiencing psychological problems
 Mihaly Csikszentmihalyi- studied peak experiences (moments in which people experience intense clarity of
perception, feelings of joy and excitement, and a suspended sense of time and reality) and took upon ideas from
Maslow
Carl Rogers
 Believed that human nature is fundamentally positive and people strive for self- actualization, however based his
theory of personality around the concept of the self rather than around a hierarchy of needs.
o Self-concept is a pattern of perception that remains consistent over time and can be used to characterize an
individual
o As children we need unconditional positive regard vs Conditions of worth
12.3- The Trait Perspective
Trait Theorists make several assumptions:
1. People have innate tendencies to respond to situations in certain ways (traits)
2. These tendencies can be linked together to form broad habits (central traits)
3. Such principles can be used to form the foundation of a scientifically testable theory
Gordon Allport
 Did not believe that behaviour is necessarily related to unconscious tensions; rather, he argued that our behaviour
can be quite healthy and organized
 Emphasized the unity and uniqueness of the individual, and he believed that the present is more important than
the past in understanding personality
Hans Eysenck and Factor Analysis
 Strong proponent of using reliable statistical measures to test psychological principles (scientifically testable)
o Strove to develop adequate measures of personality traits and, measures of their biological foundations
 Superfactors- A fundamental dimension of personality made up of a related cluster of personality traits
find more resources at oneclass.com
find more resources at oneclass.com
Unlock document 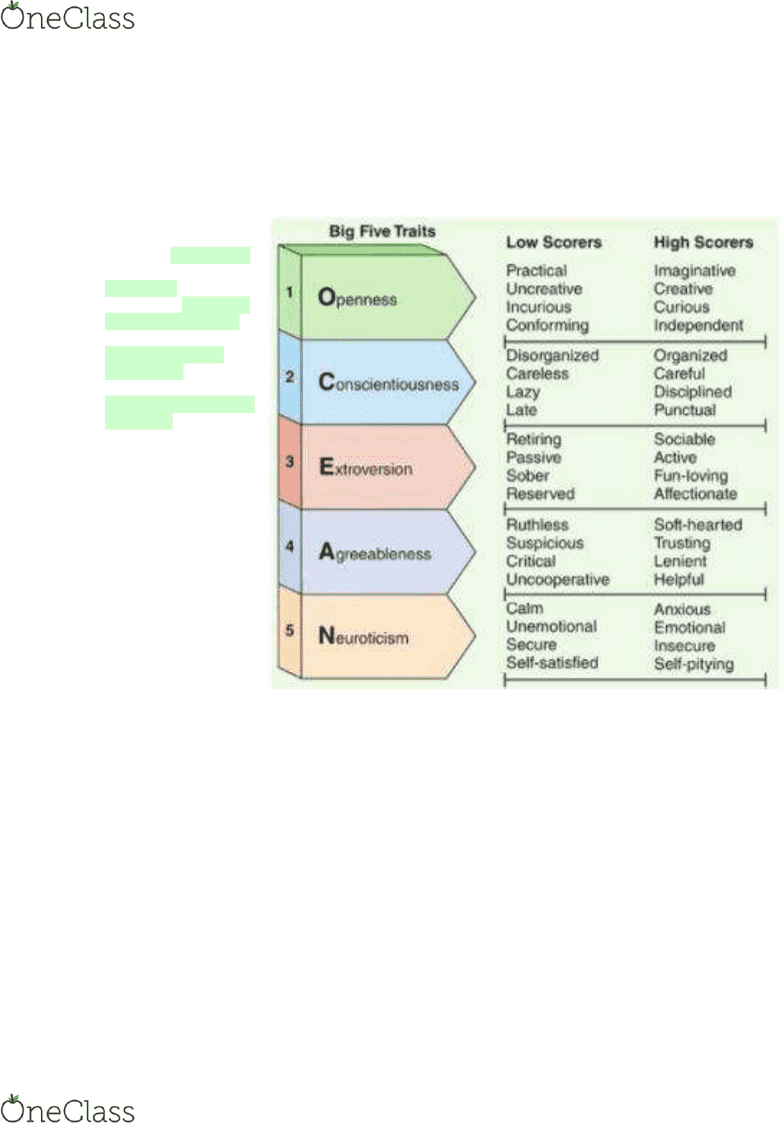 o Extroversion- the degree to which a person is outgoing and enjoys interacting with others. Personality
traits include impulsiveness, sociability, and assertiveness
o Introvert- Displays traits such as thoughtfulness, reliability, and passivity
o Neuroticism- The degree to which a person tends to experience negative emotions, also known as mental
instability
o Psychoticism- The degree to which a person is vulnerable to developing the serious disorders known as
psychoses, in which contact with reality
 Eysenck Personality Questionnaire- believed that personality traits were biologically based
The Five- Factor Model
 Identifies five major trait
categories, agreeableness
vs disagreeableness,
extroversion vs
introversion, neuroticism
or emotional instability
vs stability,
conscientiousness or
dependability vs
irresponsibility and
openness to experience or
imaginative vs
unimaginativeness
12.4- The Situationist and
Interactionist Perspectives
The Situationist Perspective
 Situationism- The notion
that behaviour is
governed primarily by
the variables in each
situation rather than by
internal traits
o What we call
personality,
skinner saw as
simply a certain
consistency in what he called response tendencies
o We tend ti favour or repeat responses that have previously helped us gain a desired presence in college or
university as some combination of intelligence, conscientiousness, and perhaps a little neuroticism
The Interactionist Perspective
 Interactionism- Focuses on interactions between people and situations, people influence the situations they
encounter
o Choices that are self- fulfilling prophecies
 Bandura is famous for introducing the concepts of modelling and self-efficacy to the study of human behaviour
and personality
 Self-efficacy refers to people's personal beliefs about their ability to achieve the goals they pursue
 Disposition- Situation consistency
12.5-Personality Assessment
Personality Inventories
 Are questionnaires that require individuals to respond to a series of true- false or agree- disagree statements
designed to measure various aspects of personality (self-report inventories because they depend on info that
respondents supply about themselves)
o Minnesota Multiphasic Personality Inventory 2 (MMPI-2)- used to assess abnormal personality
characteristics and inclinations (believed to reveal thoughts, emotions, and attitudes)
find more resources at oneclass.com
find more resources at oneclass.com
Unlock document