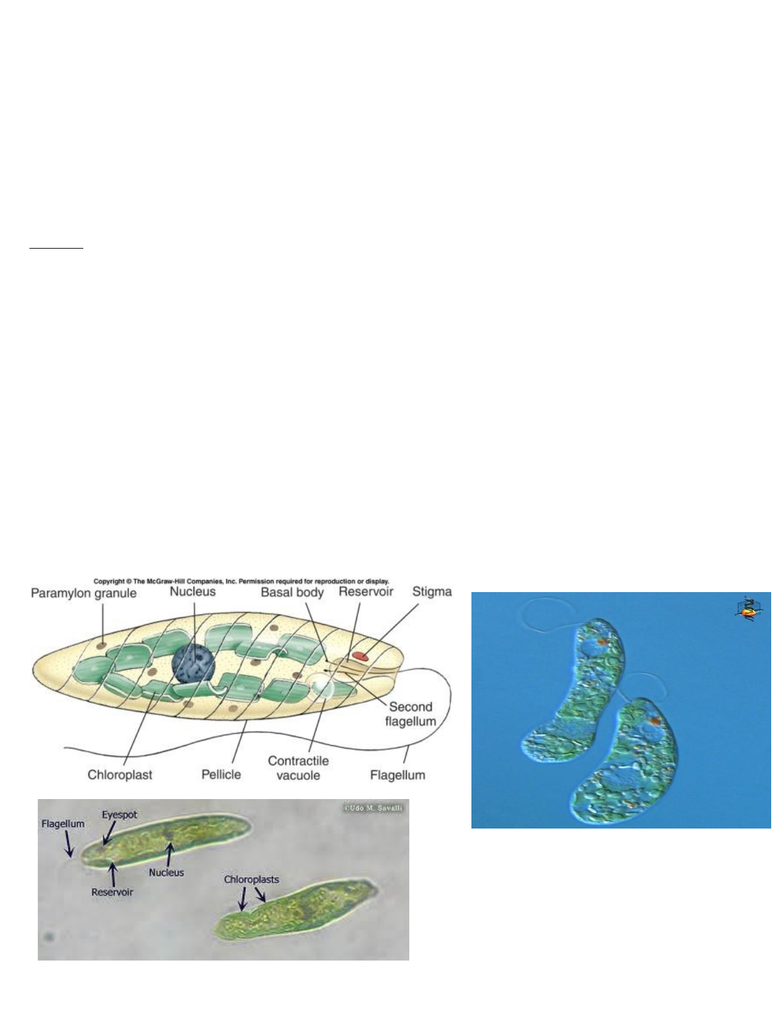 Lab 1: Kingdom Protista
Taxanomic characteristics
 Protista kindgdom is paraphyletic (A group of taxa is said to be paraphyletic if the group contains its last
common ancestor but does not contain all the descendants of that ancestor)
 Protists are heterotrophic and motile
 all life process is within the single cell
 digestion takes place in food vacuole
 water regulation is through contractile vacuole
 reproduction is though binary fission
 classified through locomotion (cilia, flagella, amoeboid)
Euglena (Free living Protozoa)
Phylum: Euglenozoa
Subphylum: Euglendia; have chloroplasts with chlorophyll b
Class Euglenoidea: some are found to have a light-sensitive stigma or eyespot which allows light only from
one direction to strike a light sensitive receptor.
Order: Euglenales
Genus: Euglena
-Euglena is a plant-like flagellate and may contain chloroplast
-freshwater flagellate
-Spindle-shaped body that moves by means of a single anteriorly projected flagellum and a second very short
flagellum also has a function in locomotion
-worm like and expansion of the body is known as “euglenoid movement”
-stigma: found at the base of the flagellum, it’s a photoreceptive pigment or eyespot
-contractile vacuole(used for osmoregulation) found posterior to the reservoir (flagellum arises from a
clear pear-shaped area)
-Cytopharynx is used for ingestion of preys
-most obvious structure are the chloroplasts, the shape and arrangement of the chloroplasts are used to
determine the species of Euglena
Unlock document 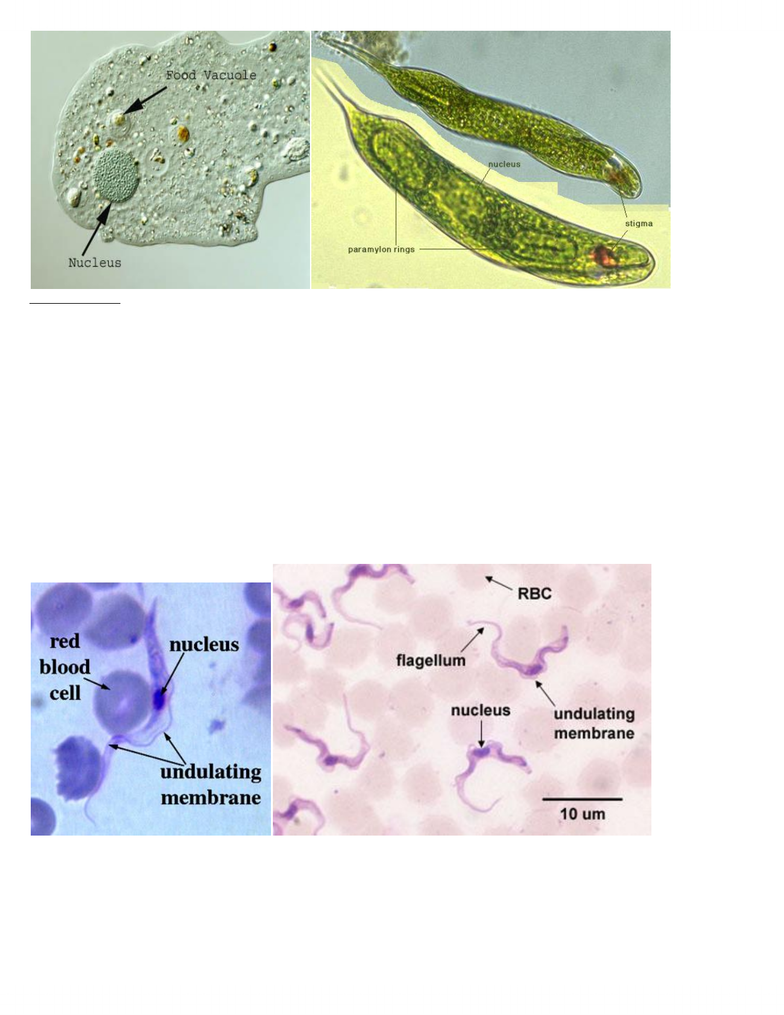 Trypanosoma
Phylum: Euglenozoa
Subphylum Kinetoplasta: all parasitic in animals and plants; have a unique organelle the kinetoplast which
is part their mitochondrion and is composed of a large disk of DNA
Class Trypanosomatidea
Gensus: Trypanosoma
-all are parasitic in blood of man and vertebrates
-Typanosoma gambiense: agent of African sleeping sickness, transmitted by tsete flies.
-the undulating membrane is made of a row of cilia that form a sheet and beat in synchrony
Identify:
 Nucleus
 Undulating membrane
 Flagellum
Unlock document 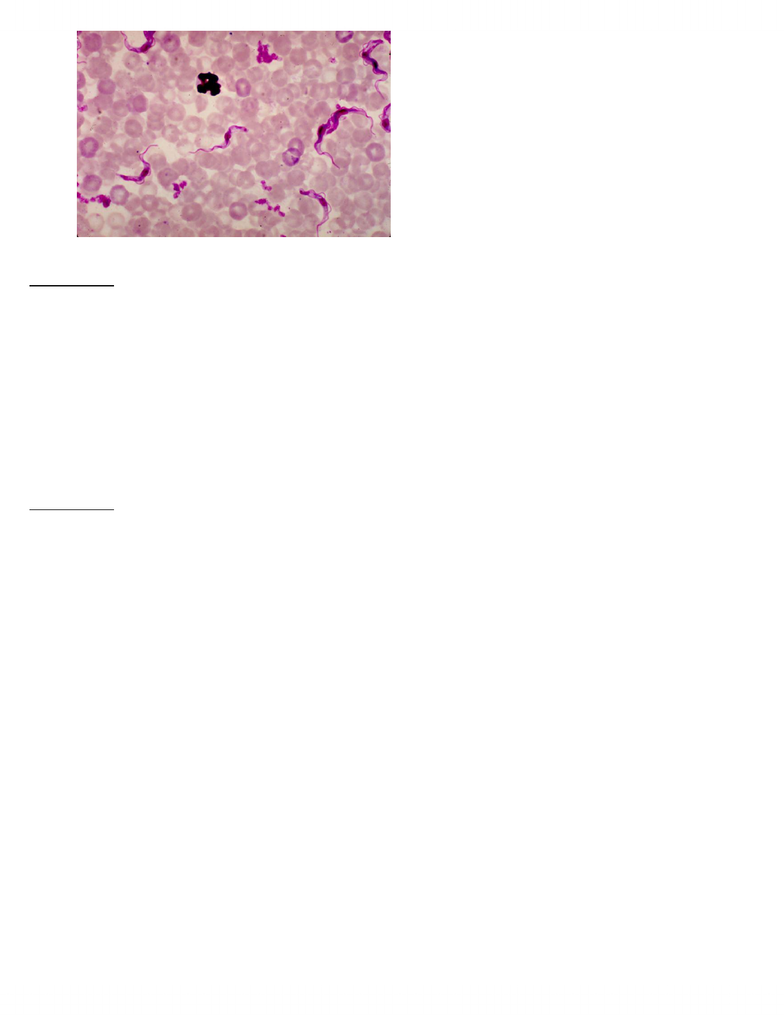 Plasmodium
Phylum Apicomplexa: all are endoparastites and hosts are found in many animals
Class: Coccide(infects both vertebrates and invertebrates)
Order: Eucoccidia
Genus: Plasmodium
-causes malaria
-involes two hosts, humans and anopheline mosquitoes
-infection occurs through the injection of Plasmodium sporozoites in the saliva of a mosquito into a human
capillary
-sporozoites are then carried in the blood to the liver and for cryptozoites
-after replication merozoites are relased and enter bloodstream
Paramecium
Phylum Ciliophora: possess cilia, two nuclei: macronucleus and micronucleus
Class: Oligohymenophorea
Order: Peniculida
Genus: Paramecium
-cytopharynx: at the base of which the food vacuoles form
-discharge of trichocysts: small bodies in the ectoplasm that expel a long thread-like structure when
simulated (defensive function)
Identify:
 Peristome (oral groove)
 Cytostome (mouth)
 Cytopharynx
 Food vacuoles
 Contractile vacuoles
 Cillia
 Macronucleus
Unlock document