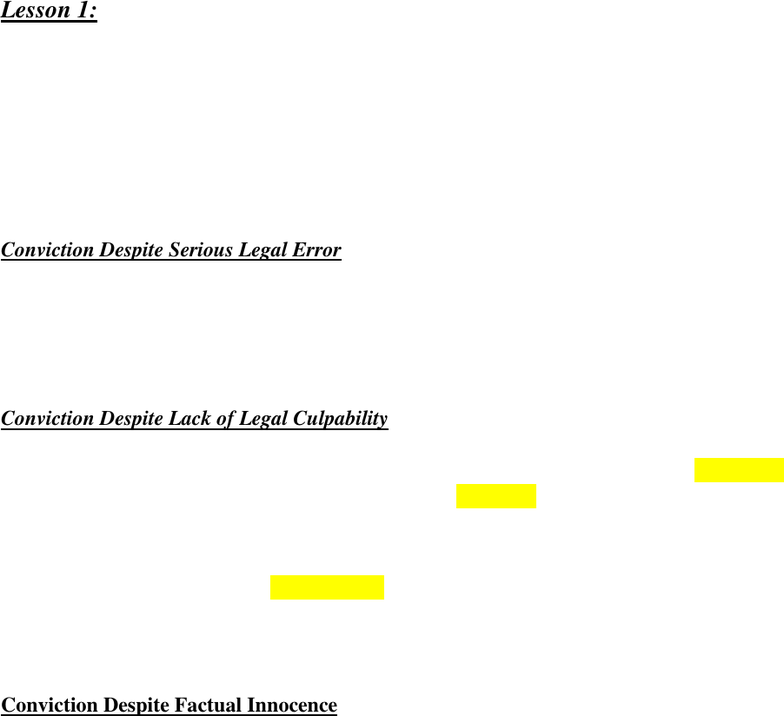 Lesson 1:
Legal scholars, particularly Michael Risinger (2007), have identified three broad categories of
wrongful conviction:
1. Conviction Despite Serious Legal Error
2. Conviction Despite Lack of Legal Culpability
3. Conviction Despite Factual Innocence
Conviction Despite Serious Legal Error
Even if someone committed the illegal act and was legally culpable, a wrongful conviction
might still result if serious errors occurred in the judicial process. Other examples might include
entering evidence gathered in an unconstitutional way, inadequate legal defense, or problematic
arguments during closing statements (e.g., telling a jury that if they do not render a certain
verdict they might go to hell...yes, a prosecutor really did that).
Conviction Despite Lack of Legal Culpability
The second broad category of wrongful convictions also involves the convicted party committing
the illegal act. Convictions require establishing both a criminal act took place (i.e., actus reus)
and legal culpability or responsibility for that act (i.e., mens rea). Sometimes someone can
commit a potentially illegal act (e.g., homicide) without being legally culpable (e.g., the person is
insane; the homicide was in self-defense).
You might have heard the word technicalities used at some point, most likely in a negative
connotation. This is not a legal term but is a word that some use when describing a person who
committed a criminal act but are not held responsible for that act.
Conviction Despite Factual Innocence
Although those who are convicted despite serious legal error(s) or despite legal culpability are
generally classified as wrongfully convicted, in this class we are going to focus upon those who
were convicted despite factual innocence. According to Risinger (2007), factual innocence
occurs if one of two conditions exists. An individual is factually innocent of a crime if:
1. No crime took place. Without a crime, there is no offender
2. A crime took place but the (factually innocent) person did not commit that crime.
The national Innocence Project is a non-profit legal clinic created in 1992 by Barry C. Sheck and
Peter J. Neufield. Using DNA testing, the Innocence Project works to exonerate individuals who
have been wrongfully convicted.
The National Registry of Exonerations has compiled information on every known exoneration in
the United States since 1989. While the registry includes Innocence Project exonerations, it is
Unlock document 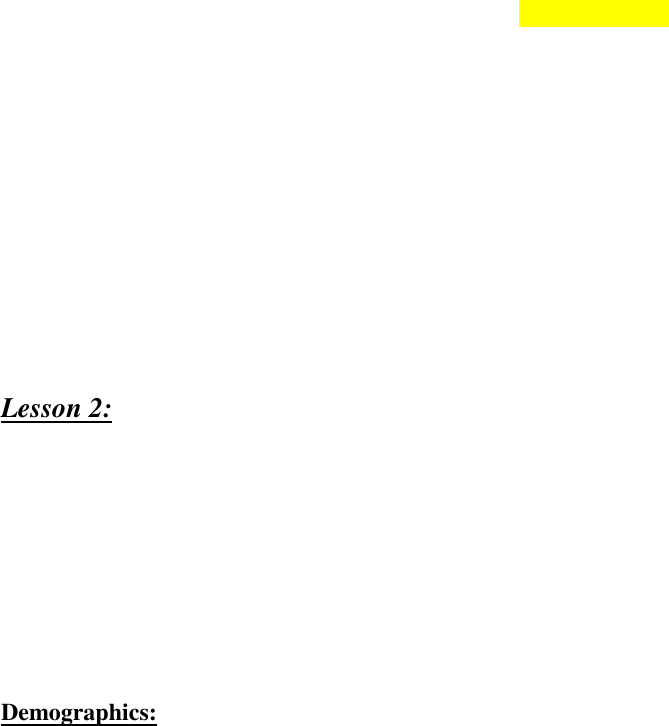 also a resource for non-DNA exonerations and those exonerations that occurred without direct
involvement of the Innocence Project.
In 1923, United States judge and judicial philosopher Learned Hand wrote, “Our procedure has
always been haunted by the ghost of the innocent man convicted. It is an unreal dream.”
Most (94%) of Americans believe that wrongful convictions have occurred in homicide cases
and that 13% of all homicide convictions are of someone who is innocent. In a study of attitudes
of the general public in Michigan, Zalman, Larson, and Smith (2012) found that only two of over
700 respondents reported the wrongful convictions “never” occur. The majority (55.1%) stated
that they occur occasionally with smaller groups stating that they occur very rarely (24.8%) or
frequently (20.1%). A much larger group of non-White respondents (42.3%) reported that
wrongful convictions occur frequently than did White respondents (16%) (Zalman et al., 2012).
Lesson 2:
Again, relying on the definition provided by the National Registry of Exonerations, one of the
following must occur for one to be exonerated
1) the individual must be “declared to be factually innocent by a government official or agency
with the authority to make that declaration;” or
2) “relieved of all the consequences of the criminal conviction by a government official or body
with the authority to take that action.”
Demographics:
Gender:
According to data from the National Registry of Exonerations, males comprise the vast majority
of those exonerated in the United States. While women account for 17% of felony convictions in
the United States, they only account for 9% of exonerations.
Age:
The average age of the exonerated is 27 years according to Innocence Project data. Individuals as
young as eleven years of age have been wrongfully convicted, with almost ten percent of
exonerated individuals being younger than 18 when convicted.
Race:
Unlock document

Already have an account? Log in
Defendants of all races and ethnicities are at risk of wrongful conviction, but those who are
Black appear to be at the greatest risk. Blacks make up approximately 47% of those listed in
the National Record of Exonerations, but, as a whole, the group makes up an even larger
portion of those exonerated through DNA evidence. Among the first 312 individuals in the
United States who were exonerated through DNA evidence, 194 are Black. Blacks exonerees out
number White exonerees by more than 2:1.
To provide further context, consider the demographics of the United States. Only 13.1% of
Americans identify themselves as Black, yet over 60% of those exonerated through DNA are
Black. Perhaps a better comparison would be to consider the rate of those convicted. Thirty-eight
percent (38%) of those convicted of felonies in the United States are Black, meaning that Blacks
are still exonerated (and likely wrongfully convicted) at a much higher rate than one would
expect.
In our interview with Dr. Jeff Ulmer (Introductory Lesson B) he discussed racial disparities in
the criminal justice system. He made two key points: 1) racial disparities clearly exist in the
criminal justice system, and 2) this does not mean that those in the system are outwardly racist
but instead demonstrates a general trend with several potential causal factors. Nonetheless, race
and racism can influence outcomes in the system.
On average, known exonerees spend almost 9 years in prison; however, some spend
significantly more time in prison. Seventy percent (70%) of those exonerated by DNA evidence
spent at least five years in prison.
Conviction type:
In 2006, 94% of felony offenders who were sentenced pleaded guilty prior to sentencing. These
data do not reflect the trends seen among the wrongfully convicted. In fact, the trends among the
wrongfully convicted are a dramatic departure from the way the average conviction is obtained.
Rather than guilty pleas, 81% of the wrongfully convicted were found guilty after a jury trial
(most common) or a bench trial. This, however, means that even the factually innocent
sometimes plead guilty. Approximately 19% percent of known exonerees pleaded guilty to
charges surrounding crimes they did not commit. Notably, exonerees who pleaded guilty
spent significantly less time in prison (3.3 years) than did exonerees who went to trial (10
years), demonstrating the benefit of a guilty plea in spite of innocence.
Crime type:
The exonerated are wrongfully convicted of serious crimes at an alarming rate. Fewer than 1% of
felony convictions in the United States are homicide convictions, yet nearly 40% of known
exonerees were convicted of homicide. Of the first 2,145 known exonerations since 1989,
homicide (39%), sexual assault (14%), and child sexual abuse (12%) convictions made
approximately 65% of all known wrongful convictions. Drug crimes also comprised 12% of
Unlock document