by OC2540294
School
University of California - Irvine
Department
Biological Sciences
Course Code
BIO SCI 93
Professor
All
Study Guide
Final
This preview shows pages 1-2. to view the full 8 pages of the document.
Lecture A Version A
Final Exam KEY
Bio 93 Fall 2010
There are 33 multiple choice questions. There is one best answer for each question. Question 1 is
worth 0 points. Questions 2 - 34 are worth 2 points each for a total of 66 points.
1. You have version A. Please bubble in “A” for question 1. (0 points)
2. Mitosis, in contrast to Meiosis:
a. produces gametes
b. requires pairing of replicated homologous chromosomes
c. occurs in somatic cells
d. has crossing over before Anaphase
e. results in haploid cells
Level 2 Comprehension. Lectures 15 and 16. Mitosis is the form of cell division used by all somatic cells where one
cell divides to produce two identical cells. Meiosis is a specialized form of cell division that produces only gametes.
Mitosis does not involve pairing of chromosomes or crossing over, this occurs only in meiosis. Meiosis produces
haploid gametes, not mitosis.
3. At the end of Meiosis I,
a. homologous chromosomes are paired
b. sister chromatids are separated
c. daughter cells are still diploid
d. a second round of DNA replication is required
e. the chromosome number per cell is 1n
Level 2 Comprehension. Lecture 16. Many students do not recognize that the first division in meiosis is the division
that reduces ploidy. During meiosis I the homologous replicated chromosomes, one originally from the mother and
one from the father, pair and line up on the metaphase plate. The homologs separate during anaphase I (sister
chromatids stay attached). So at the end of division I, each cell has one of the two original homologous chromosomes.
Since these came originally from mother or father, not both, these cells are now considered haploid (1n in diploid
organisms). These two cells each divide again, separating the sister chromatids, to form the gametes which are also
considered haploid since these still containonly one copy of each chromosome.
4. Kleinfelter syndrome is a human genetic disorder that results when an individual has two X chromosomes as well
as a Y (an XXY genotype), but the rest of the chromosomes are normal. This sex-chromosome trisomy is most likely
a result of:
a. Nondisjunction during anaphase I or II in the germ cells
b. Polyspermy
c. Failure of cytokinesis I or II
d. Double duplication of the X chromosome during the second S phase
e. Incorrect separation of chromosomes during prophase I or II
Level 3 Application. Lecture 19 discusses possible mutations like aneuploidy. In a case like XXY, an extra
chromosome is present, but not an entire extra set of chromosomes. Therefore polyspermy or cytokinesis failure are
not possible answers. There is no second S phase, and chromosomes do not separate in prophase. 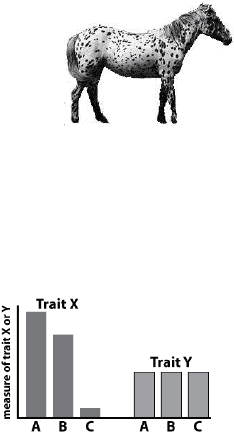 5. A homozygous dominant (AABB) animal was crossed with a homozygous recessive (aabb), and then the progeny
were crossed again. If the two traits assort DEPENDENTLY (not independently), and assuming complete dominance,
the ratio of phenotypes of the F2 generation would be
a. 2 : 4
b. 1 : 2 : 3 : 4
c. 3 : 1
d. 9 : 3 : 3 : 1
e. 1 : 2 : 1
Level 3 Application. Lecture 17. You learned that alleles for one gene assort independently from alleles for another
gene if they are on different chromosomes. If they sorted dependently, then the ratio of the two traits would be the
same as the ratio of one trait. All the F1 progeny would be AaBb. The F2 progeny would have the genotypes of 1
AABB, 2AaBb, and 1 aabb. The phenotypes would be 3 dominant to one recessive. (See figure 14.8 in your book)
6. Cystic fibrosis is an inherited autosomal recessive disorder. A mother and father already have one child with the
disease. What is the probability that their second child will also have cystic fibrosis?
a. 0%
b. 25%
c. 50%
d. 75%
e. 100%
Level 2 Comprehension. Lecture 17. In order for two parents to have a child with a recessive disease, they must both
be carriers. As heterozygotes, there is a one in four chance of both parents giving a child the CF gene causing the
disease.
7. When a grey horse (GG) and a white horse (WW) are crossed, all progeny look like the horse shown on the right,
with both white and grey hair. This is most likely an example of
a. epistasis
b. the effect of Barr bodies
c. pleiotropy
d. incomplete dominance
e. codominance
Level 3 Application. Lecture 18. There are many examples of non-Mendelian dominance. If an organism has two
alleles that both produce a phenotype, as seen in this horse coat color example, it is called co-dominance. It cannot be
Barr bodies, similar to the mottled effect on pigment in cat fur, as that would only be seen in female horses.
Incomplete dominance would result in an intermediate color.
8. Traits X and Y were measured in identical triplets (A, B and C) as part of a genetic study. Based on the results
below, the variation in trait X is most likely due to
a. epistasis
b. co-dominance
c. incomplete dominance
d. environmental factors
e. autosomal dominance
Level 4 Analysis. Lecture 18. Identical triplets would have the same alleles for traits X
and Y. Since Trait X still varies, another effect must be changing the phenotype. None of the other options given
would affect the same genotype in different ways except environmental factors.
9. Female tortoise shell cats are mottled with patches of orange and black fur. On rare occasions, a male tortoise shell
cat is born. How is this possible?
a. The mother carried the same allele for color on both X chromosomes
b. The father carried a rare color allele on his Y chromosome
c. The tortoise shell male is XXY
d. It's an example of an autosomal dominant trait

e. The tortoise shell male inherited a Barr body from the father
Level 3 Application. Lecture 19. You learned in class that fur color in cats, is regulated by a gene on the X
chromosome. Tortoise shell orange and black cats are usually females because Barr bodies in each cell shut down one
or the other chromosome. For a cat to be both male and have Barr bodies (2 X chromosomes), he must be an XXY
due to nondisjuntion.
10. In Drosophila, researchers have measured the following recombination frequencies between pairs of genes:
y (yellow) - rb (ruby body) = 7.5%
rb - cv (crossveinless) = 6.2%
y - cv = 13.2%
Why isn't the recombination frequency between y and cv 13.7%?
a. multiple crossing over events
b. the genes are very close together
c. law of independent assortment
d. the presence of rb between the y and cv reduces recombination
e. chromosomal errors during meiosis such as non-disjunction
Level 2 Comprehension. Lecture 19. We discussed recombination frequency in Lecture 19. Often the frequencies do
not add up exactly, because multiple crossing over events can reduce the perceived frequencies of crossing over.
11. A critical aspect of the Hershey Chase experiment showing that DNA carries genetic information was
incorporation of radioactive
a. phosphorus into viral DNA
b. viral DNA into bacterial DNA
c. sulfur into bacterial proteins
d. bacterial proteins into viruses
e. phosphorus into viral proteins
Level 2 Comprehension. Lecture 20. The Hershey Chase (blender) experiment from was two parts – labeling viral
DNA and viral protein – to see which was transferred when bacteria were infected. You needed to remember that
phosphorus is more commonly found in DNA than protein, and sulfur was more commonly found in protein than
bacteria. The only answer that is correct is radioactive phosphorus being added to viral DNA.
12. In the vegetative cycle, yeast cells replicate their DNA through mitosis and divide to give rise to two daughter
cells. If a yeast cell was isolated and allowed to divide once in the presence of radioactive thymidine,
a. only one of the daughter yeast would have radioactive DNA
b. yeast RNA would be radioactive
c. DNA replication would be arrested
d. yeast proteins would be radioactive
e. DNA in both daughter yeast would be radioactive
Level 3 Application. Lecture 20. DNA is replicated semi-conservatively so each daughter cell would have one strand
of the double helix that is original, and one that is a copy containing radioactive thymidine. The thymidine would not
be added to the yeast’s RNA or proteins.
13. The anticodon tRNA complex carrying the amino acid Tryptophan is 3' - ACC - 5'. The original template strand of
DNA was
a. 3' - UGG - 5'
b. 5' - TGG - 3'
c. 3' - ACC - 5'
d. 5' - ACC - 3'
e. 5' - GGT - 3'
Level 3 Application. Lecture 21. The anticodon of tRNA, read 3’ to 5’, is ACC. It is bound to mRNA, 5’ to 3’,
UGG. The mRNA is made from DNA, read 3’ to 5’, ACC.

There is one best answer for each question. Questions 2 - 34 are worth 2 points each for a total of 66 points: you have version a. Please bubble in a for question 1. (0 points: mitosis, in contrast to meiosis, produces gametes, requires pairing of replicated homologous chromosomes, occurs in somatic cells, has crossing over before anaphase, results in haploid cells. Mitosis is the form of cell division used by all somatic cells where one cell divides to produce two identical cells. Meiosis is a specialized form of cell division that produces only gametes. Mitosis does not involve pairing of chromosomes or crossing over, this occurs only in meiosis. Many students do not recognize that the first division in meiosis is the division that reduces ploidy. During meiosis i the homologous replicated chromosomes, one originally from the mother and one from the father, pair and line up on the metaphase plate.