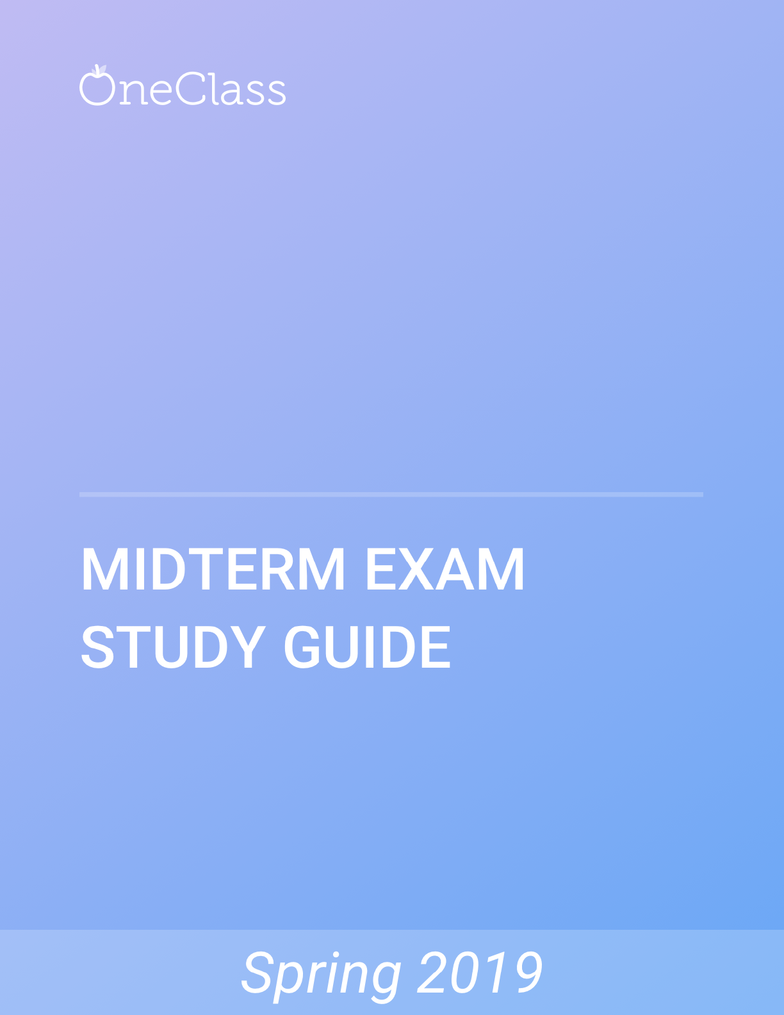 Environmental Law Notes
4 Parts of Environmental Law: Approaches, Tools, Tool Users, Techniques
Main Sectors of Environmental Agencies:
EPA - Federal
DEEP (Department of Energy and Environmental Protection) - CT
Dep. of Environmental Conservation
Dep. of Environmental Control - State Level Agencies
Dep. of Environmental Management
(Word used in agency show a differentiation in priority)
Conserve: Live and work with, Protection & Control: Militant and non-interactive
Before 1900’s law school was an ALTERNATIVE to college.
• You would get an “LLP” (Bachelor's equivalent), “LLM” (Master eq.), “LLD” (Doctor eq.)
• Starting in 1930’s, you had to get a bachelor’s degree and then go to law school
American Law almost entirely derived from English law, and started without formal “Law-making”
Common Law: Law created by judges through court case rulings.
Common Law of Nuisance: Use of your property in a way where it interferes with the rights of others
using their property. Common law of Nuisance was the first tool people used to deal with Environmental
cases and issues.
Example:
Connecticut was receiving pollution from Ohio after The Clean Air Act was passed. CAA did not have any
guidelines on the issue, so Connecticut sued using common law. Judge ruled that if it were something
that the creators and writers of the clean air act did not cover, that it was on purpose. The motion was
DENIED. No more common law for environmentalism where there are currently legislative guidelines
(No arguing common law for air and water, CAA & CWA).
Common law of Nuisance was used by Connecticut against Ohio. This ruling means that we must now
go through written laws instead of common laws going forward for these types of issues.
RTK - Right to know: Law that people near hazardous materials and chemicals need to know that it is
there.
History of Law in the United States
American law is taken almost entirely from English Law. Now English law differs entirely from ours. In
America, you are innocent until proven guilty, and the government has to prove you are guilty. In other
countries, you are found guilty and you must prove your innocence.
• If you do not like laws being made, you can elect new people to write the laws.
A “Patent” or “Charter” was issued by the king of England that allows the authority to govern lands on
the king’s behalf. A Royal Charter established Connecticut, and each other colony by written grants of
King James.
find more resources at oneclass.com
find more resources at oneclass.com

Environmental Law Notes
Timeline of the United States Law
1066 - William of Normandy invaded England in the Battle of Hastings. Took over with complete and absolute
power.
1215 - Magna Carta: Made laws more people-oriented. Nobles protesting the absolute powers of imposing tax
by the king, and with the Magna Carta, the king was unable to impose taxes without first consulting the
noblemen.
Late 1500s - Early 1600’s - Parliament started to form.
The king owned all of the land and rivers in all land under his rule. Colonization growing, and when the
colonists step foot on new land, it is immediately owned by the king.
1620 - Puritans on the Mayflower designed the Mayflower Compact
The first law made by settlers, set up a self-government away from rule of king. Pilgrims didn’t want
someone ruling without being there. On day-to-day stuff, they decide on issues for themselves. King
acknowledged as the “boss”. Power does not go king - down, but from the people - up.
1639 - “The Fundamental Orders of Connecticut”
Things have changed since the Mayflower Compact. Thomas Hooker took a lot of people from Plymouth
Colony, led them out of Massachusetts to Connecticut for religious freedom and governing rights. Not a
separate colony yet - still considered Mass. They got together and set up a new form of government,
called The Fundamental Orders of Connecticut. They chose qualified people to govern without approval
of the king. Established: All power rests with the people, delegates some power to qualified governing
people. Major break with absolute power.
1662 - King James II granted Connecticut a charter, establishing it as its own state.
1689 - Glorious Revolution (In England).
Religious strife caused King James II to leave (overthrown). William III and Mary (Mary is King James’s
Daughter) were allowed to be king of England if they agreed that Parliament was the supreme
lawmaking body (People were able to vote on who was in Parliament. They agreed, but this
arrangement was vague on who made what laws, and how governing American colonies would work.
1770’s - England was fighting French Indian war, England needed lots of money. They put their burden on the
American Colonies. “We can only give you taxes if parliament decides to give it to you, king.”. Taxation
without representation, and we were not pleased.
1776 - Declaration of Independence - Did not grant rights other than to self-government.
Did not change from “United Colonies” to “United States” until later that year. Laid framework for the
constitution.
1781 - Articles of Confederation (Of Perpetual Union) established.
First written constitution. Very weak, no central government. States retained most power.
1783 - Now fully independent, free and sovereign.
1787 - Everyone agreed Articles of Confederation were not working.
May through September of that year, the Constitutional Convention occurred. The draft of the
constitution needed to have a majority vote to be put into effect, and when 9/13 states had approved it,
it was put into effect (1788). Set up doctrine of separation of powers. A tension of power was the goal
as a mean of restricting and limiting exercise of power. A president – not elected directly by people so all
states have equal say. Legislative – makes laws. Judicial – interpret the law.
1788 - George Washington unanimously elected president of the United States.
“O Tempora, O Mores” - Cicero (Oh the times, of the morals). Customs of various historical periods are
so incomparably different than they are to ours in modern day. Apples & oranges.
find more resources at oneclass.com
find more resources at oneclass.com 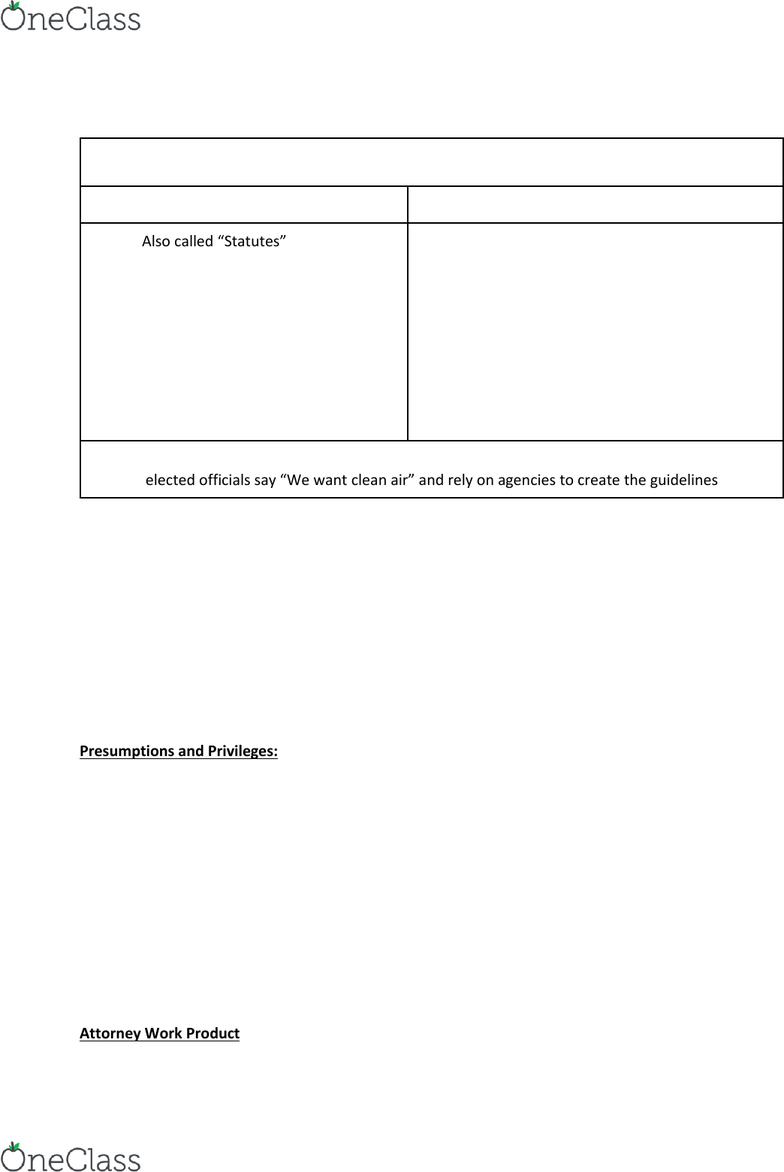 Environmental Law Notes
Laws v. Regulations
LAWS
REGULATIONS
• Also called “Statutes”
• Created & drafted by elected officials
• Signed into effect by elected officials
• “Top of the heap” w/ enforcement
• If you do not like new laws being
passed, you can vote in new officials
Laws passed end up in the United States Code
(CT: Connecticut General Statutes)
• NOT made or signed by elected officials, but
bureaucrats
• Same force and effect as laws, but far more
complex in detail.
Bureaucrats - Non-elected government officials and
policy makers
Regulations passed go to Code of Federal Regulation
(CT: Regulations of Connecticut State Agencies)
People do not want to be the one to create hard choices, especially since they are elected in. Instead,
elected officials say “We want clean air” and rely on agencies to create the guidelines
Laws pass more broad outlines, while regulations cover the details
Mandates: Judicial command or order.
TOOLS: Laws, Regulations, Constitution, and Common Law
Tool Users: Courts, Admin Agencies, and Citizen Suits
Techniques: Proceedings, Court Actions, and Citizen Suits
There are two broad approaches to environmental law:
1. Command and Control. (Most common overall, about 90%)
2. Economic and Market Incentive. (Taxing, put a cost to it, and people will stop doing it)
The two are NOT completely separate.
Presumptions and Privileges:
Presumptions are a legal doctrine, that if you can prove “A”, then you presume it applies to “B”.
” Horses have 4 legs, so if I have a horse, we assume it has 4 legs” (No need to re-prove)
If mail was sent by business, presumed it was delivered and read.
Presumption of Innocence is not a written law, but a common law that no one questions.
Privileges are a legal doctrine, not written in constitution but by common law. Some include:
Attorney - Client Privilege
Spousal Privilege
Doctor - Patient Privilege
Priest - Penitent Privilege
There is NO Common law privilege among accountants, tax consultants, or financial advisors.
These are in act because of common law, and will stay unless congress does away with it.
Attorney Work Product
When you have studies done for a client in a lawsuit.
find more resources at oneclass.com
find more resources at oneclass.com