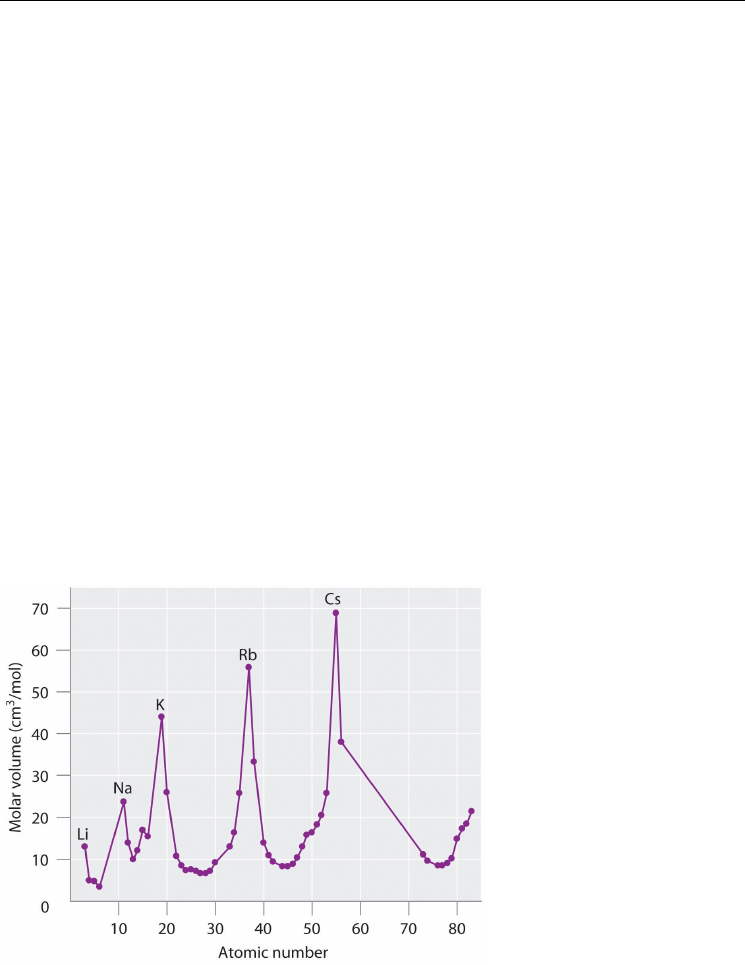 Chapter 9: The Periodic Table and Some Atomic Properties
9.1: Classifying the Elements: The Periodic Law and the Periodic Table
In 1869, Dmitri Mendeleev and Lothar Meyer proposed:
Periodic Law: When the elements are arranged in order of increasing atomic mass, certain sets of
properties recur periodically
Meyer based particle law on the property called atomic volume – the atomic mass of an element
divided by the density of its solid form (now called molar volume)
atomic (molar) volume (cm3/mol) = molar mass (g/mol) x 1/d (cm3/g)
Notice how high atomic volumes recur periodically for alkali metals Li, Na, K, Rb, and Cs.
Meyer also discovered that hardness, compressibility, and boiling points vary periodically.
Mendeleev;s Periodic Table
Periodic table is a tabular arrangement of the elements that groups similar elements together.
Mendeleev’s work attracted more attention than Meyer’s for two reasons:
1. He left blank spaces in his table for undiscovered elements
2. He corrected some atomic mass values
His blanks occurred at atomic masses 44, 68, 72, and 100, which we now know as scandium,
gallium, germanium, and technetium. Two of the atomic masses he corrected were indium and
uranium.
Figure 9.1: Adaptation of Meyer’s 1870 graph plots atomic volume against atomic numbers.
This graph shows the peaks at the alkali metals. Nonmetals fall on the ascending portions of the
curve and metals at the peaks, on the descending portions, and in the valleys. 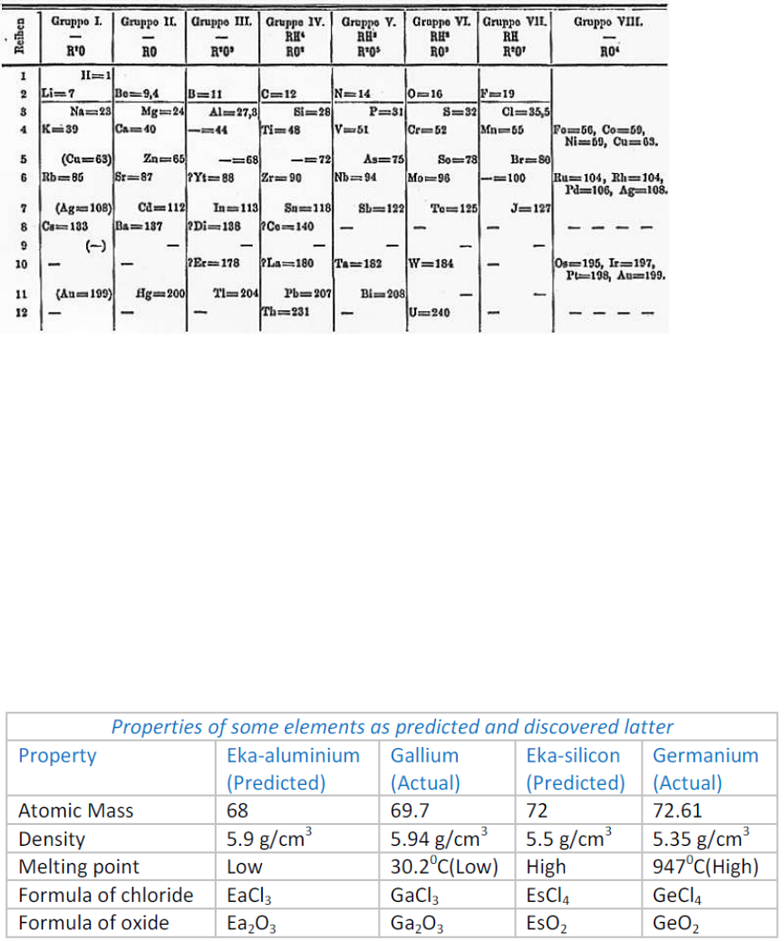 In his periodic table, Mendeleev arranged elements into eight groups and twelve rows. R2O, RO,
and so on, are formulas of the element oxides (Li2O, MgO,…)RH4, RH3, and so forth, are
formulas of the element hydrides (CH4, NH3,…)
In Mendeleev’s table, similar elements fall in vertical groups, and the properties of
elements change gradually from top to bottom in the group. As an example, we have seen that
the alkali metals (Group 1) have high molar volumes. They also have low melting points, which
decrease in order
Li (174oC) > Na (97.8oC) > K (63.7oC) > Rb (38.9oC) > Cs (28.5oC)
Alkali metals exhibit oxidation state +1, forming ionic compounds.
Discovery of New Elements
Three predicted elements were discovered shortly after appearance of Mendeleev’s 1871
periodic table (gallium, 1875; scandium, 1879; germanium, 1886).
Shows how closely Mendeleev’s predictions for eka-silicon agree with observed properties of
element germanium.
One group of elements Mendeleev didn’t anticipate was noble gases, leaving no blanks
for them. William Ramsay, who discovered them, proposed placing them in a separate group.
Because argon, the first noble gas discovered (1894), had an atomic mass greater than that of
chlorine and comparable to that of potassium, Ramsay placed new group (Group 0) between
halogen elements (Group VII) and alkali metals (Group 1).

Atomic Number as the Basis for Periodic Law
Mendeleev placed certain elements out of order of increasing atomic mass to get them
into proper groups of his periodic table – assumed this was because of errors in atomic masses. It
became clear that a few elements would always remain “out of order”, which was at the time
justified by chemical evidence.
X-rays are a high-frequency form of electromagnetic radiation produced when a cathode-
ray (electron) beam strikes the anode of a cathode-ray tube. The anode is called the target. Henry
G. J. Moseley was familiar with Bohr’s atomic model, and explained X-ray emissions as: If the
bombarding electrons have sufficient energy, they can eject electrons from the inner orbitals of
target metal atoms. Electrons from higher orbitals then drop down to fill vacancies, emitting X-
ray photons with energies corresponding to the difference in energy between he originating level
and the vacancy level. Moseley reasoned that because the energies of electron orbitals depend on
nuclear charge, the frequencies of emitted X-rays should depend on the nuclear charges of atoms
in the target. Moseley obtained photographic images of X-ray spectra and assigned frequencies
to the spectral lines and was able to correlate X-ray frequencies to the numbers equal to the
nuclear charges and corresponding to the positions of elements in Mendeleev’s periodic table.
Moseley’s equation is: v = A(Z-b)2 , where v is the X-ray frequency, Z is the atomic number, and
A and b are constants.
From the standpoint of Moseley’s work, should restate the periodic law:
Similar properties recur periodically when elements are arranged according to
increasing atomic number.
Description of a Modern Periodic Table: The Long Form
In periodic table, vertical groups bring together elements with similar properties.
Horizontal periods of the table are arranged in order of increasing atomic number from left to
right. Groups are numbered at the top, and the periods at the extreme left. The first two groups –
the s block – and the last six groups – the p block – together constitute the main-group elements.
d block elements are known as the transition elements, and f block elements are sometimes
called the inner transition elements. f block elements would be too large to fit into the periodic
table, so they’re placed at the bottom. 15 elements following barium are called lanthanides and
the 15 following radon are called the actinides.
9.2: Metals and Nonmetals and Their Ions
Most metals are good conductors of heat and electricity, are malleable and ductile, and
have moderate to high melting points. In general, nonmetals are nonconductors of heat and
electricity and are nonmalleable (brittle) solids, through a number of nonmetals are gases at room
temperature.
Majority of the elements are metals, and nonmetals are confined to the right side of the
table. The noble gases are treated as a special group of nonmetals. Metals and nonmetals are
often separated by a stairstep diagonal line, and several elements near this line are often called
metalloids. Metalloids are elements that look like metals and in some ways behave like metals
but also have some nonmetallic properties.
Physical and chemical properties of an element are determined largely by its electron
configuration, especially that of the valence electronic shell. Adjacent members of a series of
main group elements in the same period have very different properties because they differ in
their valence-electron configurations. Within transition series, differences in electron