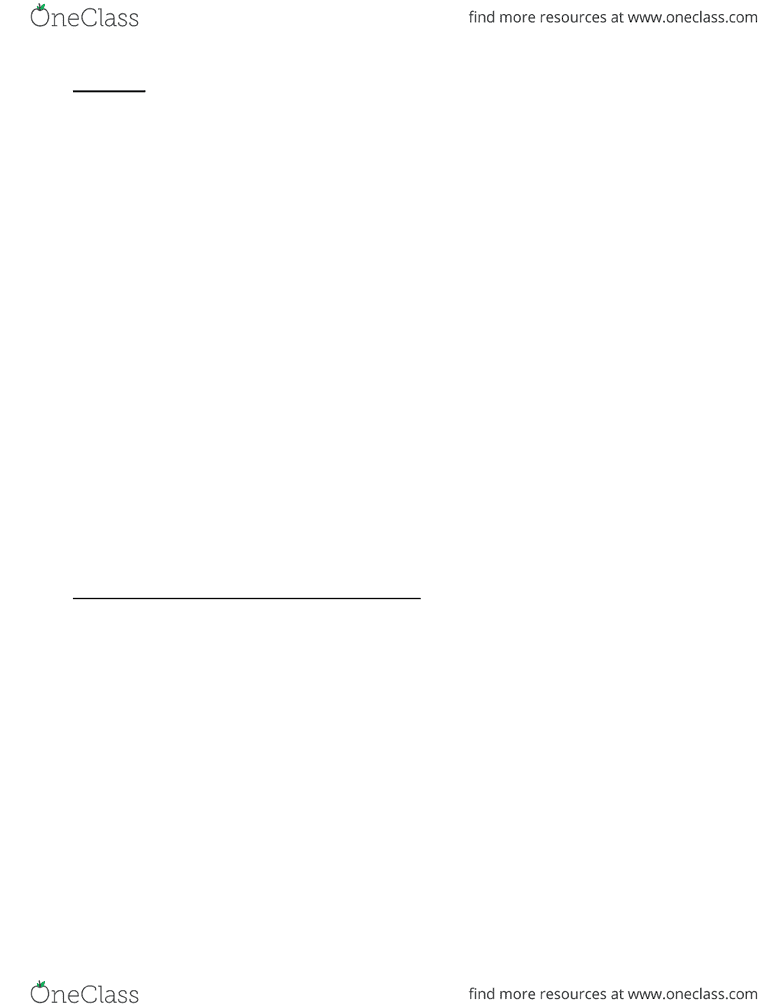 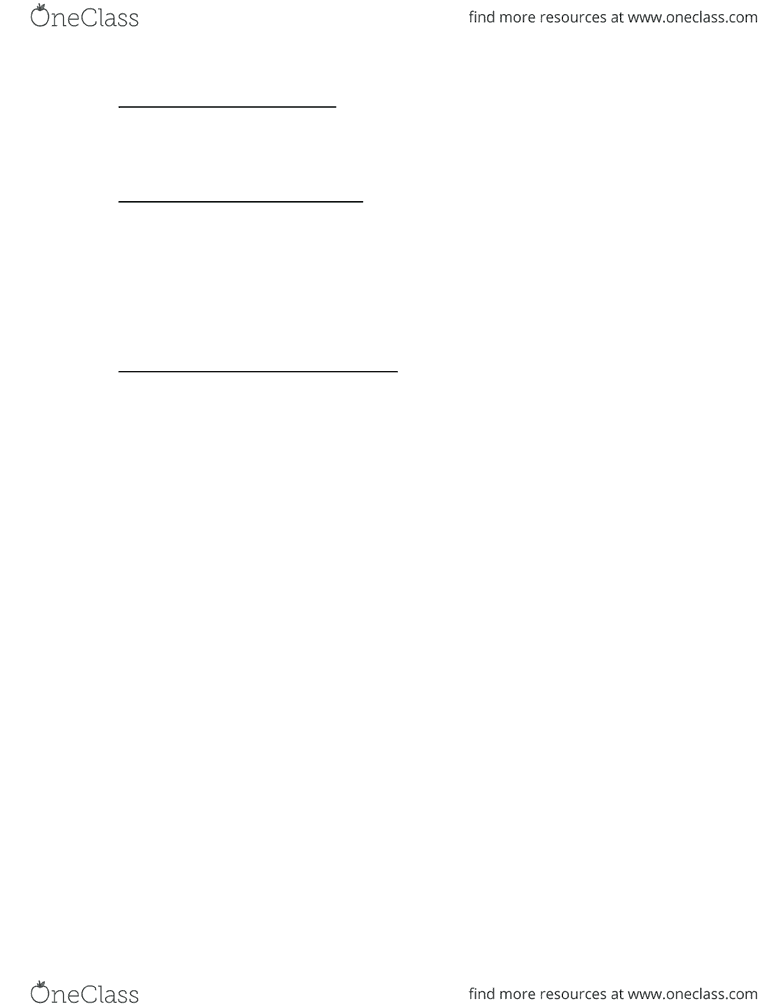 •GESELL: Biological-Maturational
oLooked at physical maturation.
oLORENZ: Ethological theory, built out of Gesell’s theory.
How children develop based on evolutionary pressures (imprinting, etc.)
•FREUD: Psychodynamic-Psychosexual
oFirst stage theory. Said development was discontinuous – children move from one stage
to another and stages are very different (Stages WILL NOT BE TESTED).
oBig problem: his theory was not testable (e.g. can’t test for unconscious processes)
oERIKSON: Psychosocial (developed from Freud’s theory)
Stages = developing sense of identity, as separate from one’s parents.
Stages become more and more complex with age.
If conflict at each stage is not worked out, individual will become stuck.
•WATSON: Learning-Classical Conditioning
oSKINNER – operant conditioning.
oBANDURA – social cognitive (you don’t need to experience yourself, you can watch
someone else experience punishment/reinforcement). Bobo doll.
Focused on getting rid of aggression in T.V.
•PIAGET: Cognitive-Developmental
•VYGOTSKY: Contextual/Sociocultural
oSociety, culture you group up in (not just immediate context).
Perspective Key Assumptions: Development is… Illustrative Theories
Biological Determined by biological factors. -Maturational: development as natural unfolding of a
biological plan.
-Ethological: children’s and parents’ behaviour has
adapted to meet specific enviro. Challenges.
Psychodynamic Determined by how a child resolves
conflicts at different ages. -Freud’s theory: conflict between primitive biological
forces and societal standards of right/wrong.
-Erikson’s theory: challenges posed by the formation of
trust, autonomy, initiative, industry and identity.
Learning Determined by environment. -Skinner’s operant conditioning: role of reinforcement and
punishment.
-Bandura’s social cognitive theory: children’s efforts to
understand the world using reinforcement, punishment
and other’s behaviour.
Cognitive-
developmental Reflective of child’s efforts to
understand the world. -Piaget’s theory: the different stages of thinking that result
from children’s changing theories of the world.
Contextual Influenced by immediate & more distant
environments, which influence each
other.
-Vygotsky’s theory: the role of parents (and other adults) in
conveying culture to the next generation.
See notes: cheat sheets of different perspectives Slides 6-8.
Dynamic systems approach 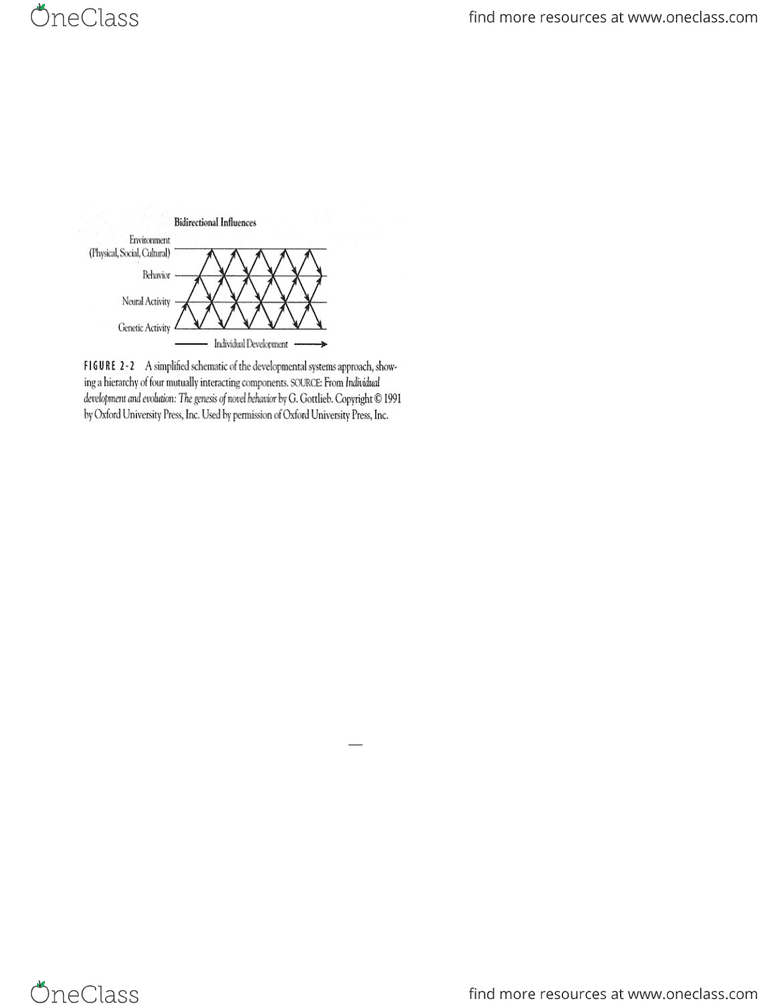 1) Genes can influence how the neurons work in the brain, which in turn influences behaviour, which in
turn influence our environment.
•Genes  brain  behaviour  environment
2) Our environment influences our behaviour, which influences neural activity, influencing genes.
 Next to impossible to determine the influence of genes vs. environment.
Note: it’d very difficult to test using this
perspective as an overarching theory. Most use
it as a guiding principle, but then test at one
specific level (e.g. what’s the influence of
genes on neurons, environment on behaviour,
etc.)
Four Major Themes
1) How well can developmental outcomes be predicted from early life?
Continuous vs. Discontinuous nature. Are early aspects of development (childhood) consistently
related to later aspects (adulthood)?
a. Continuous: e.g. small tree grows into big tree.
i. Not much elemental change, just growth.
ii. Personality doesn’t change, just matures.
b. Discontinuous: e.g. caterpillar, chrysalis in cocoon, butterfly.
i. Child is very different from one stage to the next, qualitatively different and
different stages.
ii. Piaget saw cognitive development as completely different at each stage.
iii. Stage theorists very influential (Freud, Erikson, Kohlberg).
2) How do heredity and environment influence development? (Nature vs. Nurture)
a. Genes vs. physical and social influence
i. Used to be – is nature or nurture responsible for development? Now it is – how
do nature and nurture interact to affect development? Both are important and
both affect development.
b. Timing of experiences often crucial (critical periods).
c. Snowballing effects. Starts with difficult genes, born to parents who had difficultly,
parents are not sensitive, child gets more difficult, parents clamp down harder, etc. More
and more engrained over course of development.
d. E.g. PKU. If you change the environment you can completely change the outcome.
3) What role do children play in their own development? (Active vs. passive child)