OC433785
26 Mar 2015
School
Ryerson University
Department
Information Technology Management
Course
ITM 301
Professor
Franklyn Prescod
Chapter 4: Introduction to TCP/IP
Protocols
Characteristics of TCP/IP (Transmission Control
Protocol/Internet Protocol)
•TCP/IP (Transmission Control Protocol/Internet Protocol): is not simply one
protocol, but rather a suite of specialized protocols—including TCP, IP,
UDP, ARP, and many others— called subprotocols.
•Developed by United states department of defense developed TCP/IP for its
Advanced Research Projects Agency Network (ARPANET)
•TCP/IP has become the standard thanks to several advantages:
•It is open, rather than proprietary—TCP/IP is not owned by a company,
which means you do not need to purchase a license to use it. It costs
nothing and its code can be edited and modified by any programmer.
• It is flexible—The TCP/IP suite of protocols can run on virtually any
platform and connect dissimilar operating systems and devices.
• It is routable—TCP/IP transmissions carry Network layer addressing
information that can be interpreted by routers to determine the best path for
directing data over a network. Not all protocols are routable. Only routable
protocols are suitable for large networks.
The TCP/IP Model
•The TCP/IP suite of protocols can be divided into four layers that roughly
correspond to the seven layers of the OSI model, as depicted in Figure 4-1
and described in the
•
•Application layer—Roughly equivalent to the Application, Presentation, and
Session layers of the OSI model. Applications gain access to the network through
this layer, via protocols such as HTTP (Hypertext Transfer Protocol), FTP (File
Transfer Protocol), Telnet, NTP (Network Time Protocol), DHCP (Dynamic Host
Configuration Protocol), and PING (Packet Internet Groper), to name only some.
Unlock document

Already have an account? Log in
•Transport layer—Roughly corresponds to the Transport layer of the OSI model.
This layer holds the Transmission Control Protocol (TCP) and User Datagram
Protocol (UDP), which provide flow control, error checking, and sequencing.
•Internet layer—Equivalent to the Network layer of the OSI model. This layer
holds the Internet Protocol (IP), Internet Control Message Protocol (ICMP),
Internet Group Management Protocol (IGMP), and Address Resolution Protocol
(ARP). These protocols handle routing and address resolution.
•Network Interface layer (or Link layer)—Roughly equivalent to the Data Link
and Physical layers of the OSI model. Functions in this layer handle formatting of
data and transmission to the network interface.
The TCP/IP Core Protocols
Certain subprotocols of the TCP/IP suite, called TCP/IP core protocols, operate in
the Trans- port or Network layers of the OSI model and provide basic services to
protocols in other layers. As you might guess, TCP and IP are the most significant
protocols in the TCP/IP suite. These and other core protocols are introduced in the
following sections.
TCP (TRANSMISSION CONTROL PROTOCOL): operates in the Transport
layer of the TCP/IP and OSI models and provides reliable data delivery services.
TCP is a connection-oriented subprotocol, which means that a connection must be
established between communicating nodes before this protocol will transmit data.
•Suppose you were standing by a lake trying to communicate with a friend in a
boat floating 100 yards offshore on a foggy afternoon. You need to give her an
urgent message about a storm that’s fast approaching. You could shout at her, but
you might not know whether she heard you correctly, if at all. To be certain she
gets your message, it would be better to call her cell phone and talk. Similar to
completing a phone call and making sure your friend answers and can hear you
before you tell her about the storm, in data communications, TCP is the protocol
that ensures a connection has been made before it allows the message to
continue.
•TCP further ensures reliable data delivery through sequencing and checksums. In
the analogy of communicating with a friend offshore, this would be similar to
asking her to confirm that she understood your warning.
•Finally, TCP provides flow control to ensure that a node is not flooded with data.
In the case of communicating with a friend in a boat, this would be like speaking
slowly enough over the phone so that she can hear every word and understand
your message.
Fields in a TCP segment include the following:
Unlock document 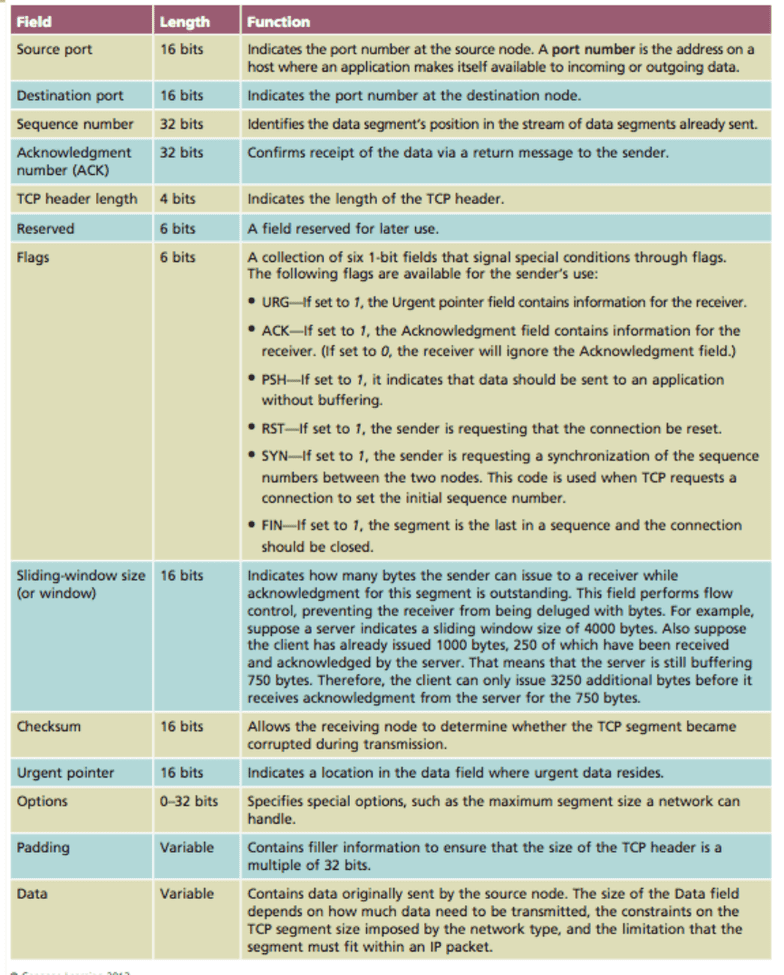 UDP (USER DATAGRAM PROTOCOL): like TCP, belongs to the Transport
layer of the TCP/IP and OSI models. Unlike TCP, however, UDP is a
connectionless transport service. In other words, UDP offers no assurance that
packets will be received in the correct sequence. In fact, this protocol does not
guarantee that the packets will be received at all. Furthermore, it provides no error
checking or sequencing.
Unlock document