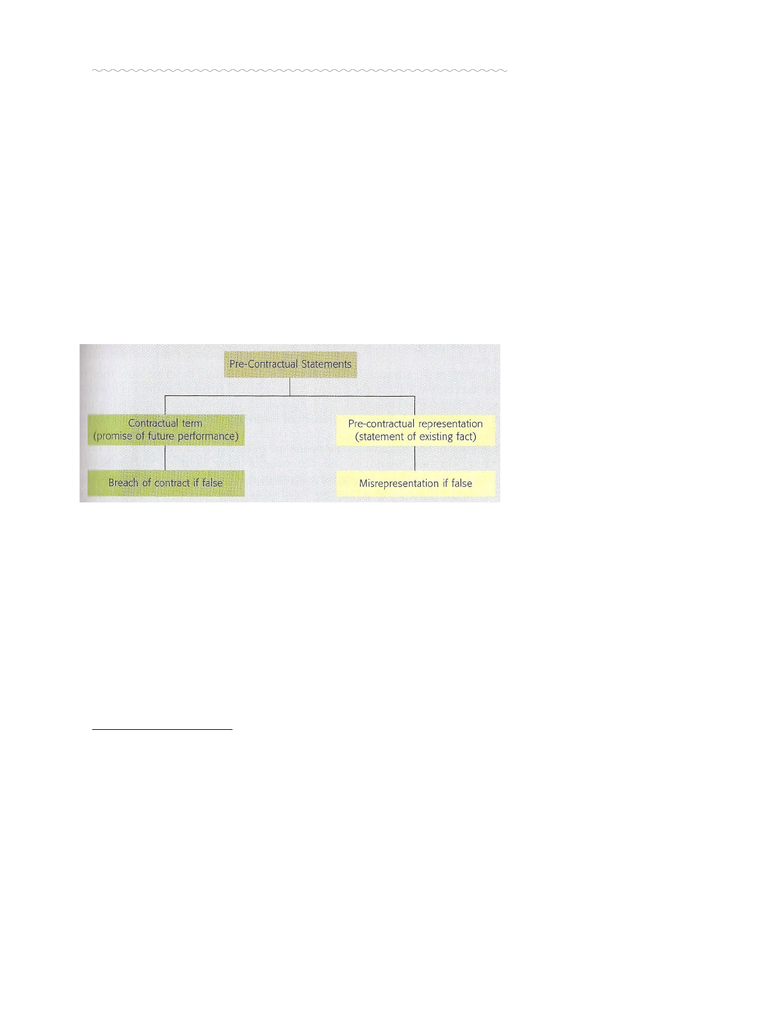 Chapter 9: Representations & Terms
It is also risky to offer an opinion if you have no reason to believe that it is actually
true.
During pre-contractual negotiation, a person may describe how they will act in the future
oFuture Conduct: is a second type of non-factual statement. It is a non-promissory statement as
to a party’s future conduct & is usually not usually treated as a misrepresentation.
However, a statement of future conduct is a misrepresentation if it is made fraudulently
or if the future conduct is described in terms of present intention.
However, the court may find a misrepresentation if you inaccurately describe the
consequence of a law.
E.g. Suppose you are trying to persuade me to buy your land. It is not a
misrepresentation if you in incorrectly tell me that the zoning laws do not
apply to the property. That is a matter of law. However, it may be a
misrepresentation if you inaccurately tell me that zoning approval has been
granted and that I therefore would be able to develop the land.
Silence as Misrepresentation
As a general rule, parties are not required to disclose material facts during pre-contractual
negotiations, no matter how unethical non-disclosure may be.
There are, however, at least 4 occasions when failure to speak will amount to misrepresentation:
i.When silence would distort a previous assertion: A party’s silence sometimes
has the effect of falsifying a statement that was previously true. When a change in
circumstances affects the accuracy of an earlier representation, the party that made
that statement has a duty to disclose the change to the other party. Failure to do so
amounts to a misrepresentation. A misrepresentation may also occur if a party tells
half of the truth and remains silent on the other half.
ii.When the contract requires a duty of utmost good faith: the requirement of
utmost faith arises when one party is in a unique position to know the material fact.
The best e.g. involves insurance contracts. Since the customer is the only person that
has the info required by insurance comp., the law imposes an obligation of good faith
that requires the customer to disclose all of the relevant facts. A breach of that
obligation = insurance comp can avoid the contract.
iii.When a special relationship exists b/t the parties: When the relationship b/t two
parties is one of trust, or when one of the parties has some other form of special
influence over the other, a duty of disclosure may arise. E.g. pg 195
iv.When a statutory provision requires disclosure: Some statute requires the
disclosure of material facts in a contractual setting.
Insurance legislation in many provinces contains statutory conditions that
are deemed to be part of every insurance contract and must be printed on
every document. Many provinces have statutes that automatically insert
certain conditions into every insurance contract.
Some financial officers have a duty to disclose material facts. E.g. an officer
or director has to speak up if they have an interest in a contract with their
own company. If they fail to do so, the company may be entitled to set aside
the contract. The same holds true for some Crown corporations. A similar
disclosure requirement arises in the securities law.
Many provinces have legislation regulating the formation of domestic
contracts. If a party failed to disclose significant assets or significant
2 of 8
www.notesolution.com
Unlock document

Chapter 9: Representations & Terms
liabilities that existed when the domestic contract was made, the court can
set aside the agreement or a provision in it.
Inducement
For a statement to be actionable as a misrepresentation, the deceived party must prove that the
false statement induced the contract. The statement does not have to be the only inducing factor.
However, a statement will not be actionable if it didn’t affect the recipient’s decision, even if the
other party made the representation with the intention to deceive.
The Legal Consequences of Misrepresentation
There are 2 possible consequences of an actionable misrepresentation. The deceived party may
receive:1.The remedy of rescission
2.The right to damages
1. Rescission
Is the only contractual consequence of misrepresentation
oRescission: is the cancellation of a contract by the court with the aim of restoring the parties,
to the greatest extent possible, to their pre-contractual state.
It is sometimes difficult to know in advance whether the court will grant the
rescission b/c it is a discretionary remedy, one that is not available as of right. The
remedy Is awarded on the basis of the court’s judgement about what is best according
to the rule of reason and justice.
The order of rescission is often accompanied by an order for restitution.
oRestitution: involves a giving back and taking back on both sides.
E.g. you want to buy waterproof paint to make snowboards. A supplier represents
that it has waterproof paints to sell but insists you buy 4 shipments over the next 2
years. When the first shipment comes you discover that the paint is not waterproof.
Thus you want your money back, and the supplier wants it paint back after it gives u
your money back.
The victim of misrepresentation may be disqualified from rescission in certain circumstances.
i. If the misled party affirmed the contract, then rescission is not available.
Affirmation occurs when the misled party declares an intention to carry out the
contract or otherwise act as though it is bound by it. E.g. If discover the 1st shipment
of paint is not waterproof but you do nothing about it, but six month later you
receive the 2nd shipment then complain that neither shipment was waterproof. That 6
month lapse of time suggests that you affirmed the contract.
ii.Rescission may be disqualified if restitution is impossible. If a party cannot be
substantially returned to their pre-contractual positions, a court is reluctant to grant
rescission. – The more that has been done under the contract; the less likely the court
is to grant rescission.
iii.Rescission may be unavailable if it would affect a third party. In this case, it is the
right of the 3rd party that makes restitution impossible.
2. Damages
A court may responds to misrepresentation by awarding damages against the party that made
the statement.
3 of 8
www.notesolution.com
Unlock document