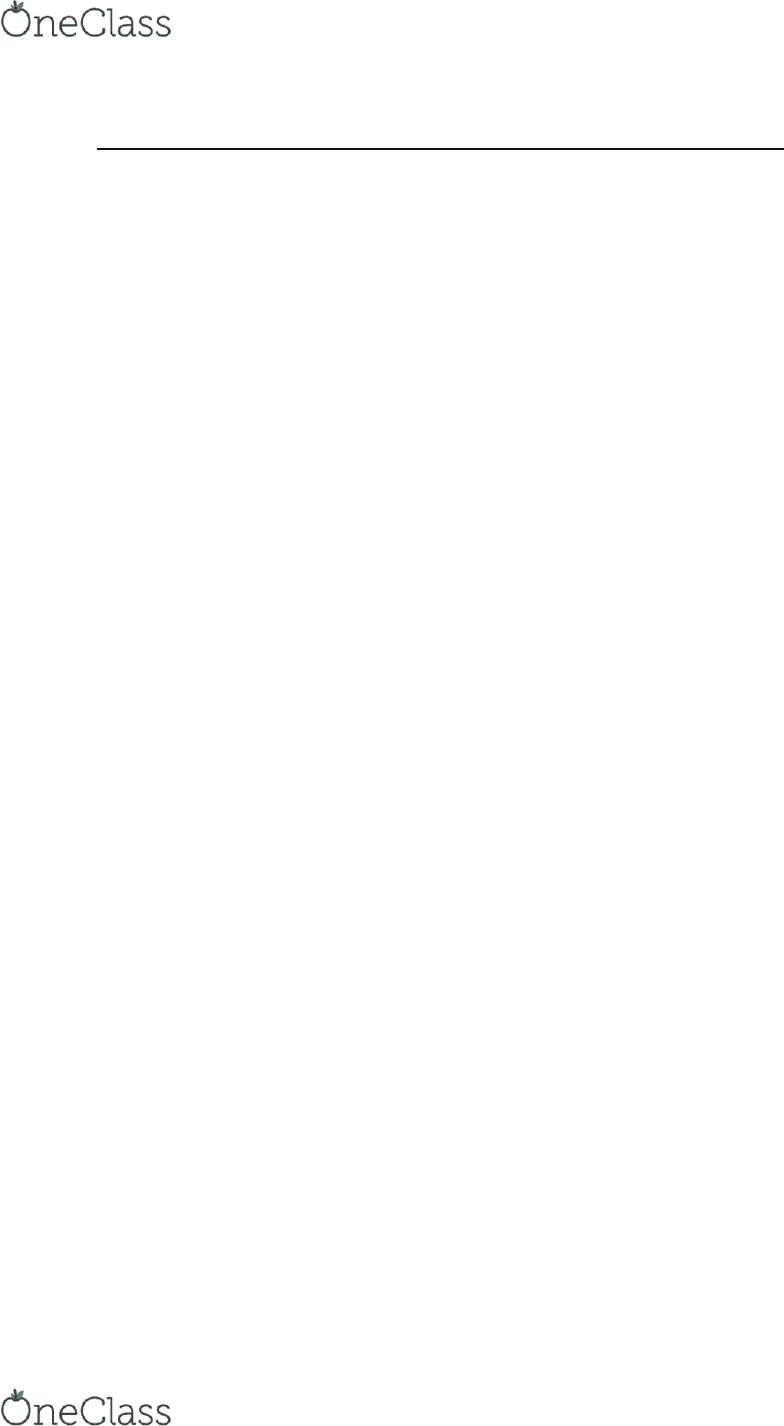 LAW 603 Chapter 24 Notes: Dealing with Bankruptcy and Insolvency
-Focus: Risk of business failure
-More than 80% of small businesses in Canada fail during the first 5 years of
operation
Insolvent: a person is insolvent when their debts exceed their assets, or they cannot meet
their liabilities as they come due
Bankrupt: a person becomes bankrupt by assigning themselves into bankruptcy or as a
result of a creditor applying to a court for a bankruptcy order against them
Stay: a stay is a suspension of legal proceedings against a debtor
Liquidation: is the sale of the debtor’s assets in return for money, which is “liquid” and can
be distributed to the bankrupt’s creditors
Discharge: is the release of a debtor from bankruptcy status and the debtor is free of all of
their pre-bankruptcy debts, subject to certain limited exceptions.
-Goal is to provide for the orderly and predictable distribution of the debtor’s assets
amongst their creditors
-Goal is to provide debtors (individuals) a fresh start through their discharge from
bankruptcy
Proposal: is a court-approved arrangement between a debtor and their creditors
providing for a restructuring of the debtor’s debts and other financial affairs outside of
formal bankruptcy
-If the proposal is successful, the debtor continues to operate their business in most
cases (like a new agreement)
-If not, the debtor is placed into bankruptcy
-Proposals are used to provide time and a process by which a business can be
restructured under court supervision in situations where creditors are more likely
to recover more of what is owed to them if the debtor continues their business than
if the assets are sold in a liquidation
-Creditors sustain significant monetary and non-monetary (established
relationships, goodwill) costs
find more resources at oneclass.com
find more resources at oneclass.com
Unlock document

Goodwill: is a business’s favourable and valuable public reputation
Authority to Regulate Bankruptcy and Insolvency
-Power to enact bankruptcy legislation is exclusive to the federal government
-The Bankruptcy and Insolvency Act (BIA) provides a framework to administer the
bankruptcy process, various kinds of proceedings in bankruptcy, non-bankruptcy
alternatives (proposals), detailed regulations concerning the administration and
distribution of the debtor’s property, duties of a bankrupt, and miscellaneous
matters
Bankruptcy and Insolvency Law
-Before the enactment of modern bankruptcy law, a creditor’s only option was to sue
a debtor for non-payment  led to a stampede of creditors trying to claim the same
assets of the debtor (ranking of which creditor gets assets was difficult to
determine)
-Advantages to modern bankruptcy law:
oSingle proceeding prevented a race to the courts (first creditor getting more,
rest of creditors get rest of what is left)
oBecause debtor was exposed to only one set of legal proceedings, their assets
were not depleted by paying for lawyers to defend a variety of claims
oThe bankrupt was given a fresh start
-The BIA aims to
oprovide for a timely, orderly, and equitable distribution of the bankrupt’s
assets to creditors in accordance with clear rules establishing the priority of
creditor’s claims
oprovide for the rehabilitation of debtors through a discharge that frees them
from prior debts
oLimit possibility of discharge for certain debts that are considered socially
important (family support obligations, student loans, etc.)
odeter fraudulent pre-bankruptcy transfers by debtors and transfers that
prefer particular creditors over others
find more resources at oneclass.com
find more resources at oneclass.com
Unlock document

opromote confidence and certainty of the credit system
opromote national uniformity of laws
Bankruptcy and Insolvency under the bankruptcy and insolvency act
Insolvency: is the inability of a debtor to meet their financial obligations to their creditors
-The debtor is unable to meet their liabilities as they become due
-The debtor has ceased paying their current obligations in the ordinary course of
business as they generally become due
-The aggregate of the debtor’s property is n, at a fair valuation, sufficient or, if
disposed of, would not be sufficient to enable payment of all obligations due and
becoming due
Bankruptcy: is the legal status of a person who has either made an assignment in
bankruptcy or had a bankruptcy order made against them by a court or other official based
on a creditor’s application
-Must have committed an “act of bankruptcy”
-Usually involves being insolvent
-Creditors are often prepared to wait well beyond mere insolvency to being
bankruptcy proceedings
Assignment: is a procedure by which a debtor voluntarily becomes bankrupt
Corporate and Consumer Bankruptcy
-More consumers than corporations enter into bankruptcy
-Two differences between consumer and corporate bankruptcy
1. Proposals by corporations to their creditors to settle their obligations require
the approval of a majority of creditors in each class of creditors. Consumer
debtors can make a simplified form of proposal that needs to be approved by
only a majority of all creditors
2. Corporate debtors are rarely discharged from bankruptcy unless they paid all of
their debts. Consumer debtors who demonstrate responsible behaviour after
bankruptcy are usually discharged within 9 months
Officials Involved in Bankruptcy Procedures
find more resources at oneclass.com
find more resources at oneclass.com
Unlock document