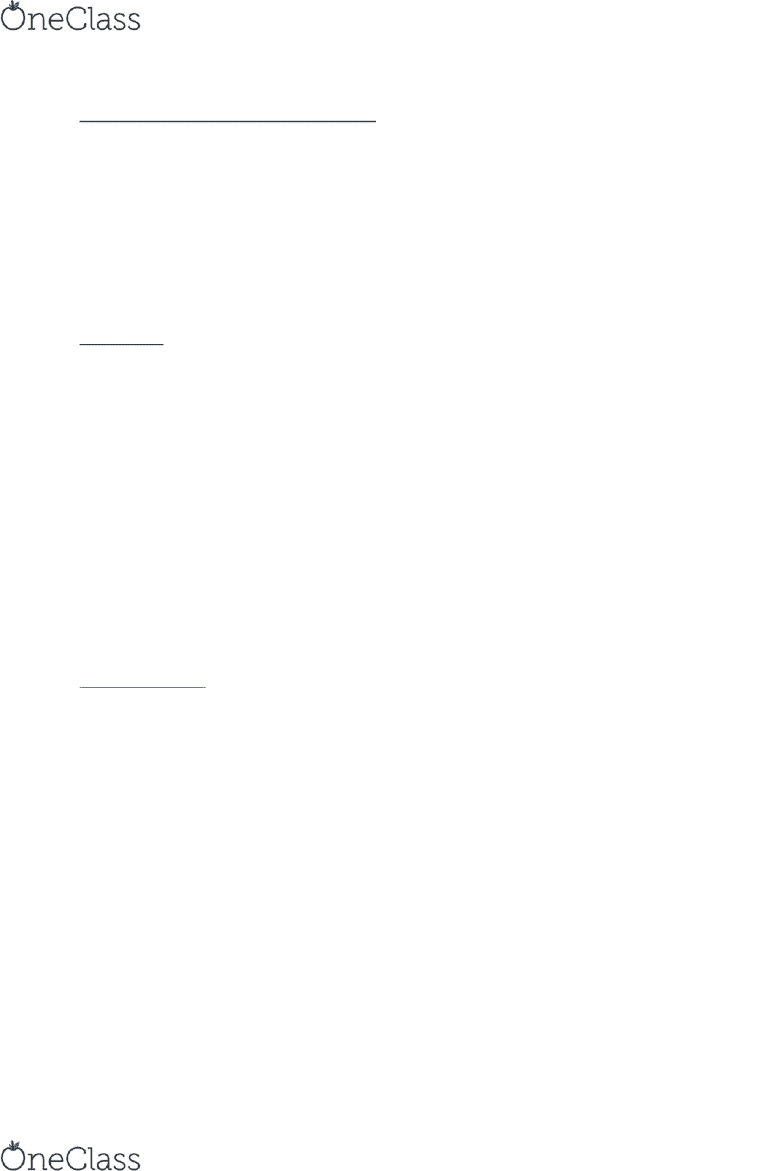 BIOM*3200 Synaptic Transmission & Muscle Physiology Week 9
By the end of this unit you should be able to:
1. Describe the stages of neuron impulse transmission for both chemical and electrical synapses.
2. Identify members of the following classes of neurotransmitters,: choline derivatives, amines,
amino acids and neuropeptides.
3. Identify the functional anatomy of skeletal muscle from the fibre level to the sarcomere.
4. Identify banding of the sarcomere and describe how arrangement of myofilaments produces the
banding.
5. Describe the sliding filament theory of contraction.
6. Describe the differences between skeletal, cardiac and smooth muscle.
The Synapse
Action potentials often stop at the axon terminal. This is where they will simulate the release of
chemical neurotransmitters which will affect the next cell, instead of directly stimulating it.
The synapse is the connection between a neuron and a second cell. In the CNS, the second cell is
another neuron, but in the PNS it can be a neuron or an effector cell within a muscle or gland. The
physiology of neuron-neuron synapses and neuron-muscle synapses are similar but neuron-muscle
synapses are often called myoneural, or neuromuscular junctions.
Neuron-neuron synapses usually involve a connection between the axon of one neuron and the
dendrites, cell body, or axon of a second neuron. These are called axodendric, axosomatic, and
axoaxonic synapses. In almost all synapses, transmission is in one direction only, from the axon of the
first (presynaptic) neuron to the second (postsynaptic) neuron.
Synapses are chemical, involving neurotransmitters, but there are instances where electrical synapses
exist. These are found within smooth muscles, and between cardiac cells in the heart.
Electrical Synapses
-found in smooth and cardiac muscle, between some neurons of the brain, and between glial cells
-cells are joined by gap junctions
-stimulation causes phosphorylation or dephosphorylation of connexin proteins to open or close
channels
Electrical Synapses: Gap Junctions
In order for two cells to be electrically coupled, they must be approximately equal in size and they must
e joied  areas of otat ith lo eletrial resistae. This is to esure that ipulses are’t
interrupted. Adjacent cells that are electrically coupled are joined together by gap junctions. This means
that the membrane of the two cells are separated only by 2nm. In the plasma membrane of each
apposed cell, six proteins called connexins come together to form a transmembrane structure with an
aqueous core. Each of these composes half of the gap junction, called a hemichannel. When two
hemichannels dock together they form a complete gap junction, it connects both membranes and allows
ions and molecules to pass from one cell to the other.
find more resources at oneclass.com
find more resources at oneclass.com
Unlock document

BIOM*3200 Synaptic Transmission & Muscle Physiology Week 9
Chemical Synapses
-involve the release of chemicals called neurotransmitters fro the ao’s terial outos.
-the presynaptic and postsynaptic cells are held close together by cell adhesion molecules (CAMs)
Chemical Synapses
Presynaptic endings are called terminal boutons because of their swollen appearance, and they are
separated from the postsynaptic cell by a synaptic cleft.
Chemical transmission requires that the synaptic cleft be very narrow, so that the neurotransmitters are
released near their receptor proteins on the postsynaptic membrane. The physical association of the
pre- and postsynaptic membranes is stabilized by cell adhesion molecules (CAMs), which bond together
on both sides. This ensures that the two membranes stay in close proximity to each other for rapid
chemical transmission.
Neurotransmitters in the presynaptic neuron are contained within many small, membrane-enclosed
synaptic vesicles. Exocytosis of synaptic vesicles, and the consequent release of neurotransmitters into
the synaptic cleft, is triggered by action potentials that stimulate the entry of Ca2+ into the axon
terminal through voltage-gated Ca2+ channels. The greater the frequency of action potentials in the
presynaptic axon, the greater the stimulation of the postsynaptic neuron.
Calcium is released as a result of the action potential. This triggers a lot of shit but the most important
thing being the activation of calmodulin. This activates kinase which phosphorylates other regulatory
proteins which activates a cascade that contributes to synaptic vesicle exocytosis.
Before an action potential, many synaptic vesicles are already attached to specialized sites of the
presynaptic membrane. This attachment involves a SNARE complex of proteins that bridge the vesicle
membrane and the plasma membrane. The SNARE proteins include on vesicle membrane, and two
plasma membrane proteins. When Ca2+ is released, Ca2+ enters the cytoplasm and binds to a Ca2+
sensor protein (synaptotagmin), anchored to the synaptic vesicle membrane. Then the plasma and
vesicle membranes are fused and all the shit gets released into the synapse.
When they are released into the synapse they bind to specific receptor proteins on the postsynaptic
membrane via their ligand. This causes ion channels to open in the post synaptic membrane. These are
called chemically regulated gates.
These chemically regulated ion channels produce a graded charge in the membrane potential, called
graded potential. The inside of the membrane will become less negative (when Na+ or Ca2+ enter). This
depolarization is called excitatory postsynaptic potential (EPSP). When Cl- enters, it will produce a
graded hyperpolarization, this is called inhibitory postsynaptic potential (IPSP).
Excitatory postsynaptic potentials stimulate the postsynaptic cell to produce action potentials, and
inhibitory postsynaptic potentials antagonize this effect.
Synaptic potentials (EPSPs and IPSPs) decrease in amplitude as they are conducted along the dendrites
and cell body to the axon hillock. Adjacent to the axon hillock, is the axon initial segment. This has a
high density of Na+ and K+ channels and is the region where the action potential is first produced. Once
action potentials are produced at the initial segment, they will regenerate themselves along the axon.
find more resources at oneclass.com
find more resources at oneclass.com
Unlock document

BIOM*3200 Synaptic Transmission & Muscle Physiology Week 9
Acetylcholine as a Neurotransmitter
Acetylcholine (ACh) is used as an excitatory neurotransmitter by some neurons in the CNS and by
somatic motor neurons at the neuromuscular junction. At autonomic nerve endings, ACh may be
excitatory or inhibitory, it depends on the organ involved.
ACh excites skeletal muscle, inhibits cardiac tissue, and excites or inhibits smooth muscles or glands
depending on the location.
Postsynaptic cells can have varying responses to the same chemical partly because different
postsynaptic cells have different subtypes of ACh receptors. These receptor subtypes can be specifically
stimulated by particular toxins and are named for these toxins.
1. Nicotinic ACh receptors. These are found in specific regions of the brain, in autonomic ganglia, and in
skeletal muscle fibers. The release of ACh from somatic motor neurons and its subsequent binding to
nicotinic receptors, for example, stimulates skeletal muscle contraction.
2. Muscarinic ACh receptors. These are found in the plasma membrane of smooth muscle cells, cardiac
muscle cells, and the cells of particular glands. Thus, the activation of muscarinic ACh receptors by ACh
released from autonomic axons is required for the regulation of the cardio vascular system, digestive
system, and others. Muscarinic ACh receptors are also found in the brain.
Chemically Regulated Channels
A neurotransmitter molecule is the ligand that binds to its specific receptor protein. For ion channels
that are ligad-gated, the reeptor protei is also a io channel; these are two functions of the same
protein. Part of this protein has extracellular sites that bind to the neurotransmitter ligands, while part
of the protein spans the plasma membrane and has a central ion channel.
The nicotinic ACh receptor can serve as an example of ligand-gated channels. Two of its five polypeptide
subunits contain ACh-binding sites, and the channel opens when both sites bind to ACh. The opening of
this channel permits the simultaneous diffusion of Na+ into and K+ out of the postsynaptic cell. The
effects of the inward flow of Na+ predominate because of its steeper electrochemical gradient.
This produces the depolarization of an excitatory postsynaptic potential (EPSP).
Although the inward diffusion of Na+ predominates in an EPSP, the simultaneous outward diffusion of
K+ prevents the depolarization from overshooting 0 mV.
Action potentials occur in axons, where the voltage-gated channels are located, whereas EPSPs occur in
the dendrites and cell body. Unlike action potentials, EPSPs have no threshold; the ACh released from a
single synaptic vesicle produces a tiny depolarization of the postsynaptic membrane. When more
vesicles are stimulated to release their ACh, the depolarization is correspondingly greater. EPSPs are
therefore graded in magnitude, unlike all-or-none action potentials. Because EPSPs can be graded and
have no refractory period, they are capable of summation. That is, the depolarizations of several
different EPSPs can be added together. Action potentials are prevented from summating by their all-or-
none nature and by their refractory periods.
There is another group of chemically regulated ion channels that, like the ligand-gated channels, are
opened by the binding of a neurotransmitter to its receptor protein. However, this group of channels
find more resources at oneclass.com
find more resources at oneclass.com
Unlock document