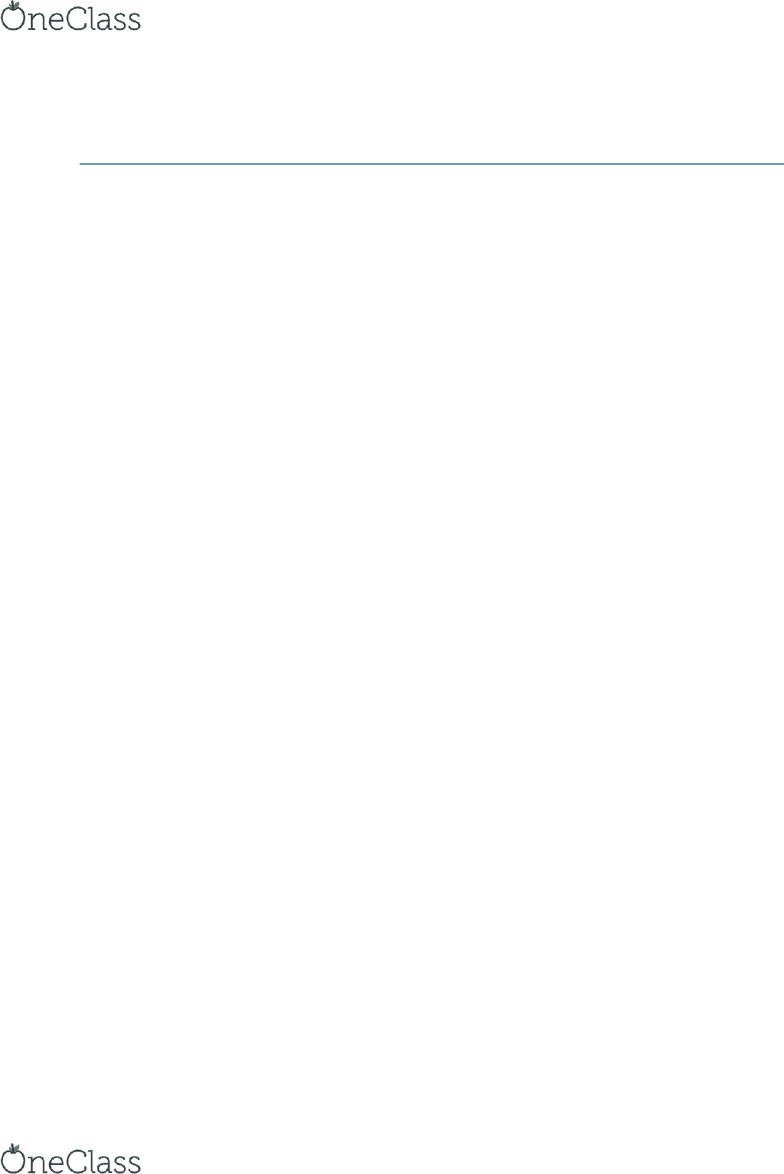 12 ed. Pages 525 - 566
Mammalian Physiology BIOM*3200
Lauren Graham, lgraha06@uoguelph.ca
Unit 10 ~ Respiration
The Respiratory System
3 FUNCTIONS:
1. Ventilation = a mechanical process called breathing. oxygen concentration of air is
higher in the lungs than in the blood and oxygen diffuses down its concentration gradient into the
blood. Carbon dioxide however moves from blood to air.
2. Gas Exchange = occurs between air and blood in the lungs and between the blood and
other tissues of the body (external respiration)
3.Oxygen Utilization = tissues of the body during cell respiration (internal respiration)
ALVEOLI:
The air blood barrier of the alveoli is very thin, with large SA (for the diffusion of gasses) but it
is strong enough to withstand high stress during heavy exercise and lung inflation.
they are a polyhedral shape found in honeycomb like clusters. air within one member of a cluster
can enter other members through tiny pores.
Type One: 95% of the total surface area of the lung used for gas exchange.
Type Two: Cells that secret pulmonary surfactant and the reabsorb Na+ and water, preventing
the buildup of fluid in the alveoli.
2 FUNCTIONAL ZONES:
Respiratory Zone: site of gas exchange between air and blood (in the alveoli). includes the
Respiratory Bronchioles and Alveolar Sacs.
Conducting Zone: includes anatomical structures where air passes before reaching the
respiratory zone (Mouth, Nose, Pharynx, Larynx, Trachea, Primary Bronchus, Bronchial tree and
Terminal Bronchiole). these structures also warm and moisten (protects tissues from becoming
desiccated) the inspired air while filtering and cleaning unwanted particles out. air is brought to
body temperature (37C).
DIAPHRAGM:
a dome shaped striated muscle which divides the anterior body into two parts.
1. Abdominopelvic Cavity is BELOW the diaphragm and contains the digestive system
and other organs.
2. Thoracic Cavity is ABOVE the diaphragm and contains the heart, lungs, large blood
vessels , trachea, esophagus and thymus. there are 2 layers of wet epithelial membrane called the
pleural membranes. The Parietal Pleura (superficial layer) lines the thoracic wall and the Visceral
Pleura (deep layer) covers the surface of the lungs.
The Physical Aspects of Ventilation
find more resources at oneclass.com
find more resources at oneclass.com
Unlock document

12 ed. Pages 525 - 566
Mammalian Physiology BIOM*3200
Lauren Graham, lgraha06@uoguelph.ca
Movement of air in and out of lungs is due to pressure differences induced by lung volume and
influenced by the lungs elasticity and surface tension.
Visceral and parietal pleurae are stuck to each other and the space between them is called the
intrapleural space which is a thin layer of fluid. this serves as a lubricant do the lungs can slide
with the chest.
INTRAPULMONARY PRESSURE:
Air enters the lungs during inspiration due to the atmospheric pressure being greater than
the intrapulmonary pressure. intrapulmonary pressure must fall below atmospheric
presser to cause inspiration to about 3 mmHg below atmospheric pressure (-3 mmHg).
Expiration occurs when the intrapulmonary pressure is greater than the atmospheric
pressure (+3 mmHg). elastic tension of the lungs and thoracic wall pull apart from each
other which is how the sub-atmospheric pressure is produced.
INTRAPLEURAL PRESSURE:
intrapleural pressure is lower during inspiration because of the expansion of the thoracic
cavity that it is during expiration. The intrapleural pressure is normally lower than the
intrapulmonary pressure during both inhalation and exhalation. This difference in
pressures is called transpulmonary pressure, this pressure keeps the lungs against the
chest wall.
BOYLE'S LAW:
The pressure of a given quantity of gas is inversely proportional to its volume.
an increase in lung volume during respiration decreases intrapulmonary pressure to
subatmosphereic levels. a decrease in volume increases pressure.
COMPLIANCE:
Is the ease with which the lungs can expand under pressure and is a change in lung
volume per change in transpulmonary pressure. the compliance of the lungs is reduced by
factors that produce a resistance to distension.
ELASTICITY:
The intensity of a structure to return to its initial size after being distended. Lungs are
very elastic are resist distension, they are always in a state of elastic tension. Elastic
tension increases during inhalation and reduces during exhalation via elastic recoil.
SURFACE TENSION:
surface tension is exerted by fluid in the alveoli and it also resists distension. lungs both
secrete and absorb fluid in two antagonistic processes. Fluid absorption is driven through
the active trasport of Na+ which fluid secretion is driven by the active transport of Cl- .
Thin film of fluid normally present in the alveolus has surface tension, where water
molecules at the surface are attracted to other water molecules. This tension acts to
collapse the alveolus and in the process increases the pressure of air within the alveolus.
find more resources at oneclass.com
find more resources at oneclass.com
Unlock document

12 ed. Pages 525 - 566
Mammalian Physiology BIOM*3200
Lauren Graham, lgraha06@uoguelph.ca
The Law of Laplace states that the pressure created is directly proportional to the surface
tension and inversely proportional to the radius of the alveolus. a smaller alveolus would
be greater than in a larger alveolus.
SURFACTANT:
Alveolar fluid contains a substance that reduces the surface tension. This substance is
called surfactant and is secreted into the alveoli by type two alveolar cells. This fluid
consist of phospholipids and hydrophobic surfactant proteins. When surfactant becomes
interspersed between water molecules at the water-air interface it reduces the hydrogen
bonds between water molecules therefore reducing surface tension. surfactant prevents
the alveoli from collapsing during expiration and less surface tension has to be over come
during the next inhalation.
Mechanisms of Breathing
Inspiration results from muscle contraction and expiration results in muscle relaxation and elastic
recoil.
INSPIRATION and EXPIRATION:
Unforced (quiet) inspiration: results from contraction of the diaphragm (where it lowers
and flattens). Contraction of the diaphragm increases thoracic volume vertically.
contraction of the parasternal and external intercostals (muscles between the ribs)
increase thoracic volume laterally and the ribs raise. This is a passive process, which
means that all the muscles relaxed via elastic recoil and the pressure increase above
atmospheric and the sir is expelled.
Forced (deep) inspiration: Other thoracic muscles such as the scalenes and pectoralis
minor (and sometimes the sternocleidomastoid muscles) contract which stretches ribs in
the anteropostereior direction and the upper rib cage is stabilized which allows
intercostals to work more efficiently. Intercostal muscles contract and depress the rib
cage while abdominal muscles also help to decreases the volume of the thorax.
intrapulmonary pressure can reach up to 20 or 30 mmHg.
Both: contractions decrease intrapulmonary pressure and air flows into the lungs. there is
a chart that summarizes. (Table 16.2)
RESPIRATORY VOLUMES AND CAPACITIES:
find more resources at oneclass.com
find more resources at oneclass.com
Unlock document