Chapter 6 - Grasping the World: Infants at 3-6 Months
Developmental Domains
1. Physical development
•Growth
oWeight, height, and head circumference - these measurements are major
indicators of health
oBabies may double (or nearly double) their birth weight by ~6 mths
oBaby’s rapid head growth most noticeable btwn 3 and 6 mths - increases as
much as ⅜ inch per month (important = observable indicator of brain
development)
oBaby’s length increases as much as ½ inch a month
oBowed legs are usual (not something to worry over) - bones are still
malleable, bc the ossification and calcification processes have not yet
hardened them
oRestrictions on babies (due to too small clothes) can influence growth and
formation of bones
oFrom sleeping on their backs (to prevent SIDs), babies are more frequently
seen with heads that are flatter at the back - won’t last bc of the skull’s
malleability and it will return to a more rounded shape in time. Baby may also
have a bald spot at the back of the head for this same reason. Neither of these
issues are ongoing.
oFeeding patterns, activity levels, and individual differences contribute to the
baby’s growth
•Physical skills
oThe coordination required to see objects and learn how to hold them is a
complex skill gained at this stage
oBaby learns to grasp objects, then pass them from hand to hand
oObjects must be small enough to be picked up but not too small bc baby will
put objects in his or her mouth
oBodily control increases significantly
•Gross motor skills
oBabies increase their back control and may be able to sit, supported at first
and then unsupported, for short periods
oToppling occurs because they are not yet able to rotate their upper body and
bc of top-heaviness (higher centre of gravity)
oCephalocaudal sequence - the usual sequence of bodily control, which starts
from the head and works downward
oAnother significant sequence of control goes from the center of the body
outward
oIn keeping with this proximodistal sequence, you may see increasing back
control followed by arm and then hand control
oWhen placed on front or back, baby may discover how to roll over
oBy 6 mths of age, babies can usually put their feet in their mouths and suck
on their toes (flexibility of body)
•Fine motor skills
oPutting things in mouth is more for sensation of touch than taste
Unlock document

Already have an account? Log in
oBig increase in baby’s hand control through 3mth-6mth stage (ability to
perform deliberate actions is increased)
oPalmar grasp - whole hand grasp
oLetting go remains difficult for some babies at this stage
oKnocking things together (one in each hand), passing things from hand to
hand, reaching to grab things (when lying on back), and modifying actions to
fit different things that the baby handles may be features of his or her fine
motor control at 6 mths
2. Cognitive development
•Senses and perception
oAs time goes by, the baby’s ability to differentiate (or distinguish btwn)
sounds increases
oResponses to smells may produce facial expressions similar to those of adults
(facial expressions have been found to be fairly similar across diff cultures
and diff ages and experiences)
oA baby can more easily follow moving objects w her eyes (tracking) and by
turning her head, bc she is able to see a little farther way and has improved
head control (expands access to visual stimulation)
oBaby has binocular vision - gives some sense of spatial dimensions
oAcuity - the degree to which one or more of the senses is functional or
effective
o5-6mths: baby will appear to enjoy looking at contrasting patterns, bright
colours, and particularly at faces
oThe visual connections in the brain which allow for smooth eye tracking are
not present at birth - the ability usually stabilizes by 6 mths (if not stabilized,
visual impairment is permanent)
oEarly stimulation is highly desirable because the brain needs it in order ot
make neurological connections
oTracking - the ability to follow a target that moves on an imagined line in
front of the face from nose to the ear; is not present at birth
oHabituation - the decrease in the response to a stimulus that occurs after
repeated presentations of the stimulus - ie. looking away from a mobile after
continued stimulation
oDishabituation represents an increase in responding to a stimulus because the
stimulus is novel and the child has not yet created a mental representation
oScheme - an organized pattern of sensorimotor functioning; a preliminary
cluster of ideas; early infant ideas
oA decrease in responding to a repeated stimulation (habituation) demonstrates
that the child has formed a mental representation (scheme) of that stimulus
•Mental schemes
oCognitive schemes - a mental map of preliminary concepts connected with
the baby’s firsthand experience (involve neurological activity at a level
beyond previous achievement)
•Sensorimotor behaviour and circular reactions
oSensorimotor stage (Piaget) - where behaviours change from random
movements to more controlled, deliberate actions
oSensorimotor - the first stage of the individual’s cognitive development; this
stage has 6 substages
Unlock document 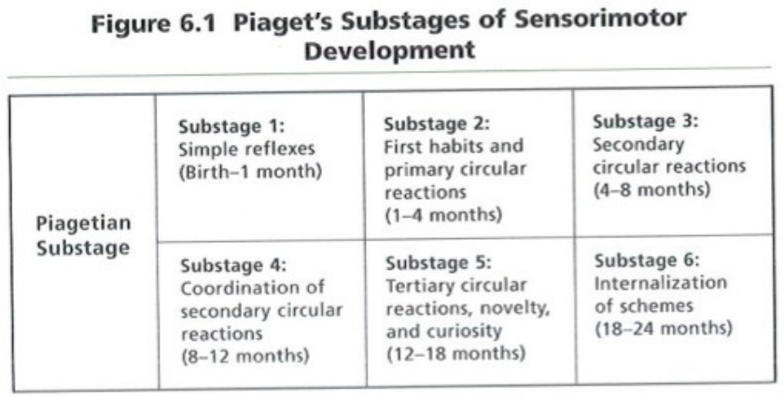 o“Circular” - one action prompts a rxn, which causes the action again
oThe child progresses from one substage to the next substage as he gains
greater gross and fine motor skills and cognitive ability
oPrimary circular reactions - simple repetitive acts resulting from an enjoyable
experience: typically observed at 1-4mths; a substage of sensorimotor activity
oSecondary circular reactions - actions the child repeats as a result of his
becoming interesting in the external results that they produce, typically
observed at 4-8mths; a substage of sensorimotor development
•Concentration span
oThe baby of 3-6mths is particularly interested in new things to look at (visual
preferences continue to be faces, but also interested in patterns of high
contrast)
oBlack and white images are good because they make patterns of high contrast.
Babies also like stripes (contrast btwn brightness) and texture of two surfaces
- indicate where objects begin and end
3. Communication and language
•All 5 sense are usually working effectively at this stage (senses = primary means of
learning and communicating) - sight, touch, and hearing are probably the most
important
•A baby may be able to recognize his or her own name during this stage
•She will begin to understand what is happening to her by associating sounds with
seeing adults do things
•There is comfort in the human voice and patterns of adult conversation even when
they are not understood
•At 3-6mths, the baby will make the same sounds regardless of the lanugage she hears
•There is a big difference btwn a baby’s receptive and expressive language
oReceptive language - hearing and knowing what a sound means
oExpressive language - utterance of meaningful sounds, words, phrases, and
sentences
•How do infants communicate?
oBody language- messages sent either deliberately or unconsciously; conveyed
by the individual’s posture, facial expressions, gestures, and other behaviour
Unlock document