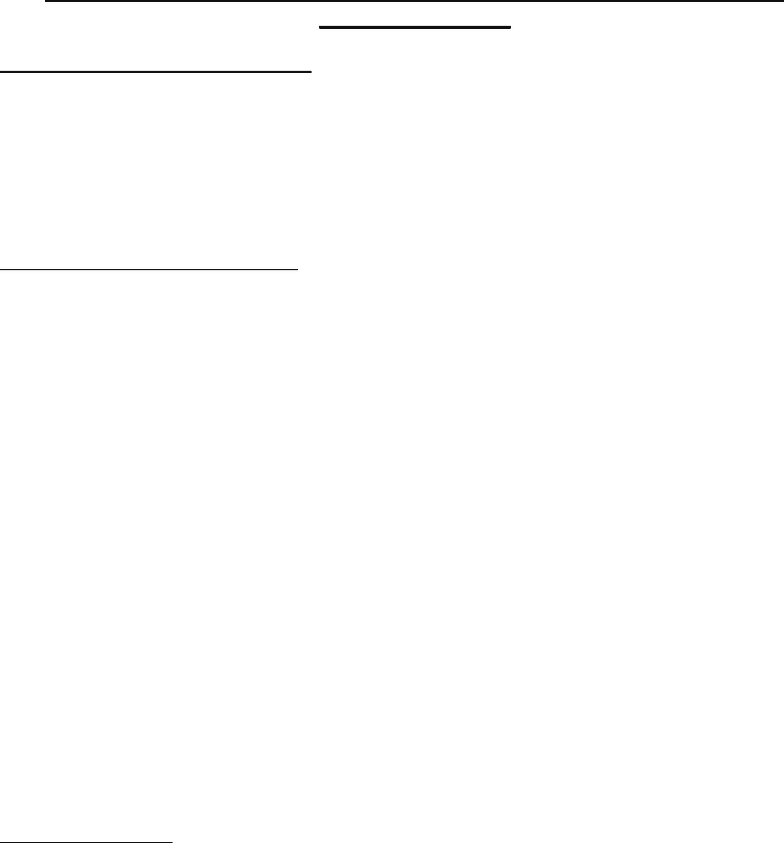 Week 4
Judicial Revolution? Litigation to Reform the Criminal Law – Gerald
Rosenberg, 1991:
The Criminal Rights “Revolution”:
• In a series of cases in the 1960s, the Supreme Court of Canada extended a number of
procedural rights to criminal defendants – there are essentially 4 lines of cases that are
viewed as the pillars of the criminal rights “revolution”:
1. They deal with search and seizure
2. The rights of criminal defendants
3. The rights of juvenile defendants
4. The rights of prison inmates
The Prisoners’ Rights “Revolution”:
• Over the past several decades there has been a great deal of litigation involving the rights of
prison inmates
• Prior to the 1960s, the courts had adopted a hands-off policy to prisoner suits, refusing to
consider the merits of suits challenging prison conditions, rules, and regulations – this
position changed in the early 1960s, when the Court held that section 1983 of the Civil Rights
Act of 1871 gave prisoners standing in federal courts to make such challenges
• By the late 1960s and early 1970s, the Court loosened tight restrictions on prisoners
providing legal assistance to each other, on mail censorship, on freedom of religion, and held
that denial of medical care to an inmate can constitute cruel and unusual punishment in
violation of the Eighth Amendment
• A 1972 case (Haines v. Kerner 1972), allowed a prisoner to proceed with a suit seeking
damages resulting from prison disciplinary regulations, while in 1974 the Court invalidated
prison disciplinary proceedings that did not provide any due process protections (Wolff v.
McDonnell 1974) – in this latter case, Justice White, writing for the majority, noted that “there
is no iron curtain drawn between the Constitution and the prisons of this country”
• At the same time as the Court was liberating prisoners’ access to federal courts, the number
of prisoners skyrocketed – these increases “created a severe crowding problem” that
exacerbated tensions and worsened the already often inadequate delivery of services
• In the wake of these occurrences there was a flood of prisoner suits, nearly all of which
started and ended in the federal district courts – while the first decision invalidating the prison
system of an entire state came in 1970 (Holt v. Sarver), by 1983 prison systems in 8 states
had been declared unconstitutional
• By 1986, 45 states had at least one prison facility involved in litigation and in 37 states
correctional administrations or individual prisons were operating under federal court orders
Changes in Prisons:
• Overall, the consensus view is that, while some changes have been made, serious problems
remain – although litigation has sometimes succeeded in eliminating the “most severe
overcrowding and the most painful and onerous conditions,” the contribution of the courts has
been “strictly limited” to “only” those achievements
• Improvements in prisoner health have been reported, as has the lessening of the likelihood of
“arbitrary abuse”, but prison overcrowding continues to be a serious problem – one study of 4
prison reform cases concluded that while “the court orders eliminated the worst abuses and
ameliorated the harshest conditions,” they failed to deal with “underlying issues and
problems” and “were directed more toward symptoms than causes”
• There are also the issues of prison construction and the expenditure of funds for the
corrections system – here, the essential argument is that courts have put prison reform on
the political agenda and forced states to expand resources to correct constitutionally deficient
conditions
• Finally, there is the issue of prison violence – although court-ordered reform is aimed in
general at improving the treatment of prisoners, and specifically at reducing arbitrary use of
Unlock document

Already have an account? Log in
Week 4
force, there is some evidence suggesting that such reform leads to an increase in prison
violence, at least in the short run
• Additional factors such as “changes in society,” growing prison populations, and younger,
less tractable inmates, have had an effect
• But overall, “while prisoners in many institutions have now enhanced civil rights…they live in
a lawless society at the mercy of aggressive inmates and cliques” – and by 1986, the
“contemporary wisdom in corrections is that despite more than a decade of close scrutiny and
mandated reforms, many prisons were less safe than they were in the pre-reform days”
• In sum, then, it appears that change has been uneven – many of the worst conditions have
been improved to at least minimal standards, but problems still abound; the task that remains
is to explain why the change has been so uneven
Explaining Judicial Outcomes – Constraints and Conditions:
• For change to occur as a result of litigation, reformers must overcome the 3 constraints and
then have present at least 1 of 4 conditions
• With prison reform, courts overcame only one of the constraints entirely – in individual cases,
other constraints were to overcome
• When this occurred, and when one of the conditions was present, meaningful change
occurred – failure to successfully overcome the constraints, or the lack of at least one of the
conditions, meant that court-ordered change was frustrated
• Reformers were able to overcome the problem of lack of precedent – much of the success
here was based on the civil rights litigation of the 1950s and 1960s as well as the reform of
criminal procedure initiated by the Warren Court
• Once attention was drawn to prison conditions, court action followed
• Political and Social Support:
o The second constraint on courts’ ability to produce significant reform is the need for
political support – prison reform issues are “essentially political,” and prison reform is
“highly dependent upon the political process”
o When political leaders are willing to act, this constraint can be overcome – when they
do nothing, or oppose court decisions, little change occurs
o Unless prison officials are pushed by political leaders there is “little incentive” for
them to “take the risks inherent in changing the current structure”
o Political support for prison reform was based on several factors
! “Social acceptance of civil rights for a variety of ‘unconventional’ social
groups” made prison reform an issue that politicians could deal with
! The National Institute of Corrections, a federal agency, “played an
increasingly important role in the prisoners’ rights movement” as did the
American Correctional Association, the leading professional association of
prison officials
o Another important factor in creating political and social support was prison violence –
it is an unfortunate fact of American life that it often takes violence to bring an issue
to political consciousness – the prison reform movement was unquestionably aided
by a series of bloody prison riots and the coming to light of acts of prison violence;
those acts provided the “critical impetus” for reform efforts
• Lack of Implementation Power:
o The third constraint that must be overcome is the courts’ lack of implementation
powers – implementation and enforcement of prison reform decrees rests “primarily
in the hands of prison officials” who, like other professionals, do not like having their
professional competence challenged
o The problem, of course, is not only that prison officials “often continue to fight for the
status quo,” but also that courts lack the tools to insure implementation
o Since prison access is regulated for safety reasons, information on conditions and
the progress of implementation is difficult to obtain – “even under the best of
Unlock document

Week 4
circumstances,” the court “must depend upon the institutions’ staff for information as
to whether a decree is being followed”
o The necessity of support from prison administrators, and their ability to withhold that
support, makes overcoming the implementation constraint particularly problematic
o The “transformation of the patterns of interaction necessary for prison reform cannot
be achieved by decree” – the active support of administrators and staff is required,
and without the presence of factors external to the courts, that support will not be
available
Conditions Necessary for Change:
• Clearly, without political support, neither of the first 2 conditions will be present; it is also clear
that there is no market solution
• However, there is still room for the fourth condition: administrators willing to make changes
who see court decisions as providing cover or a tool for leverage with the legislature and the
executive branch – when this condition is present, and the constraints have been overcome,
change can occur
• Administrators and staff sometimes believe that changes can be made that will improve life
for everyone involved in prisons
• While, in general, adjudication is “unlikely to be effective because the process remains
separate from and foreign to those directly affected,” when administrators and staff are
willingly involved in negotiation, change can occur
• When prison officials are willing to reform, and take part in the remedial process, reform is
more likely
• Examining that litigation, one study suggested that “perhaps in no other state has litigation
been as fundamentally involved in changing prison conditions” – however, the study also
identified factors essential to overcoming the constraints and pointed to the conditions
necessary for change
• Prison violence, the result of 2 inmate guards murdering another prisoner, led to a legislation
of prison conditions and the issuance of a report – a “floodtide of prisoners,” identified as the
“biggest factor operating in corrections in the state,” kept the issue in the political spotlight
• Within the prison system, much change had been made prior to the filing of the suit – the
decline in the profitability of farming made it unattractive for the prison to continue it, and the
cruel and exploitative regime that it had fostered was replaced
• In the early and mid-1960s, whipping had been stopped and vocational education programs
started 0 by the last 1960s additional education programs were added, including alcohol and
drug rehabilitation center, and a pre-release center staffed with counselors
• Reform is also more likely where it is seen as involving either a minor issue or as entailing
“good correctional policy” – this argument is nicely summed up by the Indiana attorney
general’s comparison of the state’s reaction of 2 cases:
1. “The federal judge issued a fairly narrow decree dealing with medical care and
overcrowding. The state felt that he was right – they were going to comply with it as best
the could”
2. Dealing with a reformatory, the judge “issued a very detailed decree telling them how
many medical technicians they had to hire, and so on and so forth – they were going to
fight this one to the end because they didn’t want to be told in detail how to do every
single thing in their prison”
• The courtroom defendants might actually be secret plaintiffs – the assistant attorney general
in charge of corrections for Washington state has noted this too: “sometimes the client wants
to lose, since sometimes losing is the only way a correctional administrator can get the
money he needs to run a proper program”
• For administrators who wish to make changes but see little hope of obtaining the necessary
resources from the legislature, judges may appear as “budgetary saviors” providing the “one
possibility for budgetary growth”
• In terms of using courts as cover, administrators can change rules and then claim that the
changes were forced on them by the courts – for the administrator who is not opposed to at
least some changes, court orders can be used as a tool
Unlock document