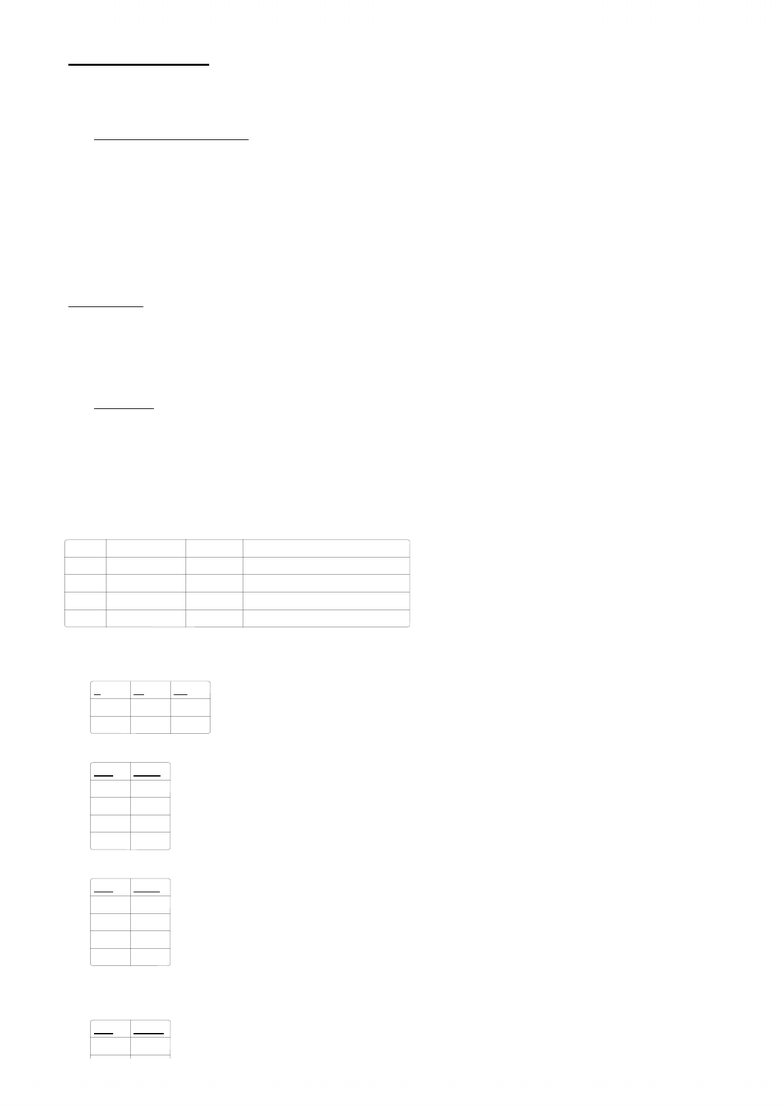 "John likes Mary or Steven" can be broken into "John likes Mary" (OR) "John likes Steven"
○
"John likes Mary and Bill" can be broken into "John likes Mary" (AND) "John likes Bill"
○
The truth of the compound sentence is a function of its parts (hence the phrase "truth-functional" logic")
○
Truth functional compound sentence - sentences that are formed out of other, simpler sentences and whose truth values are related to those simpler sentences.
•
M = def. John likes Mary
B = def. John likes Bill
S = def. John likes Steven
In this chapter, we will use capital letters as abbreviations of sentences:
•
M and B
○
M or S
○
Our original sentences can now be written as:
•
Compound Sentences
Truth Functions
It is true that B
1)
Either B or Eric is tired
2)
B, or B and H
3)
Bill hopes that B
4)
EX:
•
When a variable is repeated, , it must be replaced by the same sentence at each occurrence
•
Truth function - a sentence function that has an additional feature: truth functionality. The truth or falsity of the whole sentence is a function of the truth or
falsity of the sentences replacing the variables in it
•
1 says that "It is true that it is raining", which is true if it is raining and false if it is not.
○
2 says "Either it is raining or Eric is tired". This is not a truth function because if it is raining then the sentence is true but if it not raining the truth of the
sentence is not determined because it depends on whether or not Eric is tired
○
1 and 3 are truth functional because they only contain sentence variables and truth functional words like "and", "or", or "if then".
○
However, 4 is not truth functional because it says "Bill hopes that it is raining" and the truth or falsity of the sentence is entirely a function of what Bill
hopes, and not whether or not it is raining.
○
For example, if B = "It is raining" then:
•
Sentence function - a string of English words and one or more sentence variables. If the sentence variables are replaced by English sentences, the whole string
becomes a sentence in English.
The Five Standard Truth Functions
-Q
Not Q
negation
(it is false that Bill is sad)
Q ^ W
Q and W
conjunction
(Bill is late and Mary is tired)
Q v W
Q or W
disjunction
(Bill is late or Mary is tired)
Q -> W
If Q then W
implication
(if Bill is late then Mary is tired)
Q <-> W
Q if and only if W
equivalence
((Bill is late if and only if Mary is tired)
Truth Tables
Negation
1.
Q
-Q
--Q
T
F
T
F
T
F
Conjunction
2.
Q W
Q ^ W
T T
T
T F
F
F T
F
F F
F
Disjunction
3.
Q W
Q v W
T T
T
T F
T
F T
T
F F
F
Implication
4.
Q W
Q -> W
T T
T
T F
F
Chapter 7 Text Notes
March-26-12
11:50 PM
Ch.7 Text Notes Page 1
Unlock document 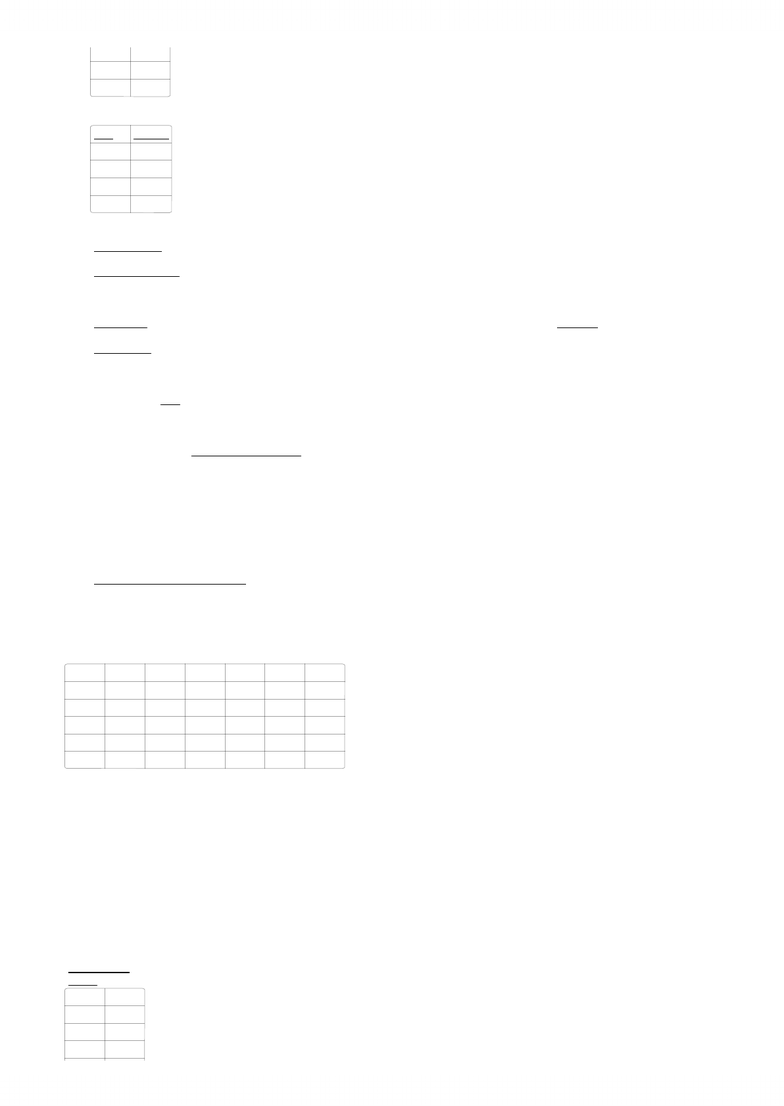 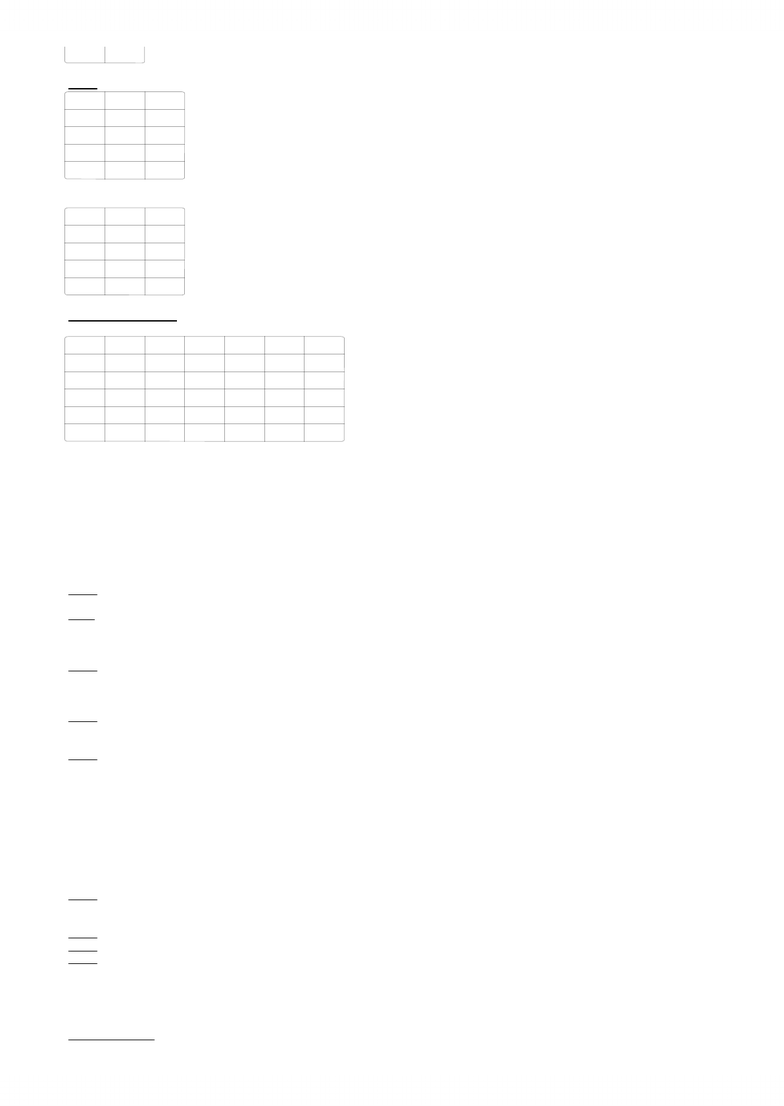