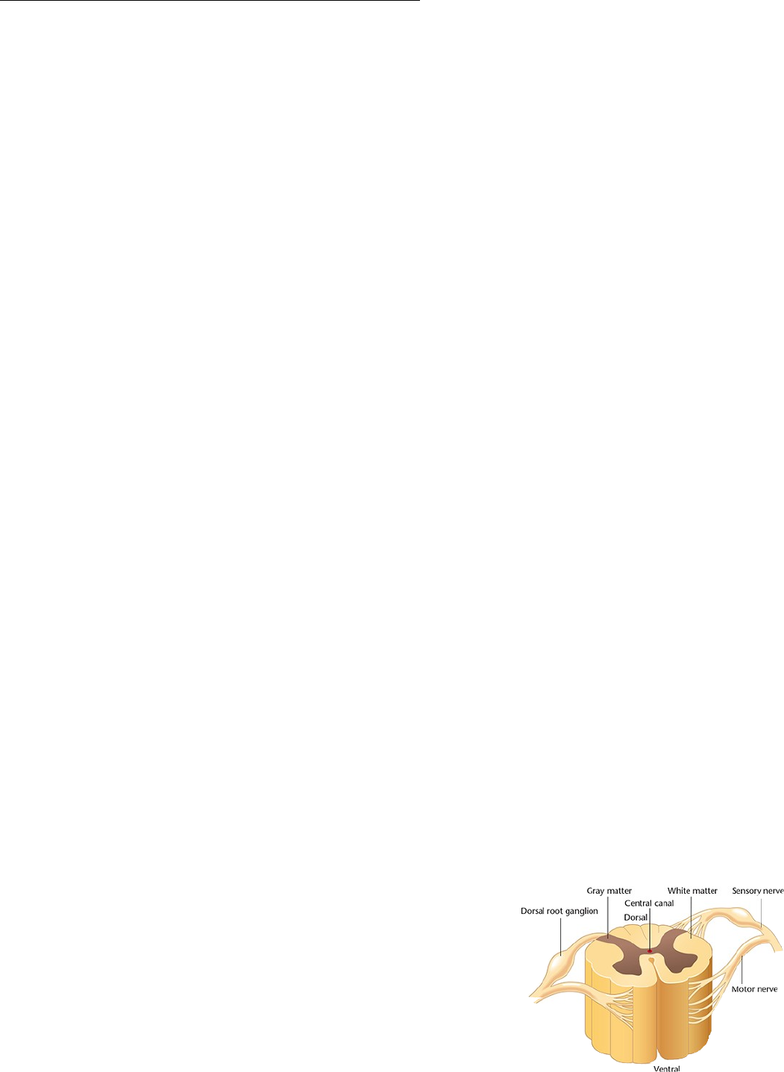 Module 3.1: Structure of the Vertebrate Nervous System
Terms
oCentral Nervous system (CNS) the brain and the spinal cord
oPeripheral nervous system (PNS): nerves outside the brain and spinal cord, connects it to the rest of the
body
•Somatic nervous system is part of the PNS that consists of the axons conveying messages from the
sense organs to the CNS and from the CNS to the muscles
•Autonomic nervous system is part of the PNS that controls the heart, intestines and other organs
•The autonomic nervous system has some of its cell bodies within the brain or spinal cord and some
in clusters along the sides of the spinal cord
oDorsal means toward the back
oVentral means toward the stomach
oWhen humans evolved upright posture, the position of the head changed relative to the spinal cord
oWe still apply the terms dorsal and ventral to the same parts of the human brain as other vertebrate brains
oThe dorsal-ventral axis of the human brain is at a right angle to the dorsal-ventral axis of the spinal cord
oAnterior: toward the front end
oPosterior: toward the rear end
oSuperior: above another part
oInferior: below another part
oLateral: toward the side, away from the midline
oMedial: toward the midline, away from the side
oProximal: located close to the point of origin or attachment
oDistal: located more distant from the point of origin or attachment
oIpsilateral: on the same side of the body
oContralateral: on the opposite side of the body
oCoronal plane (frontal plane): a plane that shows brain structures from the front
oSagittal plane: a plane that shows brain structures as seen from the side
oHorizontal plane (transverse plane): a plane that shows brain structures as seen from above
oLamina: a row or layer of cell bodies separated from other cell bodies by a layer of axons and dendrites
oColumn: a set of cells perpendicular to the surface of the cortex, with similar properties
oTract: a set of axons within the CNS, also known as projection. If axons extend from cell bodies in structure
A to synapses onto B, we say that the fibers "project" from A onto B
oNerve: a set of axons in the periphery, either from the CNS to a muscle or gland or from a sensory organ to
the CNS
oNucleus: a cluster of neuron cell bodies within the CNS
oGanglion: a cluster of neuron cell bodies, usually outside the CNS
oGyrus: a protuberance on the surface of the brain
oSulcus: a fold or groove that separates on gyrus from another
oFissure: a long, deep sulcus
The Spinal Cord
oSpinal cord: part of the CNS; it communicates with all the sense organs and muscles except those of the
head
oOne of the first discoveries about the functions of the nervous system was that the entering dorsal roots
(axon bundles) carry sensory information, and the exiting ventral roots carry motor information
oThe cell bodies of the sensory neurons are in clusters of neurons outside
the spinal cord  dorsal root ganglia
oCell bodies of the motor neurons are inside the spinal cord
oThe dorsal root on each side conveys sensory information to the spinal
cord; the ventral root conveys motor commands to the muscles
oThe H-shaped gray matter in the center of the cord is densely
packed with cell bodies and dendrites.
Unlock document

Already have an account? Log in
oMany neurons from the gray matter of the spinal cord send axons to the brain or to other parts of the spinal
cord through the white matter (area of the nervous system consisting mostly of myelinated axons
The Autonomic Nervous System
oConsists of neurons that receive information from and send commands to the heart, intestines, and other
organs
oTwo parts: sympathetic and parasympathetic nervous systems
oThe sympathetic nervous system is a network of nerves that prepare the organs for vigorous activity,
consists of chains of ganglia just to the left and right of the spinal cord's central regions (the thoracic and
lumbar areas)
•Sympathetic axons prepare the organs for "fight or flight" - increasing breathing and heart rate and
decreasing digestive activity
•Because the sympathetic ganglia are closely linked, they often act as a single system "in sympathy"
with one another, although an event may activate some parts more than others
•Adrenal glands, sweat glands, and hair erector muscles receive sympathetic input only
•Releases norepinephrine
oThe parasympathetic nervous system facilitates vegetative, nonemergency responses by the body's
organs
•Promotes sexual arousal
•Also known as the craniosacral system because t consists of the cranial nerves and nerves from the
sacral spinal cord
•The parasympathetic ganglia are not arranged in a chain near the spinal cord
•Rather, long preganglionic axons extend from the spinal cord to parasympathetic ganglia close to
each internal organ
•Shorter postganglionic fibers then extend from the parasympathetic ganglia into the organs
themselves
•Decreases heart rate and in general conserves energy
•Axons release the neurotransmitter acetylcholine onto the organs
The Hindbrain
oThe brain has 3 divisions - hindbrain, midbrain and the forebrain
oThe hindbrain is the posterior part of the brain, condisits of the medulla, pons and cerebellum
oThe medulla and pons, midbrain and certain central structures of the forebrain constitute the brainstem
oThe medulla or medulla oblongata is just above the spinal cord and can be regarded as an enlarged
extension of the spinal cord into the skull
•It controls vital reflexes through the cranial nerves (nerves that control sensations from the head,
muscle movements in the head and much of the parasympathetic output to the organs)
oEach cranial nerve originates in a nucleus (cluster of neurons) that integrates the sensory information,
regulates the motor output or both
oThe nuclei for cranial nerves V through XII are in the medulla and pons
oCranial nerves I through IV are in the midbrain and forebrain
oThe pons: hindbrain structure that lies anterior and ventral to the medulla
oThe cerebellum: highly folded hindbrain structure that is important for behaviours that depend on accurate
timing
•Known for its contributions to the control of movement
•People with damage to the cerebellum have trouble shifting their attention back and forth between
auditory and visual stimuli
•They have difficulty with timing such as judging whether one rhythm is faster than another
The Midbrain
oMidbrain: middle part of the brain
oThe roof of the midbrain  tectum
oThe swellings on each side of the tectum are the superior colliculs (important to visual processing) and the
inferior colliculus (contributes to hearing)
oUnder the tectum lies the tegmentum the intermediate level of the midbrain
Unlock document

Already have an account? Log in
oThe tectum covers the tegmentum, but the tegmentum covers several other midbrain structures
oThe substantia nigra gives rise to a dopamine-containing pathway that facilitates readiness for movement
The Forebrain
oThe forebrain is the most anterior part of the brain; consists of two cerebral hemispheres
oEach hemisphere is organized to receive sensory information, mostly from the opposite side of the body,
and to control mostly, mostly on the opposite side, by way of axons to the spinal cord and the cranial nerve
nuclei
oThe outer portion is the cerebral cortex
oUnder the cerebral cortex are other structures including the thalamus and the basal ganglia
oLimbic system: interlinked structures that form a border around the brainstem
•Important for motivations and emotions, such as eating, drinking, sexual activity, anxiety and
aggression
•Includes the olfactory bulb, hypothalamus, hippocampus, amygdala, and cingulate gyrus of the
cerebral cortex
Thalamus
oThe thalamus and hypothalamus form the diencephalon, a section distinct from the telencephalon, which s
the rest of the forebrain
oThe thalamus is a pair of structures in the center of the forebrain
oMost sensory information goes first to the thalamus which process it and send output to the cerebral cortex
oAn exception is olfactory information, which progresses form the olfactory receptors to the olfactory bulbs
and then directly to the cerebral cortex
oThe cerebral cortex send information back to the thalamus, prolonging and magnifying certain kinds of input
and focusing attention of particular stimuli
Hypothalamus
oHypothalamus is a small area near the base of the brain, ventral to the thalamus
oContains a number of distinct nuclei
oConveys messages to the pituitary gland, altering its release of hormones
oDamage leads to abnormalities in motivated behaviors, such as feeding, drinking, temperature regulation,
sexual behavior, fighting or activity level
Pituitary Gland
oIs an endocrine gland attached to the base of the hypothalamus by a stalk that contains neurons, blood
vessels, and connective tissue
oThe pituitary synthesizes hormones that the blood carries to organs throughout the body
Basal Ganglia
oIs a group of subcortical forebrain structures lateral to the thalamus
oThree major structures:
•Caudate nucleus
•Putamen
•Globus pallidus
oDamage to the basal ganglia impairs movement, as in conditions such as Parkinson's and Huntington's
disease
oIntegrates motivational and emotional behavior to increase the vigor of selected actions
oAlso critical for learning and remembering skills and habits, as well as other types of learning that develop
gradually with extended experience
Basal Forebrain
oThe nucleus basalis is a forebrain structure that lies on the ventral surface; receives input from the
hypothalamus and basal ganglia; sends axons to areas in the cerebral cortex
oIs a key part of the brains system for arousal, wakefulness, and attention
oPatients with Parkinson's and Alzheimer's have impairments of attention and intellect because of inactivity or
deterioration of their nucleus basalis
Unlock document