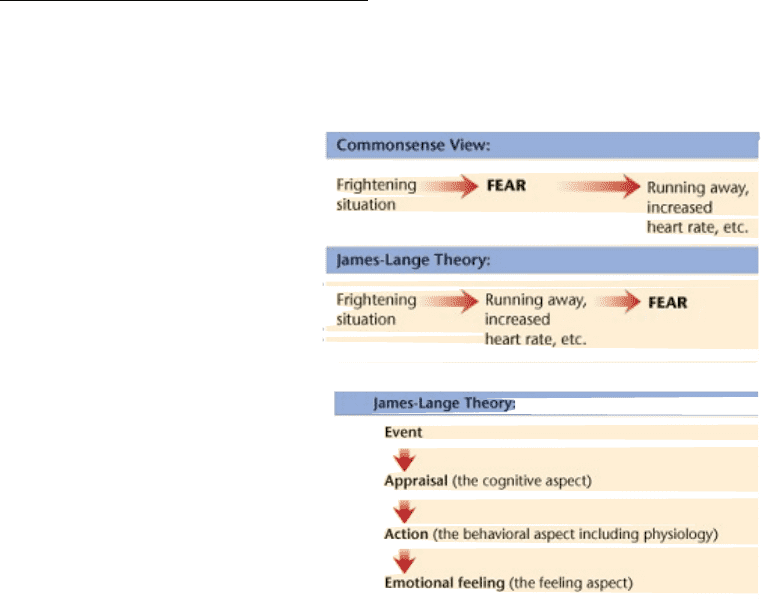 Module 11.1 - What is Emotion?
oEmotion includes "cognitive evaluations, subjective changes, autonomic and neural arousal, and impulses to action"
oEmotional situations arouse the two branches of the autonomic nervous system - the sympathetic/parasympathetic
oMost situations evoke a combination of sympathetic and parasympathetic arousal
•E.g. nausea is associated with sympathetic stimulation of the stomach (decreasing its contractions and
secretions)
•parasympathetic stimulation of the intestines and salivary
glands
oJames-Lange theory: proposal that an event first provokes the
autonomic arousal and skeletal responses and that the feeling aspect
of emotion is the perception of those responses
•What you experience as an emotion is the label you give to
your response
•You feel afraid because you run away
•You feel angry because you attack
•Arousal and actions lead to emotions, they lead to the feeling
aspect of an emotion
•Two predictions: people with weak autonomic or skeletal responses
should feel less emotion, and causing or increasing someone's
responses should enhance an emotion
Is Physiological Arousal Necessary for Emotional Feelings?
oPure autonomic failure: condition when output from the autonomic
nervous system to the body fails
•Patients do not react to stressful experiences with changes in heart rate, blood pressure, or sweating
•According to James-Lange theory, we would expect to report no emotions
•In reality, they report having the same emotions as anyone else, and they have little difficulty identifying
what emotion a character in a story would probably experience
•They feel their emotions much less intensely than before
•They report that they experience emotions, the cognitive aspect of it
•E.g. botulinum toxin (botox) blocks transmission at synapses and nerve-muscle junctions
Paralyze all the facial muscles, reported weaker than usual emotional responses when they
watched short videos
Feeling a body change is important for feeling an emotion
oPeople with damage to the right somatosensory cortex have normal autonomic responses to emotional music but
report little experience
oPeople with damage to part of the prefrontal cortex have weak autonomic responses but normal subjective
responses
Is Physiological Arousal Sufficient for Emotions?
oPanic attack: period marked by extreme sympathetic nervous system arousal
oForcing a smile  rate cartoons funnier
oForcing a smile decreased a stressful experience, as measured by changes in heart rate
oAlthough facial expressions slightly alter emotions, smiles are not necessary for happiness
oMobius syndrome - cannot move their facial muscles to make a smile
•they nevertheless experience happiness and amusement
•this syndrome often interferes with the ability to make friends because people react to the lack of smiling
Is Emotion a Useful Concept?
oThe limbic system: the forebrain areas surrounding the thalamus- has been regarded as critical for emotion
oThe variability of locations for each emotion depend more on the details of the procedure than on which emotion
was targeted
oNo type of emotion consistently activates one brain area, and no brain area is associated with one emotion
Do People Have a Limited Number of Basic Emotions?
Unlock document

oToday, emotions remain as virtually the only area in which many researchers still hope to identify elements of
experience, to list a few "basic" emotions
oWe identify emotions by context and gestures
oTone of voice carries an enormous amount of emotional information
oAn alternative view is that emotional feelings vary along two or more continuous dimensions, such as weak versus
strong, pleasant versus unpleasant, or approach versus avoid
oBehavioural activation system (BAS): left brain hemispheric activity (especially frontal and temporal lobes)
marked by low to moderate autonomic arousal and a tendency to approach, which could characterize either
happiness or anger
oBehavioural inhibition system (BIS): right brain hemispheric activity, which increases attention and arousal,
inhibits action, and stimulates emotions such as fear and disgust
oExperiment: view pictures flashed on one side or the other of the visual field to prime one hemisphere or the other
to process information
•People were quicker and more accurate at identifying happy faces when the information went to the left
hemisphere
•They had an advantage in processing sad or frightened information when the information went to the right
hemisphere
•Results support an association between left hemisphere and approach, and between the right
hemisphere and inhibition of action
The Functions of Emotion
oFor certain emotions, the answer is clear: fear alerts us to escape from danger
oEmotional expressions help us communicate our needs to others and understand other people's needs and
probable actions
oEmotions provide a useful guide when we need to make a quick decision
Emotions and Moral Decisions
oDilemmas example: would you divert a runaway train so it kills one person instead of five?
•Hospital dilemma - you are a surgeon and five of your patients will dies soon unless they get organ
transplants
•Each needs the transplant of a different organ
•A visitor has arrived and has exactly the same tissue type as all five of your patients
•Do you kill him to save the five others?
oalmost no one endorses killing one person to save five others in the hospital dilemma
opeople with the strongest autonomic arousal are the least likely to make the "logical" decision to kill one and save
five others
owhen we are making a decision about right and wrong, we seldom work it out rationally
oone decision or the other just "feels" right
oafter we have already decided, we try to think of a logical justification
Decision Making after Brain Damage that Impairs Emotions
odamage to parts of the prefrontal cortex blunts people's emotions in most regards, except for an occasional
outburst of anger
opeople with such damage often make impulsive decisions without pausing to consider the consequences,
including how they will feel after a possible mistake
oafter damage to a particular part of the prefrontal cortex - the ventromedial prefrontal cortex- people show
inconsistent preferences, as if they aren't sure what they want or like
ofailure to anticipate the unpleasantness of likely outcomes leads to bad decisions
opeople with damage to the ventromedial prefrontal cortex show inconsistent preferences, as if they are unsure
what they want or like. They also show little concern for people and lack a normal sense of guilt
Module 11.2 - Attack and Escape Behaviours
Attack Behaviours
oattack behaviour depends on the individual as well as the situation
othe amygdala, located in the interior of the temporal lobe, receives input from many cortical and subcortical areas
owhen one person annoys you and a few minutes later you get angry with someone else
Unlock document

Already have an account? Log in
olying on your back can decrease anger; research has shown that it is easier to feel angry while standing (in
position to attack)
oemotion is embodied: what you are doing affects how you feel
Effects of Hormones
omale aggressive behavior depends heavily on testosterone
otestosterone increases are linked with increased striving for social dominance
otestosterone facilitates aggression, whereas cortisol (associated with fear and anxiety) inhibits aggression
oaggression depends on the ratio of testosterone to cortisol, not testosterone alone
oserotonin also tends to inhibit violent impulses, so impulsive aggression is highest when testosterone levels are
high, and both cortisol and serotonin are low
Serotonin Synapses and Aggressive Behaviour
oevidence link impulsiveness and aggressive behavior to low serotonin release
owhen neurons release serotonin, they reabsorb most of it and synthesize enough to replace the amount that
washed away
othe amount present in neurons remains fairly constant, but if we measure the serotonin metabolites in body fluids,
we gauge the turnover
oturnover: release and resynthesis of a neurotransmitter
oresearchers measure serotonin turnover by the concentration of 5-hydroxyindoleacetic acid (5-HIAA):
serotonin's main metabolite in the CSF
Heredity and Environment in Violence
opeople with lower than average autonomic arousal tend, on average, to be more aggressive, probably because
they react less strongly to fear of the consequences
othe enzyme monoamine oxidase A
•after a neuron releases serotonin, dopamine, or norepinephrine, most of it returns to the neuron via
reuptake
•at that point the enzyme breaks down some of it, preventing possible accumulation of an excessive
amount
•people vary in their genes for the enzyme, as some people have a less-active form of the gene
•the effect of the gene depends on prior experience
Fear and Anxiety
oRole of the Amygdala
•Moro reflex: newborn reacts by arching the back, briefly extend the arms and legs, and cry
•Startle reflex: response that one makes after a sudden, unexpected loud noise or similar sudden
stimulus
•Auditory information goes first to the cochlear nucleus in the medulla and from there directly to an area in
the ponds that commands tensing the muscles, especially the neck muscles
•Tensing the neck muscles is important because the neck is so vulnerable to injury
•your startle reflex is more vigorous if you are already tense
•people with post-traumatic stress disorder, certainly known for their intense anxiety, show an enhanced
startle reflex
oStudies of Rodents
•Animals learned to associate a stimulus with shock, that stimulus becomes a fear signal, and presenting
the fear signal just before a sudden loud noise enhances the startle response
•A stimulus previously associated with pleasant stimuli or the absence of danger becomes a safety signal
that decreases the startle reflex
•The amygdala is important for enhancing the startle reflex
•Many cells in the amygdala get input from pain fibers as well as vision or hearing
•One path through he amygdala is responsible for fear of pain, another for fear of predators, and another
for fear of aggressive members of your own species
•The central amygdala receives sensory input from the lateral and basolateral amygdala
It sends output to the central gray area of the midbrain, which relays information to a nucleus in
the pons responsible for the startle reflex
Unlock document