Topic 1 – Itrodutio to ell iolog ad the ell’s features
Heredity – the parent organism hands down information specifying the characteristics that the offspring
will have. This is a central part of the definition of life: it distinguishes life from other processes.
Most living organisms are single cells; others, like us, are multicellular. But in both cases, the whole
organism has been generated by cell divisions from a single cell. The single cell, therefore, is the vehicle
for the hereditary information that defines the species. Specified by this information, the cell has the
capability to gather raw materials from the environment, and to construct out of them a new cell in its
own image, complete with a new copy of the hereditary information – nothing less than a cell has this
capability!
All living cells on earth store their hereditary information in the form of double-stranded molecules of
DNA – long unbranched paired polymer chains, formed always of the same four types of monomers – A,
T, C, G. These monomers are strung together in a long linear sequence that encodes the genetic
information.
Each monomer (nucleotide) in a DNA strand consists of two parts:
• a sugar (deoxyribose) with a phosphate group attached to it,
• and a base, which may be either adenine, guanine, cytosine, or thymine.
• Each sugar is linked to the next via the phosphate group, creating a polymer chain composed of a
repetitive sugar-phosphate backbone with a series of bases protruding from it.
• The DNA polymer is extended by adding monomers at one end
For a single isolated strand, these can, in principle, be added in any order, because each one links to the
next in the same way, through the part of the molecule is the same for all of them.
In the living cell, however, there is a constraint: DNA is not synthesized as a free strand in isolation, but on
a template formed by a pre-existing DNA strand. The bases protruding from the existing strand bind to
bases of the strand being synthesized, according to a strict rule defined by the complementary structures
of the bases: A binds to T, and C binds to G. This base-pairing holds fresh monomers in place and thereby
controls the selection of which one of the four monomers shall be added to the growing strand next.
In this way, a double-stranded structure is created, consisting of two exactly complementary sequences
of As, Cs, Ts, and Gs. The two strands twist around each other, forming a double helix.
The bonds between the base pairs are WEAK compared to the sugar-phosphate links, and this allows the
two DNA strands to be pulled apart without breakage of their backbones.
This process of DNA replication occurs at different rates in different types of cells, with different controls
to start it or stop it, and different auxiliary molecules to help it along. But the basics are universal: DNA is
the information store, and template polymerization is the way in which this information is copied
throughout the living world.
To carry out its information-storage function, DNA must also express its information, putting it to use so
as to guide the synthesis of other molecules in the cell. This also occurs by a mechanism that is the same
in all living organisms, leading first and foremost to the production of two other key classes of polymers:
RNAs and proteins.
find more resources at oneclass.com
find more resources at oneclass.com
Unlock document

The process begins with a template polymerization called transcription, in which segments of the DNA
sequence are used as templates to guide the synthesis of shorter molecules of the closely related
polymer ribonucleic acid, or RNA.
In RNA,
• the backbone is formed of a slightly different sugar from that of DNA – ribose instead of
deoxyribose,
• and one of the four bases is slightly different – uracil (U) in place of thymine (T),
• but the other three bases (A, C, and G) are the same, and all four bases pair with their
complementary counterparts in DNA.
During transcription, RNA monomers are lined up and selected for polymerization on a template strand of
DNA in the same way that DNA monomers are selected during replication. The outcome is therefore a
polymer molecule whose sequence of nucleotides represets a part of the ell’s geeti iforatio,
consisting of RNA monomers instead of DNA monomers.
The same segment of DNA can be used repeatedly to guide the synthesis of many identical RNA
trasripts. This, hereas the ell’s arhie of geeti iforation in the form of DNA is fixed, the RNA
transcripts are mass-produced and disposable.
The primary role of most of these transcripts is to serve as intermediates in the transfer of genetic
information: they serve as messenger RNA (mRNA) to guide the synthesis of proteins according to the
genetic instructions stored in the DNA.
RNA molecules have distinctive structures that can also give them other specialized chemical capabilities.
Being single-stranded, their backbone is flexible, so that the polymer chain can bend back on itself to
allow one part of the molecule to form weak bonds with another part of the same molecule. This occurs
when segments of the sequence are locally complementary. These types of internal association can cause
RNA chain to fold up into a specific shape that is dictated by its sequence.
The shape of the RNA molecule, in turn, may enable it to recognize other molecules by binding to them
selectively – and even, in certain cases, to catalyze chemical changes in the molecules that are bound.
Protein molecules, like DNA and RNA, are long unbranched polymer chains, formed by the stringing
together of monomeric building blocks drawn from a standard repertoire that is the same for all living
cells. Like DNA and RNA, they carry information in the form of a linear sequence of symbols, in the same
way as a human message written in an alphabetic script. Protein molecules are highly present in each cell,
ad the for ost of the ell’s ass eludig ater.
The monomers of protein, the amino acids, are quite different from those of DNA and RNA, and there are
20 types, instead of 4. Each amino acid is built around the same core structure though which it can be
linked in a standard way to any other amino acid in the set; attached to this core is a side group that gives
each amino acid a distinctive chemical character.
Each of the polypeptides created by joining amino acids in a particular sequence folds into a precise
three-dimensional form with reactive sites on its surface. These amino acid polymers thereby bind with
find more resources at oneclass.com
find more resources at oneclass.com
Unlock document 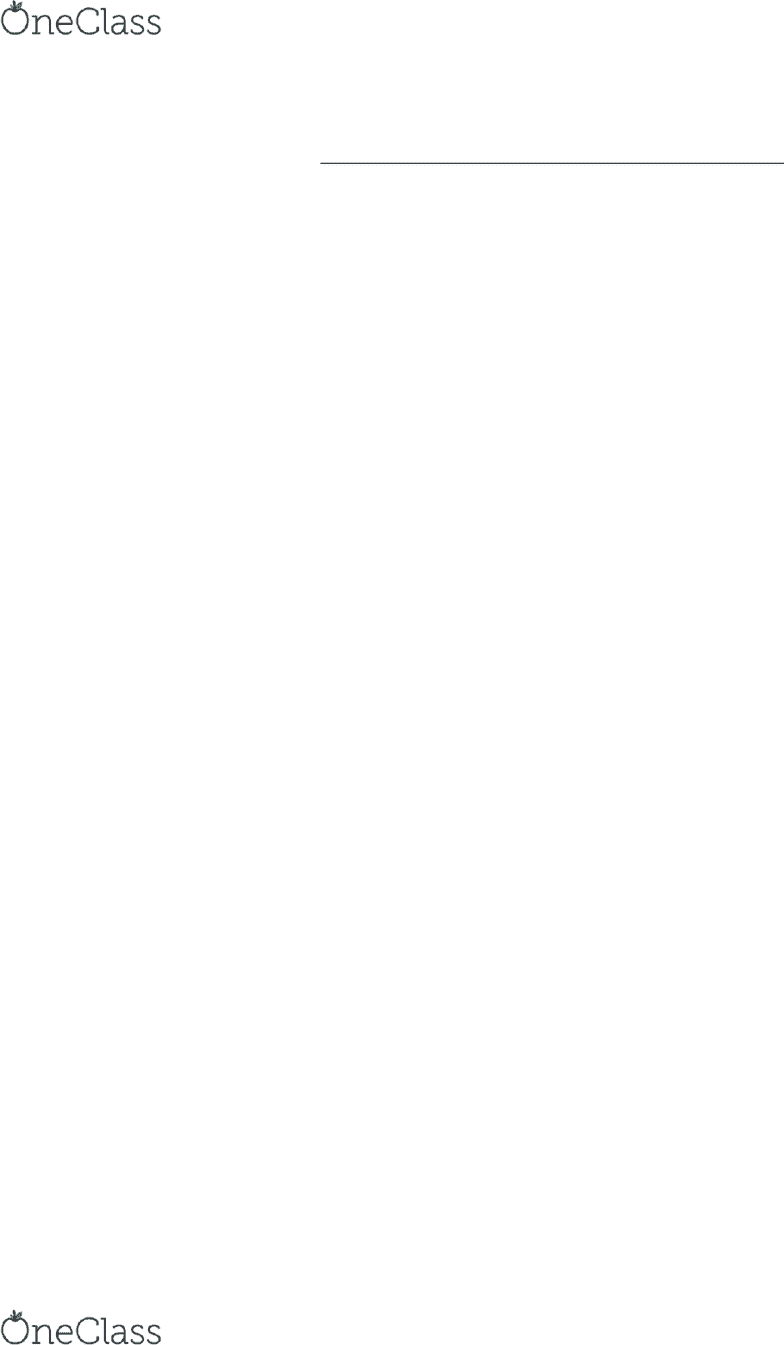 high specificity to other molecules and act as enzymes to catalyze reactions in which covalent bonds are
made and broken. In this way they direct the vast majority of chemical processes in the cell.
Proteins have a bunch of other functions as well – maintaining structures, generating movements,
sensing signals, and so on – each protein molecule performing a specific function according to its own
genetically specified sequence of amino acids. Proteins, above all, are the moleules that put the ell’s
genetic information into action.
The translation of genetic information from the 4-letter alphabet of polynucleotides into the 20-letter
alphabet of proteins is a complex process. The information in the sequence of an mRNA molecule is read
out in groups of three nucleotides at a time: each triplet of nucleotides, or codon, specifies (codes for) a
single amino acid in a corresponding protein.
➢ Since there are 64 possible codons, but only 20 amino acids, there are necessarily many cases in
which several codons correspond to the same amino acid.
The code is read out by a special class of small RNA molecules, the transfer RNAs (tRNAs). Each type of
tRNA becomes attached at one end to a specific amino acid, and displays at its other end a specific
sequence of three nucleotides – and anticodon – that enables it to recognize, through base-pairing, a
particular codon or subset of codons in mRNA.
For synthesis of protein, a succession of tRNA molecules charged with their appropriate amino acids have
to be brought together with an mRNA molecule and matched up by base-pairing through their anticodons
with each of its successive codons. The amino acids then have to be linked together to extend the
growing protein chain, and the tRNAs have to be released.
➢ This whole complex of processes is carried out by a giant multimolecular machine, the ribosome,
formed of two main chains of RNA (called ribosomal RNAs, rRNAs), and more than 50 different
proteins.
➢ This molecule latches onto the end of an mRNA molecule and then trundles along it, capturing
loaded tRNA molecules and stitching together the amino acids they carry to form a new protein
chain.
DNA molecules are very large, so segments of the entire DNA sequence are therefore transcribed into
separate mRNA molecules, with each segment coding for a different protein. A gene is defined as the
segment of DNA sequence corresponding to a single protein (or to to a single catalytic or structural RNA
molecule for those genes that produce RNA but not protein).
In all cells, the expression of individual genes is regulated: instead of manufacturing its full repertoire of
possible proteins at full tilt all the time, the cell adjusts the rate of transcription and translation of
different genes independently, according to need.
Stretches of regulatory DNA are interspersed among the segments that code for protein, and these
noncoding regions bind to special protein molecules that control the local rate of transcription. Other
noncoding DNA is also present, some of it serving, for example, as punctuation, defining where the
information for an individual protein begins and ends. The quantity and organization of the regulatory
and other noncoding DNA vary widely from one class of organisms to another, but the basic strategy is
universal. In this way, the genome of the cell – that is, the total of its genetic information as embodied in
its complete DNA sequence – ditates ot ol the ature of the ell’s proteis, ut also he ad here
they are to be made.
find more resources at oneclass.com
find more resources at oneclass.com
Unlock document