CHAPTER 10 Motivation and Emotion
- Motivation relates to the study of the processes involved in goal-directed behaviour
which is often associated with specific emotions
- Motivation and emotion are often linked
- Motives are the needs, wants, interests and desires that propel people in certain
directions, propel us to achieve important goals.
Motivational Theories and Concepts
Drive Theories
- View motivational forces in terms of drives
- Drive theories apply the concept of homeostasis: a state of physiological equilibrium or
stability, to behaviour.
- Drive: an internal state of tension that motivates an organism to engage in activities that
should reduce this tension
- According to this theory, when individuals experiences a drive, they are motivated to
pursue actions that will lead to drive reduction
- Drive theories cannot explain all motivation. Homeostasis appears irrelevant to some
human motives (eating when you are not hungry)
Incentive Theories
- Propose that external stimuli regulate motivational states
- Incentive: is an external goal that has the capacity to motivate behaviour (ice cream,
approval from friends, an A on an exam are all incentives). Some incentives may reduce
drives, but other may not.
- Drive theories emphasize how internal states of tension push people in certain directions.
The source of motivation lies within the organism
- Incentive theories emphasize how external stimuli pull people in certain directions. The
source of motivation lies outside the organism, in the environment.
- Incentive models do not operate according to the principle of homeostasis. Incentive
theories emphasize environmental factors and downplay the biological bases of human
motivation
- Expectancy-value models of motivation are incentive theories that take into account the
fact that people can’t always obtain their goals. According to this model, one’s
motivation depend on two factors:
o Expectancy about one’s chances of attaining the incentive
o The value of the desired incentive
- Your motivation to pursue something will depend of your likelihood to get it
(expectancy) and how appealing it is to you (value)
Evolutionary Theories
- Take an evolutionary perspective that human motives are the products of evolution
- Argue that natural selection favours behaviours that maximize reproductive success-
passing on genes to the next generation
- Motives such as dominance, aggression and sex drive can be explained in terms of their
adaptive value
- Believe that motives can best be understood in terms of the adaptive problems they
solved for our hunter ancestors 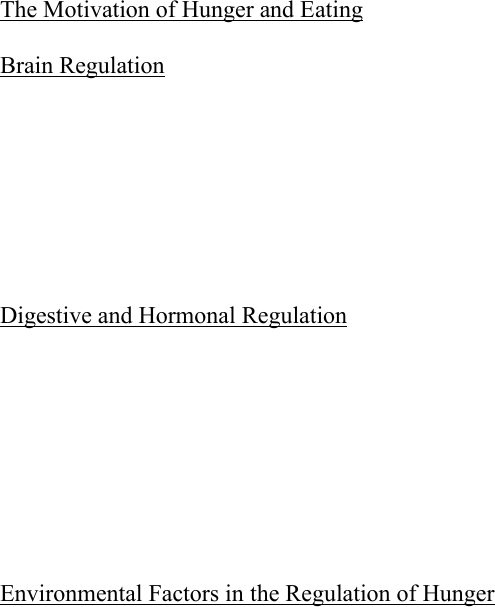 - Need for dominance is greater in males than females because it facilitates males’
reproductive success in many ways:
o Females may prefer mating with dominant males
o Dominant males can steal females from subordinate males
o Dominant males can intimidate rivals in competition for sexual access
o Dominant males can acquire more material resources, increasing mating
opportunities
The Motivation of Hunger and Eating
- Hunger is deceptive and is a complex motivational system
Brain Regulation
- Research suggested that experience of hunger is controlled in the brain- specifically in
the hypothalamus
- Hypothalamus is involved in the regulation of a variety of biological needs related to
survival
- The lateral hypothalamus (LH) and the ventromedial nucleus of the hypothalamus
(VMH) are elements in the neural circuitry that regulates hunger
- Arcuate nucleus (contains a group of neurons that are sensitive to incoming hunger
signals) and the paraventricular nucleus plays a larger role in the modulation of hunger
Digestive and Hormonal Regulation
- After consuming food, the stomach can send a variety of signals to the brain that inhibit
further eating (vagus nerve tells the stomach its full when the stomach wall stretches)
- When the stomach is empty it secretes the hormone ghrelin to promote hunger and when
it is full, it secretes CCK reducing hunger
- The hormone leptin contributes to the long-term regulation of hunger. It is produced by
fat cells and released into the bloodstream. It provides the hypothalamus with information
about the body’s fat stores
- Hormonal signals that influence hunger are insulin, ghrelin, CCK, and leptin all converge
in the hypothalamus
Environmental Factors in the Regulation of Hunger
- Three environmental factors are:
o The availability of food
o Learned preferences and habits
o Stress
Food Availability and Related Cues
- Hunger operates as a drive system in which homeostatic mechanisms are at work
- It is also argued that humans and animals are often motivated to eat not by the need to
gain energy but by the pleasure of eating. Some variables to support this perspective are:
o Palatability: the better the taste of the food, the more people consume it
o Quantity available: the more that is served, the more which is consumed (the
larger the bowl, the more cereal you will put in it)
o Variety: consumption is increased when a greater variety of foods is available. If
the same foods are served, the appeal decreases.
o Presence of others: the more people present; the more people tend to eat (girls eat
less around guys and more around their friends)

o Stress: makes some eat less and some eat more. It fosters a shift towards less
healthy food choices (sweets, fatty foods)
- Hunger can also by aroused by exposure to environmental cues (ads)
- Social cues based on the behaviour of others are important determinants of food intake
Learned Preferences and Habits
- Preferences are acquired through learning but, humans do have some innate taste
preferences of a general sort (preference for sweets)
- Taste preferences are partly a function of learned associations formed through classical
conditioning
- People tend to prefer familiar foods and are limited to food exposure
Eating and Weight: The Roots of Obesity
- Obesity: the condition of being overweight and is mostly assessed in terms of body mass
index (BMI). BMI is 25.0-29.9 is seen as overweight and, BMI over 30 is considered
obese
- There is a plausible explanation for the dramatic increase in obesity. Over the course of
history, most humans lived in environments which involved competition for limited
amount of food. So, they evolved to consume more food than necessary in the moment
because it might not be available late. Fat was stored in the body to prepare for future
food shortages. However, in today’s society humans live in an environment that has
abundant supply of food. So, when people overeat, it leads to obesity
- Obesity results in more health problems such as coronary disease, muscle pain,
hypertension, diabetes and more
Genetic Predisposition
- Research suggests that obesity is partly a matter of hereditary influence and that some
people inherit a genetic vulnerability to obesity
Excessive Eating and Inadequate Exercise
- The truth for overweight people is that they eat too much in relation to their level of
exercise
- Canadian kids are spending the majority of their waking hours being sedentary. Along
with obesity, physical inactivity can lead to long-term health problems
The Concept of Set Point
- People who go on a diet and lose weight have a strong tendency to gain back all the gain
they lost, suggesting homeostatic mechanisms defend against weight loss
- Metabolic and neuroendocrine processes work to resist weight loss
- The human body is also wired to resists weight gain. Those who work to put weight on
often have trouble keeping it.
- Set-point theory proposes that the body monitors fat-cell levels to keep them (and
weight) fairly stable. The set point is each individual’s natural point of stability for
weight
- The physiological processes that defend against weight loss are much stronger than those
that defend against weight gain due to our ancestral environments. When food was
limited, defending against weight loss would have been more adaptive for survival than
weight gain
Dietary Restraint
- According to their theory, chronic dieters are restrained eaters: people who consciously
work overtime to control their eating impulses and who feel guilty when they fail