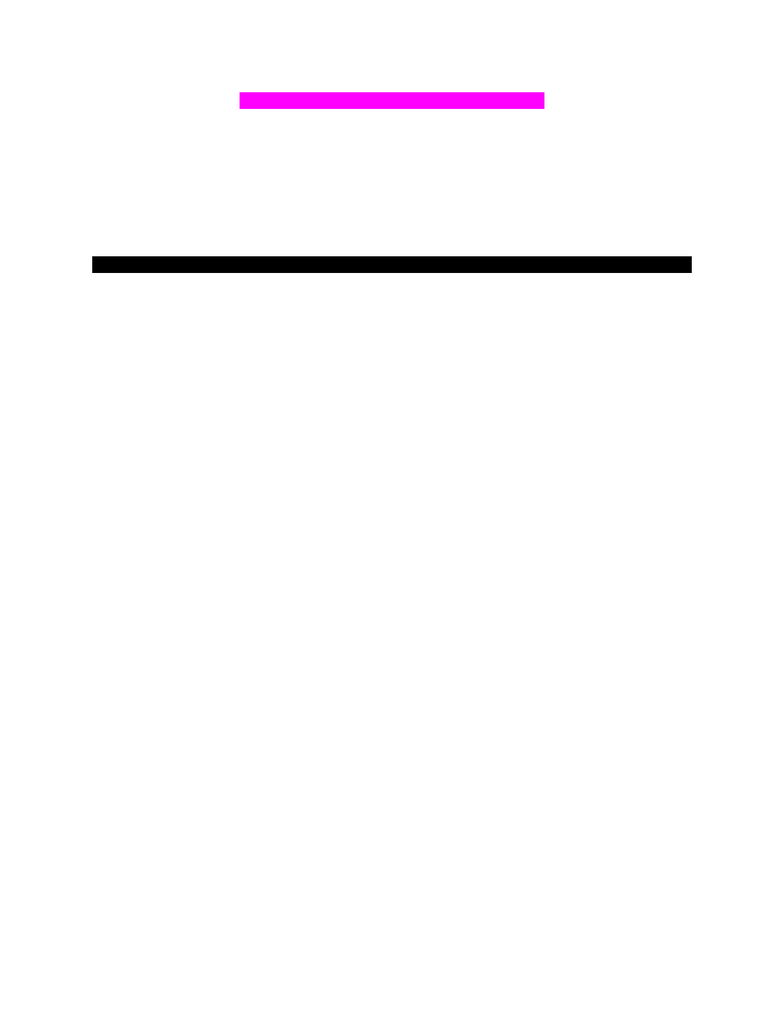 Chapter 15: Treatment of Psychological Disorders
Introduction
•Contemporary treatments of psychological disorders are varied and reflect a distinct set of theory
about human functioning
•Last 50 years has seen significant advances in development and scientific evaluation of
treatments for psychological disorders
•History of treatment for psychological disorders also has had its controversial side
•As ideas regarding nature of psychological disorders have changed, so have approached to
treatment
The Elements of the Treatment Process
•Sigmund Freud is often credited with launching modern psychotherapy
•Breuer began to treat a young woman referred to as Anna O
•Anna exhibited variety of physical maladies, including headaches, coughing and a loss of feeling
in and movement of her right arm
•Breuer discovered that Anna’s physical symptoms cleared up when he encouraged her to talk
about emotionally charged experiences from her past
•Freud and Breuer speculated that talking things through had enabled Anna to drain off bottled up
emotions that had caused her symptoms
•Freud applied Breuer’s insight to the patients and his successes led him to develop a systematic
treatment procedure which he called psychoanalysis
•Psychotherapy isn’t always curative, and many modern treatments place little emphasis on
talking
Treatments: How many types are there?
•Include discussion, advice, emotional support, persuasion, conditioning procedures, relaxation
training, role playing, drug therapy, biofeedback and group therapy
•No one knows exactly how many distinct types of psychotherapy there are
•May be over 400 approaches to treatment
•Approaches to treatment can be classified into 3 major categories:
www.notesolution.com
Unlock document 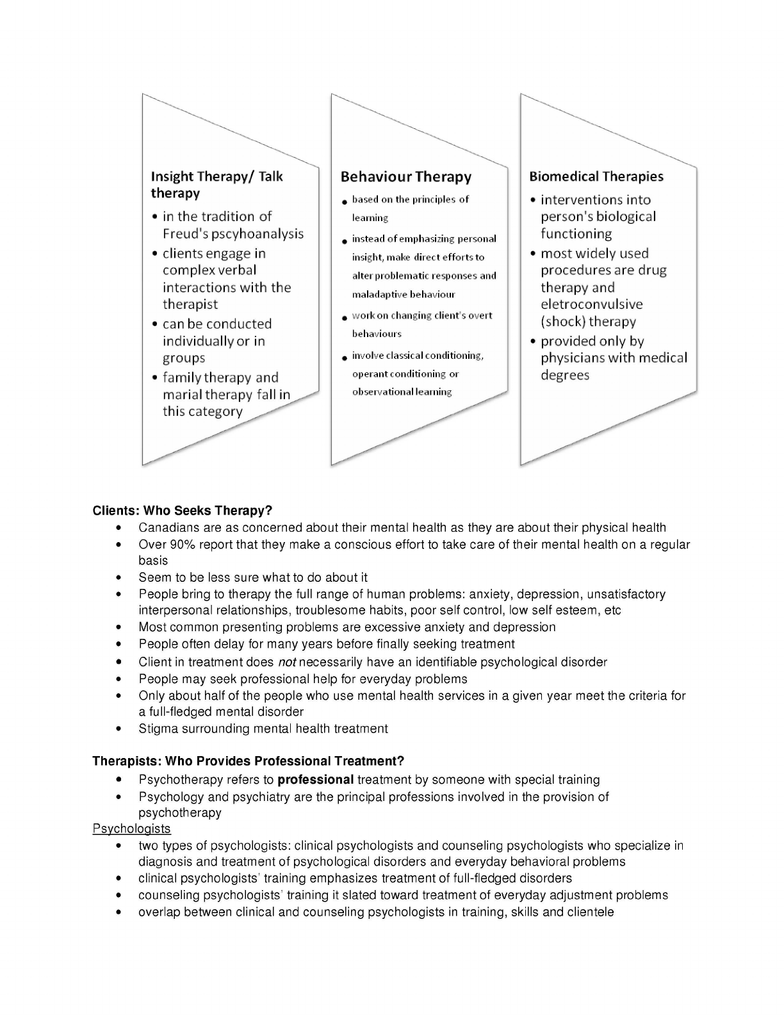 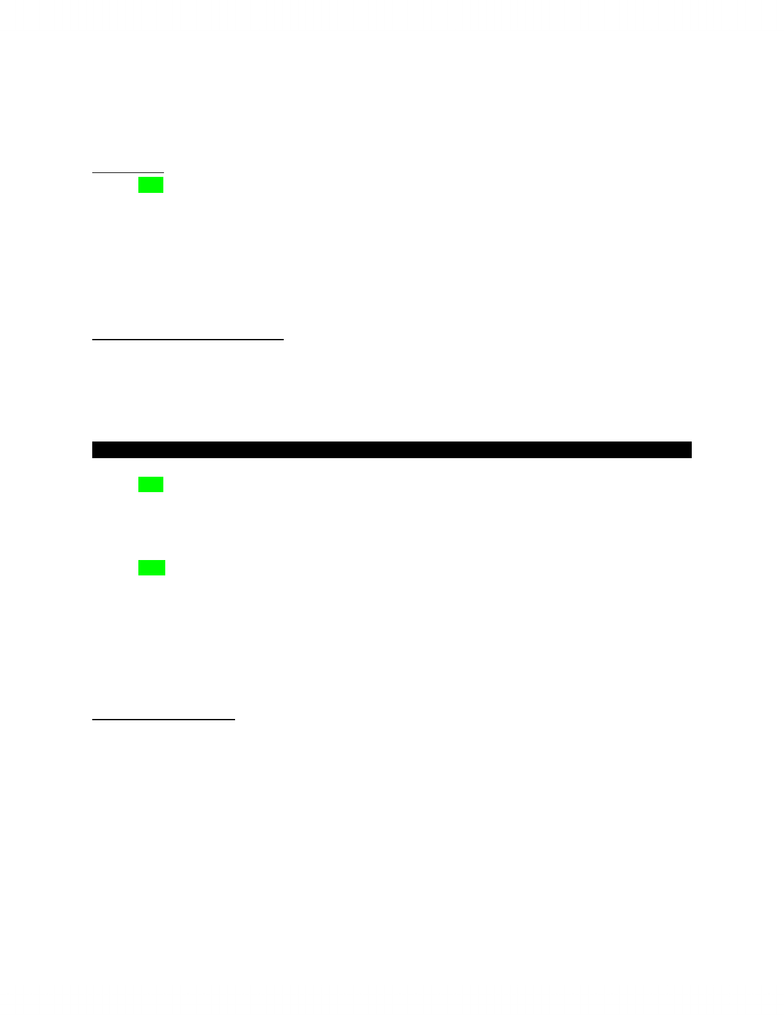 •must earn a doctoral degree
•In providing therapy, psychologists use either insight or behavioral approaches
•Treatment by psychologists is not part of govt medical insurance funding systems- stops many
people from seeking treatment
Psychiatrists
•defn: physicians who specialize in the diagnosis and treatment of psychological disorders
•also treat everyday behavioral problems
•devote more time to relatively severe disorders (schizophrenia, mood disorders) and less time to
everyday marital, family, job and school problems
•have an M.D. degree
•in their provision of therapy, psychiatrists increasingly emphasize drug therapies
•psychiatrists are more likely to use psychoanalysis and less like to use group therapies or
behaviour therapies
•contemporary psychiatrists primarily depend on medication as their principal mode of treatment
Other mental health professionals
•other mental health professions also provide psychotherapy services
•in hospitals – clinical social workers and psychiatric nurses
•many kinds of counselors also provide therapeutic services
•usually found working in schools, colleges, and assorted human service agencies
•terms clinician, therapists, and provider refer to mental health professionals of all kinds
Insight Therapies
•defn: involve verbal interactions intended to enhance client’s self knowledge and thus promote
healthful changes in personality and behaviour
Psychoanalysis
•Sigmund Freud
•Defn: an insight therapy that emphasizes the recovery of unconscious conflicts, motives and
defenses through techniques such as free association and transference
•Appreciate the logic of psychoanalysis, we have to look at Freud’s thinking about the roots of
mental disorders; Freud mostly treated anxiety-dominated disturbances which were then called
neuroses (ie. Phobic, panic, ocd and conversion disorders)
•Freud believed that neurotic problems are caused by unconscious conflicts left over from early
childhood
oInner conflicts among id, ego and superego, usually over sexual and aggressive impulses
•He noted that defensive maneuvers often lead to self-defeating behaviour
Probing the Unconscious
•Analyst attempts to probe the murky depths of unconscious to discover unresolved conflicts
causing the client’s neurotic behaviour
•Therapist relies on two techniques: free association and dream analysis
•Analysts must interpret their client’s dreams and free association; this is a critical process
throughout psychoanalysis
www.notesolution.com
Unlock document