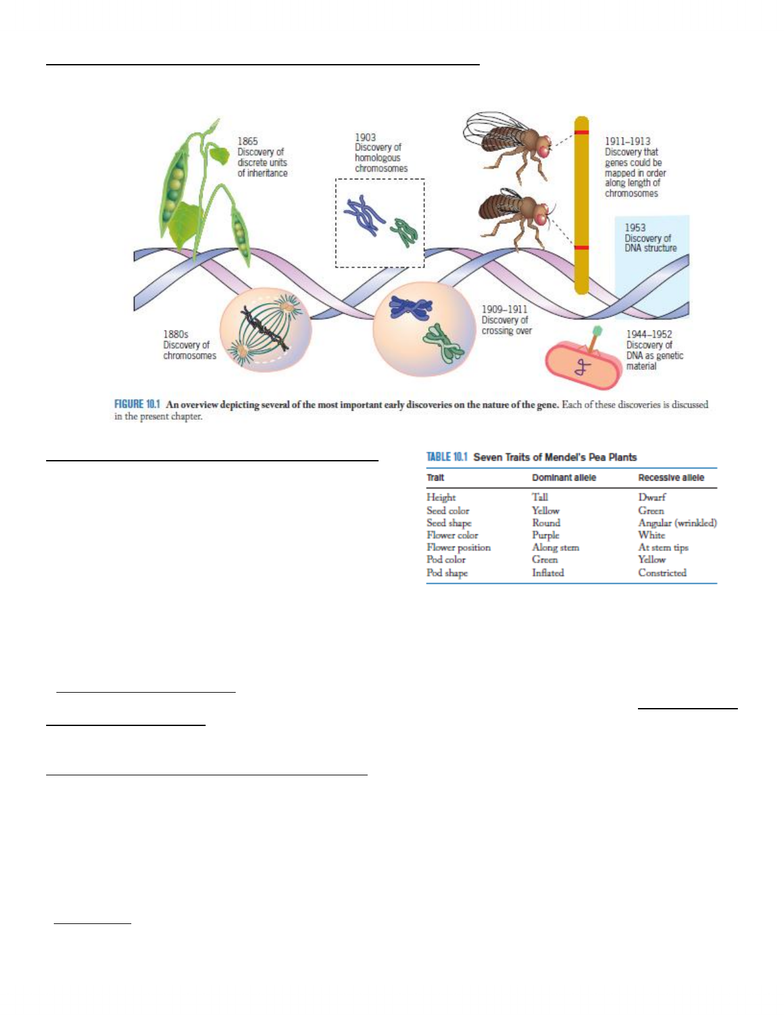 Chapter 10 – The Nature of the Gene and the Genome
- Genome: Collective body of genetic information that is present in a species, contain all genes to make
organism e
10.1 The Concept of a Gene as a Unit of Inheritance
- 1860s: Gregor Mendel – small garden plot for pea
plants: his goal was to mate or cross pea plants having
different inheritable characteristics and to determine
the Pattern by which these characteristics were
transmitted to offspring
- Mendel’s conclusion:
1. Characteristics of plants were governed by distinct
factors/units of inheritance – genes, posses 2 copies of gene
that control development of traits (identical or non-identical)
Allele - Alternate forms of gene
2. Each reproductive cell/gamete produced by plant contained 1 copy of gene for each traits – recessive or
dominant, from male and female gamete
3/ Even though pair of alleles remained together, they became separated/segregated during formation of gametes
– Mendel’s law of segregation
4. Segregation of pair of alleles for 1 trait had no effect ton segregation of alleles for another trait – Mendel’s law of
independent assortment
- 1900: European botanists independently reached same conclusion and found Mendel’s paper
10.2 Chromosomes: The Physical Carriers of the Gene
The Discovery of Chromosomes
- Early 1880s’: Walther Flemming – Cytoplasmic contents were shuttled into 1 daughter cell depending on
plane where furrow happened to divide the cell
- During cell division, material of nucleus became organized into visible “threads” – chromosomes –
“coloured bodies”
- Fertilization: Sperm and egg both have nucleus and x-somes. Normal development (Boveri) is “dependent upon a
particular combination of x-somes, and individual x-somes must possess different qualities” – “qualitative
difference”
- Polyspermy: Characterized by disruptive cell division and early death of embryo
- Eduoard can Beneden: Cells of worm’s body had 4 large x-somes, but male and female nuclei in egg just after
fertilization had 2 x-somes apiece
Unlock document 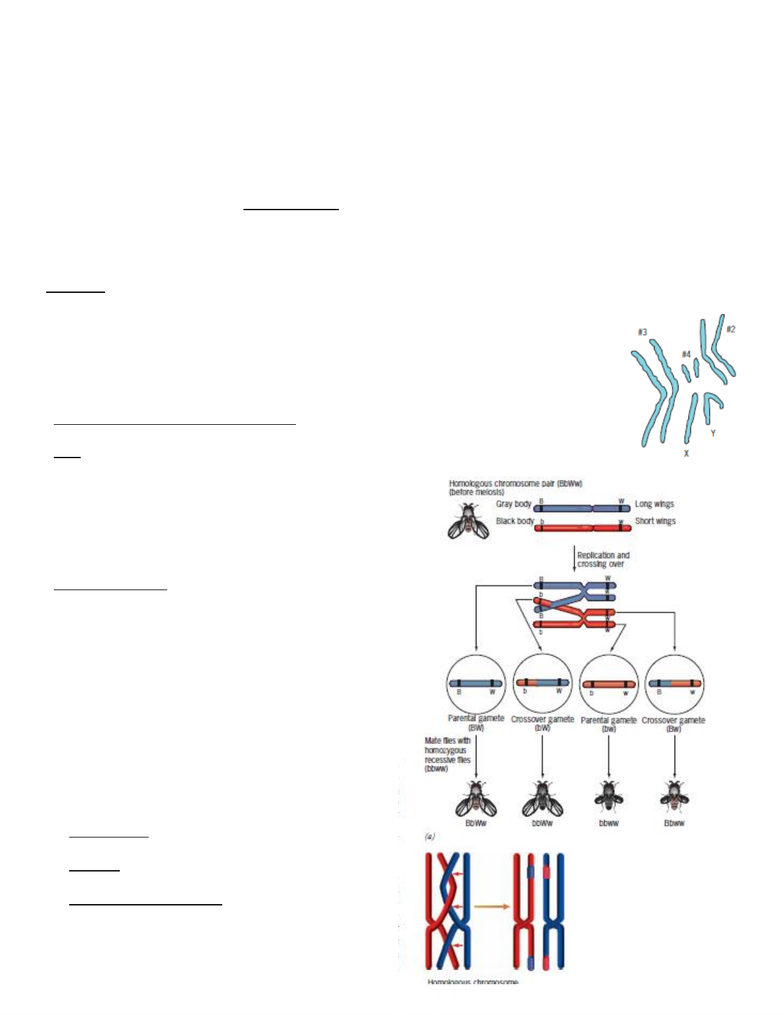 - August Weismann proposed that meiosis included a “reduction division” during x-some number reduced ½ prior
to formation of gametes
Chromosomes as the Carriers of Genetic Information
- 1903: Walter Sutton published paper pointing directly to x-somes as physical carriers of Mendel’s genetic factors
Followed development of sperm cells in grasshopper  mitotic stages of grasshopper spermatogonia, counted 23
x-somes, 11 pairs of c-somes and 1 additional x-some “accessory chromosome = sex determining x x-some”
Each cell of pairs of x-somes – homologous x-some – correlated w/ inheritable factors by Mendel
Each pair of x-some were associated w/ one another - bivalent
- The X-some as a Linkage Group: Linkage Group- Genes on the same x-some if they are linked to one another
- Genetic Analysis in Drosophilia: Fruit fly has generation time of 1 day and produce 1000 eggs in a lifetime
1909: Fruit flies ideal for Thomas Hunt Morgan of Columbia University – disadvantage is that there was only 1
“strain” of fly available – wild type
Tried to generate his own fruit flies – found his first mutant in 1 year, made 85 mutants
Mutation: Occurs within a gene, altering it permanently so that the altered trait is passed from generation
to generation, spontaneous change
Crossing Over and Recombination
- Maternal and paternal characteristics that were inherited by individual on separate
homologous x-somes could be reshuffled so that they ended up on the same x-some and v.v
- F.A. Janssens had observed that homologous x=somes of bivalents became wrapped
around each other during meiosis
- Crossing over/genetic recombination: Cold account for appearance of
offspring/recombinants having unexpected combinations of genetic traits
- Loci: Position of genes along x-some
Mutagenesis and Giant Chromosomes
- 1927: H.J. Muller found that flies subjected to sublethal
dose of X-rays displayed more than 100 times the
spontaneous mutation rate
- 1933: Giant x-some in certain insect cell by Theophilus
Painter – there is variability among organisms
- Polytene x-somes: Rich in detail, displaying ~5000
bands when strained and examined microscopically
- HAVE BEEN USEFUL FOR COMPAING BANDING
PATTERNS AMONG PPOLYTENE X-SOMES
386
10.3 The Chemical Nature of the Gene
Structure of DNA
- 1950s in US and England, solved by James Watson
and Francis Crick at Cambridge in 1952
- Base Composition
 Nucleotide: 5-C sugar deoxyribose (1 phosphate
is esterified at 51 position and 1 nitrogenous
base at 11 site)
 Pyrimidines: Contains single ring  thymine/T
and cytosine/C
 Purines: Contains 2 rings  Guanine/G and
adenine/A
 Phosophodiester bonds = sugar and phosphate
groups joined by 31 – 51 bonds
 Nucleotide polarized structure called 51 end
Unlock document 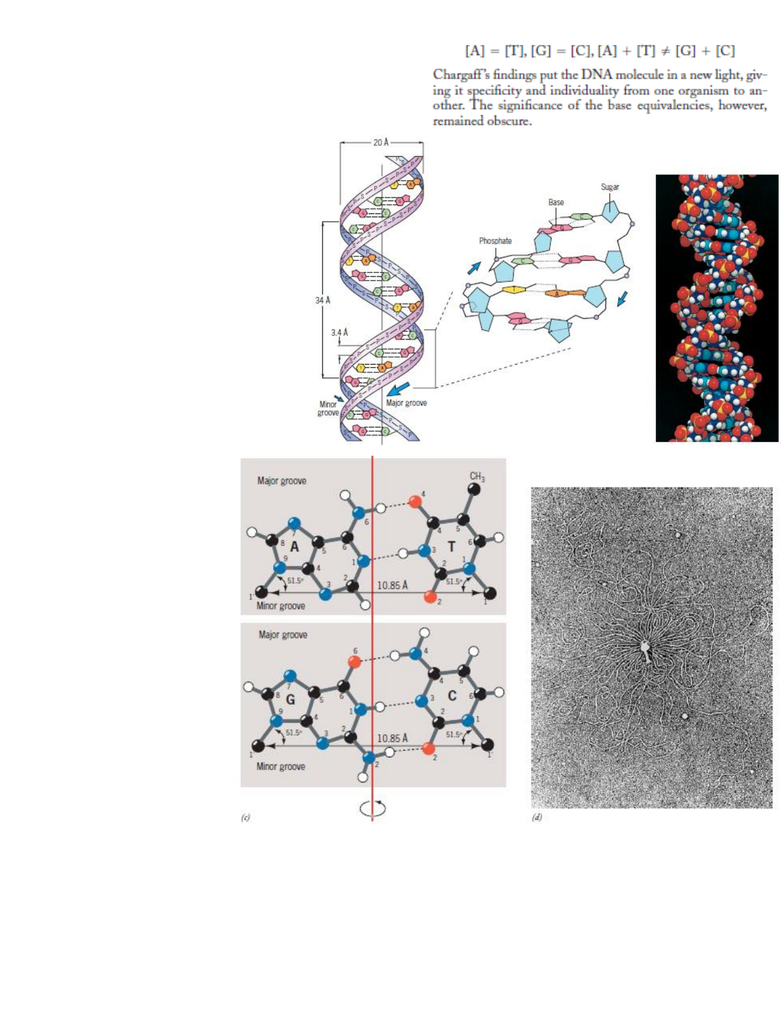  DNA molecule held the key to its importance, determined
the relative amounts of each base in various samples of
DNA  base composition of the samples
The Watson-Crick Proposal
- Information about 3D organization of
DNA was needed if its biological activity
was understood, using X-ray diffraction
data by Rosalind Franklin and
Maurice Wilkins)
1. Molecules composed of 2 chains of
nucleotides, followed by Linnus
Pauling, who suggested that DNA was
composed of 3 nucleotide strands
2. 2 chains around each other to form a
pair of right-handed helices, clockwise,
revealed in pattern of spots by
Franklin’s X-ray diffraction image
3. 2 chains comprising 1 double helix
run into opposite direction = anti-
parallel. (if 5  31, its partner must be
aligned in 31  51)
4. Sugar-phosphate-sugar-phosphate
backbone is located on outside of
molecule, gives LARGE (-)
charge
5. Bases occupy [lanes that
are perpendicular, stacked
one on top of another,
hydrophobic interactions
and van der Waals forces
provide stability
6. Held together by H-bonds
b/w each base of 1 strand
and base on other strand.
Strengths of H-bonds are
additive, and large numbers
of H-bonds holding strands
together make double helix
a stable structure
7. Distance from phosphate
atom of backbone to center
of axis is 1 nm
8. Pyrimidine in 1 chain is
always paired w/ purine in
other chain, produces
molecule that is 2 nm in
length
9. N=atoms linked to C-4 of cytosine and C-6 of adenine are amino configuration. O2 atoms linked to C-6 of G and C-
4 of T are in keto configuration (C=O)
Restrictions suggest that adenine was only purine structurally capable of bonding to T and G was only purine able
to bond to C
10. Spaces b/w adjacent turns of helix form 2 grooves of different width – wider major groov and more narrow
minor groove
11. Double helix makes 1 complete turn every 10 residues, 150 turns/ million Daltons of molecular mass
Unlock document