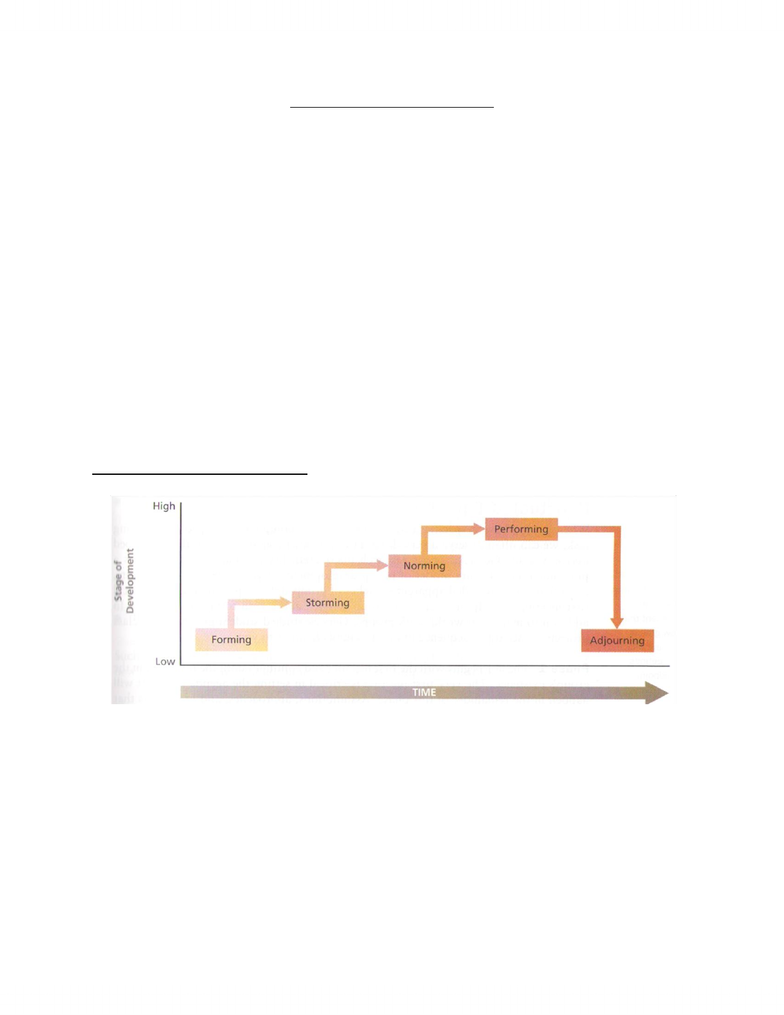 Chapter 7 – Groups and Teamwork
What is a Group?
 Group: Two or more people interacting interdependently to achieve a common goal.
 Interaction is the most basic aspect of the group and members are interdependent on one
another.
 Group membership is important because groups (1) exert influence – social mechanisms by
which we acquire many beliefs, values, attitudes, and behaviours; (2) provide a context in which
we are able to exert influence on others.
 Formal Work Groups: Groups that are established by organizations to facilitate the achievement
of organizational goals. Most common type  manager and employees who report to manager.
 Other types of formal work groups:
o Task Forces: temporary groups that meet to achieve particular goals or to solve
particular problems, such as suggesting productivity improvements.
o Committees: usually permanent, handle recurrent assignments outside the usual work
group structures.
 Informal Groups: Groups that emerge naturally in response to the common interests of the
organizational members. Membership often cuts across formal groups. Can either help or hurt
the organization, depending on their norms for behaviour.
Group Development
Typical Stages of Group Development
 Stages of Group Development:
 Forming. Members try to orient themselves by “testing the waters.” This situation is often
ambiguous, and members are aware of their dependency on each other.
 Storming. Conflict often emerges as members determine whether they will go along with the
way the group is developing. Issues with sorting out roles and responsibilities.
 Norming. Members resolve issues and develop social consensus. Compromise is necessary.
Interdependence is reorganized, norms are agreed to, and group becomes more cohesive.
Information and opinions flow freely.
 Performing. Energy is devoted toward task accomplishment. Achievement, creativity, and
mutual assistance are prominent themes of this stage.
 Adjourning. Rites and rituals that affirm the group’s previous successful development are
common. Members often exhibit emotional support for each other.
Unlock document 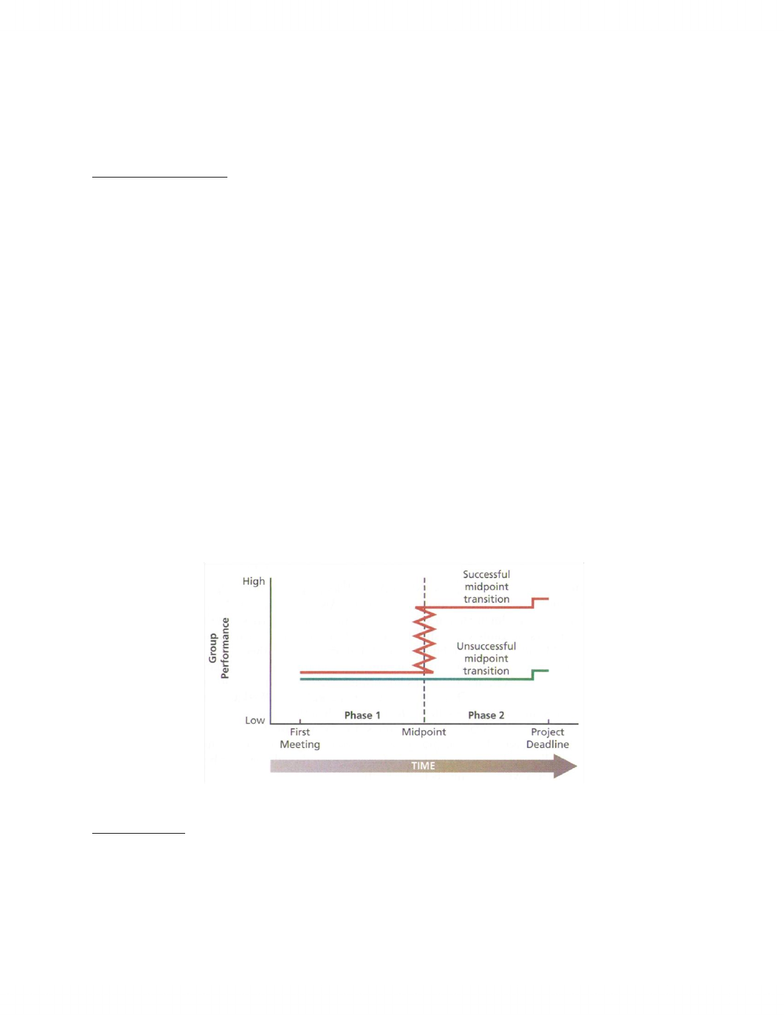  This process applies mainly to new groups that have never met before. Organizational settings
can be so structured that storming and norming stages are eliminated. Well-acquainted task
forces and committees can short-circuit these stages when they have a new problem to work
out.
Punctuated Equilibrium
 Punctuated Equilibrium Model: A model of group development that describes how groups with
deadlines are affected by their first meetings and crucial midpoint transitions.
 Phase 1. Begins with first meeting (critical in setting agenda for what will happen in the
remainder of the phase) and continues until the midpoint of the group’s existence.
Assumptions, approaches, and precedents developed in the first meeting end up dominating the
first half of the group’s life. Little visible progress made towards goal.
 Midpoint Transition. Occurs half way to deadline. Marks change in approach, and how the group
manages the change is critical for the group to show progress. May consolidate previously
acquired information or mark a completely new approach, but it crystallizes the group’s
activities for Phase 2 just like the meeting did for Phase 1.
 Phase 2. Decisions and approaches adopted at midpoint get played out in Phase 2. Concludes
with a final meeting that reveals a burst of activity and concern for how outsiders will evaluate
the product.
 Advice:
o Prepare carefully for first meeting because it will strongly determine what happens in
the rest of Phase 1. Stress motivation and excitement about the project.
o As long as people are working, do not look for radical progress during Phase 1.
o Evaluate people’s strengths and weaknesses. Recognize fundamental change in
approach is needed for progress to occur. Focus on strategy for Phase 2.
o Be sure that adequate resources are available to execute Phase 2 plan.
o Resist deadline changes. Could damage midpoint transition.
 The Punctuated Equilibrium Model of Group Development for Two Groups:
Group Structure and Its Consequences
Group Structure
 Size and Satisfaction. Larger groups  less satisfaction  harder to incorporate different
viewpoints and larger groups might prompt conflict and dissension. Identify less easily with
successes of the group, may be inhibited about participating, and decreased time for verbal
participation.
Unlock document 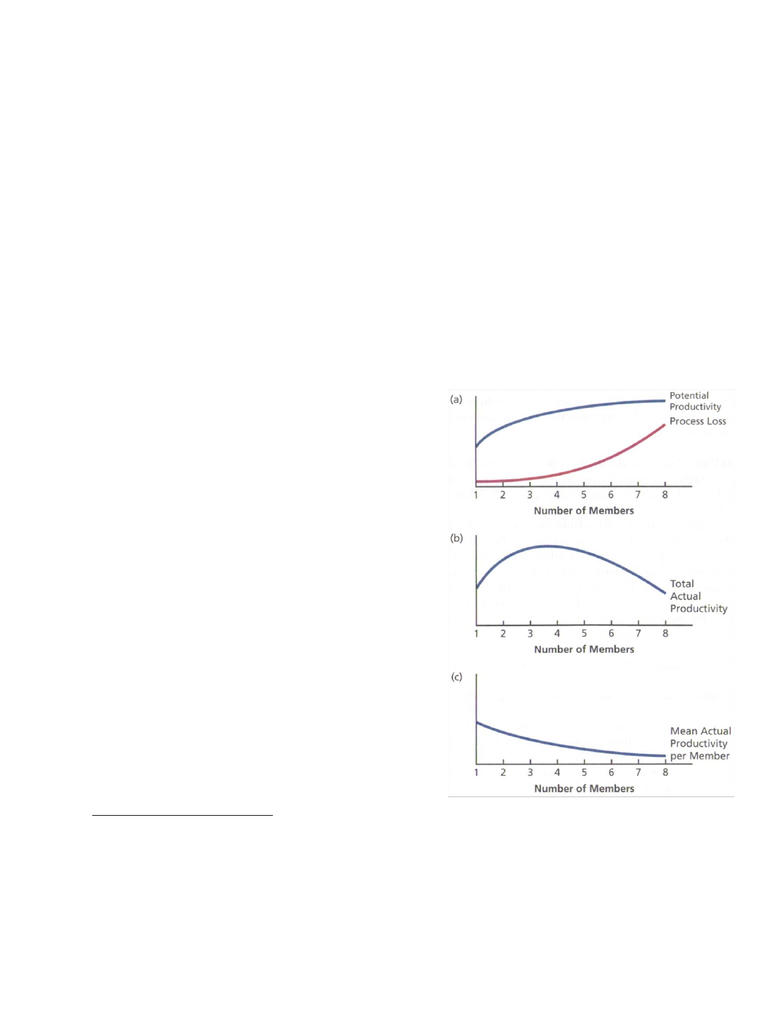  Size and Performance. Depends on the exact task the group needs to accomplish and how we
define good performance.
o Additive Tasks: Tasks in which group performance is dependent on the sum of the
performance of individual group members. Potential performance increases with group
size. E.g., Building a house.
o Disjunctive Tasks: Tasks in which group performance is dependent on the performance
of the best group member. Potential performance increases with group size because the
probability that the group includes a superior performer is greater.
o Process Losses: Group Performance difficulties stemming from the problems of
motivating and coordinating larger groups. Bigger groups suffer from process losses.
Actual Performance = Potential Performance – Performance Losses
o Conjunctive Tasks: Tasks in which group performance is limited by the performance of
the poorest group member. The potential and actual performance of conjunctive tasks
would decrease as group size increases because the probability of including a weak link
in the group goes up.
o
 Relationships Among Group Size, Productivity, and Process Losses:
(a) Both potential performance and process
losses increase with group size for additive
and disjunctive tasks.
(b) The actual performance increases with size
up to a point and then falls off.
(c) The average performance of group
members decreases as size gets bigger.
 Up to a point, larger groups might perform better
as groups, but individual members tend to be less
efficient.
Diversity of Group Membership
 Diversity has a strong impact on interaction patterns – more diverse groups have a more difficult
time communicating effectively and becoming cohesive.
 Diverse groups may take longer to do their forming, storming, and norming, but once they
develop, more and less diverse groups are equally cohesive and productive.
Unlock document