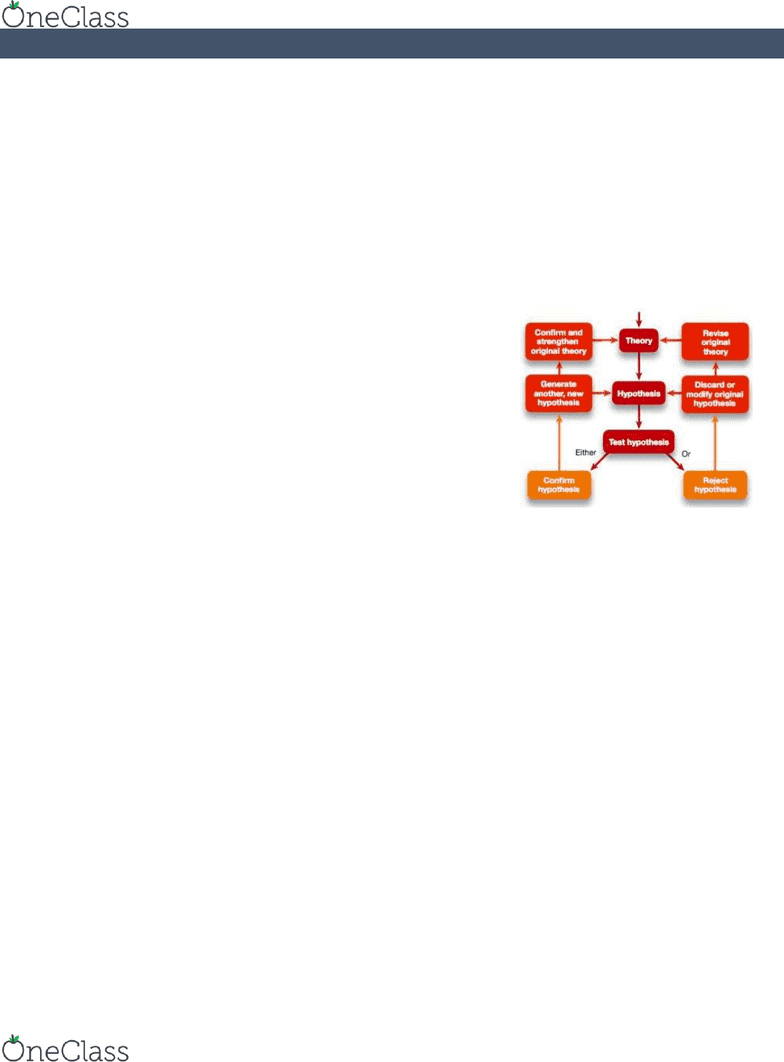 PSY100 TEXTBOOK NOT E S
Module 1.1: The Science of Psychology
 Two unifying qualities allow us to group fields of study into the category of psychological
science
o Psychology involves study of behaviour that can include perceptions, thoughts, and
emotions
o Psychologists employ the scientific method in their work
 Psychology  the scientific study of behaviour, thought, and experience, and how they can be
affected by physical, mental, social and environmental factors
The Scientific Method
 Whether a field of study is scientific is NOT based on the subject, but on the use of the scientific
method
 Scientific method  a way of learning about the world through
collecting observations, developing theories to explain them,
and wing the theories to make predictions
o Involves a dynamic interaction between hypothesis
testing and constructing theories
Hypotheses: Making Predictions
 Hypothesis  testable prediction about processes that can be
observed and measured
o Can be supported or rejected
o Scientific hypothesis must be testable
 Pseudoscience  idea that is presented as science but does not
actually utilize basic principles of scientific thinking or procedure
o E.g. astrology
Theories: Explaining Phenomena
 Theory  an explanation for a broad range of observations that also generates new hypotheses
and integrates numerous findings into a coherent whole
o General principles or explanations of some aspect of the world
 Theories are built from hypotheses that are repeatedly tested and confirmed
 Any scientific theory must be falsifiable
o Evidence can be found to strengthen or challenge theories
o Ensures that science is self-correcting
 Theories are not the same as opinions or beliefs
 All theories are not equally plausible
o May be multiple theories for explaining the same thing, some are stronger than others
 Measure of a good theory is not the number of people who believe it to be true
The Biopsychosocial Model
 A means of explaining behaviour as a product of biological, psychological, and sociocultural
factors
o Biological influences involve brain structures and chemicals, hormones, and external
substances such as drugs
o Psychological influences involve memories, emotions, and personalities, and how these
factors shape the way we think about/respond to different people/situations
o Social factors (family, peers, culture) can impact our behaviour
 All levels connect and influence each other
find more resources at oneclass.com
find more resources at oneclass.com
Unlock document 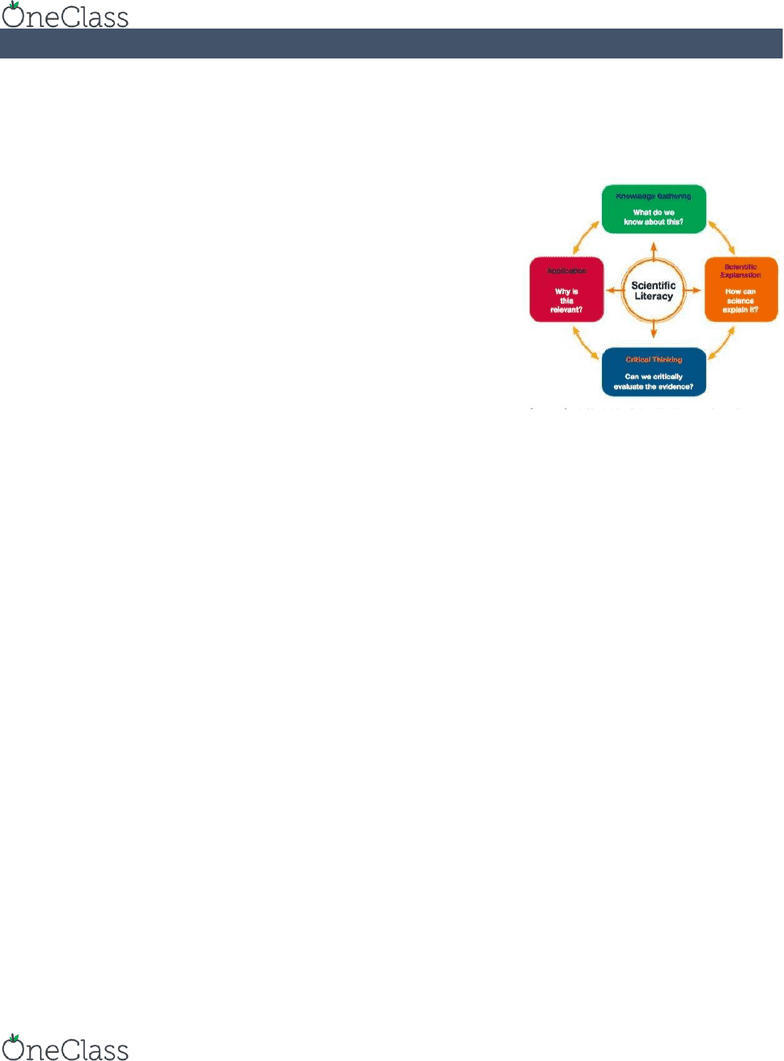 PSY100 TEXTBOOK NOT E S
o Firing of brain cells can influence how we think and remember information, which
affects how we interact with others
o Social situations which annoy us can trigger release of chemicals and hormones in the
brain
 Everything in life is occurring at all three levels
Building Scientific Literacy
 Scientific literacy  ability to understand, analyze, and apply
scientific information
 Several key components
o Ability to learn new information
o Asking questions
o Ability to apply results of scientific studies to different
situations  generalize results
Critical Thinking, Curiosity, and a Dose of Healthy Skepticism
 Critical thinking  exercising curiosity and skepticism when
evaluating claims of others, and with our own assumptions and
beliefs
o Ability to think critically can be learned and developed with a conscious effort
 Core set of habits and skills to develop critical thinking
o Be curious
o Examine the nature and source of evidence
 Not all research is good equality
o Examine assumptions and biases of your own/others
o Avoid overly emotional thinking
o Tolerate ambiguity  complex issues usually have unclear answers
o Consider alternative viewpoints and interpretations of evidence
 It is also important to determine what does not constitute critical thinking
 Critical thinking means to intentionally examine knowledge, beliefs, and means by which
conclusions are obtained
 Principle of parsimony  the simplest of all competing explanations (most parsimonious) of a
phenomenon should be the one we accept
How We Learn and Remember
 Working the model  moving beyond just learning vocabulary, understanding scientific
explanations, thinking critically and discovering applications of material
 Mass vs. disturbed study techniques
o Massed learning  perform all studying for an exam in one lengthy session
o Disturbed learning  having shorter sessions spread out in a few days
 More effective
 Study  experimental participants read a list of words and complete a test of what they read
o Results were better in participants who studied with disturbed techniques
Module 1.2: How Psychology Became a Science
Psychology’s Philosophical and Scientific Origins
 Science is a philosophy of knowledge that stems from two fundamental beliefs: empiricism and
determinism
find more resources at oneclass.com
find more resources at oneclass.com
Unlock document 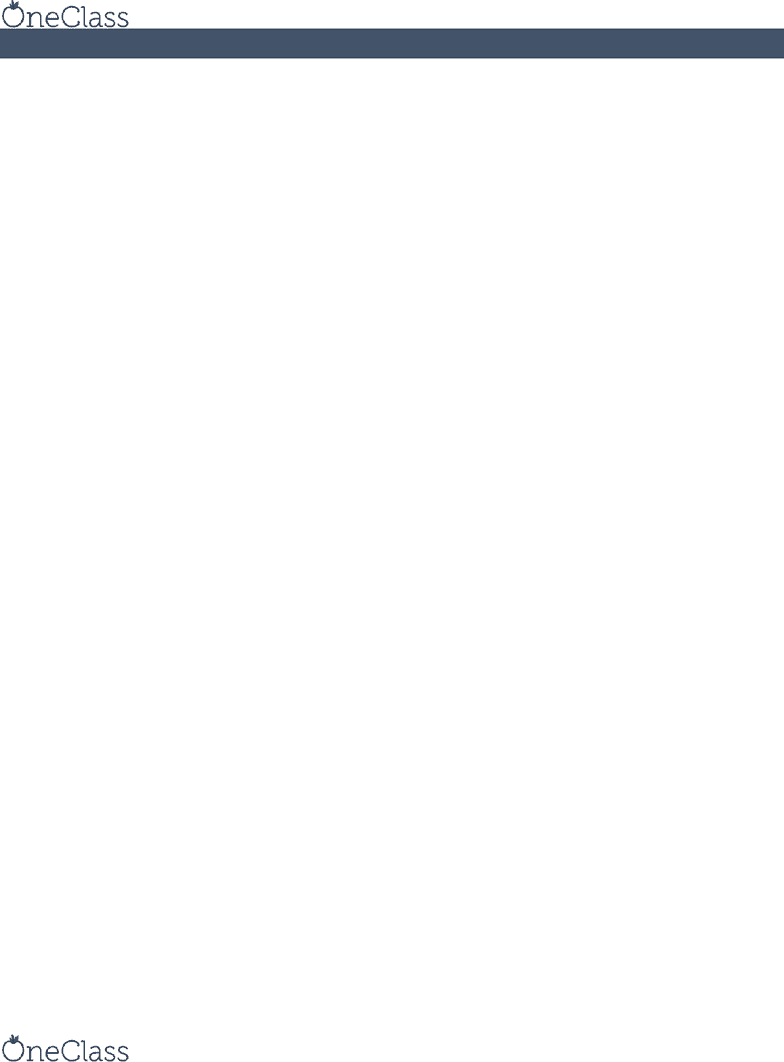 PSY100 TEXTBOOK NOT E S
 Empiricism  philosophical tenet that knowledge comes through experience
o “Seeing is believing”  empiricism means that knowledge about the world is based on
careful observation, not on common sense or speculation
 Thinking and reasoning about observations are just as important
o Scientific theories must be logical explanations of how observations fit together
 Determinism  the belief that all events are governed by lawful, cause-and-effect relationships
o Free will vs. determinism  we feel as if we are in control of our own behaviours
o There are compelling reasons to believe that some of our behaviours are determined
 Psychological science is both empirical and deterministic
 Behaviour can only be understood by making observations and testing hypotheses
o Occurs at several different levels ranging from cells to societies
Influences from the Ancients: Philosophical Insights into Behaviour
 Ancient Egyptian doctors noticed that damage to different brain areas led to vastly different
impairments
 Ancient Greece  Hippocrates developed the world’s first personality classification scheme
o Four humours or fluids flowed through the body and influenced both health and
personality
o Blood, yellow bile, black bile, and phlegm
o Combinations of four humours were thought to lead to specific moods and behaviours
 Galen of Pergamon refined Hippocrates’ more general work and suggested that four humours
combined to create four temperaments, or emotional and personality characteristics that remained
stable throughout lifetime
o Four temperaments
 Sanguine (blood)  a tendency to be impulsive, pleasure-seeking, and
charismatic
 Choleric (yellow bile)  a tendency to be ambitious, energetic, and a bit
aggressive
 Melancholic (black bile)  a tendency to be independent, perfectionistic, and a
bit introverted
 Phlegmatic (phlegm)  a tendency to be quiet, relaxed, and content with life
o Temperaments of most people would be combination of extremes
 The work of Hippocrates and Galen moved the understanding of human behaviour forward by
attempting to categorize different types of personalities
 Dark ages  time in which few medical or scientific advances were suppressed, often being
replaced by religious texts or philosophy that was consistent with views of religious leaders
 Psychology didn’t benefit from scientific revolution of 1500s and 1600s
o Physics, astronomy, physiology, biology, and chemistry all experiences growth in
knowledge and technology
o Psychology didn’t become specific until 1800s
o Zeitgeist  refers to a general set of beliefs of a particular culture at a specific time in
history
 People were not ready to accept science that could be applied to human
behaviour and thought
 Philosophy of Materialism  the belief that humans, and other living beings, are composed
exclusively of physical matter
o We are nothing more than complex machines that lack a self-conscious, self-controlling
soul
o Dualism  opposing belief that there are properties of humans that are not material (a
mind or soul separate from the body)
find more resources at oneclass.com
find more resources at oneclass.com
Unlock document