Chapter 13.1: Defining and Classifying Psychological Disorders
•Medical model: using our understanding of medical conditions to think about psychological conditions
oE.g. someone who experiences hallucinations would likely be diagnosed with psychological
disorder in US, but might be possessed by evil spirits, victim of a curse in another time or place
•Biopsyosocial model:
•Abnormal psychology: psychological study of mental illness
oPerson who cuts/ burns himself until he sustains serious injury is behaving abnormally
oSomeone who obtains a medical degree before age of 20 is unusual (may or may not show
mental illnesses)
Person who harms himself -> maladaptive behavior: behavior that hinders a persons
ability to function in work, school, relationships, or society
American Psychiatric Association (2000) -> three criteria to identify maladaptive
behavior:
1) The behavior causes distress to self or others
2) The behavior impairs the ability to function in day-to-day activities
3) The behavior increases the risk of injury, death, legal problems or punishment for
breaking rules, or other detrimental consequences
•Diagnostic and Statistical Manual for Mental Disorders (fourth edition, Text Revision); DSM-IV: the
manual that establishes criteria for the diagnosis of mental disorders
oCreated & updated by expert panels from APA
oSets clear guidelines for determining the presences & severity of some 350 mental disorders
oFor each disorder in DSM-IV, guidelines convey 3 important pieces about individuals
experience:
1) A set of symptoms
2) Etiology: or the origins or causes of symptoms
3) How these symptoms will persist/ change over time, with out without professional treatment
oDSM-IV addresses problems associated with the psychical, mental, and social functioning of an
individual
Attests to how useful the biopsyosocial model is in understanding mental health
Many insurance companies will not cover treatment for mental health problems without a
formal diagnosis
Has limits -> mental health professionals do not unanimously agree on how to classify
many disorders, and disputers often arise over whether some conditions should be
included or excluded from the manual
•Disorders covered in the DSM-IB are primarily based on observations of clients/
patients, rather than on potentially more objective markers of mental disorders
such as genes, neurotransmitters, or brain abnormalities- practice that leaves room
for subjectivity & for individuals to potentially fake psychological problems ->
psychologists believe that biological markers, some of which could be detected by
brain scans, should be identifies and incorporated into diagnostic criteria
Unlock document 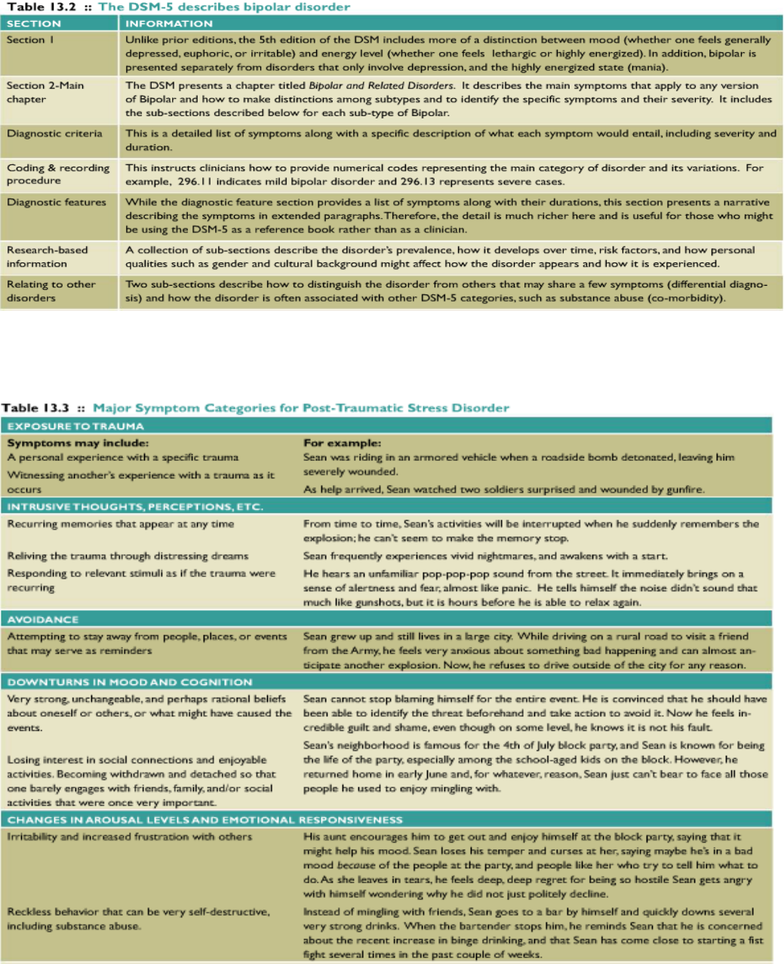 •DSM-IV -> created new edition – the DSM-V- in May 2013
oReflect the substantial advances in neuroscience & genetics that have contributed to our
knowledge of psychological disorders
•Challenge when classifying mental disorders -> either/ or distinction between normal &
abnormal does not reflect the complexity of human behavior
oMany symptoms of psychological disorders consist of typical thoughts and behaviors,
expect that they’re more severe & longer lasting than usual (may occur in inappropriate
contexts or without any clear reasons)
Unlock document

Viewing psychological disorder as an extreme case of otherwise normal behavior
reflects the dimensional view
•E.g. someone who has an unusually stressful experiences that brings about
heightened anxiety may feel fine after several days
•In contrast -> when stress/ anxiety lasts a long period of time -> can
change persons life -> then the condition may become recognized as a
psychological disorder (PTSD) -> veterans returning from active military
duty, or people who survive violence crimes, accidents/ traumatic events
oIndividuals might show range of symptoms that are indicative of
PTSD depression
Categorical view regards different mental conditions as separate types;
differences between normal & abnormal functioning are of kind, rather than
degree
•According to this approach, a disorder is not just an extreme version of
normal thoughts & behaviors -> something altogether different
•E.g. Down syndrome
oInvolves an unusual genetic condition: As individual either has the
extra 21st chromosome linked to Down syndrome or does not
oNot expect to find someone who as a ‘partial” form of the disorder
•The condition must be categorical is not a psychiatric criterion for mental illness
•Andrea Yates committed psychiatric hospital in Texas for murdering her 5 children
oWas not found guilty by reason of insanity -> jury believed she could not distinguish
right from wrong at time of murders
•Jeffrey Dahmer murdered at least 15 men -> attempted to turn his victims into zombies -> poured
acid in holds & drilled into their skulls/ engaged in sexual & cannibalistic acts with corpses ->
found to be same -> his admission of guild & remorse suggested he understood what he did was
wrong
oInsanity defense: legal strategy of claiming that a defendant was unable to differentiate
between right & wrong when criminal act was committed
•Contemporary research is examining use of diagnostic labels from multiple perspectives
oHow does diagnostic labels affect the individual’s self-perception?
Group led by Jill Holm-Denoma -> 53 volunteers participate rated their positive
& negative emotions at 5 times: before & after an intake session
•Stigma & stereotyping can have negative effects, leading to prejudice & misattribution of
behaviors
•Insanity means that an individual could not distinguish between right and wrong when he/she
broke the law
•Physiological symptoms of PYSD may be common along people of different cultures, but the
specific concerns people have can vary
•Labeling can either have positive/ negative effects, deepening on factors such as context &
cultural expectations
Chapter 13.2: Personality and Dissociative Disorders
•Personality disorders: particularly unusual patterns of behavior for one’s culture that are maladaptive,
distressing to oneself or others, and resistant to change
oObserved in people who tend to be quirky & difficult to get along with, do not present threat to
themselves or others
oSignificant functional impairment or subjective distress
oMarked deviation from cultural expectations
Unlock document