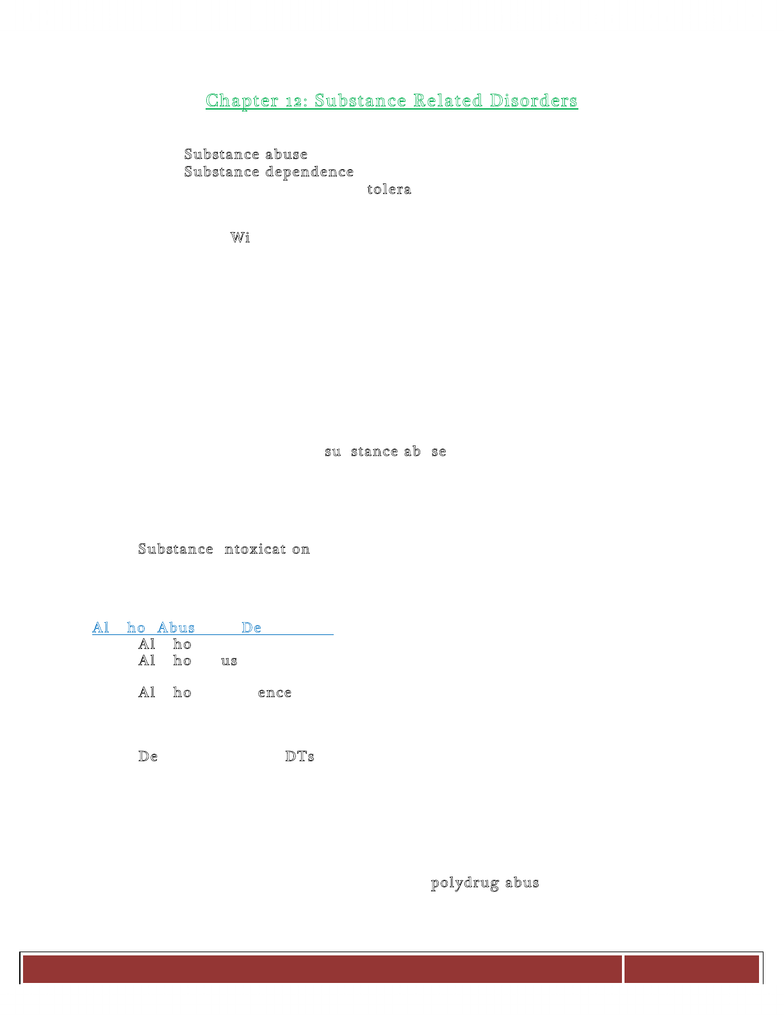 Chapter 12: Substance Related Disorders
Page 1
Chapter 12: Substance-Related Disorders
• The pathological use of substances falls into 2 categories
o Substance abuse
o Substance dependence ! presence of at least 3 of the following
" The person develops tolerance, indicated by larger doses of the
substance being needed to produce the desired effect or the effects of
the drug becoming markedly less if the usual mount is taken
" Withdrawal symptoms (negative physical and psychological effects
when they stop taking it)
" The person uses more of the substance or uses it for a longer time than
intended
" The person recognizes excessive use of the substance, he/she may tried
to reduce usage but has been unable to do so
" Much of the person’s time is spent in efforts to obtain the substance or
recover from its effects
" Substance use continues despite psychological or physiological
problems caused or exacerbated by the drug
" The person gives up or cuts back participation in many activities
• Substance dependence is diagnosed as being accompanied by physiological
dependence (aka addiction) if either tolerance or withdrawal is present
• For less serious diagnoses of substance abuse, the person must experience 1 of the
following as a result of recurrent use of the drug
o Failure to fulfill major obligations
o Exposure to physical dangers
o Legal problems
o Persistent social or interpersonal problems
• Substance intoxication: ingestion of a substance affects the CNS and produces
maladaptive cognitive and behavioural effects
• If a person addicted to a drug is denied it and then experiences withdrawal, the
person receives a diagnoses of both substance dependence and substance withdrawal
Alcohol Abuse and Dependence
• Alcoholic doesn’t have a precise meaning
• Alcohol abuse: used to refer to both aspects of excessive and harmful use of
alcohol
• Alcohol dependence: may include tolerance or withdrawal reactions (people who
are physically dependent on alcohol)
• In withdrawal the person is often anxious, depressed, weak, restless and unable to
sleep
• Delirium tremens (DTs): when the level of alcohol in the blood drops suddenly
the person has hallucinations (happens when a person has been drinking for a
number of years). They may feel like spiders are crawling on them, feel feverish,
disoriented and terrified
• The person who abuses alcohol, in contrast to the person physically dependent on it,
experiences negative social and occupational effects from the drug but does not show
tolerance, withdrawal, or the compulsive drinking patterns seen in the person who is
alcohol dependent
• Alcohol abuse or dependence is often part of polydrug abuse using or abusing
more than one drug at a time
www.notesolution.com
Unlock document 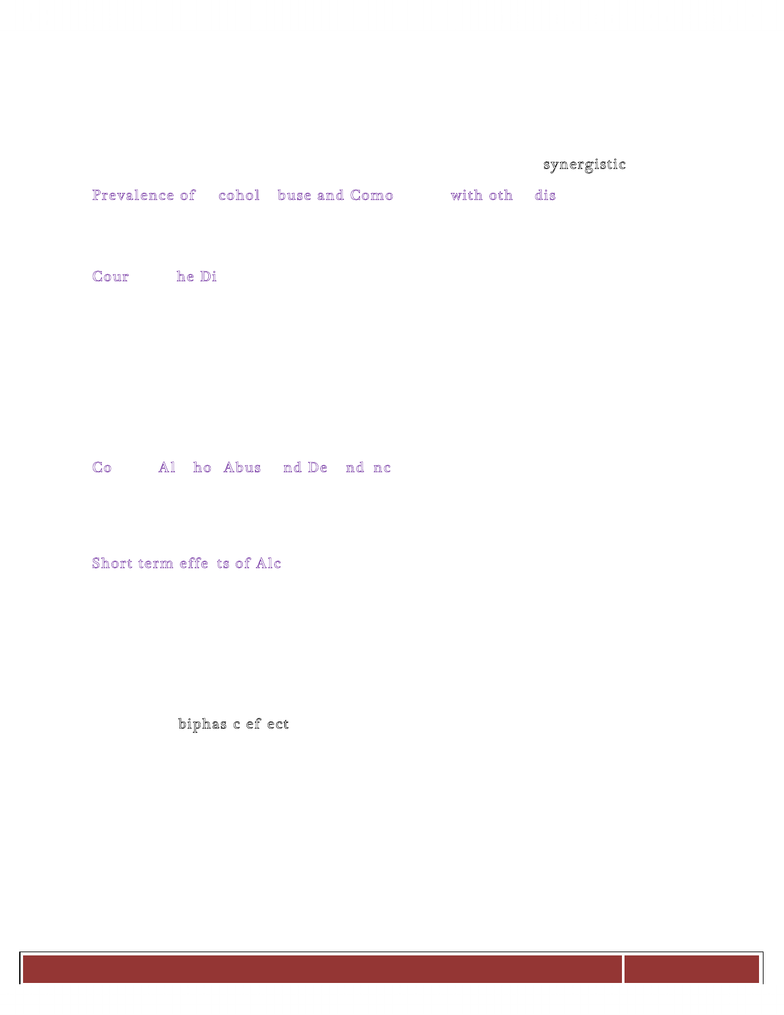 Chapter 12: Substance Related Disorders
Page 2
o Alcohol serves as a cue for smoking; smoking is 2x as frequent in situations
where a person is also drinking
o Comorbid with nicotine because nicotine can induce tolerance for the
rewarding effects of alcohol and vise versa
o These cause problem because drugs taken together are synergistic the
effects of each combine to produce an especially strong reaction
Prevalence of Alcohol Abuse and Comorbidity with other disorders
• Prevalence 20% for men and over 8% for women ! declines with age
• Problem drinking is comorbid with mood and anxiety disorders and with other drugs
use and schizophrenia
• It’s a factors in 25% of suicides
Course of the Disorder
• The histories of alcohol dependent people do show a progression from alcohol abuse
to alcohol dependence but data shows considerable fluctuations in drinking patterns
from heavy drinking from some periods of time to abstinence or lighter drinking at
others
• Heavy use of alcohol may be restricted to weekends or long periods of abstinence
may be interspersed with binges of continual drinking for several weeks
• There is no single pattern of alcohol abuse
• This Jellinek’s account doesn’t apply to women. For women the interval between the
onset of heavy drinking and alcohol abuse is briefer than it is for men
• Women with drinking problems tend to be steady drinkers who drink alone and are
more unlikely than men to binge
Costs of Alcohol Abuse and Dependence
• Alcohol abuse is the 4th leading cause of worldwide disability than the use of tobacco
or illegal drugs
• Problem drinkers use health services 4x more than do non abusers, and their medical
expenses are twice as high as those of non drinkers
• Alcohol is associated with many problems, deaths, assaults and accidents
Short-term effects of Alcohol
• Alcohol is metabolized by enzymes after being swallowed and reaching the stomach
• Most goes to the small intestines and is broken mostly by the liver (which can
metabolize about 50%/hour)
• The excess quantities stay in the bloodstream
• Absorption of alcohol is rapid but removal is always slow
• The effects of the drug vary with the level of concentration of the drug in the
bloodstream, which in turn depends on the amount ingested in a particular period of
time, the presence or absence of food in the stomach to retain the alcohol and reduce
its absorption rate, the size of a person’s body and the efficiency of the liver
• It has biphasic effect which means the initial effect of alcohol is stimulating – the
drinker experiences an expansive feeling of sociability and well-being as the blood-
alcohol levels rises- but after the blood-alcohol level peaks and begins to decline,
alcohol acts as a depressant that may lead to negative emotions
• Motor coordination, balance, speech, and vision is also impaired
• Large doses can cause sedation, sleep and even death
• Alcohol stimulates GABA receptors, which may be responsible for reducing tension,
it also increases the level of serotonin and dopamine (pleasurable effects)
• Alcohol also inhibits glutamate receptors; which may cause the cognitive effects of
alcohol intoxication (slurred speech and memory loss)
• People who actually drink alcohol also report increased sexual arousal, even though
alcohol actually lowers physiological arousal (which may be caused by cognition)
www.notesolution.com
Unlock document 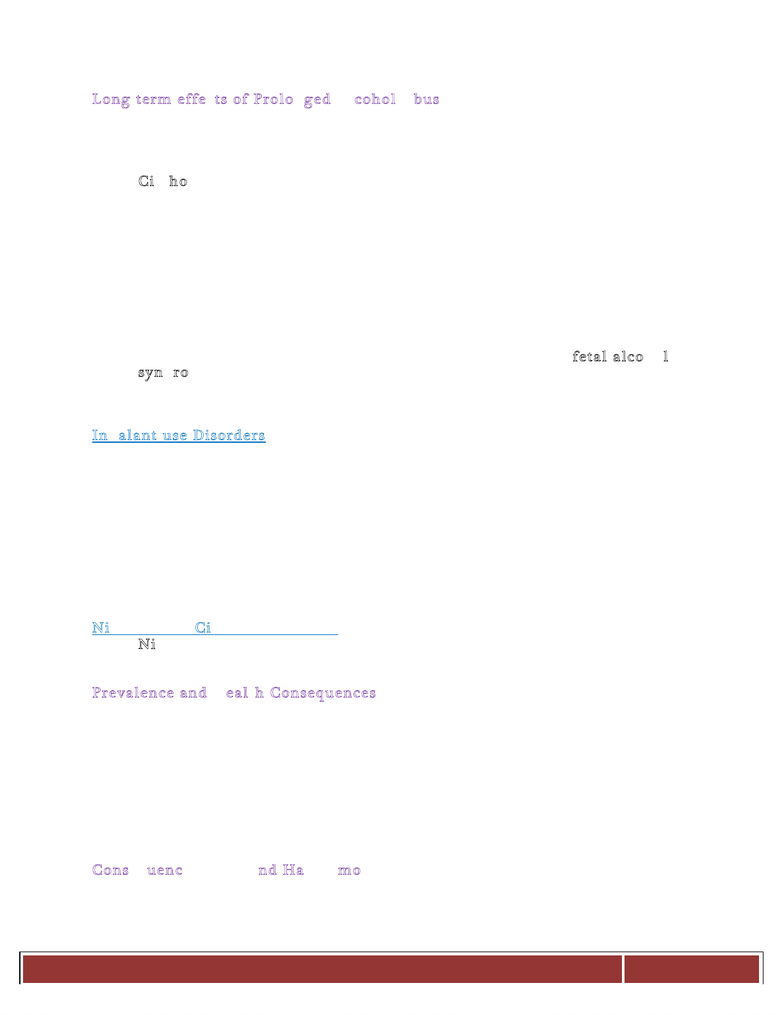 Chapter 12: Substance Related Disorders
Page 3
Long-term effects of Prolonged Alcohol Abuse
• Almost every tissue and organ of the body is affected adversely by prolonged
consumption of alcohol ! malnutrition may be severe
• In older chronic alcohol abusers, a deficiency of B-complex vitamins can cause
amnestic syndrome, a severe loss of memory for both recent and long-past events
• Cirrhosis (some liver cells become engorged with fat and protein, impeding their
function; some cells die- triggering the inflammatory process) of the liver is caused
by prolonged alcohol use with reduced protein
• Damage to the endocrine glands and pancreases, heart failure, hypertension, stroke,
and capillary haemorrhages, which are responsible for the swelling and redness in
the face (nose)
• Prolonged use of alcohol appears to destroy brain cells
• Reduces effectiveness of the immune system and increases susceptibility to infection
and cancer
• Women’s risk of breast cancer increases steadily with drinking
• Heavy alcohol during pregnancy causes mental retardation (the growth of the fetus
is slowed, and cranial ,facial and limb abnormality are produced) -- fetal alcohol
syndrome
• Some say that light amounts of alcohol may actually have its physiological gains but
it’s still a controversy
Inhalant use Disorders
• An alarming number of young people begin their substance abuse by inhaling such
substances as glue, white-out correction fluid, spray paint, cosmetics, gasoline,
household aerosol sprays and the nitrous oxide found in spray cans of whipped cream
• Peak age of inhalant use is 14-15 years of age (initial onset as young as 6)
• Involves behaviours such as sniffing, huffing and bagging
• Most inhalants act as a depressant and can be seen as similar to alcohol and sedatives
• End up feeling euphoria and psychic numbing, but inhalants can cause damage to
the CNS too
• Hallucinations, memory problems and dizziness can also occur
• Nausea and subsequent headaches are experienced eventually in almost all cases
Nicotine and Cigarette Smoking
• Nicotine is the addicting agent of tobacco; it stimulates receptors called nicotinic
receptors in the brain ! stimulates the dopamine neurons in the mesolimbic area
(involved in producing the reinforcing effects of most drugs)
Prevalence and Health Consequences
• Smoking has caused more than 45 000 deaths annually in Canada
• Health risks for smoking are significantly less for cigar and pip smokers because
they seldom inhale the smoke into their lungs, but cancer of the mouth are increased
• Risks ! lung cancer, emphysema, cancer of the larynx and of the esophagus, and a
number of cardiovascular disease
• The most harmful components of smoke from burning tobacco are nicotine, carbon
monoxide and tar; the latter consists primarily of certain hydrocarbons, including
known carcinogens
• Smoking decline greatly after 10 years after quitting
• Students smoke the most when not living at home but not compared to US students
Consequences of Second-Hand Smoke
• The smoke coming from the burning end of a cigarette contains higher
concentrations of ammonia, carbon monoxide, nicotine and tar than does the smoke
www.notesolution.com
Unlock document

Chapter 12: substance-related disorders: the pathological use of substances falls into 2 categories, substance abuse, substance dependence presence of at least 3 of the following. the person develops tolerance, indicated by larger doses of the substance being needed to produce the desired effect or the effects of the drug becoming markedly less if the usual mount is taken. withdrawal symptoms (negative physical and psychological effects when they stop taking it) the person uses more of the substance or uses it for a longer time than intended. the person recognizes excessive use of the substance, he/she may tried to reduce usage but has been unable to do so. much of the person"s time is spent in efforts to obtain the substance or recover from its effects. substance use continues despite psychological or physiological problems caused or exacerbated by the drug.

To date, there is no universally effective, long-term psychological treatment for antisocial personality disorder (or psychopathy specifically). In many cases, particularly when a psychopath or an individual with APD commits a violent crime, confinement is the only form of long-term management. What ethical concerns with this come to mind, if any? Should society explore other methods to treat/manage psychopathy, or is confinement a reasonable approach in violent circumstances?

11. During dinner one evening, Arial mentions that she just read in a popular magazine that a particular herbal substance improves memory. She's very excited about trying this supplement in hopes that it might improve her grades. Sitting across the table from her, Juan is skeptical. He begins to ask her about such things as the nature of the evidence regarding the herb's effectiveness and how big the memory improvement effect is supposed to be. Juan's behavior is most consistent with which of the following concepts discussed in the text? A) Gestalt psychology B) functionalism C) British empiricism D) critical thinking E) A & C are both correct