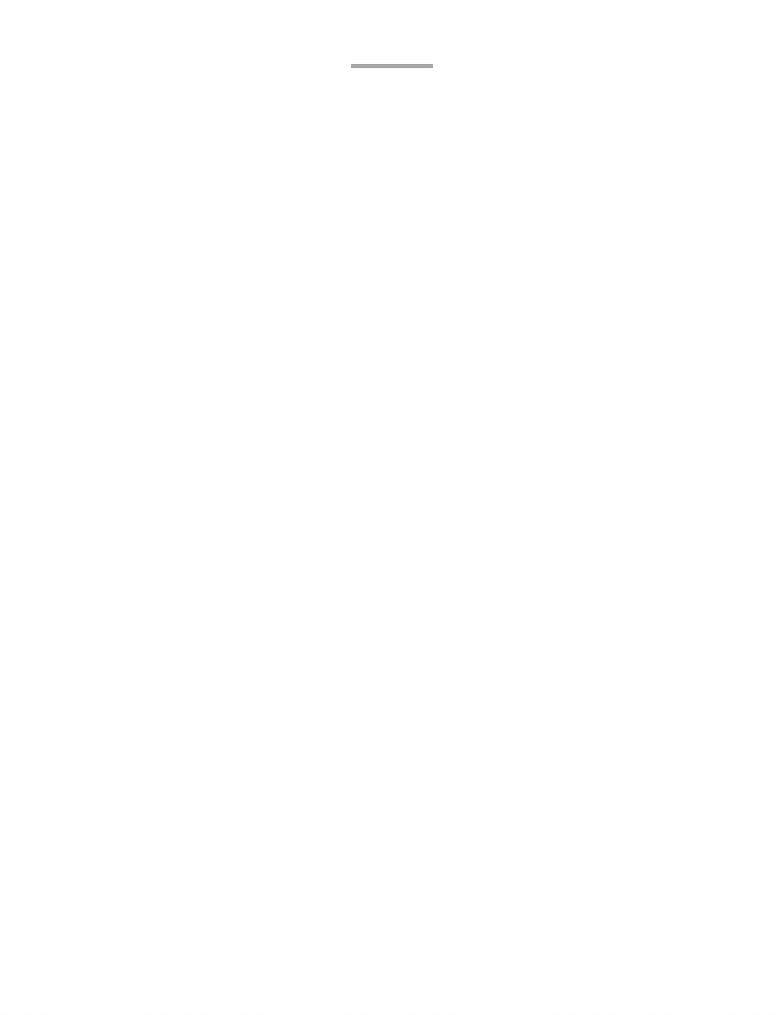 Language
It is important to define language precisely and, in particular, to distinguish between language and
communication. Although language is often used as a communication system, there are other
communication systems that do not from true languages.
A natural language has two necessary characteristics: It is regular (governed by a system of rules,
called a grammar), and it is productive, meaning that infinite combinations of things can be
expressed in it.
Other characteristics of human languages include arbitrariness (the lack of a necessary
resemblance between a word or sentence and what it refers to) and discreteness (the system can be
subdivided into recognizable parts – sentence into words, words into sounds.
THE STRUCTURE OF LANGUAGE
Different languages have different sounds (called phonemes). The study of ways in which
phonemes can be combined in any given language constitutes the study of phonology. Next, you
have to put the sounds together in some coherent way, identifying the meaningful unites of
language, an aspect known as morphology.
Word endings, prefixes, tense markers, and the like are critical parts of each sentence
Some of the morphemes (smallest meaningful units of language) are words, and you also need to
identify these and to determine the role each word plays in a sentence.
To do so, you need to determine the syntax, or structure, of each sentence.
Semantics is the branch of linguistics and psycholinguistics devoted to the study of meaning.
Finally, for a conversation to work there must be some flow or given-and-take.
Listeners must pay attention and make certain assumptions, and speakers must craft their
contributions in ways that will make the listener’s job feasible. This aspect of language,
pragmatics.
Linguistic rules make up the grammar of the language and, taken together, define the way a
language works. It is important that linguists and psychologists use the term grammar in a very
restricted sense here, meaning “the set of rules for a language.”
In particular, grammatical in this context has nothing to do with the “rules” of “good English.” To a
linguist or a psycholinguist, the sentence “I ain’t going to happily do it” is perfectly meaningful and
“legal” – that is, it follows the “rules” of English that native speakers observe – and is therefore
grammatical.
Here grammar refers not to polite ways of speaking but to ways of speaking that form intelligible
phrases or utterances recognizable as examples of language that a native speaker of the language
might produce.
Linguists and psychologists distinguish between people’s explicit and implicit knowledge of
linguistic rules. It is doubtful, that most of us could state with precision or accuracy just what the
rules for English syntax are. Still, most of us can easily and almost immediately detect violations
of rules. Not only would we recognize the example as ungrammatical, but we would never produce
such violations
Our knowledge of the rules is therefore not explicit (we cannot articulate what all the rules are, nor
are we consciously aware of all of them) but implicit (whatever the rules are, we somehow follow
them).
We can often articulate the so-called prescriptive rules (“Don’t say ain’t”), which tells us how we
should talk or write, even though we may violate them. In contrast, we find it hard to articulate
the descriptive rules of English, which characterize which sentences are legal and which are not.
Linguists and psychologists also distinguish linguistic competence from linguistic
performance. The term competence refers to the underlying linguistic knowledge that lets people
www.notesolution.com 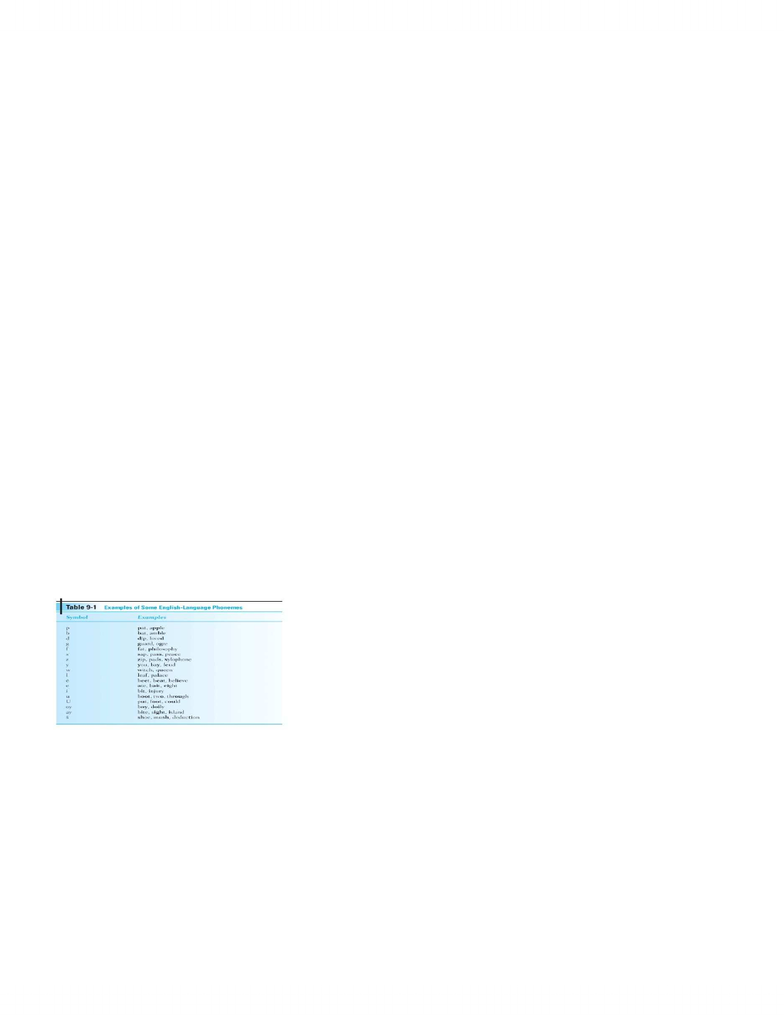 produce and comprehend their language. Competence is not always fully evident in actual use or
performance of language.
Linguistic performance would reflect linguistic competence only under completely ideal conditions.
In real life, such ideal conditions are never achieved.
When overhear an ungrammatical utterance, it is probably not that the speaker’s linguistic
knowledge (competence) is faulty (especially speaking in his/her native language) but rather that
various other factors and pressures in his/her life at the time he spoke (performance) caused the
error to errors.
Phonology
Phonetics, the study of speech sounds and how they are produced, and phonology, the study of
the systematic ways in which speech sounds are combined and altered in language.
The English language has about 40 phonetic segments (sometimes called phones). Although a
language may have a large number of phones, only certain ones are “meaningful” to it.
Linguists use the term phoneme to refer to the smallest unit of sound that makes a meaningful
difference in a given language. If one phoneme in a word is exchanged for another, the word itself is
changed.
Linguists and phoneticians distinguish between consonants and vowels, Vowels work without
obstructing the airflow, simply depending on the shape and position of the tongue and lips.
Consonants are more complicated. In general, they are phonemes made by closing part of the
mouth. They differ first in what linguists call “place of articulation,” meaning where the
obstruction of the airflow occurs. Consonants differ also in “manner of articulation,” the mechanics
of how the airflow is obstructed. A third distinction between groups of consonants is known as
voicing.
Features of phonemes are involved in certain phonological rules that govern the ways in which
phonemes can be combined. It also explains how to pronounce new words and how to pronounce
prefixes and suffixes to words, such as plural or past-tense endings.
Different languages have different phonological rules; hence there are two answers to the question,
why do different languages sound different? One answer is that they contain different sounds
(phonemes). A second answer is that they have different rules for combining those sounds
(phonology).
Syntax
The term syntax refers to the arrangement of words within sentences or, more broadly, to the
structure of sentences – their parts and the way the parts are put together
Syntactic rules, similar to phonological rules, govern the ways in which different words or larger
phrases can be combined to form “legal” sentences in the language.
Syntactic rules should meet two requirements: They should be able to describe every “legal”
sentence, and they should never be able to describe an “illegal” sentence.
EX. The poodle will chase the red ball.
oTy to divide the words of this sentence into groups (linguists call these constituents).
Certainly the word poodle goes with the word the. Similarly, red appears to modify ball, and
the forms another constituent with red ball. Chase could also form a constituent with the
red ball, and will seems to modify this larger grouping.
www.notesolution.com 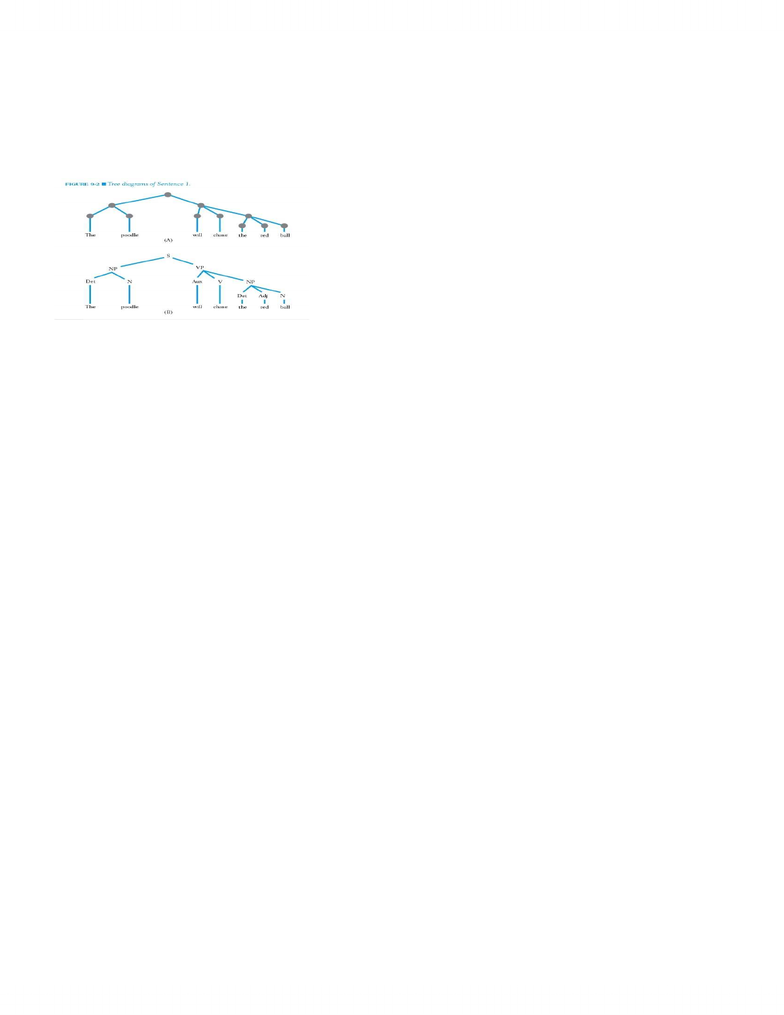 oThis type of diagram is called a tree diagram, and the small grey circles, called nodes,
depict the various constituents of the sentence.
oV for verb, N for noun, Adj for adjective, and NP is noun phrases
oThe labeling is meant to capture our intuition that these constituents are similar to other
constituents
oThe point of such diagrams is to help explain why certain kinds of changes can be made in a
sentence and other can’t
.
One illustration comes from a change called preposing – taking a certain part of a sentence and
moving it to the front, usually for emphasis.
Preposing works (results in a grammatical or legal sentence) only when certain kinds of whole
phrases or constituents are moved to the front.
How can we concisely summarize what can and cant’s be legally preposed? Linguists do so by
formulating constraints on syntactic rules like this: Only constituents lablled as being whole
phrases – for example, nodes marked as NP or VP – can undergo movement from one position in a
sentence to another. Such rules describe the ways in which parts of sentences are form and work
together.
Various linguists have proposed a variety of syntactic rules, as well as a variety of kinds of
syntactic rules.
For example, Chomsky proposed one set of rules, called phrase structure rules, that functions to
generate the structures depicted in tree diagrams. These rules, sometimes called rewrite rules,
describe the ways in which certain symbols can be rewritten as other symbols. The rule S  NP
VP says that a symbol S (stands for “sentence) consists of different constituents and can be
rewritten as the symbol NP (noun phrase) followed by the symbol VP (verb phrase).
The point is that phrase structure rules allow certain symbols to be rewritten as other
symbols. To rewrite a symbol with an actual word in the English language requires a
different type of syntactic rule, a lexical-insertion rule, which allows the insertion of words
(lexical items) into the structures generated by phrase structure rules
Another type of syntactic rule is transformational rule. Transformational rule turn structures
such as those depicted in tree diagrams into other structures. Preposing phrasal constituents, for
example, might be allowed through a transformational rule.
The point here is to show that just as the sounds of a language are organized and rule-
governed in the way they are combined so too are phrases and sentences.
Rule of syntax, like rules of phonology, are probably not rules you are consciously aware
of. However, the evidence accumulated by linguists and psycholinguists strongly suggests
that you have some access to these rules, because your language behaviour indicates a
great deal of compliance with them and your judgments of grammaticality are remarkably
Semantics
Semantics, the study of meaning, also plays an important role in our language use.
Theories of meaning have to explain several things, at minimum (Bierwisch):
oAnomaly (“Coffee ice crease can take dictation”)
oSelf-contradiction (“My dog is not an animal”)
www.notesolution.com