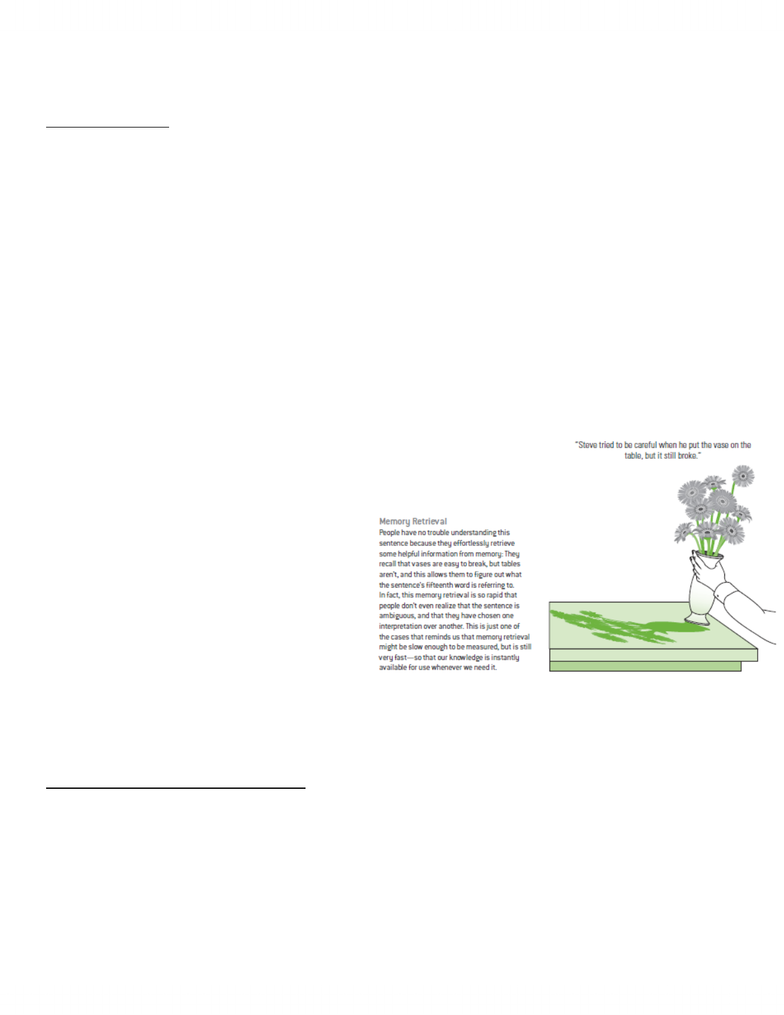 Chapter 8 - Associative Theories of Long-Term Memory
- Memory search is aided by connectison b/w material to be learned and the things one already knows?
- What are these connections, and what does the travelling?
The Network Notion
- Memory connectison provide more thn retrieval paths – connectsion are our memories
- Memory is represented by a memory ceonnection – a connection b/w some memory content representing things
and some memory content representing the sound pattern of “_____”
How Might the Network Work?
- Essence of memory netwok is straightforward
- Need some means of representing individual ideas – nodes w/I the network, just like the knots w/I a fishermans
net (Natin-knot, nodus), are tied to each other via connectsion called association/associative links (like nodes –
cities on map, association-highways that link the cities)
- Not all association are of equal length
- How do these memory connectios get established? Ideas become linked only if during the learning episode the
learner pays attention to the items to be remembered – some active intellectual engagements is neded to create the
connectison, the nature of this engagement is crucial
Spreading Activation
- A node becomes activated when it has receive a strong enough input signal (like energy or fuel) and the
associative links are like activation carriers
- Nodes receive activation form their neighbours, and as more and more activation arrives at a particular node, the
activation level
- The activation level will reach the node’s
response threshold – the node fires (as several
effects)
- Activation levels below the response threshold, so-
called subthreshold actvation, have an important
role to play: Activation is assumed to accumulate, so
that 2 subthreshold inputs may add
together/summate and bring the node to threshold
- If a node has been partially activated recently, it is
already “warmed up” so that even as weak input
will be sufficient to bring the node to threshold
- Almost like neurons
- They key idea is activation travels from node to
node via the associative links, as each node
becomes activated and fires, it serves as a source
for further activation, spreading onward through the network
- Spreading activation allows us to deal w/ a key issue
- If you start at 1 node, how do you decide where to go from there? You do not choose at all, activation spreads out
form its starting point in all direction simultaneously, flowing through whatever connectsion are in place
Evidence Favouring the Network Approach
- This sketch leaves a great deal unspecified, but that is deliberate: associative nets can be implemented in various
ways
Hints
- Why do hints help us to remember?
i.e. what is the capital of South Dakota? And given the hint Is is perhaps a man’s name
South Dakota will activate the nodes in memoyr that represent your knowledge about this state
Activation will spread outward form these nodes to the “capital city”
- Is it possible that there is only a weak connection b/w SOUTH DAKOTA nodes and the nodes representing
“Pierre”
Unlock document 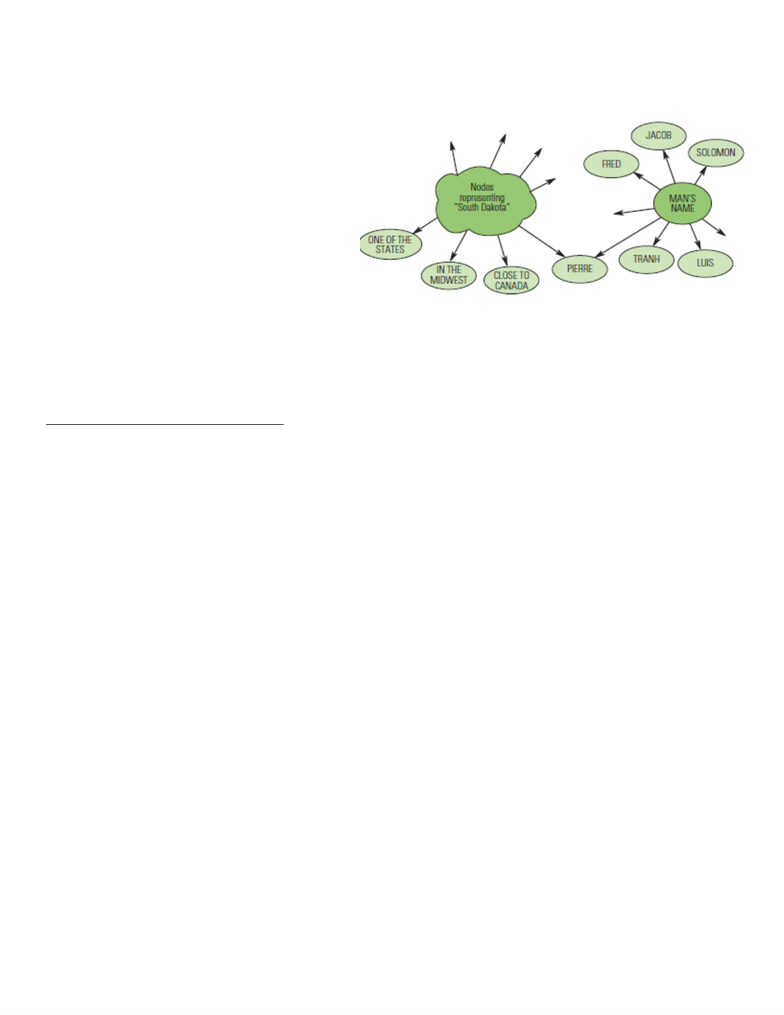 If you are told, “South Dakota’s capital is also a man’s name”, this will activate MAN’S NAME node, and os activation
will spread out from the source at the same tie that activation is spreading out form the SOUTH DAKOTA nodes
Nodes for “Pierre” will now receive activation form 2 sources simultaneously
Context Reinstatement
- The logic is the same as it was in our discussion
of hints
- Imagine a list of words, including “pointer”
while underwater. If asked later on, “What words
wer eon the list?” activation will flow outward
From the nodes representing your general
thoughts about the list. Enough of this activation
will reach the POINTER nodes to activate them,
but erhaps not. If you are underwater at the time
of tth rest, then this will trigger certain thoughts,
and we just suggested that the nodes
representing these thoughts may be linked to the nodes representing the learned material – including the POINTER
nodes As a result, the POINTER nodes will be receiving a double inpute: They’ll receive activation form the nods
representing thorugh about the list and also form the nodes representing the underwater thoughts
DOUBLE INPUT = More likely that POINTER nodes wil be activated, leading to the memory advantage that we
associate w/ context reinstatement
More Direct Tests of the Network Claim
- Network proposal provides a natural way to bring together the evidence presented – importance of connections –
and the proposal now before us simply develops this idea – by being a bit more precise about what connections
and how they work
Spread of Activation and Priming
- Associative network is subthreshold activation can accumulate, so that insufficient activation received from 1
source can add to the insufficient activation received form another source – heart of proposal for why hints work
and why context reinstatement helps memory
- More direct evidence is lexical-deicision task – research participants are shown a series of letter sequences on a
computer screen, some of the sequence spell words; other sequences are letter strings that are words (i.e. blar,
plome, tuke). Participants hit a “yes” button if the sequence spells a word and a “no” button otherwise. They
perform this task by “looking up” these letter strings in their “mental discovery: and they base their response on
whether they find the string in the disctionary or not. We use particpant’s speed of response in this task as an index
of how quickly they can locate the word in their memories
i.e. participants see related pair (i.e. bread and butter). To choose a response, they need to lookup the word bread
in memory to activate the relevant nodes and repeat for another word. The nearby words will includes BUTTER
since association is strong. When a participant turns to the second word in the pair, the participants find this word
and know that this string is a woed = hit “yes” button
Prediction is correct – particpants’ lexical-decision responses were faster by 100 ms if the stimulus words were
related
Sentence Verification
- When you serach through the network, activation spread form node to node  like travel and so farther one must
travel and be longer
i.e. Collins and QUillian (1969) used sentence verification task – participants shown sentences on a computer
screen (“A robin is a bird” or “A robin is an animal”). Mixed together are true and fake sentences (i.e. “A cat is a
bird”) Particpants hit “true” or “false” button as quick as they could. People perform this task by travelling through
the network and seek connection b/w nodes – associative path (i.e. b/w ROBIN and BIRD). The travel will require
more time if the 2 nodes are connected only indirectly  slower responses
There is not point in storing in memory the fact that cats have hearts – it would be more efficient just to store the
fact that these various creatures are animals – property “has a heart” would be associated with ANIMAL node
rather than nodes of individual animal
Unlock document 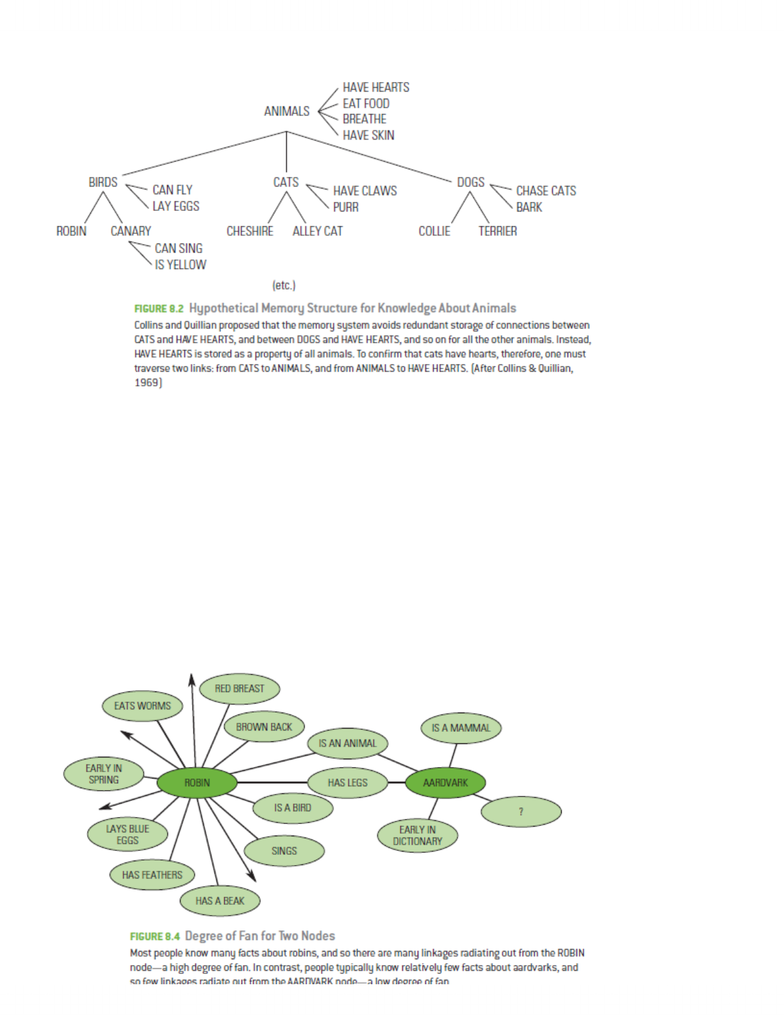 - Response times depend heavily on the number of associative steps that must be traversed to support a response;
some connections are quicker than others (i..e “A robin is a bird” than “A peacock is a bird”)
Degree of Fan
- The speed of hunting through memory is also influence by another factor – the nodes’ degree of fan
- Thin about your knowledge, robins and knowledge of aardvarks – you know more about robins than aardvarks,
and so there are more association form ROBIN than AARDVARK  ROBIN has high degree of fan
- Once a node is activated  activation will spread from there, quantity of activation is limited so each of the links
only gets its “share” of the whole
- If each link receives less activation, each will carry less to the neighbouring nodes  slow down rate at which
those neighbours are activated and slow down memory search
- 1 researcher had participant memorize set of sentences about people in locations (i.e. “The doctor is in bank”;
“The fireman is in the park”). Variables were changed – some actors appeared in 1 location, some locations
contained 2 – the study controlled the degree of fan from the nodes representing each of these terms
Once participants memorized the sentences, they were given recognition test to decide as quickly as possible
whether each of the test sentences had been presented
- Reponse times were fastest when 1 sentence mention to a specific person or place; response times were slowest
when multiple sentences named a specific person or place)
Unlock document