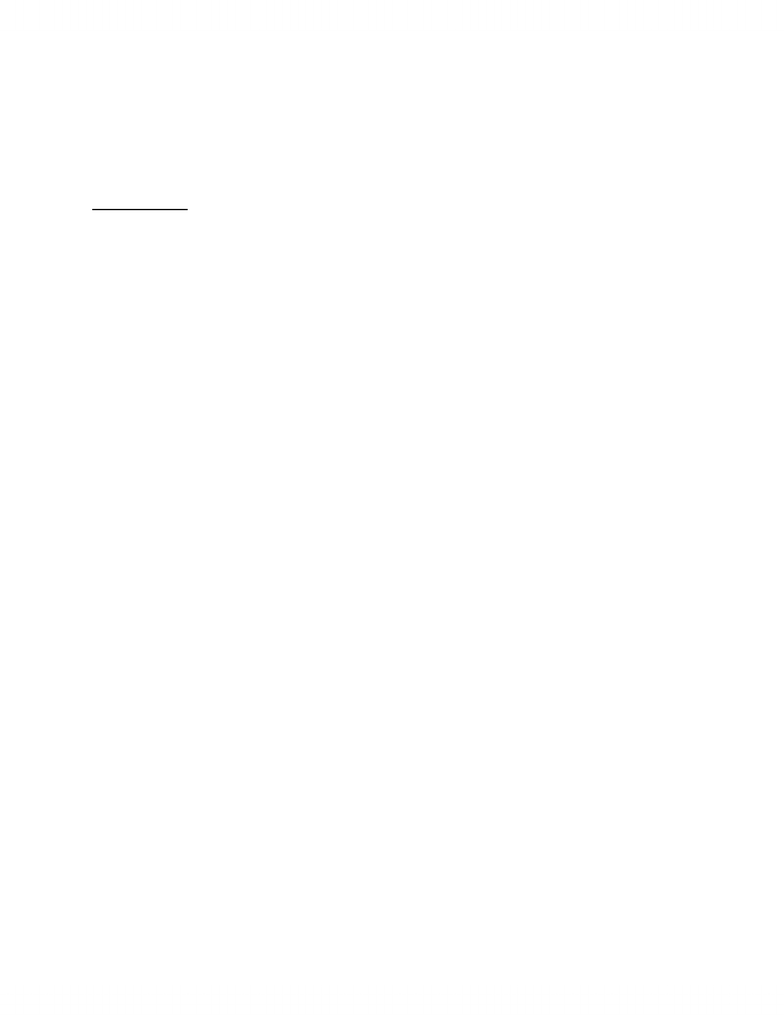 Chapter 11 – visual knowledge
 People describe their thoughts in a variety of ways: 1) in words, 2) in an abstract form – a
sequence of ideas that lacks any concrete form, and 3) in a sequence of pictures, or
sounds, or other sensory impressions
Visual Imagery
 How many windows are there in your house? You call to mind a “map” of your house
and count the windows by inspecting this map
 Many people even trace the map in the air by moving their finger around, following the
imagined map‟s contours
Introspection About Images
 Among the earliest imagery researcher was Francis Galton – he asked various people to
describe their images and to rate them for vividness
 He asked subjects to introspect (or “look within”) and to report the mental contents
 Subjects reported that they could “inspect” their images much as they would inspect a
picture
 In their images, scenes were represented as if viewed from a certain position & a certain
distance
 They also reported that they could “read off” from the image details of colour & texture;
this is consistent with the informal way of describing mental images as “pictures in the
head”, to be inspected with the “mind‟s eye”
 Many described images of photographic clarity and rich in detail; other reported very
sketchy images or no images at all – they were able to think about the scenes or objects,
but cannot “see” them
 Do individuals differ in the nature of their mental imagery?
 These self-reports shouldn‟t be taken at face value
 Perhaps all of his subjects had the same imagery skill, but some were cautious in how
they chose to describe their imagery, while others were more extravagant
 Galton‟s data might reveal differences in how people talk about their imagery rather than
differences in the imagery per se
Chronometric Studies of Imagery
 To gain more objective data, experimenters ask people to do something with their images
– to read information off of them or to manipulate them in some way
 Chronometric study: “time-measuring” study; a study that measures how accurate and
how fast people are in their responses
 Chronometric studies gives us an accurate portrait of mental imagery than a self-report
 Chronometric studies allow us to ask what sorts of information are prominent in a mental
image and what sorts are not; we can then use these evaluations as a basis for asking how
“picture-like” mental images are
 What information is included & what information is prominent, depends on the mode of
the presentation 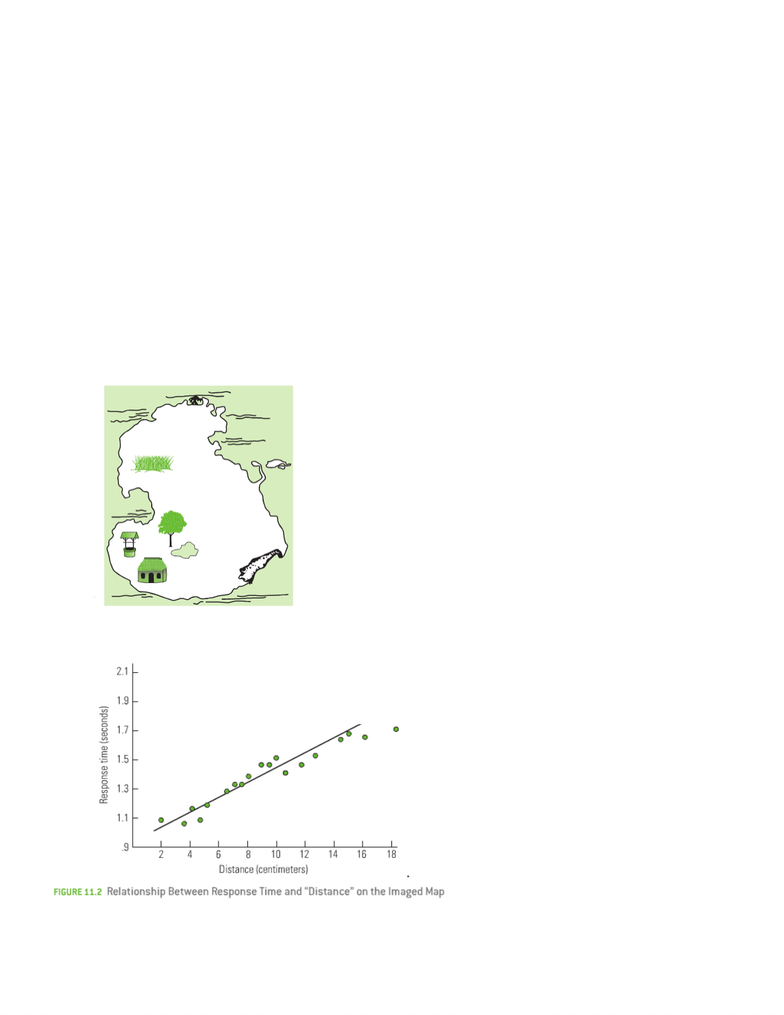 1) Description – the features that are prominent will be those that are distinctive and
strongly associated with the object
o When asked to write a description of a cat, we are likely to mention the
distinctive features of cats – whiskers, claws, and so on
o We will not include the fact that cats have heads (because it is too obvious)
2) Depiction – distinctiveness and association won‟t matter; size and position will
determine what is prominent and what is not
o When asked to draw sketch of cat, the cat‟s head would be prominent because
the head is relatively large and up front
o Claws and whispers might be less salient, because these features are small and
would not take up much space in the drawing
 Self-reports about imagery indicate a picture-like (depiction) representation
 People have the option of thinking about cats via imagery and also the option of thinking
about cats without imagery; as the mode of representation changes, so does the pattern of
information availability
 This experiment is an example of an image-scanning procedure
o Subjects first memorized this map, including the various
landmarks (the hut, the well, the patch of grass, and so on)
o Subjects were asked to form an image of the island, and to
point their “mind‟s eye” at a specific landmark (the hut)
o Another landmark (the well) was then mentioned
o Subjects were asked to imagine a black speck moving in a
straight line from the 1st landmark to the 2nd
o When the speck “reached” the 2nd landmark, subjects
pressing a button, stopping a clock
o This provides a measure of how long it takes to scan from
the hut to the well
o “Scanning times” for each of the various pairs of
landmarks were recorded
 There is a clear relationship between “travel time” and “travel
distance” 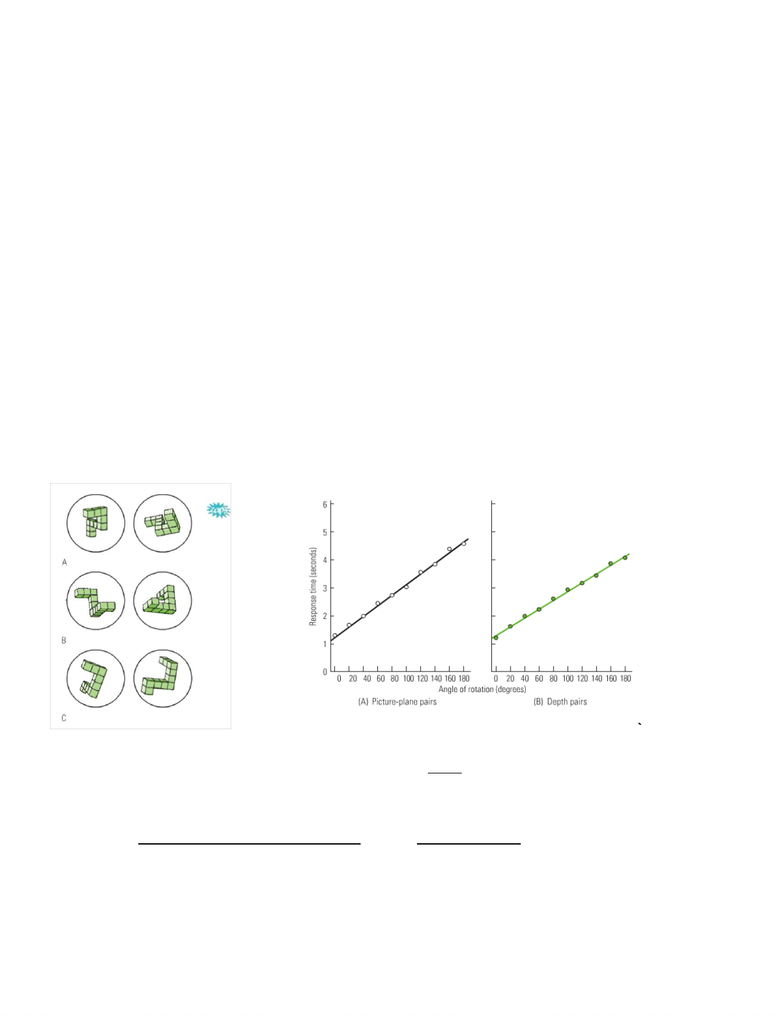  Subjects scan across their images at a constant rate, so that doubling the scanning
“distance” doubles the time required for the scan, and tripling the distance triples the time
required
 Similar results are obtained if subjects are given a task that requires them to “zoom in” on
their images or a task that requires them to “zoom out”; response times are directly
proportional to the amount of zoom required
 Images preserve the spatial layout of the represented scene
 Images represent information about all the shapes and sizes within the scene, and it will
also preserve a diverse set of spatial relationships (relationships such as one point being
between two other points, or aligned with other points)
 Thus, images directly represent the geometry of the scene, allow images to depict
the scene rather than describing it
Mental Rotation
 Subjects were asked whether displays (look below) showed two different shapes or just
one shape viewed from two different perspectives
 Mental rotation task: a process that subjects seem to use in comparing one imaged form
to another; to make the comparison, subjects seem to imagine one form rotating into
alignment with the other, so that the forms can be compared
 The number of time it takes depends on how much rotation is needed
 Imagined “movement” resembles actual movement: the farther one has to image a form
rotating, the longer the evaluation takes
 People have no trouble with mental rotation in depth; they make very few errors (with
accuracy levels around 95%); the data resembles those obtained with picture-plane
rotation
 In both, (2-D) picture-plane and (3-D) depth pairs, there is a clear relation between
angle of rotation and response times, and the speed of rotation seems similar for both
 Visual images are not mental picture; they are more like mental s
Avoiding Concerns About Demand Character

You call to mind a map of your house and count the windows by inspecting this map. Many people even trace the map in the air by moving their finger around, following the imagined map s contours. Among the earliest imagery researcher was francis galton he asked various people to describe their images and to rate them for vividness. He asked subjects to introspect (or look within ) and to report the mental contents. Subjects reported that they could inspect their images much as they would inspect a picture. In their images, scenes were represented as if viewed from a certain position & a certain distance. Many described images of photographic clarity and rich in detail; other reported very sketchy images or no images at all they were able to think about the scenes or objects, but cannot see them. These self-reports shouldn t be taken at face value.