CANCER
 Cancer is a disease in which uncontrolled division of cells occur due to
mutation in cell and this individual mutant clone of cells grows and evolve at
the expense of its neighboring cells destroying the entire cellular society.
 Cancer cells have two distinctive features:
 The have the ability to bypass the cellular systems that control the
division and growth of the cell
 They have the ability to invade other tissues and spread through out
the body
 A cell that grows and undergo uncontrolled rounds of division (proliferates)
give rise to neoplasm or tumor.
 A tumor which does not invade other tissues and is confined to one site is
called benign tumor.
 A tumor that has the ability to invade the surrounding tissues is termed
malignant tumor.
 True cancer is malignant.
 Malignant tumors invade blood or lymphatic vessels and form secondary
tumors at other sites in the body. This process is called metastases.
Unlock document 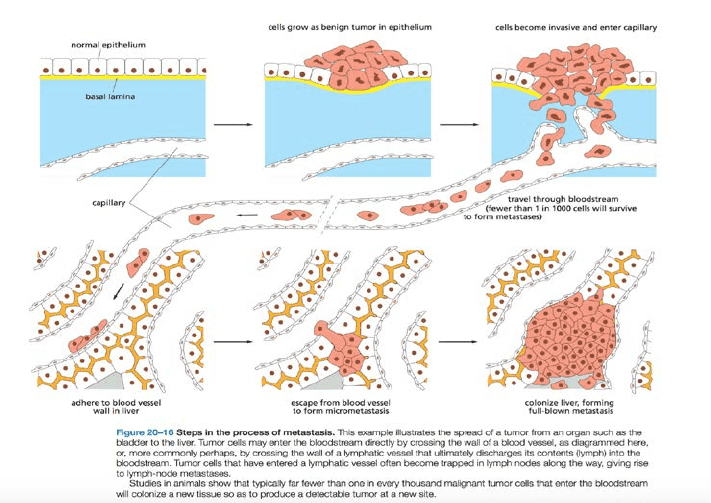  Cancer is classified on the basis of tissue and cell type in which it arises.
 About 80% cancers arise from epithelial cells, they are termed as
carcinomas.
 Cancer of connective tissue and muscles is called sarcomas.
 Cancer of cells of nervous and white blood cells are characterized as
lymphoma and leukemia, respectively.
 A benign epithelial tumor with glandular organizations termed as adenoma
while its malignant form is termed adenocarcinoma
 Chondroma is a benign tumor of cartilage.
 Molecular analysis of tumor chromosome can help trace the origin site of
cancer termed the primary tumor.
 Translocation between the long arms of chromosome 9 and 22 is termed
Philadelphia chromosome and is the distinguishing feature of white blood
cells with leukemia.
 Most cancer cells contain mutations in somatic cells and not in the germ
cells.
Unlock document

Already have an account? Log in
 Cancer is a genetic disease as somatic mutations alter the DNA sequence
of the cell and passes this mutation to its progeny.
 The generation of cancer is called carcinogenesis and is directly linked to
production of change in DNA, which is termed mutagenesis.
 A compound that causes cancer is called carcinogen.
 Two critical external carcinogens are:
 Chemical carcinogen which cause local change on nucleotide
sequence
 Radiations: X rays and UV rays.
 X rays cause chromosomal breaks and translocations.
 Ultraviolet rays alter a specific nucleotide base.
 Xeroderma pigmentosum, a cancer of skin is caused by UV light damage
of DNA repair system.
 In humans, every single gene may undergo mutations on about 1010 different
occasions due to limitations in the accuracy of cell division and repair
systems.
 A single mutation is not enough to turns a cell into cancerous cells.
 Development of a cancer requires a significant number of independent,
rare genetic and epigenetic accidents to occur in the lineage that originate
from a single cell.
 The gradual accumulation of mutations in different genes that gradually
changes an initial mild disorder of cell into a vigorous cancer, is termed
tumor progression.
 At each stage of tumor progression, the cancer cell requires a mutation or
epigenetic change that can give the growing tumor a selective advantage
over the body cells a well as the sub clones of cancerous cells. This process
is called natural section and provides a genetic diversity to cancer.
 Cancer cells accumulate genetic changes at an abnormally high rate and
are said to be genetically unstable.
Unlock document