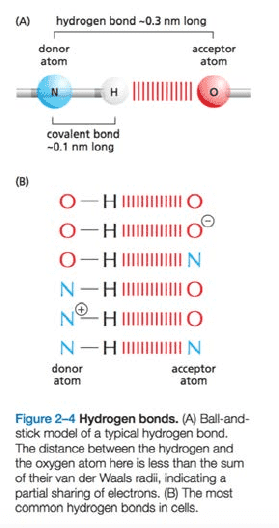 2. CELL CHEMISTRY AND BIOENERGETICS
• Carbon, hydrogen, nitrogen and oxygen constitute about 96.5 % of an
organism’s weight.
• Cells, which are the basic unit of life, are composed of 70% water.
• The atoms of the elements are help together by covalent bonds, which are
about 100 times stronger than the thermal energies present within the cell.
• Two different molecules are held together by weak bonds termed as
noncovalent bonds.
• The attraction between a positively charged region of one water molecule
(one of its H atoms) approaches a negatively charged region (the O) of a
second water molecule, results information of a hydrogen bond.
• Hydrogen bond is a special form of polar interaction in which an
electropositive hydrogen atom is shared by two electronegative atoms.
• Hydrogen bonds are much weaker than covalent bonds and are easily
broken by the random thermal motions that reflect the heat energy of the
molecules.
• Many hydrogen bonds that link water molecules together, make water liquid
at room temperature, with a high boiling point and high surface tension,
rather than a gas.
• Molecules that carry charge interact favorably with water and are considered
as water loving. Such molecules are termed hydrophilic. They include
Unlock document 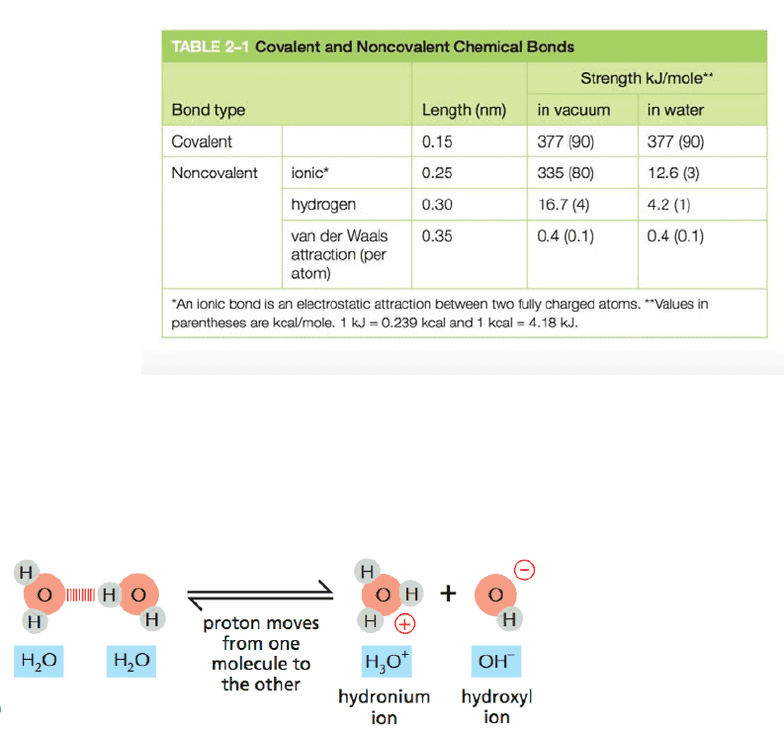 sugars, DNA, RNA, and most proteins.
• Molecules that are uncharged form few or no hydrogen bonds, and so do
not dissolve in water. They are termed hydrophobic. Hydrocarbons are an
important example.
• There are four types of non-covalent attractions that help bring molecules
together in cells. They are
 Ionic bonds (Electrostatic attractions)
 Hydrogen bonds
 van der Waals attractions
 Hydrophobic force
• H+ (proton) can easily dissociate from its original water molecule and
associate with the oxygen atom of another water molecule, generating a
hydronium ion (H3O+) and hydroxyl ion.
• The concentration of H3O+ is expressed using a logarithmic scale called the
pH scale.
• Pure water has a pH of 7.0 and is said to be neutral. It is neither acidic (pH
<7) nor basic (pH >7).
Unlock document 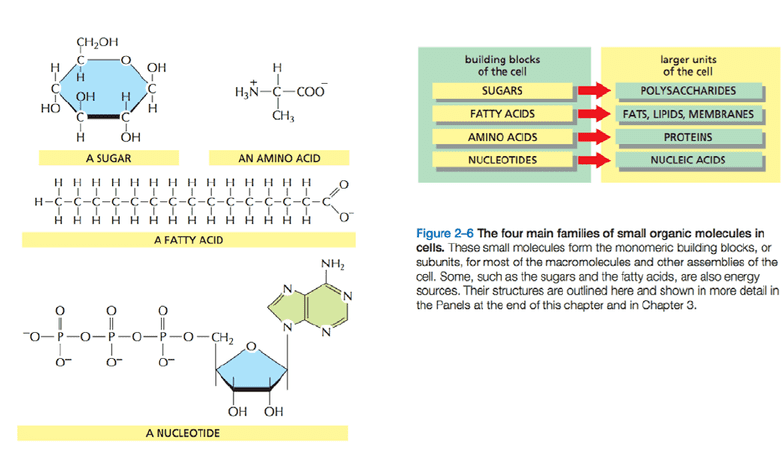 • Weak acids and bases release or take up protons near pH 7, keeping the
environment of the cell relatively constant under a variety of conditions. Such
solutions are called buffers.
• The backbone of cell is organic as it is mainly made of carbon compounds.
• There are four major families of small organic molecules in the cell. They
are:
 sugars
 fatty acids
 nucleotides
 amino acids (Figure 2–6)
• The most abundant carbon containing molecules in the living cells are
termed as the macromolecules.
• The macromolecules in cells are polymers that are constructed by
covalently linking small organic molecules called monomers, into long
chains (Figure 2-8).
Unlock document