Chapter all: How Cells Read the Genome

6. How Cells Read the Genome: From DNA to Protein
From DNA to RNA - Transcription
- Transcription is the name given to the process of producing RNA
molecules using DNA as guide.
- The enzymes that perform transcription are called RNA polymerases.
- RNA polymerases make about one mistake for every 104 nucleotides
compared with an error rate of about one in 107 nucleotides for DNA
polymerases.
- RNAs display some differences compared to DNA: RNAs have
ribonucleotides in their composition instead of deoxyribonucleotides;
RNAs contain the base uracil (U) instead of thymine (T); and RNAs are
single-strand molecules.
- There are different types of RNAs: coding RNAs and noncoding RNAs.
Example of coding RNA is the messenger RNA (mRNA), which codes for
proteins. Noncoding RNAs comprise molecules that can perform
enzymatic, structural and regulatory functions. Examples of these are:
ribosomal RNA (rRNA), transfer RNA (tRNA), small nuclear RNA
(snRNA), small nucleolar RNA (snoRNA), microRNA (miRNA), small
interfering RNA (siRNA), piwi-interacting RNA (piRNA) and long
noncoding RNA (lncRNA).
- Prokaryotes have a single type of RNA polymerase while eukaryotes
have three types: RNA polymerase I, RNA polymerase II and RNA
polymerase III – each one is responsible for the transcription of specific
subsets of genes.
- Bacterial RNA polymerase associates with a transcription-initiation factor
called sigma (σ) factor to form the RNA polymerase holoenzyme, which
binds DNA in a special region called the promoter to start transcription.
RNA elongation continues until a second region called terminator is
reached by the polymerase complex, which consists of a string of A-T
nucleotide pairs and a sequence that will form hairpin structures.
Unlock document

- In eukaryotes, RNA polymerase II is responsible for transcribing the
majority of genes. Several transcriptional factors act in order to help RNA
polymerase to position correctly in the promoter region, to open the
double-strand of DNA and release the interaction with the promoter to
allow elongation.
- The promoter region in bacteria is quite diverse while in mammalian cells
it is known to be composed of T and A nucleotides. For this reason, this
sequence is known as the TATA sequence, or TATA box. The TATA box
is typically located 25 nucleotides upstream from the transcription start
site.
- The RNA polymerase creates superhelical tension as it moves along a
stretch of DNA that is anchored at its ends. This tension is removed by
the action of DNA topoisomerase.
- During the elongation phase of transcription, the nascent RNA undergoes
three types of processing events: a special nucleotide is added to its 5'
end (capping), intron sequences are removed from the middle of the RNA
molecule (splicing), and the 3' end of the RNA is generated (cleavage
and polyadenylation). Each of these processes is initiated by proteins that
travel along with RNA polymerase II by binding to its C-terminal tail.
Unlock document 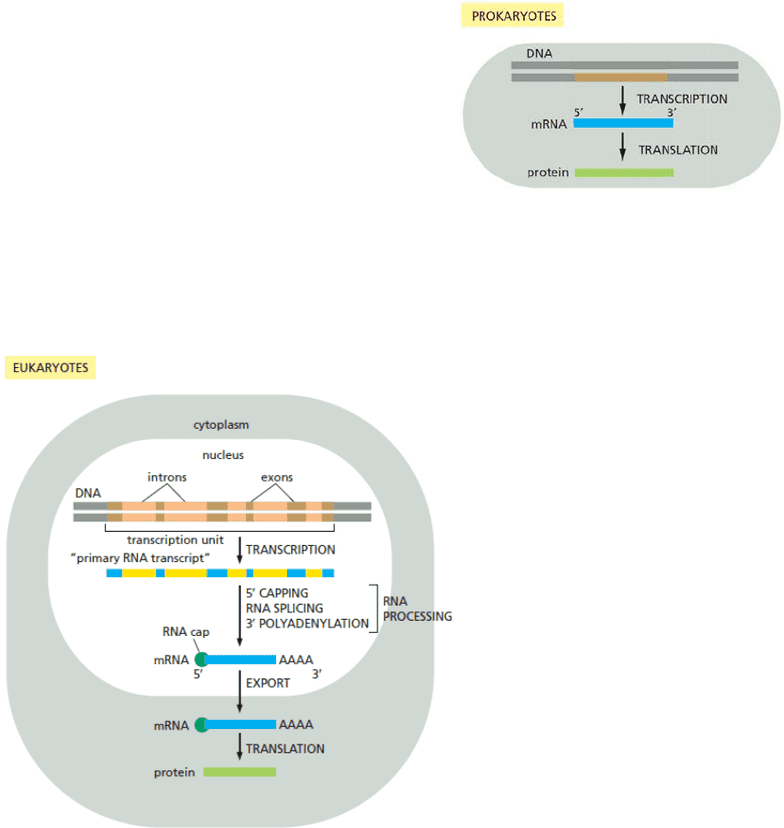 - The 5' cap consists of a modified guanine nucleotide and the 3' end of
approximately 200 adenine (A) nucleotides added by the poly-A
polymerase. These special ends allow the cell to assess whether both
ends of mRNA molecules are present before it exports the RNA from the
nucleus to the cytosol to be translated.
- Nonsense-mediated mRNA decay is the most powerful mRNA
surveillance system that eliminates defective mRNAs before they move
away from the nucleus.
Unlock document