CHAPTER 14 - CONTROL OF GENE EXPRESSION
Chapter Introduction
- As the egg cell continues to divide, specialized cells are produced that are tailored for specific
functions in various parts in the body (i.e. Vision in the eye, muscle cells)
- The cells that are differentiated all share the exact same DNA, however regulation of how these
genes are expressed determines a cell’s function
- All cells in the nucleus of an embryo contain the same set of genes
-The presence or absence of products that are produced from the expression of genes explain the
functional and structural differences in various types of cells
- Genes that are more likely to be actively transcribed are often considered to be “turned on”
14.1 - Regulation of Gene Expression in Prokaryotic Cells
- Sugars (i.e. lactose) are often more available in the intestinal tract which is an aquatic
environment, while genes that code for enzymes are needed to metabolize this source of energy,
which must be turned on
- Amino acids are also present, so enzymes must function to turn the gene expression off
i. 14.1a - The Operon Is a Unit of Transcription
- During any metabolic process, several genes must be regulated
- An example is the 3 proteins that code for lactose metabolism by E. coli
- When these 3 proteins are present, transcription is active; while when these 3 proteins
are absent, the opposite occurs
- Jacob and Monod proposed the operon model which regarded gene expression control
for lactose metabolism in E. coli
- The operon model is also applicable to bacteria and viruses that attack bacteria,
regarding regulation of gene expression
- Operon  A cluster of prokaryotic genes and the DNA sequences involved in their
regulation.
- In the promoter region, RNA polymerase begins the process of transcription
- An operator is considered to be a binding sequence for a regulatory protein
- Operator  A DNA regulatory sequence that controls transcription of an operon.
- Regulatory protein  DNA-binding protein that binds to a regulatory sequence and
affect the expression of an associated gene or genes
- Genes that are separate from an operon encode for a regulatory protein
- Operons are sometimes controlled by a repressor
- Repressor  A regulatory protein that prevents the operon genes from being expressed.
- It also reduces the likelihood of transcription occurring in that gene
- Operons are also sometimes controlled by activators, which are another type of
regulatory protein that binds to DNA and increases the likelihood of transcription
- Activator  A regulatory protein that controls the expression of one or more genes.
- Operons are often controlled by more than one regulatory mechanism, while various
activators/repressors can control 1+ operon
find more resources at oneclass.com
find more resources at oneclass.com
Unlock document 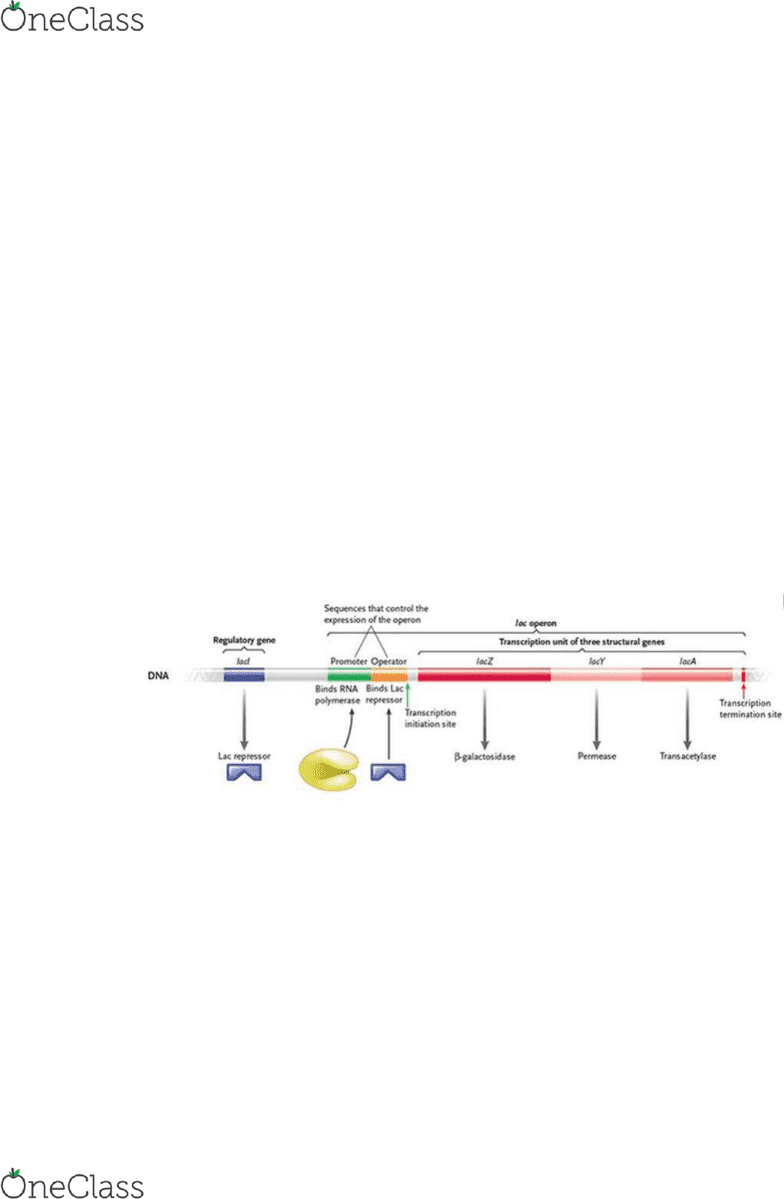 - Each operon is transcribed into a single mRNA from the promoter, which results in
mRNA that is composed of codes for many proteins
- The genes that form a cluster and are transcribed into mRNA are known as a
transcription unit
- Transcription unit  A region of DNA that transcribes a single primary transcript.
- Ribosomes translate mRNA and make each protein that is encoded in that mRNA
- The proteins that are encoded by the genes in the operon, typically catalyze the steps in
the same process of transcription, similarly to enzymes in a biochemical pathway
ii. 14.1b - The lac Operon for Lactose Metabolism Is Transcribed When an Inducer
Inactivates a Repressor
- Studies show that metabolism of lactose in regards to an energy source involves three
genes: lacY, lacZ, and lacA
- They are ordered on the chromosome as Z-Y-A
- These genes are transcribed into mRNA, which starts with the lacZ gene; the
transcription promoter is upstream of the lacZ gene
- This gene encodes for ß - galactosidase, which aids in the conversion of lactose, the
disaccharide sugar into the monosaccharides sugars galactose and glucose
- Enzymes further metabolize these sugars and produce energy using the Kreb’s cycle
and glycolysis
- The lacY gene encodes for a permease enzyme that actively transports lactose into a cell
- The lacA gene encodes for a transacetylase enzyme, which functions relevantly to the
metabolism of compounds that are not lactose
- They named these components together, the lac operon
- The name operon was derived from a significant DNA sequence that was discovered for
the regulation of transcription of the operon, which was the operator
- The operator is responsible for controlling the operation of genes that are next to it
- Regarding the lac operon, the operator is located in between the lacZ gene and the
promoter
- These investigators proved that the lac operon is controlled by a protein known as a lac
repressor
- It is encoded by lacI which is close to but a separate section of the lac operon, and is
synthesized when it is active
- When lactose is absent from a medium, the lac repressor binds itself to the operator and
blocks RNA polymerase from binding to the promoter
find more resources at oneclass.com
find more resources at oneclass.com
Unlock document 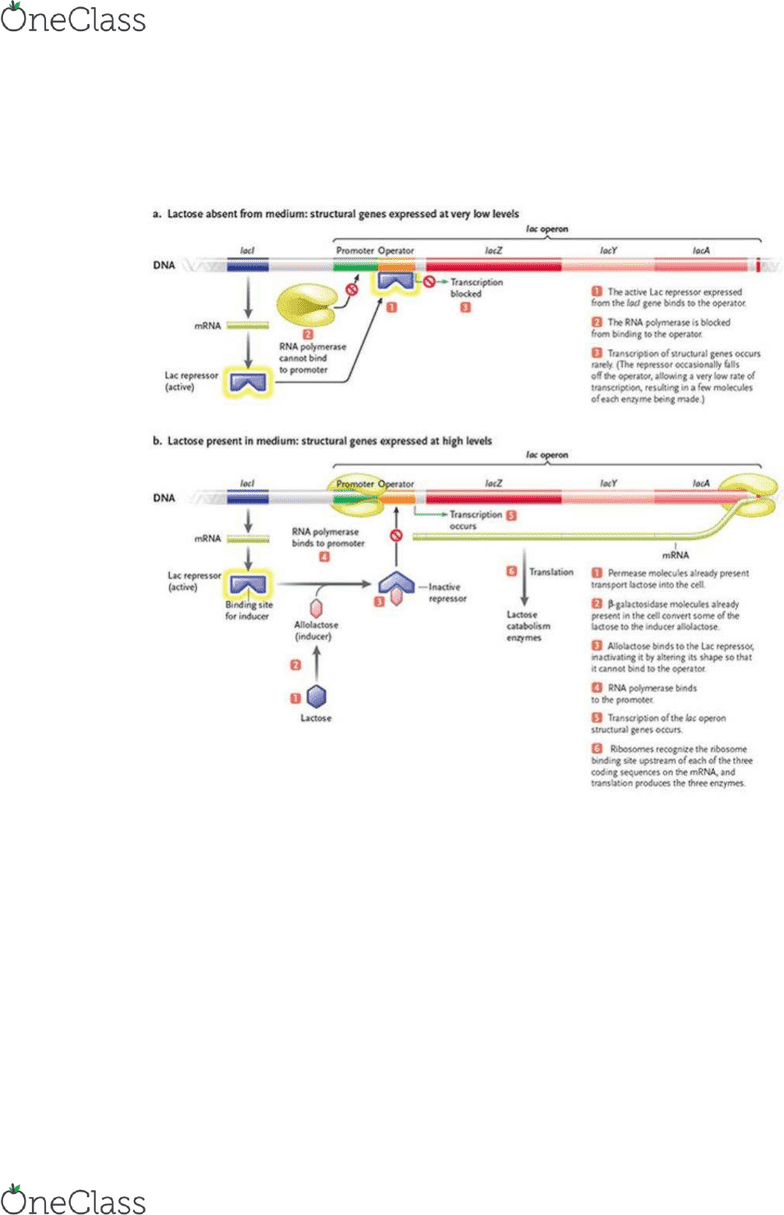 - Repressors often fall off the operator, which allows RNA polymerase to successfully
go through transcription
- This means that there are always a low amount of lac operon gene products located in
the cell
- When lactose is present in the medium, the lac operon turns on and allows the rapid synthesis
of all three enzymes
- Lactose enters the cell and the low levels of ß - galactosidase convert some of the lactose into
allolactose, which is an isomer of lactose
- This induces the lac operon
- Inducer  Concerning regulation of gene expression in bacteria, a molecule that turns on the
transcription of the genes in an operon.
- It binds itself to the lac repressor and changes it shape so that it cannot bind to operator DNA
- This allows RNA polymerase to bind w/ the promoter and transcribe those 3 genes at an
increased rate
- The lac operon is an inducible operon
- Inducible operon  Operon whose expression is increased by an inducer molecule.
- As the lactose is consumed, the regulatory system switches off the lac operon
find more resources at oneclass.com
find more resources at oneclass.com
Unlock document